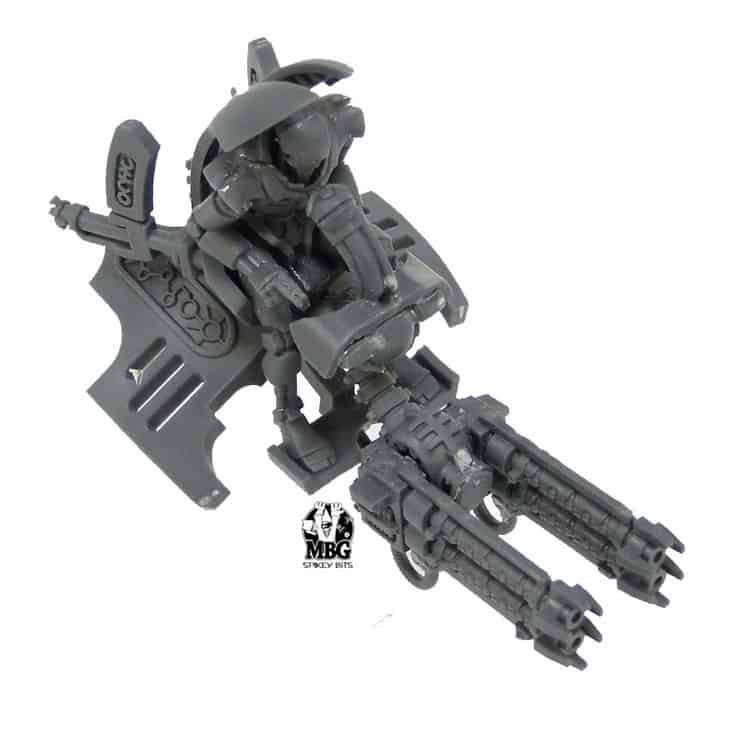 Checkout this new Necron conversion I came up with!

This is my version of the Tomb Blade (based off the artwork), and while its not exact I think it conveys the look and feel pretty good(?)

So first off lets take a look at the art from the book that I based the model on.

Here you can see the tomb blade in motion with its twin Gauss Blasters mounted fore, wing vectors to the side, and bit of a crescent cowl around the pilot. 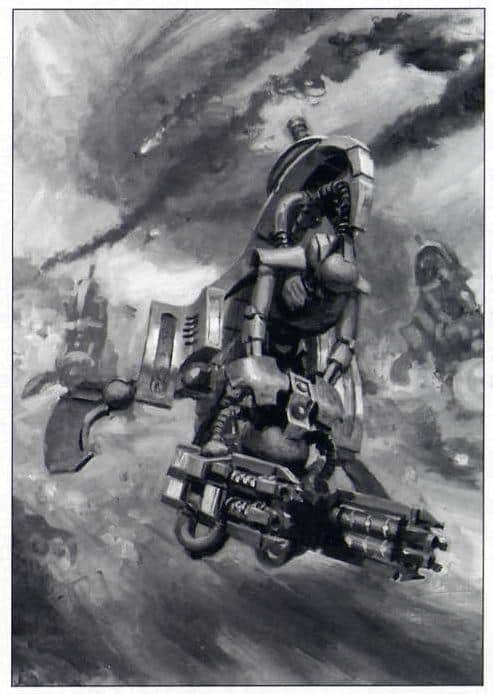 There is also a targeting array called the Nebuloscope that allows the pilot to track targets in HDTV.  Obviously since they are robots, they don’t need things like cockpits, or life-support-  just lots and lots of dubstep, lol.

Below is the list of bits I used for the conversion, with links back to Spikey for the pics.  While I did use bits from quite a few kits on this, you can easily find substitutions for some of the parts to keep the costs down. Which is good, because these things aren’t fielded in ones, and cheaper is better.

So with the artwork  in mind I set about making the base for the Tomb Blade. Originally I wanted to use the Command Barge pilot and assembly, but ended up going with the Ghost Ark steersman and chair because it was “easy”.

I’m sure with a little more creative effort that what I put in, someone could make the Command Pilot and Gunner set work for the whole thing; weapon AND figure mount. That would reduce the overall costs for these, and seems pretty plausible.

So there is a little side challenge for you creative types out there, make that work and send me some pics to share!

How I Made the Model 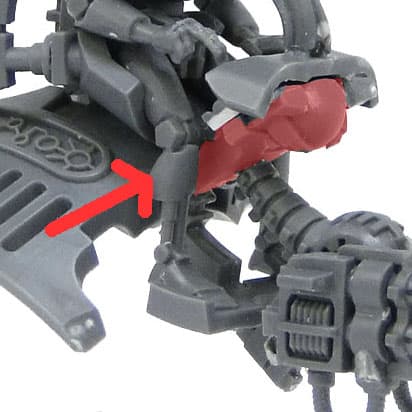 Okay so back to the conversion. To start first off I just took the chair assembly and pinned the base of Command Barge Prow bit to it.  The arrow indicates where the Prow Bit (shaded in red) was pinned.  I had to cut down the prow bit right where the front part starts to curve up, but it’s a very easy cut to figure out. 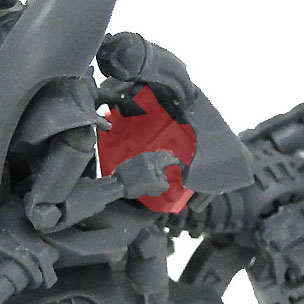 Then I topped the prow bit with the leg rest for the Command Barge pilot, and cut down and re-positioned the panels that attach to the prow bit (again shaded in red) to fit the space created.   Note there are extra fins left over from this bits pack. They can be glued on somewhere to represent the Shield Vanes upgrade. 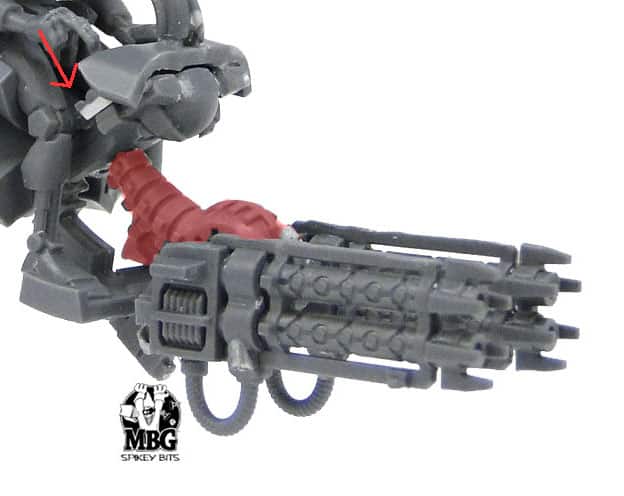 Next I cut down the harness that holds the Command Barge pilots and pinned it to the assembly I just created in the last step (shown by the arrow).

I’m sure you could replace this bit with something if you wanted to, but I had one lying around from making my Cryptek conversion so I put it to use.

Then I cut down and re-positioned two Gauss Blasters from the Immortals kit to make them symmetrical to each other.  They had to mount on each side of the assembly I had just created, and look identical- which was hard cause these were both right handed weapons, lol. But I moved their little coil fins some, and tinkered a bit to make it work. 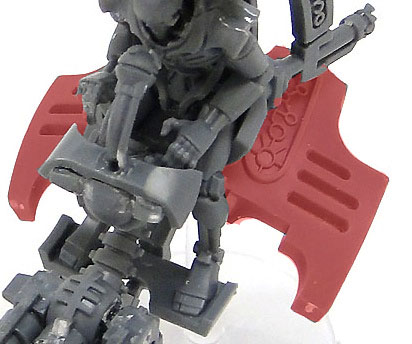 The Command Barge Armor plates attach to each side like shown. I cut the down the rear end of the plates some to fit the shape of the vehicle, but the cut isn’t really set in stone. Just whatever looks good is the key to this project.

I added the pilot from the steersman kit with a alternate head, and some of the Command Barge Pilot arms (the ones that are pushing buttons and such).  Last I took a section of wiring from the Gauss Blasters I cut down and mounted it vertically to make the Nebuloscope targeter.

That’s pretty much it.  Check the Three Sixty below for all the angles!

Don’t forget to checkout my other Necron Conversions too. I have a few more of them on the way as I build up to the big article on my Night/ Doom Scythe model. 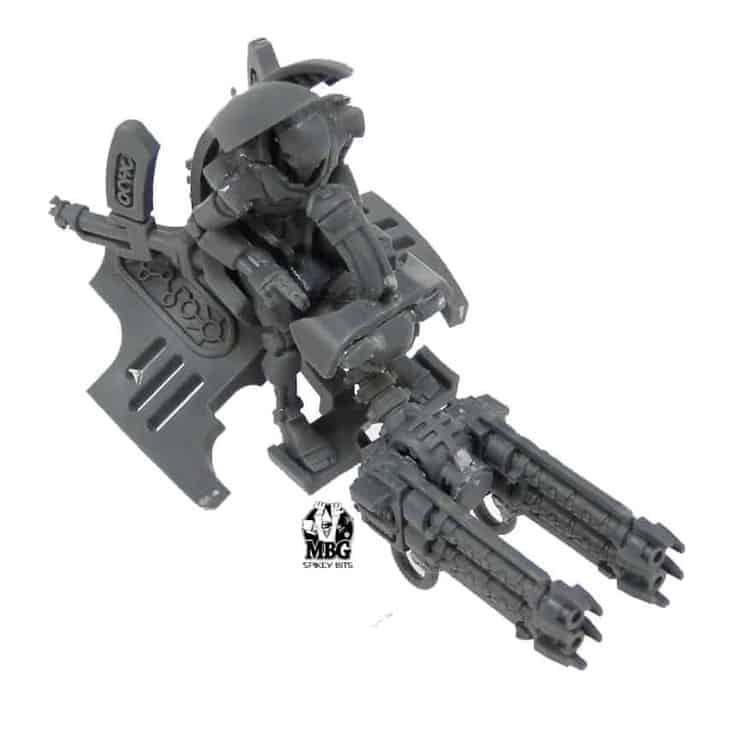 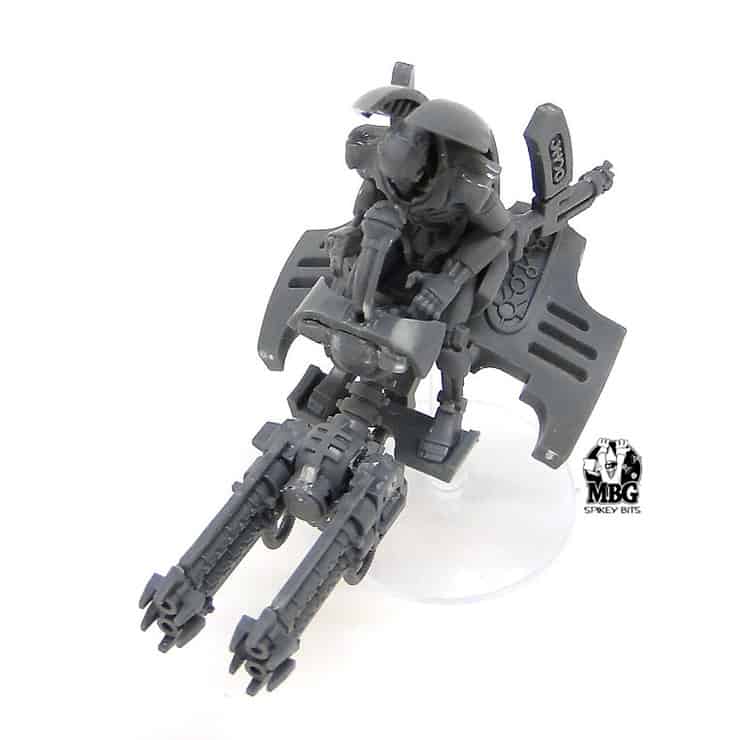 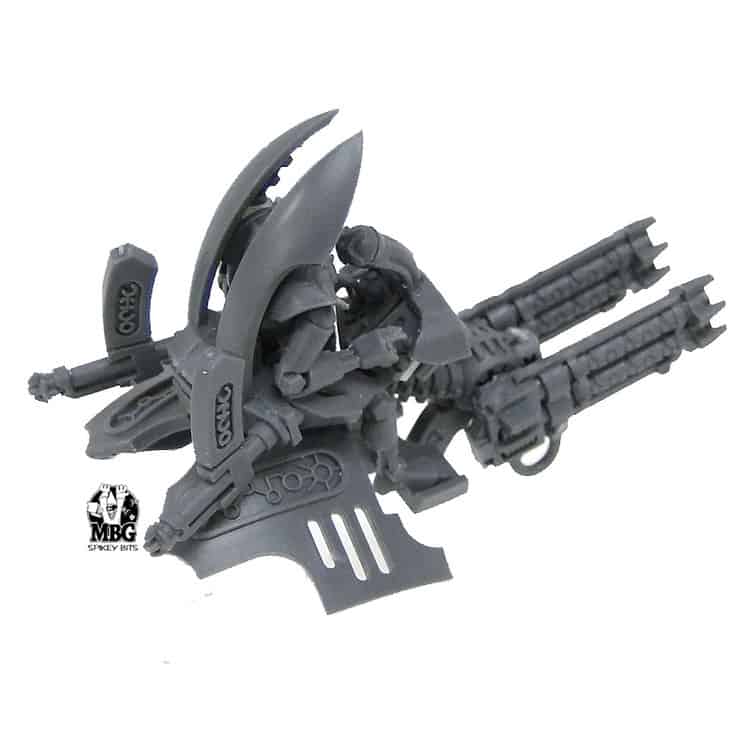 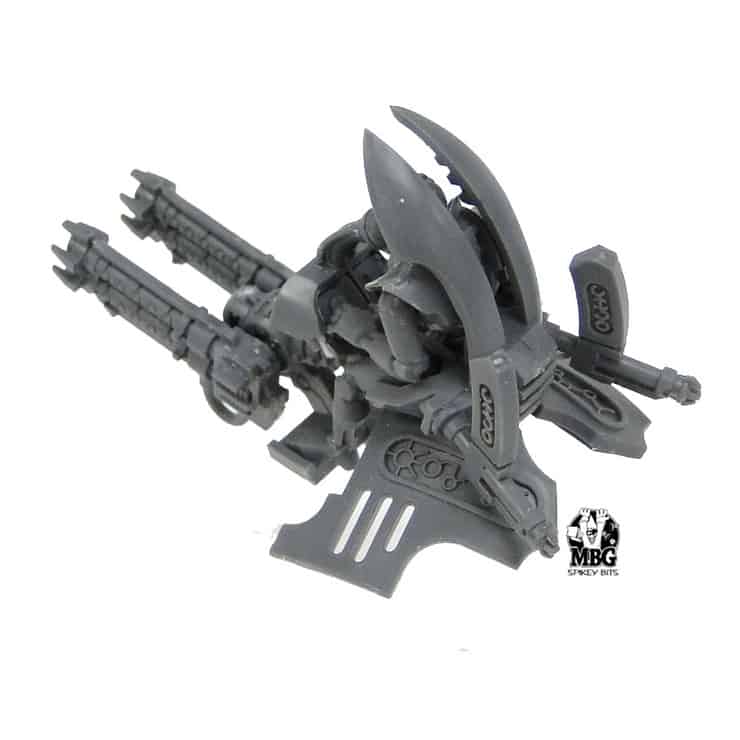 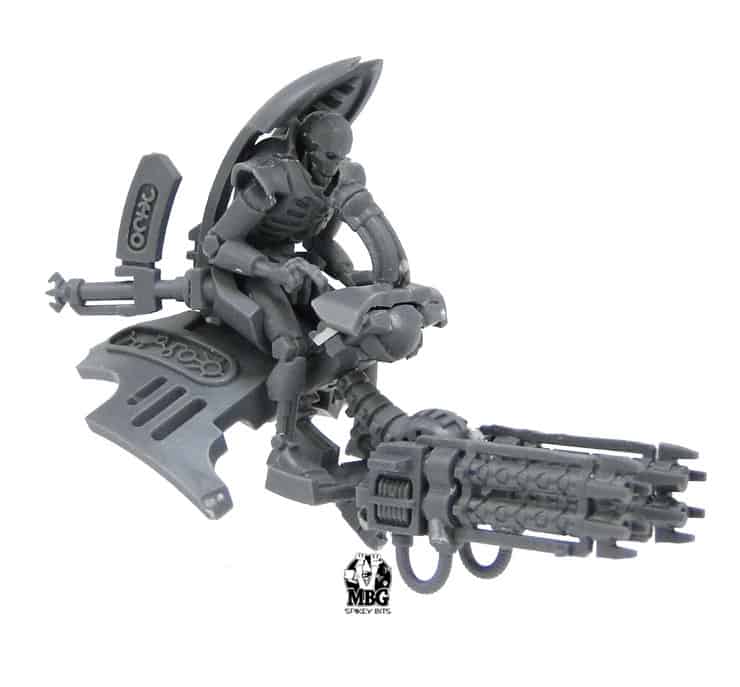 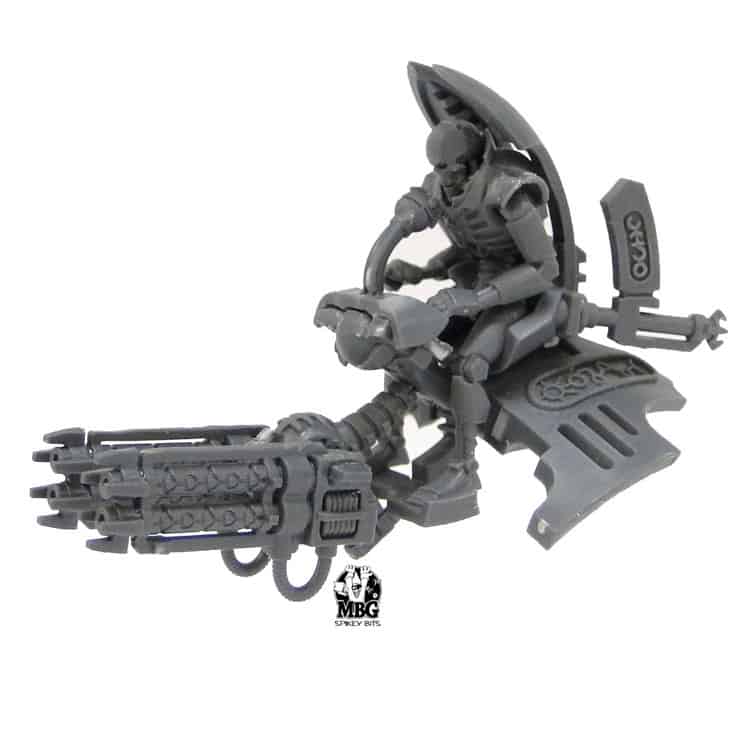 How’s it look compared to the art? Anyone seen any other jetbike conversions out there? -MBG 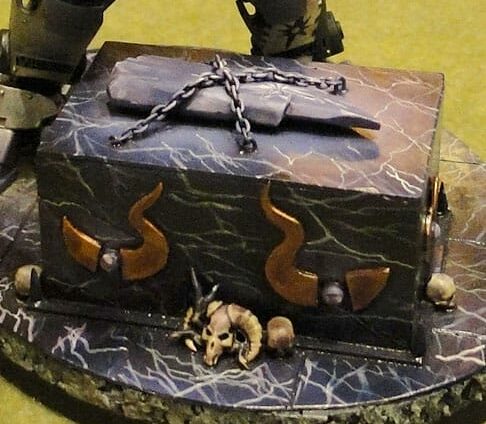 PREV ARTICLE
« Army of One- Whats In the Box? 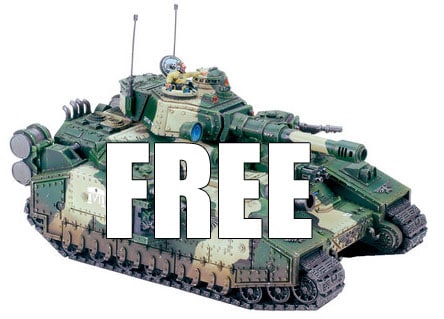 NEXT ARTICLE
TanksGiving Conversion Contest- Vote Now »
If you buy something from a link on our site, we may earn a commision. See our ethics statement.