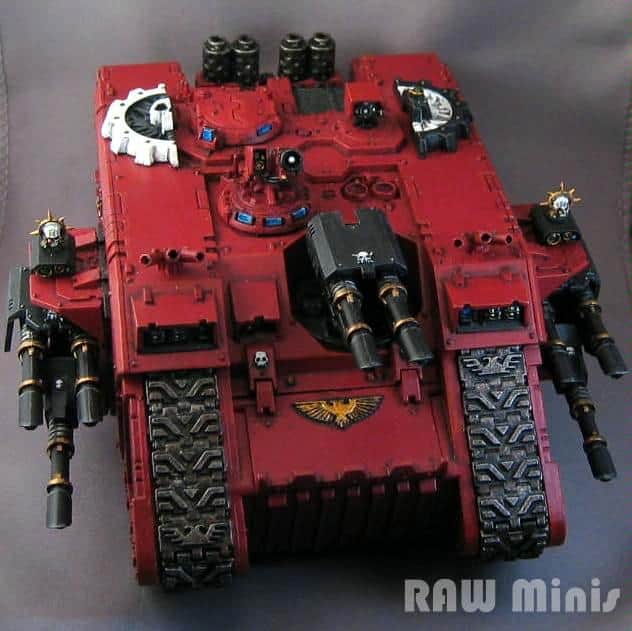 The Land Raider is the longstanding tried and true main battle tank and armored transport of many a Space Marine army.

As a model it’s large and makes a great centerpiece and for gaming it’s heavy armor, firepower and transport ability are largely unmatched even with all the wild new models Games Workshop has added to the range in recent years.

How many Land Raiders are enough? If you’re a hobbyist then sometimes the answer is in the number of variants possible and the limitations of time, space, and budget. In the case of my custom Space Marine chapter four seemed like a good number. These comprise one of each Codex variant and a Warhammer 40,000 Apocalypse variant, the Terminus Ultra.

The Land Raider Terminus Ultra was actually the first model I built with the Mechanicus color scheme and badge. Apocalypse had just been released and I thought it was a cool variant. I hadn’t created my own Space Marine chapter just yet and thought it would be fun to do a Mechanicus theme with the idea that the Adeptus Mechanicus might provide some of these less common heavy firepower resources as support in larger, more epic sized battles and campaigns.

The GW version of the Terminus Ultra kit takes the quick and easy route of having four sponsons, but I didn’t care for that so I opted to convert my single set of sponsons to house both the twin-linked lascannons as well as the single lascannons. 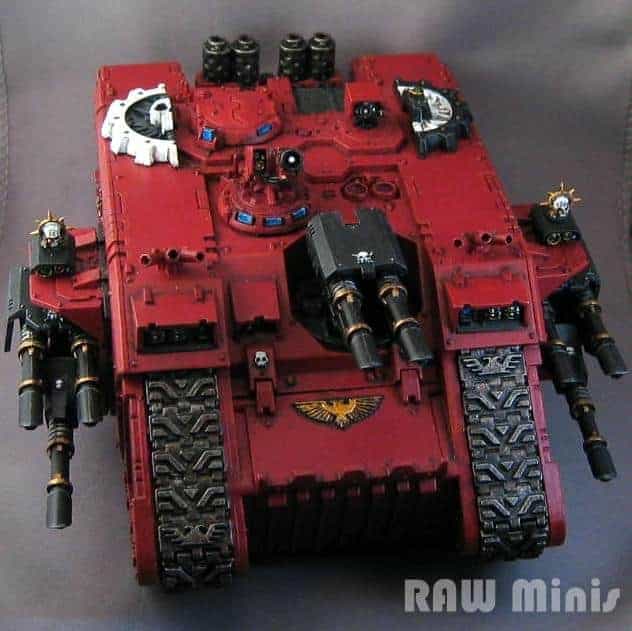 After completing this model I also converted and painted one each of an Arkurian Pattern Stormblade and Shadowsword to this theme. So many people suggested that I do a whole army with this theme that I realized I finally had the idea for the custom Space Marine chapter that I’d been dreaming of doing for about 20 years.

So when the current Space Marine Codex was released the year after 40K Apocalypse I set about creating my own chapter and adding one of each Land Raider variant to it. Of course, I had to do a standard Land Raider using the current kit that’s been around since the year 2000. 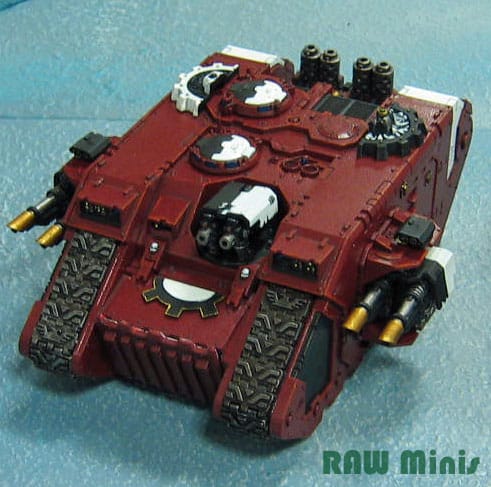 The alternating black and white patterns so often used by GW on Mechanicus themed artwork and model painting made for a simple and striking color scheme for these models and the entire army that goes with them.

Someone on the Dakkadakka forum was kind enough to comment on the photo featured left that my paint scheme is “Very pleasing, clean paint job, good scheme.” That to me is the essence of army painting, especially where large numbers of models are involved. Since this project involved a large number of models I wanted to keep the paint scheme simple enough to do it relatively quickly, yet eye catching enough to still have a certain level of fun and excitement to it.

Some of the time I saved on the simple paint scheme was reinvested in a little converting work. The Mechanicus badges on all of these tanks were liberated from plastic GW Manufactorum kit tiles by carefully hand cutting them out of their background and then precisely sawing them in half. I also hand cut the chapter’s cog symbol for the front door of each tank out of plastic card. The Aquila that was originally on the doors was carefully removed with a chisel point modelling knife.

Chisel point blades are much better suited than angled blades for removing decorations from flat areas on your models because they allow you to scrape them off cleanly with minimal damage to surrounding areas. A little sanding after the chiseling process should leave you with a nice, clean surface. In this case, any slight imperfections were covered up by the replacement cog symbol.

The Land Raider Crusader/Redeemer kit had just been released that year along with the Codex Space Marines so it was mandatory to add one of each of these variants to the army.

The uniformity of the main color (though the lighting in some of the photos may make it appear otherwise) was achieved by using spray paint. At the time GW made a color called “Red Gore” which was a perfect burgundy color. I used Krylon Burgundy spray paint to base coat the tanks and Citadel Red Gore for any hand painted areas that had to match. The black and white areas on the main hull were simply painted over the burgundy spray. 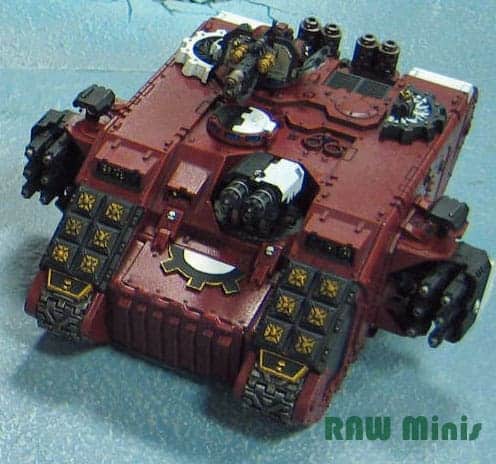 The same quick and easy painting methods used here can be easily adapted with other colors as desired as an expedient route to completing many different large hobby projects in a relatively short period of time. I’ll cover more ideas on this topic in future articles to come.

With the repeated changes to the Warhammer 40K game rules over the years the popularity of certain models waxes and wanes, but for me the one thing that is unchanging is the fun of having a collection that looks like an army as described in the associated 40K lore and literature. The new 40K 6th Edition hull point system may make these Armor Value 14 behemoths a bit less invincible than they once were, but who doesn’t like to see hulking monstrosities rumble across the battlefields of the 40K universe? 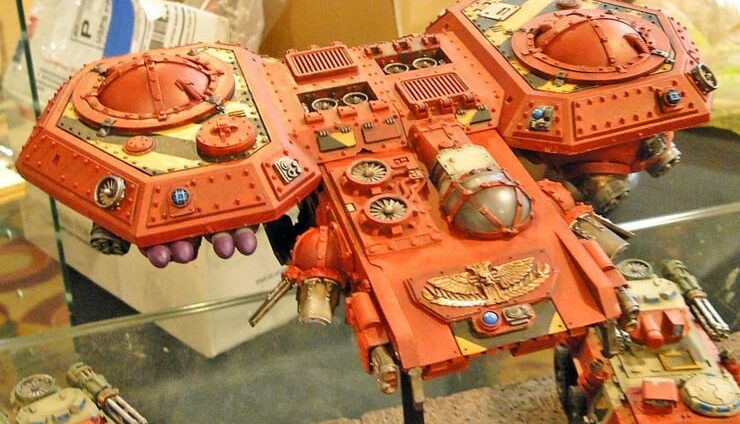 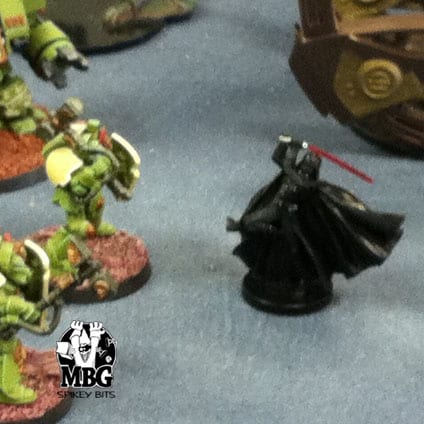 NEXT ARTICLE
Lord Vader Charges Your Assault Terminator! »
If you buy something from a link on our site, we may earn a commision. See our ethics statement.