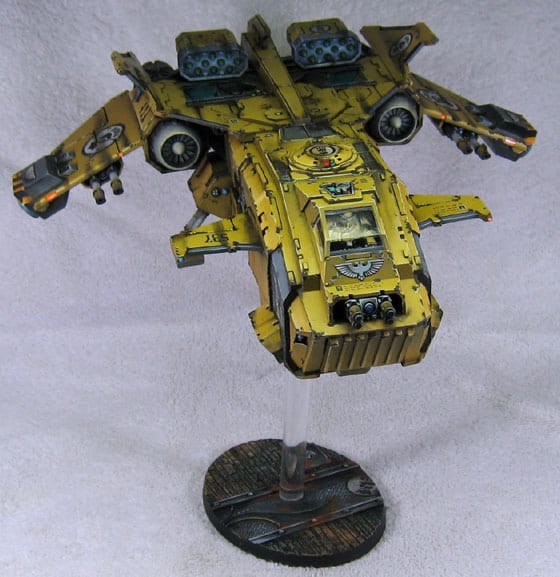 Hello everyone!  Spikey Bits was kind enough to extend me an invite to bombard you every so often with lots of pretty pictures of painted stuff! 🙂

My name is James Wappel, and this is my first posting here.  More than a few of you might be familiar with my own blog at: http://wappellious.blogspot.com/

I wanted to share with you this great Storm Eagle project I’ve been working on.

This particular model was an incredibly challenging project. It was very difficult to assemble, due to some serious Forge World casting issues.  Once it was put together, painting it called on several techniques. 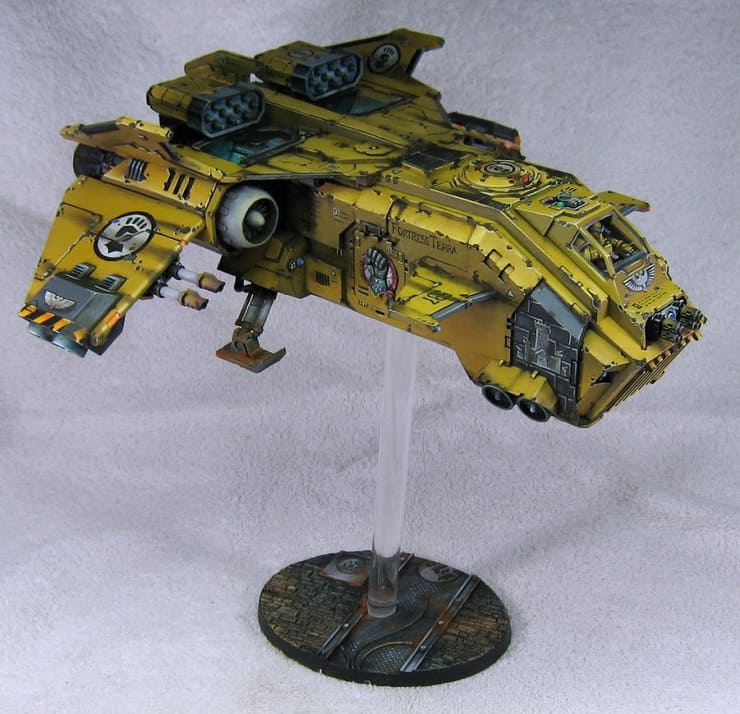 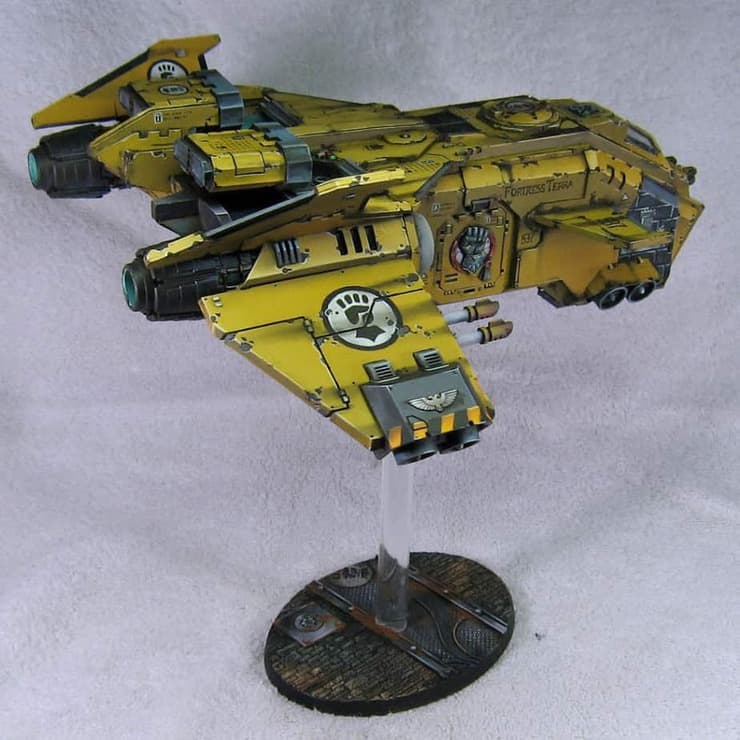 Obviously, it would rely heavily on weathering, since these large, broad surfaces created some great opportunity to have some stains, rust, and scorch marks. 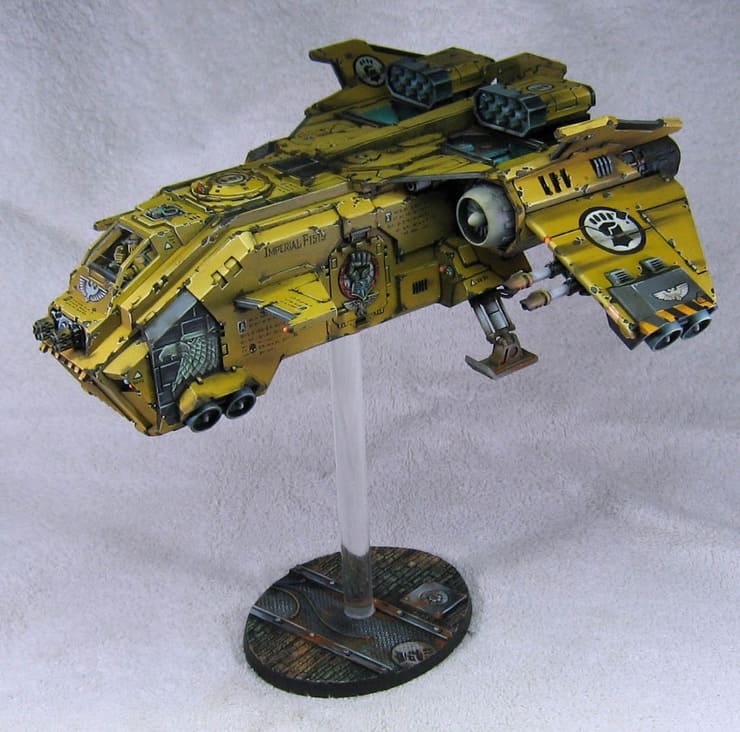 To set all that up, I had to make sure that I had enough light colors established first, as well as all my icons, logos, and other freehand designs. 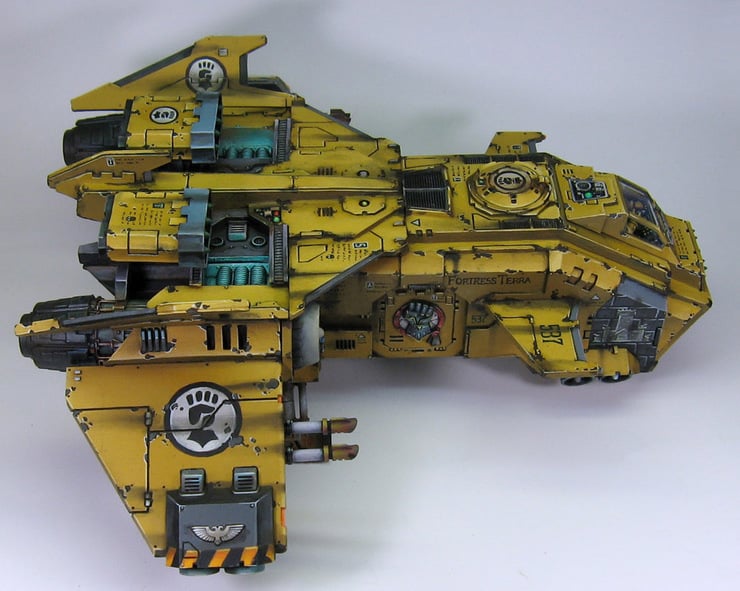 I used larger brushes for the vast majority of this piece, such as #4 filberts and flats, as well as a #8 round brush with a fine tip.  These larger brushes let me cover these
big areas quickly, and their chisel points meant that I could keep my edges with no problem. 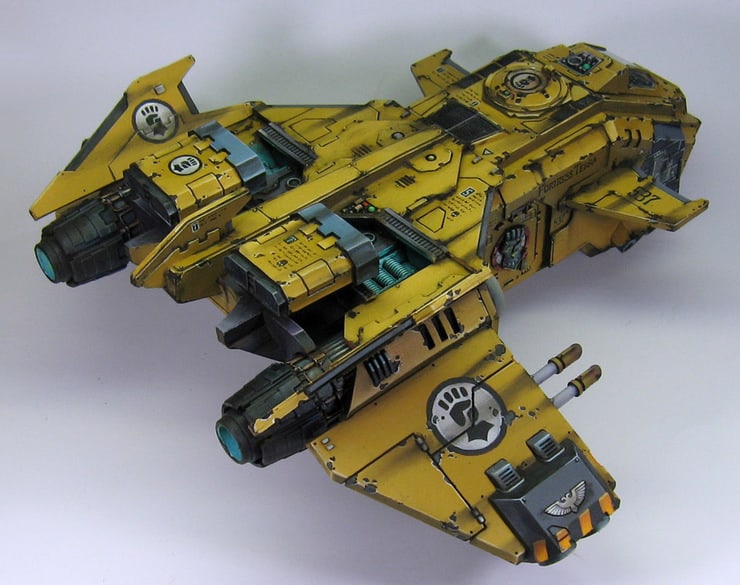 By working quickly enough, I almost could use a wet into wet blending in some areas! 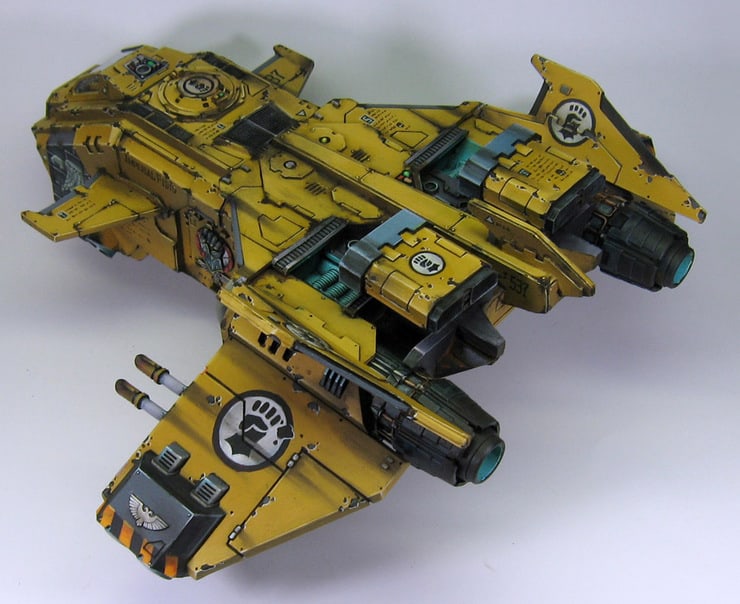 As I was painting this, it was separated into several key pieces.  There would be no way to reach some areas if it were all completely assembled!  So, the wing assemblies, the weapon pods, landing gear, and other pieces were painted individually. 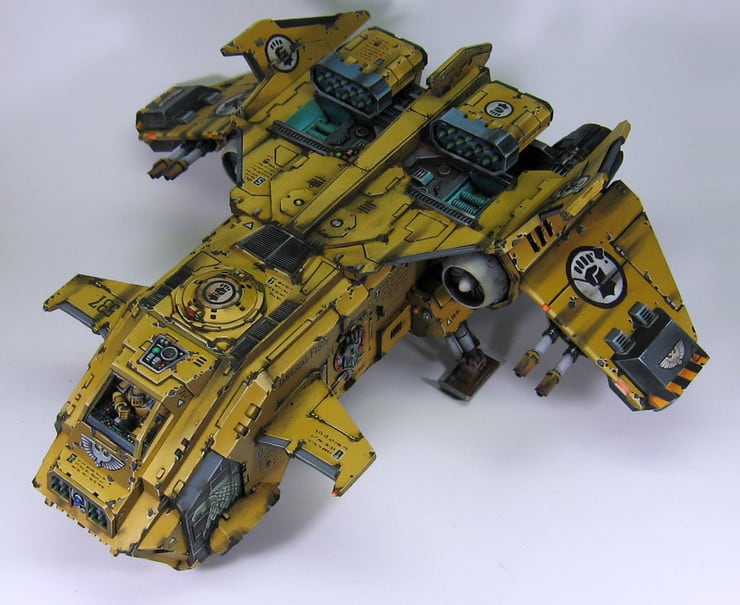 This was even more important, as I would be using weathering powders later on.  Those can be very messy, and they suffer from “gravity attacks”.  If I could isolate the various pieces, I would not have to worry about excess powders drifting onto unwanted surfaces! 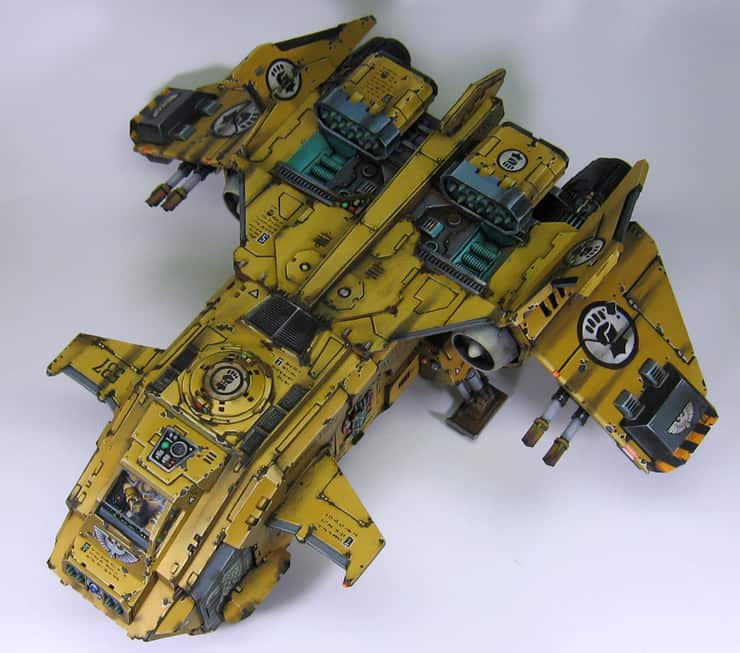 It can be difficult to paint something huge like this in many pieces, and it can have some harrowing moments as you do that final assembly, but it is well worth it in the end! 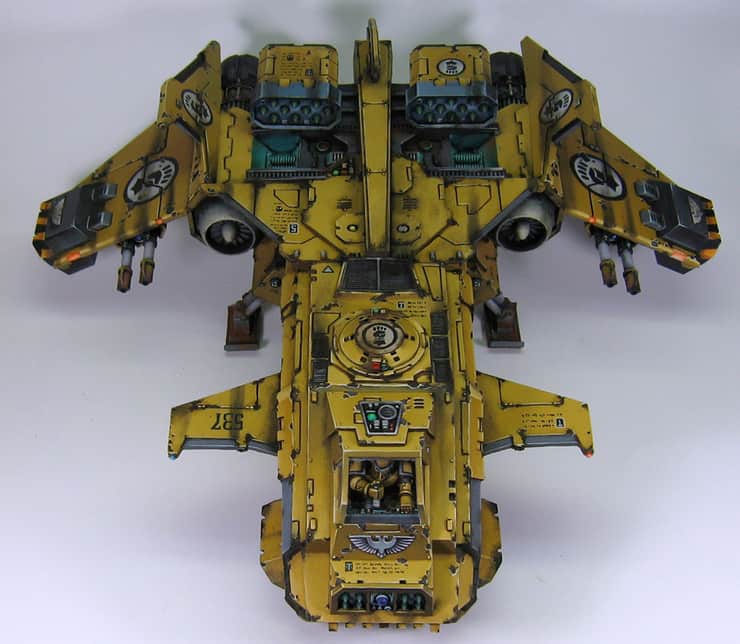 I am painting another one of these now, so in a week or two, you will be able to follow some of that progress back on my blog as well- which by the way there are lots of “how to” articles to check out as well. 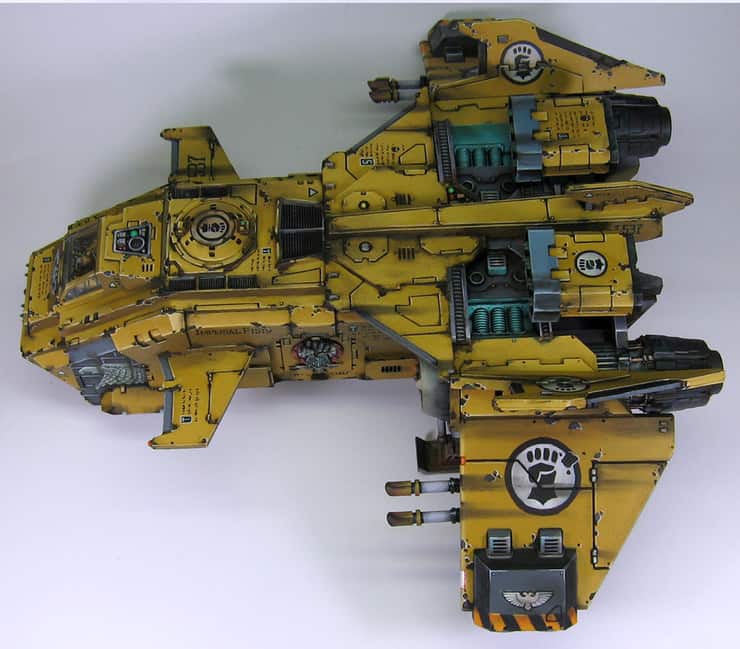 This view shows some of the extra weapons that I painted… 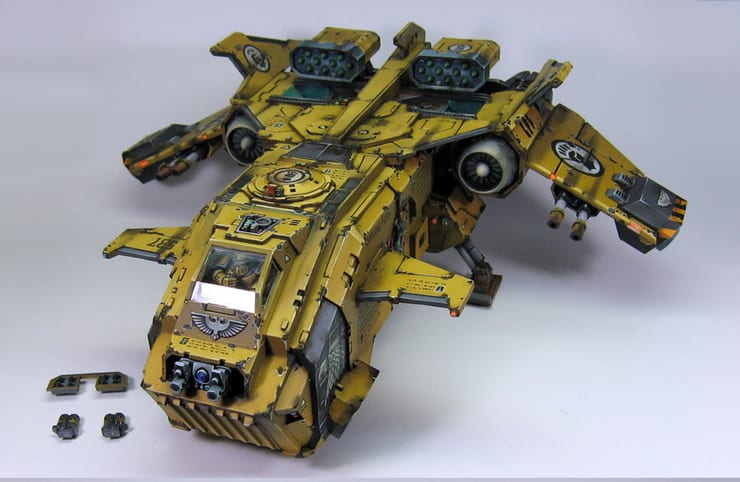 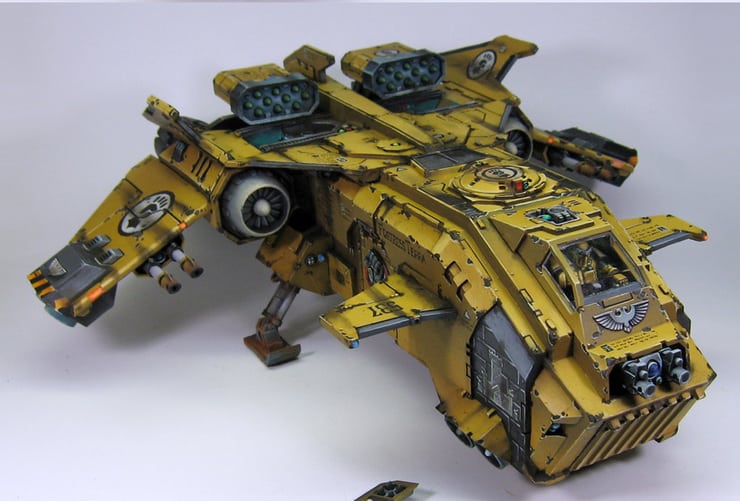 If you would like to learn more about many of the techniques used to paint this vehicle, and anything you have seen on my blog, there are still a few days left to join in on my painting video kickstarter!
Be sure to check it out at the below;
http://www.kickstarter.com/projects/891905985/discover-the-painting-pyramid-with-james-wappel
Please check out all the stretch goals and banners, as many reward levels have been cleared, so now may be the time to strike if you’ve been on the fence for this one!
Also, since I did not want to run afoul of any sort of copyright issues, the miniatures used for my various subjects were only from those manufacturers that gave me express permission to use them.
Most of the figures I am using are from Raging Heroes and Urban Mammoth, as well as some Reaper. There are over 50 subjects covered!!! Don’t Miss it! – James 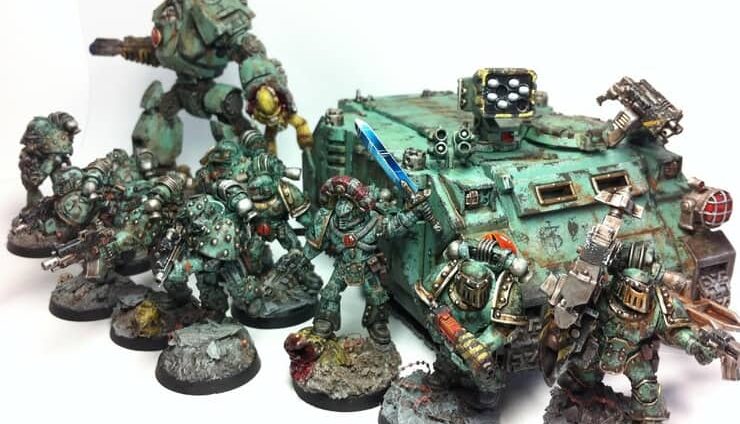 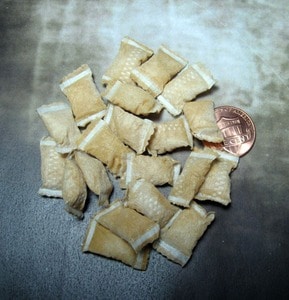 NEXT ARTICLE
New Hobby Accessories From Secret Weapon Minis »
If you buy something from a link on our site, we may earn a commision. See our ethics statement.

About the Author: wappellious