If you missed it 40k’s The Lost Patrol is on sale 3 months early!  Come see all the new New 40k, Elves er Aelfs, and Sigmar’s riding the lightning (again)! Reclaim the Mortal Realms! The gates of Azyrheim are cast wide open, and the heroic forces of Order march forth to loosen the iron grip of Chaos that blights the Mortal Realms. From the Free Peoples to the Fyreslayers, each warrior is determined and strong – whatever their motives, each wishes to see their lands returned to the verdant glory of times much missed. Leading the charge are the glittering Stormcast Eternals and their Extremis Chamber, with their unlikely allies the seraphon; hardy duardin, aelfs and Devoted of Sigmar follow in their blazing path. The war for the realms has begun! This 280-page book is the indispensable guide to the armies and factions of Order at the dawn of the Age of Sigmar. A must-own for all collectors and players of this Grand Alliance, and indeed anyone collecting and playing Warhammer Age of Sigmar, it takes you through the forces of Order with Warscrolls for every miniature, extensive information on the twenty-one factions, nineteen Warscroll Battalions and a selection of sample armies to help you mix and match your collection into a heroic fighting force – or provide inspiration for your next steps into the world of Warhammer Age of Sigmar. Swinging a spiked metal ball in devastating arcs, dragging unfortunate foes into its path with a massive, notched blade, this Slaughterpriest is so dedicated to the howling devotion to the Blood God that even his enemies begin to fall to blind, berserker rage – that is, as long as they are not boiled alive by the heat, rage and fury of the Slaughterpriest’s brutal attentions. This multi-part plastic kit gives you everything needed to make one single-pose Slaughterpriest with Hackblade and Wrath-hammer. Includes a CItadel 40mm Round base. Merciless hunters who stalk the weak, these Aspiring Deathbringers stride through the battlefield exuding pure menace with every step. Any foes who display even the slightest fear or hesitation are immediately smashed apart with rage and fury, left to fall and rot where they land. This multi-part plastic kit gives you everything needed to make one single-pose Aspiring Deathbringer with Goreaxe and Skullhammer, clad in a Khornate skull helm. Includes a Citadel 40mm Round base. Bellowing forth a mighty, blood-curdling roar, the Exalted Deathbringer pierces his enemy with his enormous spear, lifting him high with a single, muscular heave. The weight of the unfortunate victim drives them further down onto the polearm, each agonised, twisting convulsion pushing the blade ever deeper. Soon (but not soon enough), they will perish, adding yet another grisly trophy to the Exalted Deathbringer’s ever-expanding collection. This multi-part plastic kit gives you everything needed to make one single-pose Exalted Deathbringer with Impaling Spear. Includes a CItadel 40mm Round base. Bellowing triumphantly, screaming their mocking chants and exaltations to the Blood God, the Gorechosen Champions are an absolutely terrifying example of Khornate hatred and might. Armed with hackblades, goreaxes, spears and hammers, these bringers of savage butchery exemplify the virtually indiscriminate, murderous wrath of Chaos – where they walk, the mortal realms themselves tremble.

This bundle nets you the three Gorechosen Champions! You’ll receive an Exalted Deathbringer with Impaling Spear, an Aspiring Deathbringer with Goreaxe and Skullhammer and a Slaughterpriest with Hackblade and Wrath-hammer. Moraz III – a deadly jungle world filled with danger and fear, populated by ferocious aliens who wait in the undergrowth to pounce on the unwary and mercilessly kill anyone who stumbles across them. Even the plant life itself is malignant here, constantly twisting and growing in unnatural ways to trap its prey. A dropship containing vitally important surveillance files has crash landed on this hostile planet. It’s up to you and your squad of Space Marine Scouts to retrieve these files, activate the dropship, and hopefully escape with your lives.

A fun and compelling two-player challenge, Lost Patrol is a boxed game set on a hostile jungle world full of sinister hidden danger! Players assume the roles of a Space Marines Scout squad and a fierce swarm of cunning Genestealers eager to end their lives. The Genestealers of Moraz III have every advantage on their home turf and will make every attempt to quickly despatch the human intruders. The Scouts will almost certainly all die. But how far can you get? Will you ever see the drop pod tile? And each game becomes a challenge to try and get further – and because you can turn games around in 10 minutes when you get into it, you can play loads of it, and swap sides and make it a competition with your mate. Inside the box, you’ll find five Space Marine Scouts, twelve Genestealers, six Infestations (the markers of imminent Genestealer appearance),thirty hex tiles and the full rules for play. This game will be available from 11th June 2016.

War Zone Fenris: Curse of the Wulfen – The Novel $24 The Wulfen of the 13th Company have not been seen since the days Leman Russ sailed the Sea of Stars at the head of his Legion. Now, amid daemon incursions of alarming size, they return to the Space Wolves to fight by their side. As Logan Grimnar’s Great Companies scour the stars to rally their returning ancestors, ever more battle-brothers begin to fall prey to mysterious changes. Is the Wulfen’s reappearance really a blessing of Russ, or will the dark omens that plague Harald Deathwolf spell doom for the warriors of Fenris? The crew of the Sisypheum join a covert Shattered Legions assault on a hidden Alpha Legion outpost, orchestrated by none other than the infamous Iron Hands warleader Shadrak Meduson

THE STORY
Since the near-destruction of the Iron Hands, Raven Guard and Salamanders on Isstvan V, scattered warbands from these ‘shattered Legions’ have waged a guerrilla war on Horus’ forces across the galaxy. Now, the crew of the Sisypheum are drawn into a covert assault on a hidden Alpha Legion outpost – an assault orchestrated by none other than the infamous warleader Shadrak Meduson himself. But what does Meduson really hope to make from such a bold move against the sons of Alpharius, arguably the undisputed masters of deception…?

READ IT BECAUSE
It’s a tale from the dark underbelly of the Horus Heresy, as the broken remnants of the Isstvan Legions wage a covert war against the masters of deception: the Alpha Legion.

Wow! Well we had heard from the GAMA trade show that lost patrol was coming in June, and the date confirms it. We’ve never seen anything go up for pre-order THREE months ahead of time from Games Workshop before, I wonder what has changed?

Has the GW web server’s machine spirit been angered, or is this a correct listing for this weekend?

~What’s on your “to buy” list for this week? 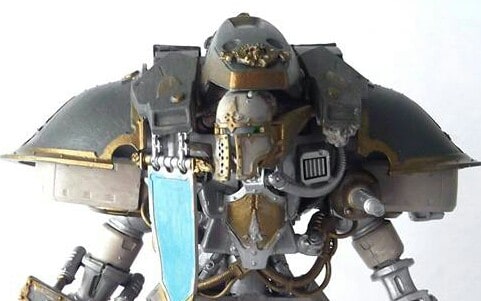 NEXT ARTICLE
Who Can Dance Better? – Knight Conversion Corner »
If you buy something from a link on our site, we may earn a commision. See our ethics statement.