Sick of WOW & Looking for a New MMO to Try? 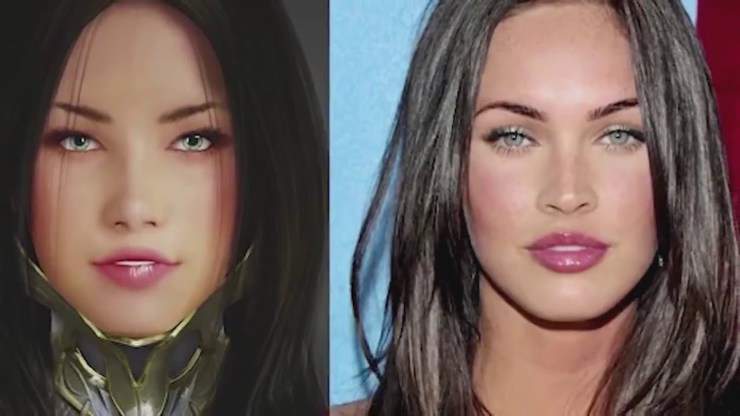 Are you tired of playing the same old MMO? Sick of WOW’s static tab target combat, ESO’s lag issues, or even something else? Then give this game a try!

Finding the right MMO is extremely hard and everyone seems to have different opinions about what makes a great MMO experience. In this article I would like to tell you why I love Black Desert Online so much and why I think every fan of the genre should give it a try. 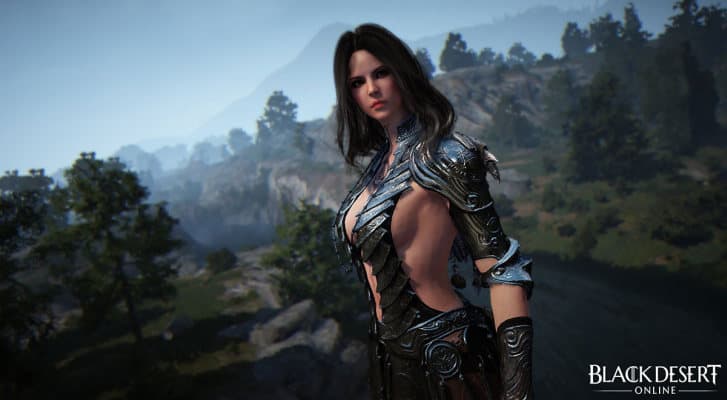 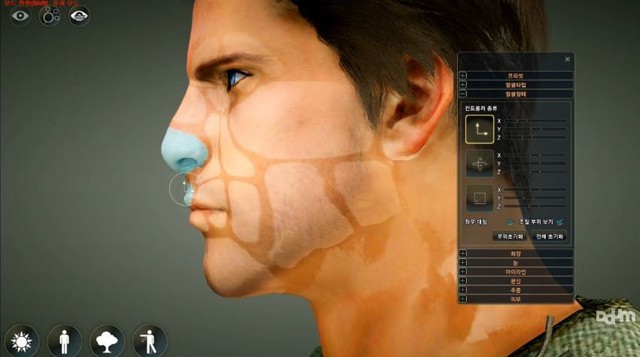 Black Desert Online is the most incredible looking MMO to date and you start experiencing the incredible graphics the second you start to create your first character! The character customization options are literally limitless, allowing you to change anything and everything you could possible think of and in great detail. There is far too much to mention so I will just brush across a few options. There are a few preset face and body templates to choose as a base for your character but from there each individual body part can be manipulated in any three dimensional direction allowing you to customize the length width and depth of everything.

There are very many makeup and facial hair options to play with and doesn’t only provide styles or colors to choose from but also density and area of each. As far as the hair goes, you can choose a preset template to start from and then pick from a variety of colors for the roots, main and tips of the hair. In each of these three areas the area and density can be chosen. If you want to take it a step further just grab a strand of the hair and pull it out or manipulate it however you want.

I think that is enough of the character creator but I really could go on forever due to the endless options. I spent 3 hours on the character creator just creating my first toon and it was no different with all the other toons as well. After you have finished creating your character and are thrown into the game you quickly realize that your character still look exactly like you made them instead of a loosely based skin like we have all seen in other games. 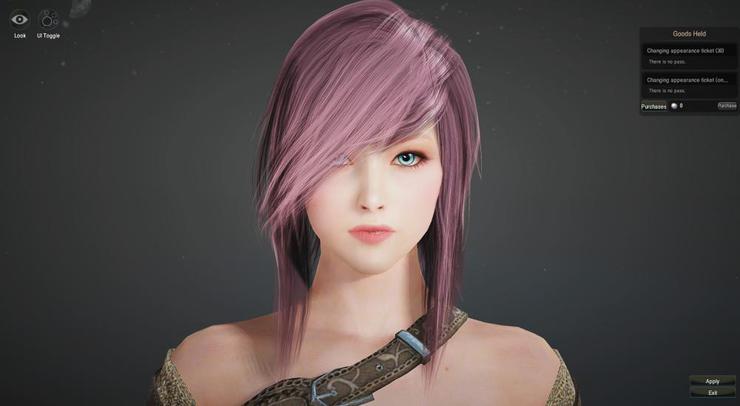 The character creator is so limitless that you can make your characters look incredible, 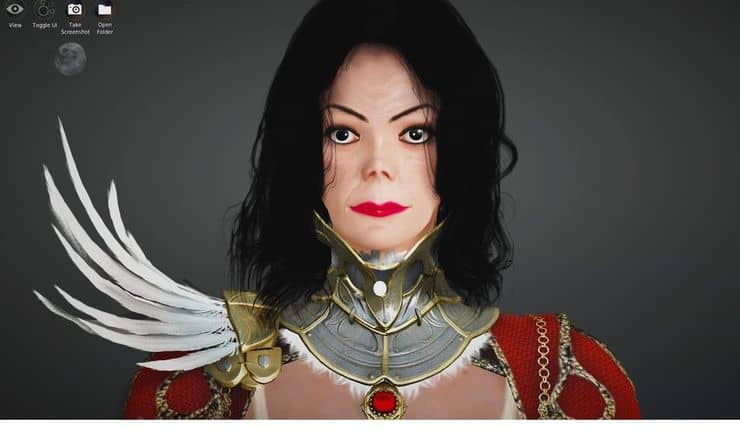 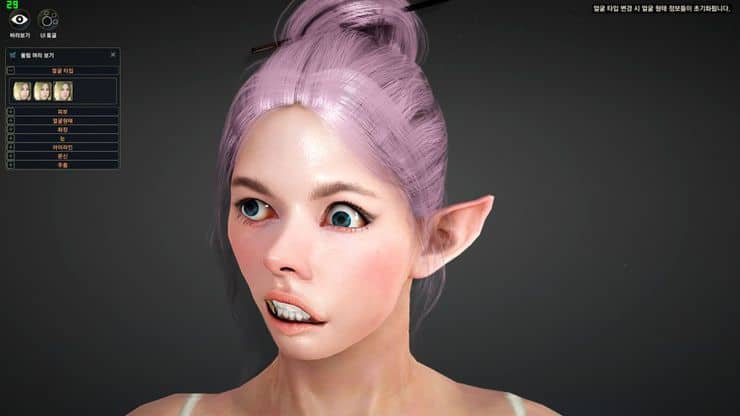 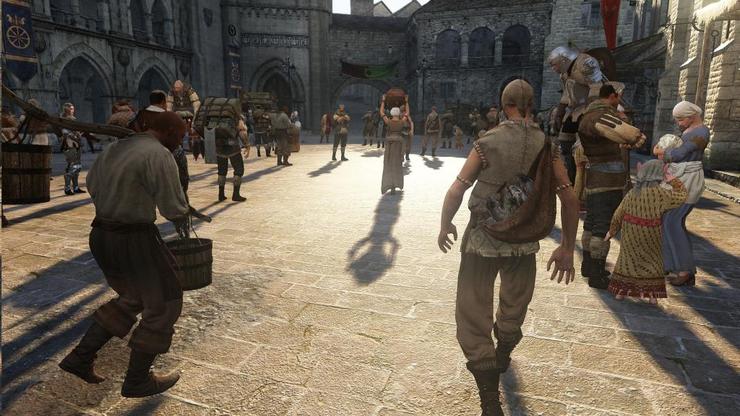 All of the roads and towns you come to feel very alive with other players and NPCs traveling everywhere and talking. Some of the NPCs even mention things about the leading guilds in the game. 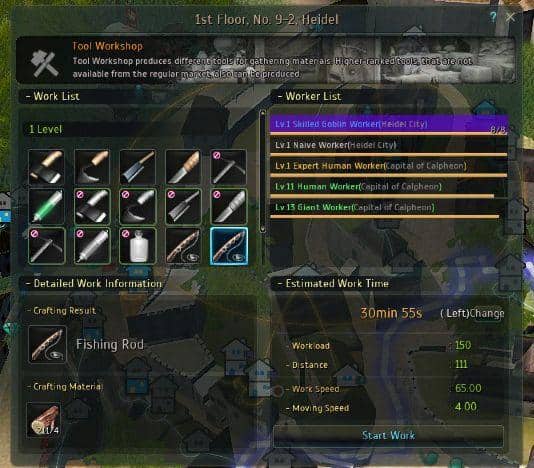 The gathering and crafting system is very in depth and feels very rewarding. You don’t have to do everything yourself either. Instead workers can be hired to go out in the world and gather materials for you at nodes and worker lodging can be purchased with Contribution Points to hire more workers for that certain town. Workers are also used to craft certain things such as costumes, gear, weapons, wagons, ships, horse gear, trade crates and many other things.

One great way to level your character and gain massive loot is by grinding mobs located all over the world. These mobs are tightly grouped together in many areas which leads to a lot of fast paced combat needed to knock them all down. 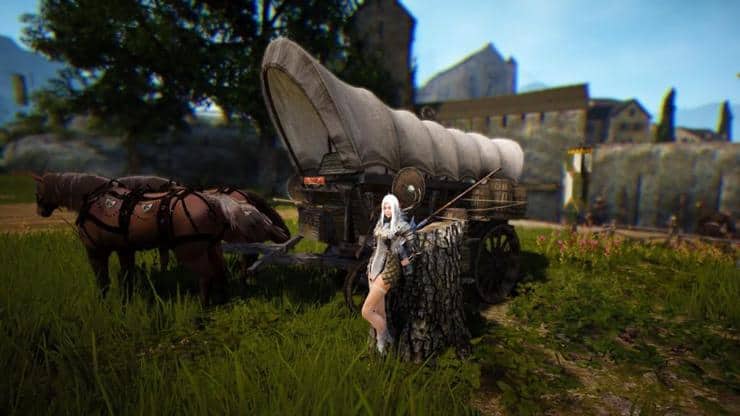 Grinding isn’t you thing? That’s no problem because there are many other ways of making money such as fishing, crafting, gathering, hunting, horse training, and you can even build a trade empire where your workers craft trade goods for you on one side of the world, load them in a wagon, and then you take these goods to the other side of the world to sell in a far away town for massive amounts of silver. 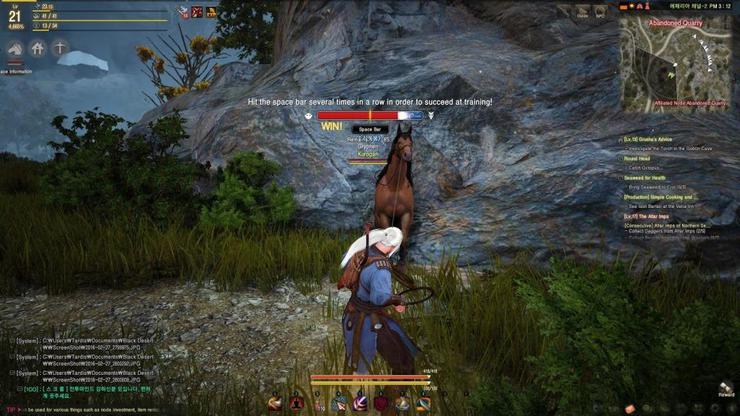 There are many mini games in Black Desert Online and all are very interactive and many people find some of them to be quite soothing. Set out with some ropes and lumps of sugar to tame wild horses to train, level and breed. 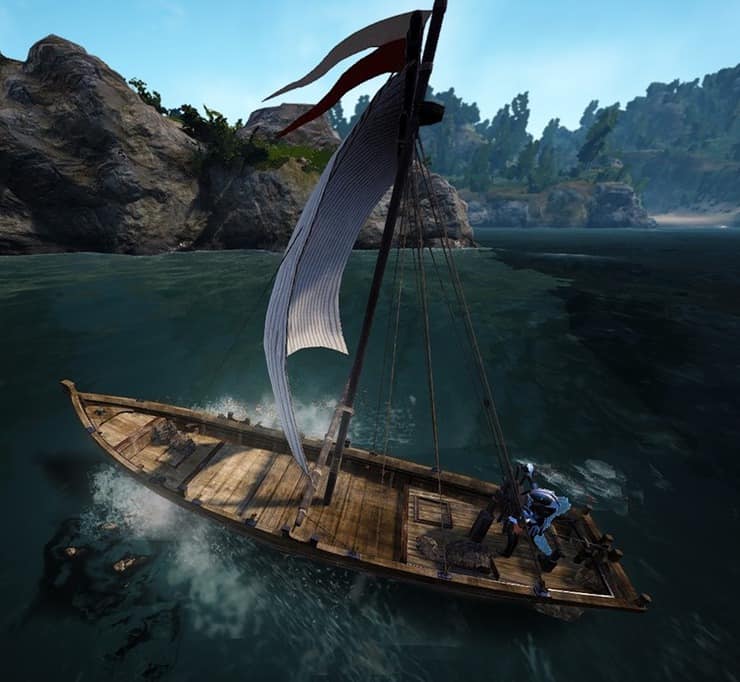 Sail out on your fishing boat to catch exotic fish in the ocean.

The combat system is one of the main things that pulled me into Black Desert Online. I usually find most MMOs to have very static combat systems with tab targeting allowing you to either run around your targets and hit them with your skills without really aiming at them or just end up standing in one spot clicking numbers with your thumb on an MMO mouse or clicking macros on a keyboard. You will not get away with any of that in this game! Black Desert Online has an action combat style with an intense combo system.

Many button combos are used to pull off each ability and some abilities link together with other abilities which makes it feel more like a fighting game’s combat than an MMO’s. Your facing against your enemies matters! If you knock your enemy off their feet then you will do more damage while they are down and the same goes for being behind your enemy or knocking them up in the air. So you never want to leave your back exposed to any powerful foe or you may just take a huge hit. The combat is very hard to explain and many don’t understand exactly how fast paced and interactive it is until they have tried it for themselves. 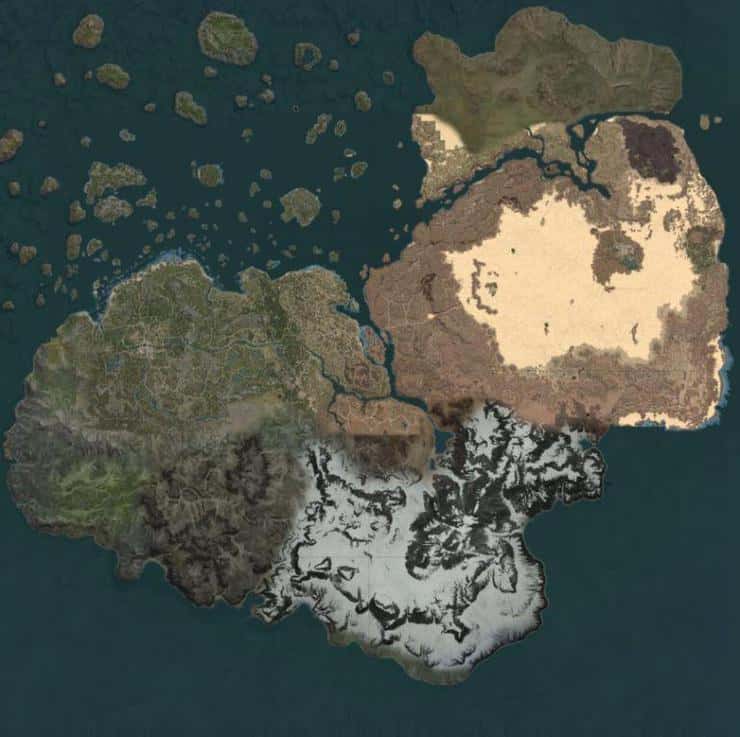 The world is massive with many different areas to explore and is constantly expanding with every new DLC that comes out. What makes it even better is no loading time anywhere because there are no instances. This means you can run from one end of the world to the other, go in any buildings/caves and enter and exit PVP with no loading screen at all. The map above doesn’t do it justice and there are already plans to expands it further. 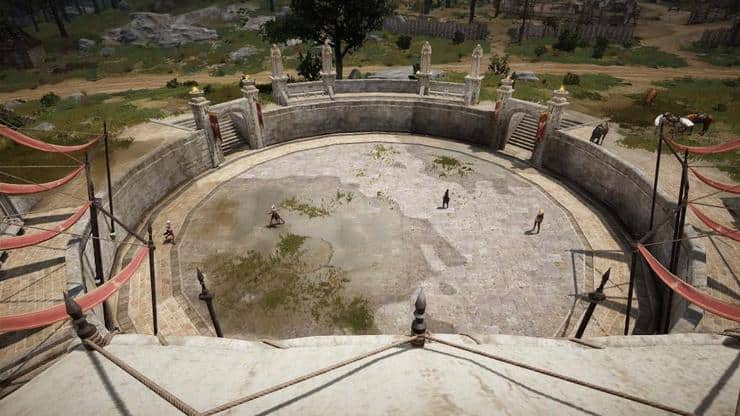 There is an open world PvP system in Black Desert Online that unlocks when you hit level 50. Many think this means they will just get killed every time they turn around but that is not the case. There is a Karma system that keeps players from just going psycho on everyone. If a players Karma goes to low then they become an enemy of everyone and can be hunted down, killed and sent off to a jail where they must complete some tasks before being released.

For the most part you won’t get killed by another player unless you are taking their grind spot. If you want to PvP in the world and don’t want to lose Karma you can always go to any of the arenas that are located just outside most of the towns and there’s sure to be a fight or two waiting for you. 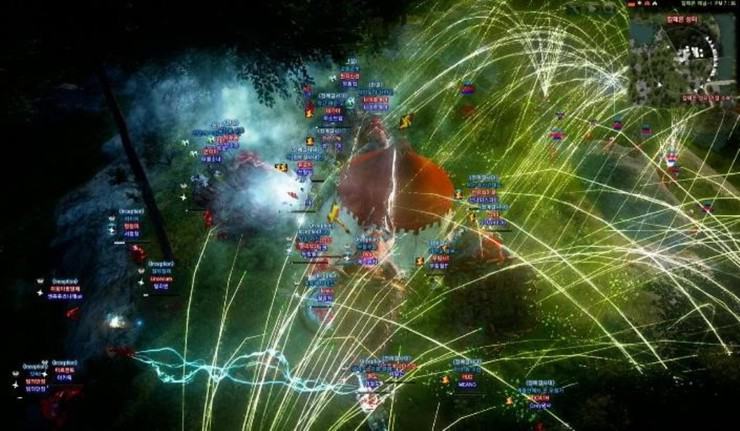 If you like the larger scale PvP then there are node wars that pit massive numbers against on another in a struggle to keep or obtain control of a resourse node. It is too much to explain so check out BDO warfare. 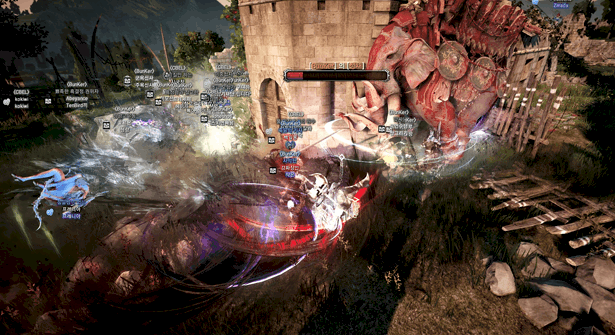 This article has become pretty long and I still feel like I haven’t even started describing the game to you. I can go on and on forever about this game because it never leaves me wanting more. Every single day I play I find something else that makes me think “I love this game”. Right now over over the Black Desert Online website you can get a free 7 day trial but it is a buy to play game with a price as low as $10 and no monthly fee. You have nothing at all to lose by trying this game except faith in every other MMO you have ever played!

If you want to know more about the game you can always hit up the Black Desert Online website or come hang out with us in our CCG Twitch Channel and see some live gameplay. Hope to see you there! 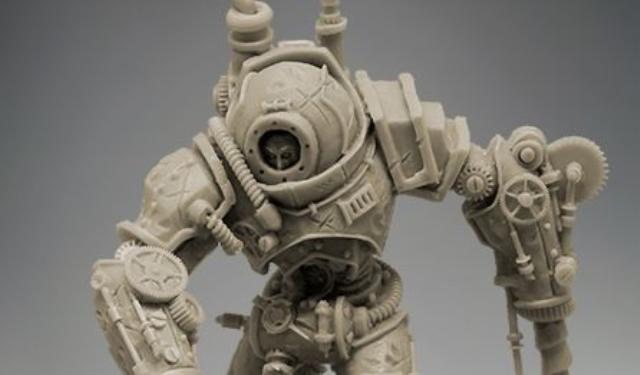 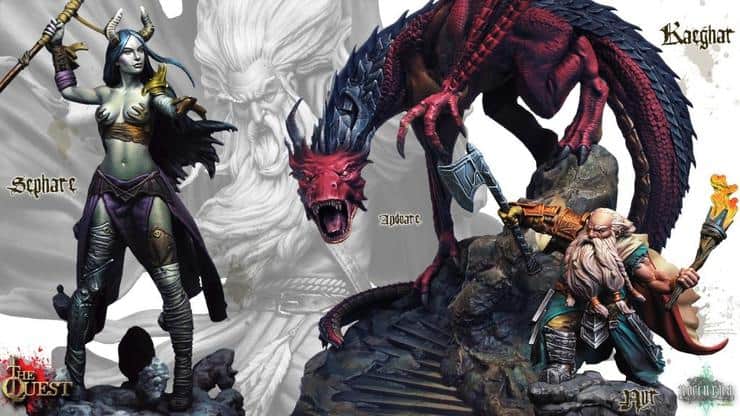 NEXT ARTICLE
Dragons, Dwarves, Elves, & Wizards, What More Could You Want? »
If you buy something from a link on our site, we may earn a commision. See our ethics statement.