This week’s new releases are more Kharadron Overlords minis and a new book! Come take a look at what’s coming up for pre-order! 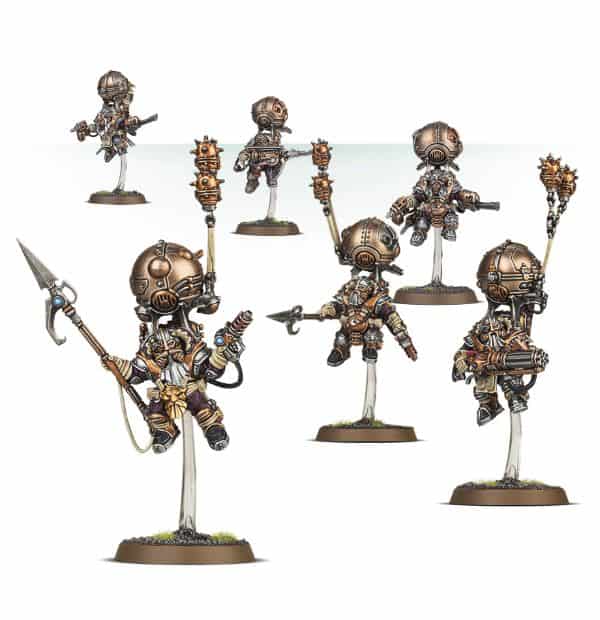 Should you wish to field a set each of some of the Kharadron Overlords’ finest – the Endrinriggers and the Skywardens – you can do no wrong with this bundle. In it, you’ll receive 2 boxes of Skyriggers, multi-part plastic miniatures that can be assembled as 3 of each:

Endrinriggers are repairmen and maintenance workers – and yet so much more. Their tools of the trade, rivet guns and aethermatic saws, can be turned against an encroaching foe just as easily as they can be used to patch up a creaking Gunhauler.

Skywardens are elite aerial cavalry, experts in hit-and-run attacks that shock enemies with powerful vulcaniser pistols and vicious skypikes. They have a tendency to spread chaos with their timed explosives, jetting away in a blast of aether-vapour as detonations ring out. 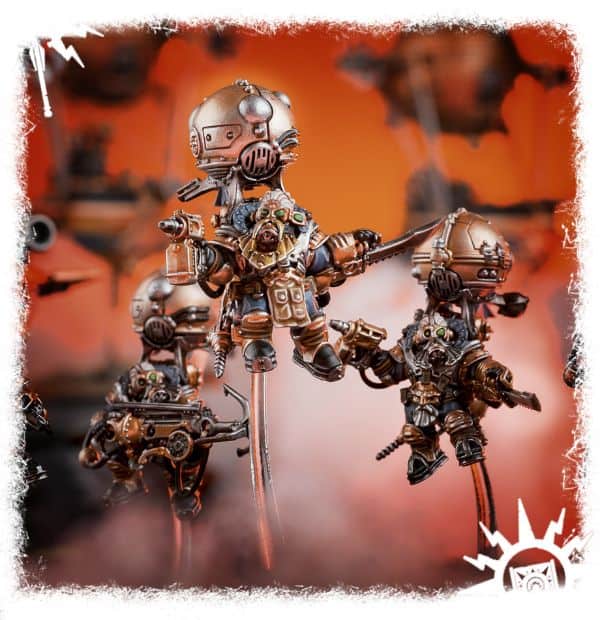 Endrinriggers are members of the Endrineers Guild, and report to a ship’s Captain as well as the fleet’s Endrinmaster. They bear rapid-fire rivet guns and aethermatic saws for conducting airborne repairs, flying to wherever they are needed in order to patch up damage to a ship. In need, Endrinriggers can put their high‑powered tools to deadly use, riddling the foe with red-hot rivets or slicing through armour, flesh and bone with their whirring sawblades. 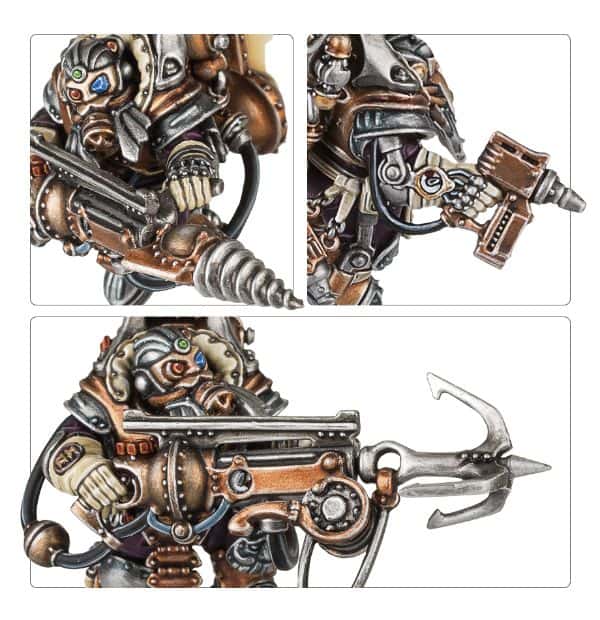 This multi-part plastic kit contains the components necessary to assemble 3 Endrinriggers. Adept at performing emergency repairs during the heat of battle, they carry aethermatic saws and rivet guns which are ideal for plugging gaps in skyfleet hulls – or making holes in the enemy.

One of the 3 can carry an aethermatic volley gun, and one can carry a skyhook, drill cannon or grapnel launcher. All 3 feature their own dirigible and steering rudder covered in pipework and aerodynamic pieces above their sealed suit and power pack, and there are options for a Mizzenmaster, with his own specific helmet. Included are extra details for making your Endrinriggers unique: a spare rivet gun and a variety of maintenance tools. 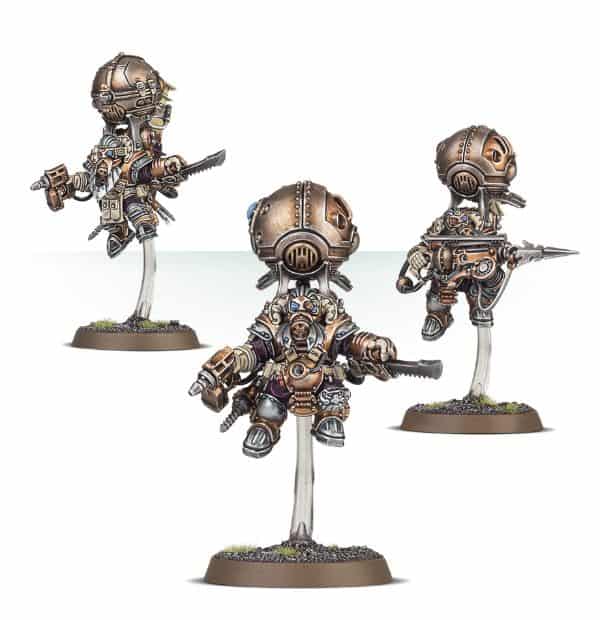 This kit comes as 88 components, and is supplied with 3 Citadel 32mm Round bases and 3 flying stems of differing heights: 30mm, 32.5mm and 35mm. It can optionally be used to assemble 3 Skywardens. 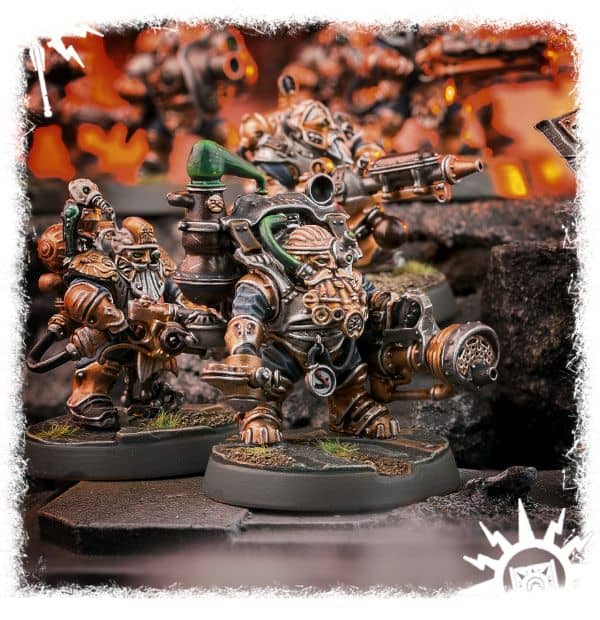 An Aether-Khemist is an invaluable addition to an airfleet. The armour of these specialists incorporates an array of high-tech tools, including quadbreather apparatus that allows them to sniff out aether-gold hidden within thick cloud banks. In addition to harvesting and assessing airborne resources, their atmospheric anatomisers can vacuum away a foe’s breathable air or spray a cloud of lethal chemicals. 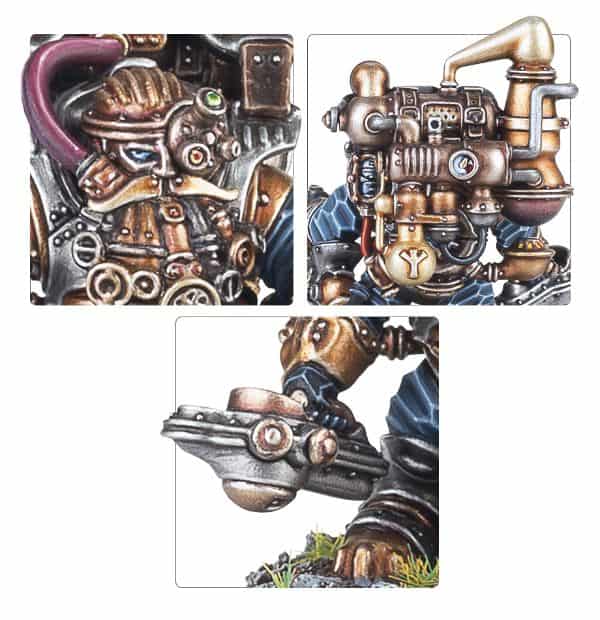 Pressurised gouts of poison gas can be fired forwards in a deafening blast known as the ‘Roar of Grungni’, or a shimmering golden cloud of chemfog can be released with the pull of a lever, a metallic fug that boosts the power of nearby aetheric weapons.

This multi-part plastic kit contains the components necessary to assemble an Aether-Khemist. He lugs around a number of heavy instruments, useful for both analysing the air around him and bludgeoning anyone who gets in his way, and his atmospheric anatomiser blasts foes with clouds of noxious aether – or steals away the very air around them, suffocating them quickly and painfully. 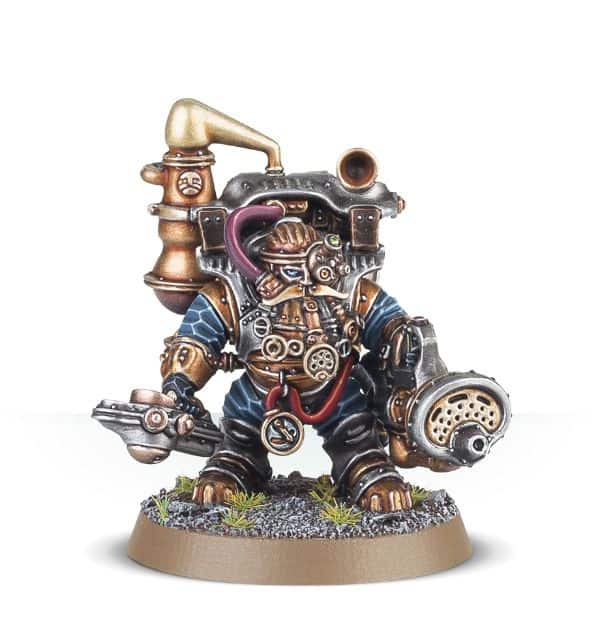 His sealed armour is covered in detail, from the various lenses used to peer at the composition of the elements to the filters in his mask used to ‘taste’ the air around him.

The Aether-Khemist comes as 12 components, and is supplied with a Citadel 32mm Round base. 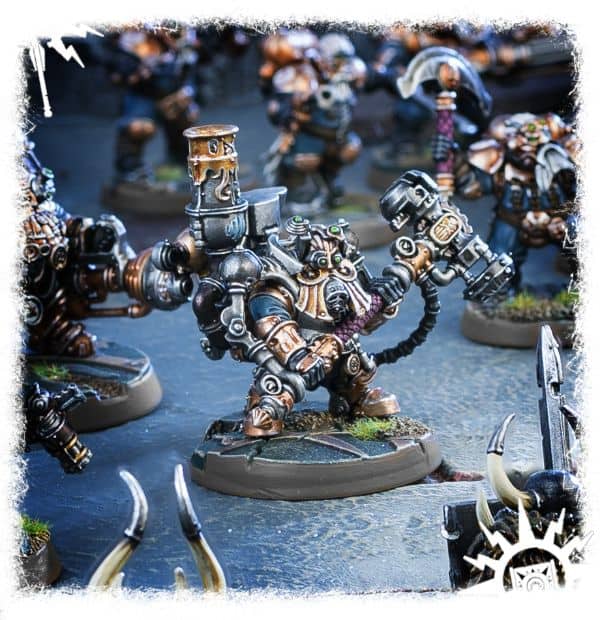 Endrinmasters are senior members of the Endrineers Guild responsible for the upkeep of the fleets, and they take great pride in the speed and firepower of the craft under their auspices. They can strip down and reassemble an aether-endrin while hanging upside down miles above land, and pick out a single misalignment amidst thousands of moving cogs using a mechanical intuition that other races might call magic. 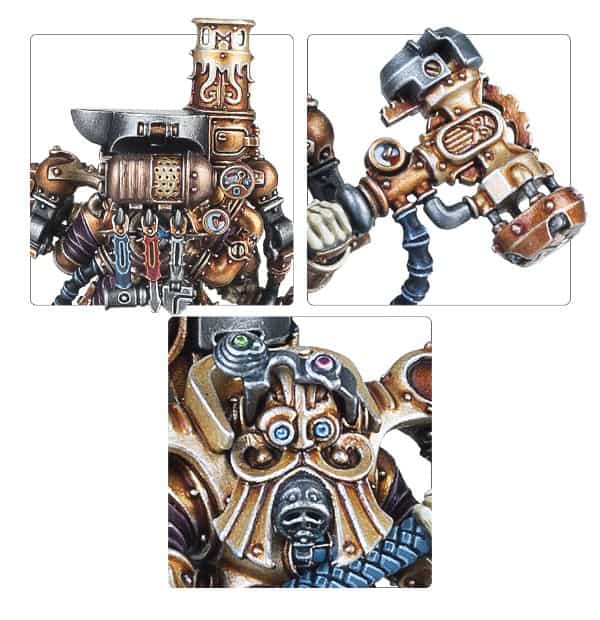 This multi-part plastic kit contains the components necessary to assemble an Endrinmaster. Covered in details signifying his genius in maintaining the complex machinery of the skyfleets, he wields a massive aetherhammer – this is connected to his suit by pipes and metal arms, implying incredible weight only he could lift. His headgear, as well as a variety of lenses used to aid diagnostics, features the ‘God’s Eye’; a beam emitter that can cut through and weld metal (with a nice secondary use in blasting enemies), and he’s brimming with tools and equipment for battlefield repairs; the Endrinmaster goes so far as carrying an anvil into battle for on the spot repairs!! 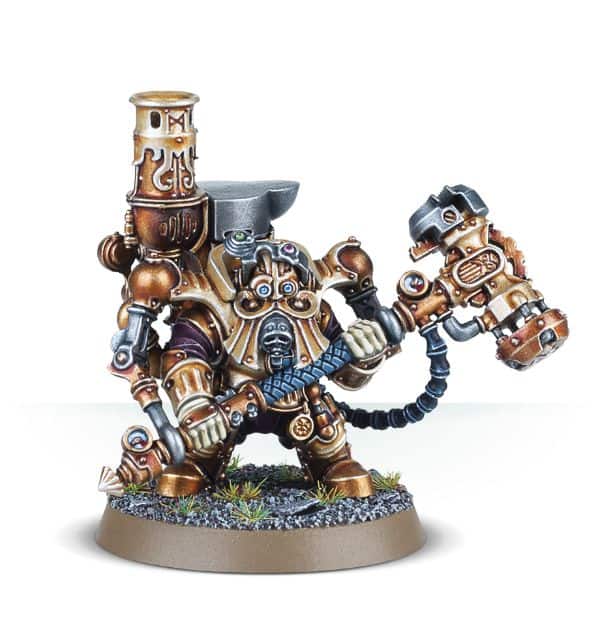 This model comes as 13 components, and is supplied with a Citadel 32mm Round base. 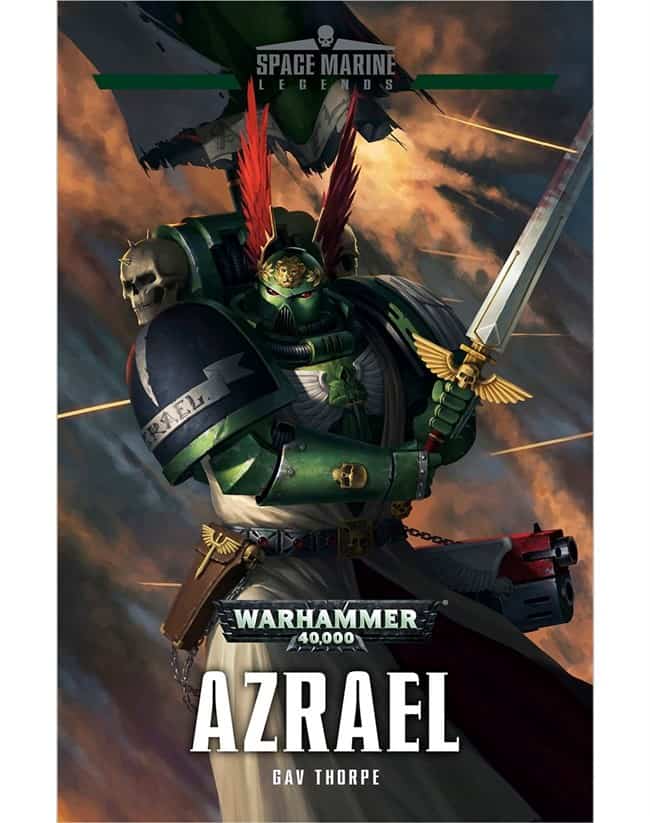 The Dark Angels Chapter sprang from the First Legion of Space Marines to fight and die at the Emperor’s side. But over ten thousand years, even the most staunchly loyal warriors of the Imperium can fall from grace, and the Dark Angels guard their own murky secrets most carefully – only Supreme Grand Master Azrael knows them all. A legend among Space Marines, he has fought for centuries and ever at the forefront of battle. Now, with the enigmatically alien eldar as his uneasy and unlikely allies, he must tread the fine line once more between the pursuit of victory, and keeping the Chapter’s past safely buried…

READ IT BECAUSE
Gav Thorpe, without a doubt the Supreme Grand Master of Dark Angels fiction, returns to Azrael in a tale that delves deep into the character’s psyche and motivations.

This is the last week for the Kharadron Overlords. Be sure to head over to Games Workshop and pick up these new releases. 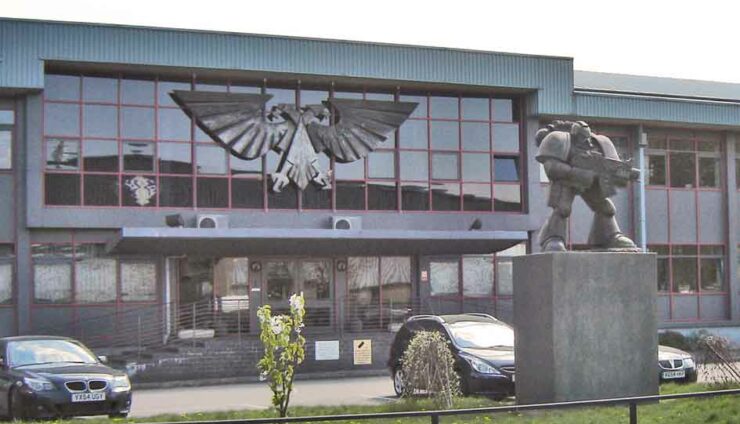 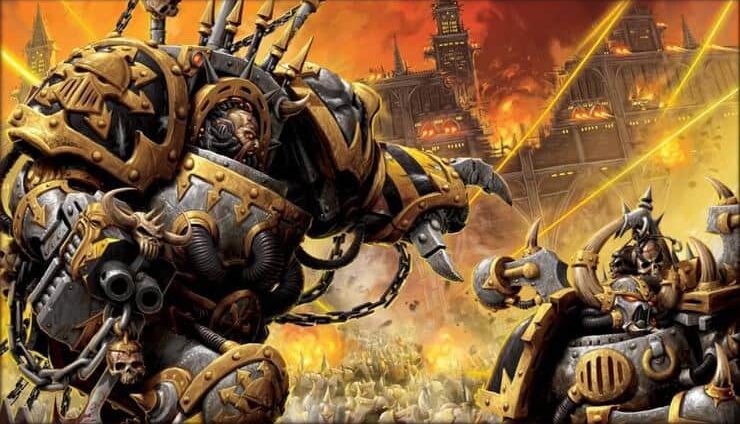 NEXT ARTICLE
RUMORS: Chaos Returning In Full Force to 8th Edition? »
If you buy something from a link on our site, we may earn a commision. See our ethics statement.