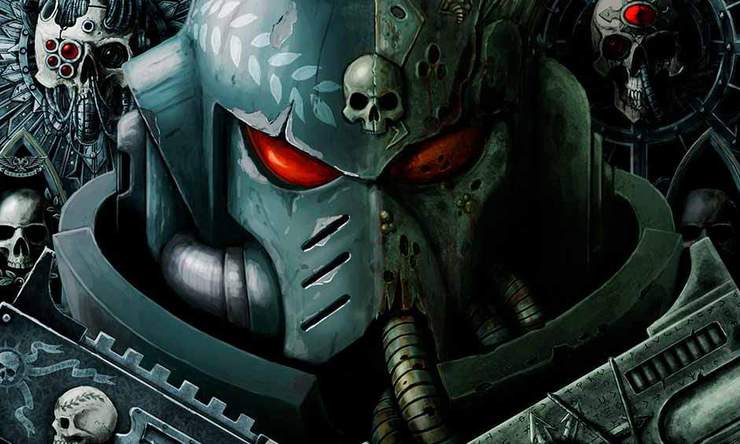 Today one of our guest writers is going to running through a list of his 10 biggest losers of 8th edition. Come take a look at who made his list. 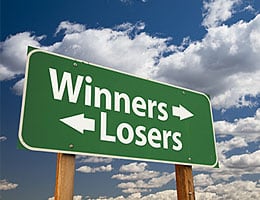 Having scanned through the indices a couple times, Discordian and I came up with a list of some of the losers of 8th. We covered the top 10 last week.

DISCLAIMER- This was written originally JUNE 8th- Before the release even happened and based entirely off the leaks. Flyers are GOOD and that was a PREDICTION at the time.

This list isn’t even necessarily a list of BAD things in the game. Rather, it is a list of the units that got significantly worse (in our opinion) in the move from 7th to 8th edition. Reasons range from a significant loss in utility, to extreme nerfs in terms of rules reduction. 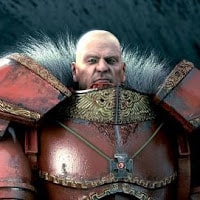 What a yoyo this guy has done. From meh in the Inquisition book to AMAZING in Imperial Agents and Gathering Storm to meh again. He was the MUST TAKE choice in a Castellans of the Imperium army, but not any more. Such a cool model and such a waste. Sorry Lord of Formosa. With no ObSec in the game, and the fact your “Interceptor” is now just an overwatch… and only for other Ordo Malleus models…well there is nothing really impressive about you. 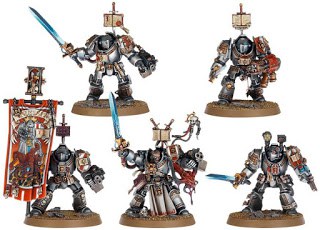 *Not a playable unit pictured

Paladins are never going to really make me happy. Their own fluff hypes them up to much, and then they always just end up coming across as fat terminators.

Last edition my only motivation for taking them was for Feel No Pain and a Banner, the later only because they stole it from my erased ghost knights from the previous edition.

And that’s were we start with talking about their issues, both those things no longer are unique to them because the Banner-Man and Apothecary are separate dude units now. Now they literally are a unit of terminators that are just slightly better at being terminators. The two saving graces I can see with them is that you can take less of them (not a joke even though it reads like one, 3-10 man units) and you can take 2 special weapons per 5. The later you don’t do if you make use of the former.

I also want to bring up that a base custodian is 52 points and a base paladin is 55. Custodians hit harder, still toughness 5, remembered storm shields were a thing (only 59 points when they do that), their banner is hidden in the unit (and drastically cheaper to include), and are a troops choice in a kitchen sink faction army.

Now Paladins are pyskers and they do get grenades, but both those things have really lost importance. Custodians don’t get deep-strike anymore and can’t gate, fair enough. But I’m going to point out if a Paladin unit gates, it’s actively running away from the two models giving them buffs that used to be in their unit.

I keep trying to say something nice about them, but it always has a caveat. And then I have to ask myself why bother.

Inquisition as a whole

This army really got nerfed with the breaking up of Inquisition Henchman Warbands. Several units don’t even have Inquisition as a Keyword anymore (Death Cult Assassins and Crusaders). A lot of wargear has been cut (psychotroke grenades, hell rifles etc. etc.) and all the amazingly cool synergistic effects are just GONE. I know they were there because one of my team mates at adepticon ran them! (somewhere a Texan I know screams in the night)

Along with the nerf coteaz got, this army went from being hard to use/bad to just garbage on its own. Really, it only exists now to be mixed into the Imperial Soup. Sorry. 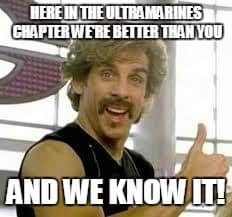 I know this is really temporary, but anything other than Vanilla Marines on both the loyalist and chaos sides lost a lot of flavor for now. Really all their flavor. With no chapter tactics any more all the individuality is gone.

There are a few characters here and there that give aura effects, but this are trivial at times and none are really army influencing. At least SW, DA and BA have numerous characters and can distribute them across the field, but something like Raven Guard or Salamanders really got hit. 1 Character each with a small 6″ bubble. And if for any reason you don’t like playing that character, well then all the flavor is gone.

On the Chaos side, it really stink that they have been waiting for Legion rules for ever, just to have them stripped away. I know the Death Guard in particular are hurting right now with apparently lack luster rules in the Dark Imperium box AND they are unable to give the Death Guard keyword to many characteristic units, like Terminators, meaning that what ever characters they do take don’t even transfer their rules to such fluffy choices.

Hopefully we don’t have to wait to long for codicies. Then again, I am kinda sore that I had to already discard all my 7th ed books, now buy an Index and then will have to buy yet another book to get my real rules.

Bolters
The workhorse of marine armies, the most common army in the game. It isn’t that they got worse necessarily (though everything with a 5+ or 6+ armour save is rejoicing)… its that everything is just so much… well better.

The opening of the “Everything wounds everything” is what really takes it down a notch. Lets compare to a lasgun. Against T5 they now wound the same. T6 and 7 the bolter has the slight edge, but T8 or above they are the same again. And it is looking like T8 is a pretty common “Big Guy” or “Vehicle” threshold. So point for point, you are paying more for the Bolter than for the Lasgun (sure they are both 0 points, but that means the cost is built into the model, not the weapon). 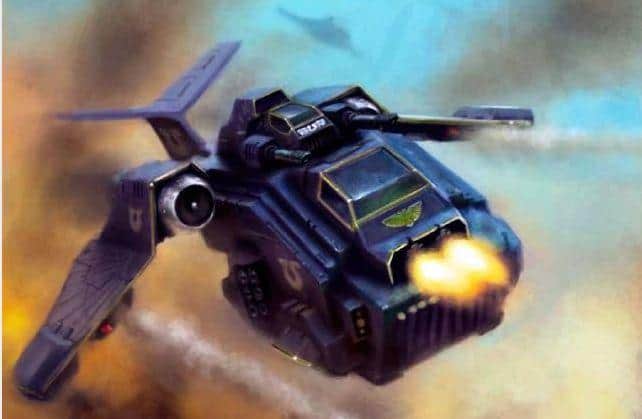 So here is the thing, min/max move with 90 degree turns kind of sucks on a 4/6′ table. Because now the edge of the table is literally oblivion to flyers.

Imperial pilots won’t care too much because they largely have hover as a back up plan. And they will also be too busy shooting the massive amounts of twin-linked weapons they always seem to have…..

But everything else can literally check mate itself if they’re not careful.

The eradication of fire arcs has given flyers a pretty good edge. But the changes to hard to hit, still being always visible to everything on the table, being assault-able, and the infinitely tall brick wall around the table. It’s going to be a rough transition. 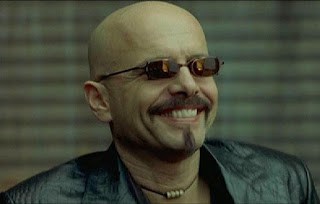 This isn’t the Cypher you are looking for, but he might as well be now….

Cypher like a lot of characters suffers from the chronic rules trim down of 8th edition. Largely in 7th he was a support character, actually counter to fluff.

He lost all of that and now just shoots people. He does give fallen a rule….. which they also have naturally themselves if they stay stationary….. And he can be taken with Dark Angels…. (somewhere a Texan I know STILL screams in the night)

You could argue that this is good for him as a person, well not that last part. But it doesn’t change the fact he massively lost a lot of force multiplication bonuses he gave to your army when you took him in 7th.

Last edition they were a heavy support choice, were you could take 1-3 marksmen and 3-9 drones. Now the marksmen are a 1 model elite choice and the drones are a 3-6 heavy choice. I accept that characters are now going to be separate (not that marksmen were ever characters), but this is literally equivalent to taking a sergeant out of a devastator squad and saying he goes somewhere else.

Now before you freak out and go look, they didn’t do that for devastators.

Hilariously its a great change for the marksmen, just crappy for the drones and FOC. Yes you can inflate the amount of detachments you can take. But how long before the tournament circuits start putting limits on that?

Sniper drones already had to compete with Broadsides and Hammerheads, in 3-4 years of playing I’ve only seen myself play them. Now they have to compete with that and Riptides, Ghostkeels, Crisis suits (no longer being a troop choice), Bodyguards, and stealth-suits. Couple this with the fact they lost rending, BS5, and 2++ cover save, they kind have moved further from being included in tau lists.

It has yet to be seen how vital the Sniper Rule will be. But with that low bs… will it be worth it?

It is really in comparison to other units that this unit really fails. In particular their closest fluff and game counterpart- Khorne Berzerkers.

The new Berzerkers have 1 more strength than DC and other wise have the same stat line. They cost one point less (16 to DC 17). Berzerkers can be troops in World Eater armies as well.

Special rules wise Berzerkers get the Death to the False Emperor (on a 6+ to hit, gain 1 more attack vs Imperial targets) and they get to fight twice in the Fight Subphase.

Arm them with a chainsword and chainaxe and that would be 4 S6 attacks, 2 S5 attacks and potentially 1 additional attack (with the chainaxe that is one more S6).

Death company get 3 S4 attacks, 4 if they charged (black rage), and a bolt pistol shot. They also have a 1 in 6 chance of ignoring a wound. That is a 6+ FNP essentially. In 7th ed, they got +1S for charging, had 3 attacks, 5 if they charged (Rage), and a 5+ FNP. And Chaplains let them Reroll hits and wounds… in 8th its just hits.

In 8th they get to reroll morale. In 7th they were just plain fearless.

Pretty much completely dumped on. The only way to get them back to a portion of what they did is to surround them with characters now. And still Berzerkers do more damage output. 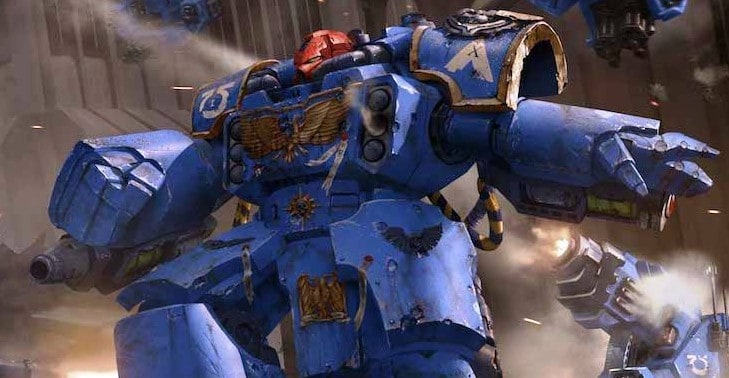 Haha everything has more wounds! And your stat line got dumped on! Once again are the days where melta and lascannons will reign supreme.

But you’re free from the bondage of salvo, so there is that.

So, who are your biggest “Losers”? Tell us in the comments.

NEXT ARTICLE
GW’s New Releases & Pricing Confirmed »
If you buy something from a link on our site, we may earn a commision. See our ethics statement.