The Armor of The Horus Heresy: MK V Plate Lore

Come see the armor that’s named after the Horus Heresy: The MK. V Heresy Armor – the most sinister of Astartes equipment.

As the Heresy rages, supplies and armor has to be salvaged and combined together to continue the fight. The result was the Mark V Heresy Armor.

Power armor is fully sealed, isolating the wearer from the outside environment and protecting him from gas weapons and harsh atmospheres. It also commonly includes numerous auxiliary systems such as communicators and auto-senses. The backpack contains the main power plant, environmental system and additional stabilizers. Whilst power armor is most commonly associated with the Adeptus Astartes, the Sisters of Battle and many Inquisitors also use powered armor of one sort or another.

Typically however these armors may not contain the same strength-enhancing properties or life-support functions of Space Marine power armor, nor do they provide the same amount of protection. All armor may further be augmented by various artifacts, relics and enhancements such as pauldrons and greaves. Power armor has been in use since before the Age of the Imperium, from the techno-barbarians of Earth to the original Space Marines created by the Emperor. Over the history of the Imperium, power armor has developed into many different forms. Need, circumstances and recovery of new materials and technology has shaped the armor’s evolution. 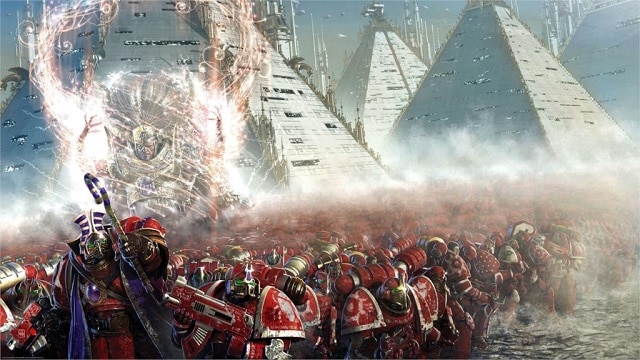 The equipping of the legions was only partially complete when the Horus Heresy broke out. Many of the Legions that had just been fully equipped with Mark IV armor turned against the Imperium while many of the loyal Legions had been deliberately starved of access to it and and remained operating with the older Mark II and Mark III armor. Additionally, even the Legions equipped with Mark IV suits quickly found themselves low on spare parts and unable to manufacture replacement units. With war damage and mobile operations, resupply for damaged equipment was difficult or impossible.

Marine artificers and Techmarines had to use old style equipment from older models to keep the legions fighting, as well as salvage from slain enemies and unorthodox innovations of their own. This ad-hoc assemblage of various armor mark segments (including new or unofficial design elements) being created by a multitude of legions resulted in an entirely new mark of armor being ‘accidentally’ created; these previously non-standard, emergency/stopgap designs were retroactively termed as the Mark V once production of the Mark IV was halted and the design for the subsequent Corvus Armor mark (Mark VI) was finalized. 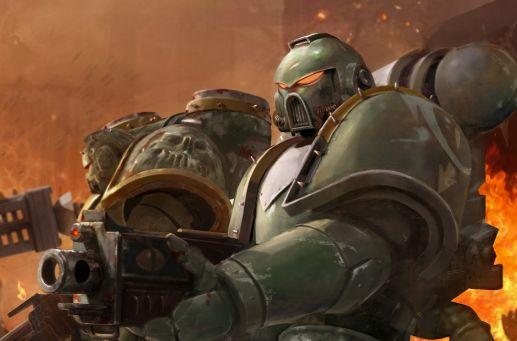 Some form of standardization across Mark V suits is is notable, despite their apparently random creation and individual varied origins, due to the dissemination of molecular bonding techniques across the legions. These techniques were developed due to battlefield experience in fighting other Astartes; Astartes plate needed to be proof against their own penetrator weapons, and it was discovered that power armor would benefit from additional reinforcing in this regard. All sorts of improvised additional armor can be seen on Mark V suits, but the most common technique was affix additional layers of armor with the aforementioned molecular bonding studs.

This relatively quick and simple technique effectively added another ablative layer to marine armor suits. The extra weight this generated would prove considerable, however, which placed a strain on power supplies. As the addition of extra power generation sources and cabling would just require more armor plating, catching the design in an eternal circle, the wearers of the suit was forced to either deal with the additional weight, or turn up the power output of his backpack but suffer extreme heat output, which not only would prove uncomfortable and even compromising in certain situations, and in many cases older, heavy power cabling was used, which created a weak point on the chest. 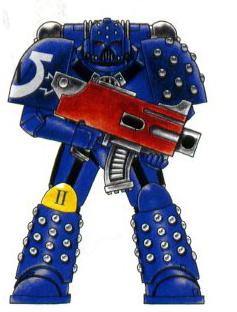 Many Mark V suits ended up featuring an unusual helmet design appropriated from supplies generated by the Tactical Dreadnought Armour program; this spin-off helmet featured similar levels of improved auto-senses as Terminator suits, but was still found to be inferior to those of Mark IV suits. The respirator used for this helmet was codified as the Mantilla-pattern, and saw use as early as late M30. The Mark V would be the most common armor mark visible during the Horus Heresy, by its nature as a mark resulting directly from the concerns of that galactic civil war.

As a result, the Mark V is commonly called the Heresy Suit and is distinguished by the molecular bonding studs often seem on areas such as helmet, shoulder plates and greaves. Few Imperial Space Marines are ever seen in Mark V suits today, as the loyalist Chapters either broke up these suits for spares or purposefully destroyed them after the Heresy was over. In contrast, many Chaos Space Marines still wear Mark V armor by default, either because they still possess their original suits or because they are forced to scavenge equipment. This power armor carries resonances of the Imperium’s darkest hour and its greatest victory. Battle-Brothers will offer the wearer their respect. However, members of the Inquisition are instinctively suspicious of any connection to the Horus Heresy. 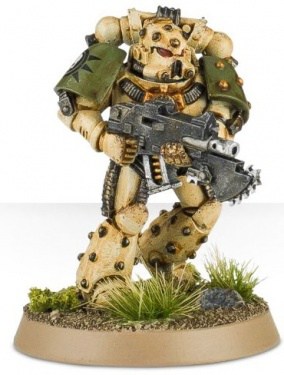 Find Out More About the Mark V Heresy Armor 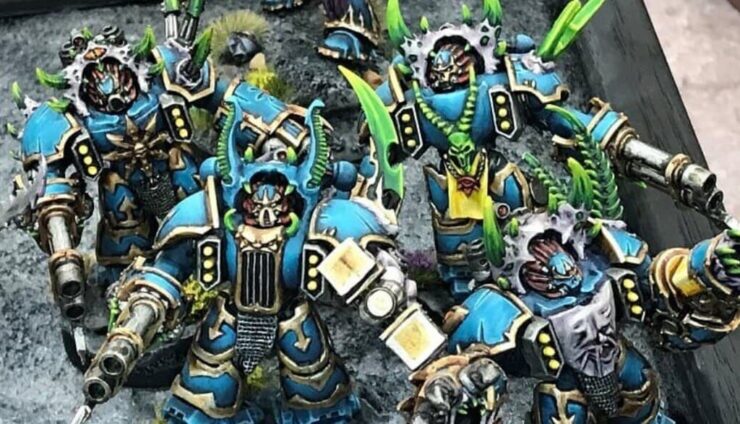 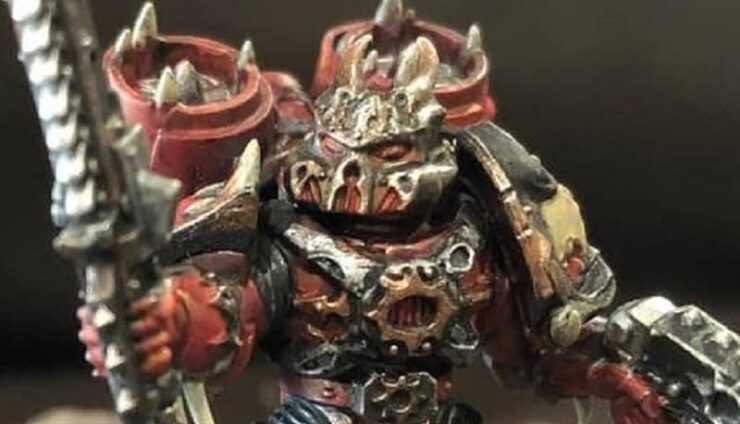 NEXT ARTICLE
Raptor Attack: Chaos Army of One »
If you buy something from a link on our site, we may earn a commision. See our ethics statement.