Today we take a look at Ailill Nuada, a traveler, and performer of many galaxies. She is also a deadly Harlequin warrior. Learn more in today’s Lore.

In battle, the mirrored mask of this Shadowseer is believed to show you your own death mask. A theory that no one has lived to confirm. Let’s learn more about Ailill Nuada.

As a member of the enigmatic Eldar caste known as the Harlequins, Ailill Nuada is a riddle even to her fellow members of the Conclave of Tears. The Harlequins are uniquely placed within Eldar society, for they rise above any stresses that might exist between the different factions. Where the Eldar of the craftworlds might be loath to seek the aid of their dark kin in Commorragh, for example, the Harlequins treat both exactly the same. Outsiders often make the mistake of assuming this is a matter of good and evil, with the people of the craftworlds somehow representing a morally pure side of the Eldar psyche, and the Eldar of the Dark City representing the polar opposite. This typically human point of view might amuse the Eldar were they to spare a thought for its existence, though it does contain a grain of relevance. Whatever the peculiar realities of each faction, whether they exist in a craftworld, Commorragh, or indeed on an exodite world, the Harlequins are far above any internecine struggle. 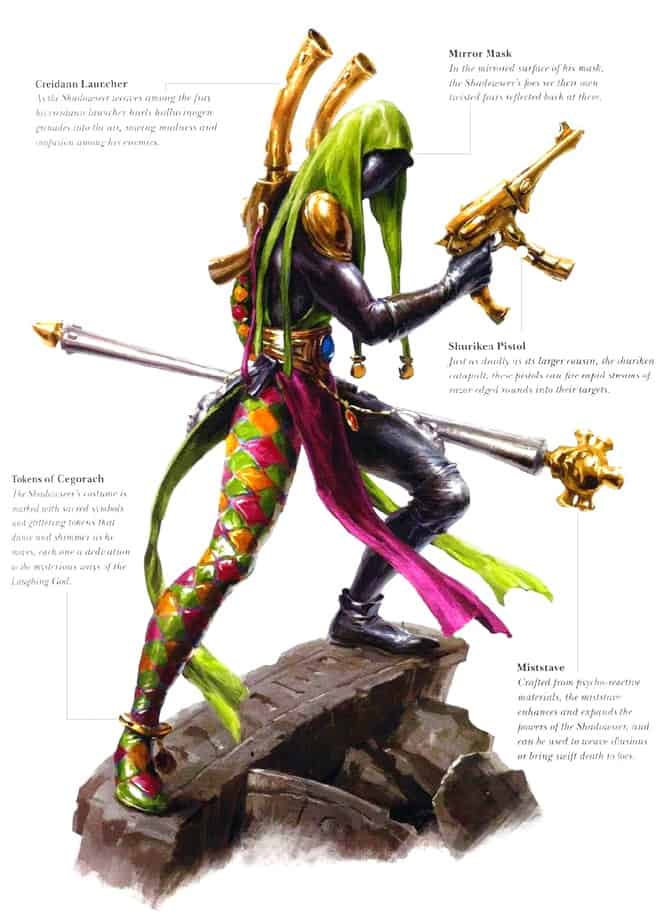 The Harlequins travel from one place to the next, performing highly formalized and ritualistic dances so as to remind the Eldar of the events of the Fall. As a species, the Eldar experience reality on a level no other mortal can imagine, and so these performances are far more then entertainment. They ritually bind together the entire species, and some say they provide a means of staving off the complete collapse of the Eldar people.

All Shadowseers are masters of the psychic arts. During their performances they play the role of the storyteller and the wizard, using their powers, as well as an array of psykactive hallucinogens, to deepen the audiences’ experience to an unprecedented degree. On the field of battle, they use both abilities to sow terror and discord amongst the enemy, leaping from one confrontation to the next as a scintillating blur of cascading light. 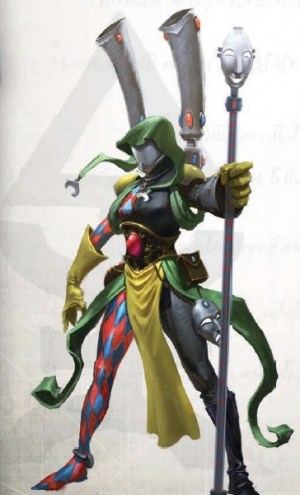 Ailill Nuada is such a performer and a warrior, and she has traveled with the Harlequins for countless centuries and visited every last remnant of the once mighty empire of the fallen Eldar. She has performed for Eldrad Ulthran under the pulsating violet luminescence of the Eye of Terror in the Dome of Lamentations on Crafteworld Ulthwe, and gone before the court of Asdrubael Vect in his throne room at the heart of Commorragh. Yet, Nuada appears to have taken leave of her role in order to focus upon the mission of the Conclave of Tears in the Jericho Reach. It is rare for her to know the company of fellow Harlequins, though on occasion they have answered her silent call to oppose the foes of the Eldar in the Outer Reach.

The Shadowseer is an utter mystery to the masters of the Dead Cabal, for none have laid eyes upon her and survived to tell the tale. She is known to them only by certain portentous readings of the Emperor’s Tarot, and by rumors torn from the minds of recalcitrant outcasts and reavers dragged from their lairs in the Outer Reach. All the Dead Cabal can ascertain of this mysterious individual is that she is, somehow, the binding force that keeps the Conclave of Tears united in its dread mission, whatever that may be. Though no one member of the Conclave can be said to be its leader in any accepted sense, Nuada is nonetheless its figurehead, or the fulcrum upon which the entire mission balances. Needless to say, the masters of the Dead Cabal have long considered what might happen were the Shadowseer to be removed and that balance upset, though in many ways they fear to attempt such a drastic course of action. 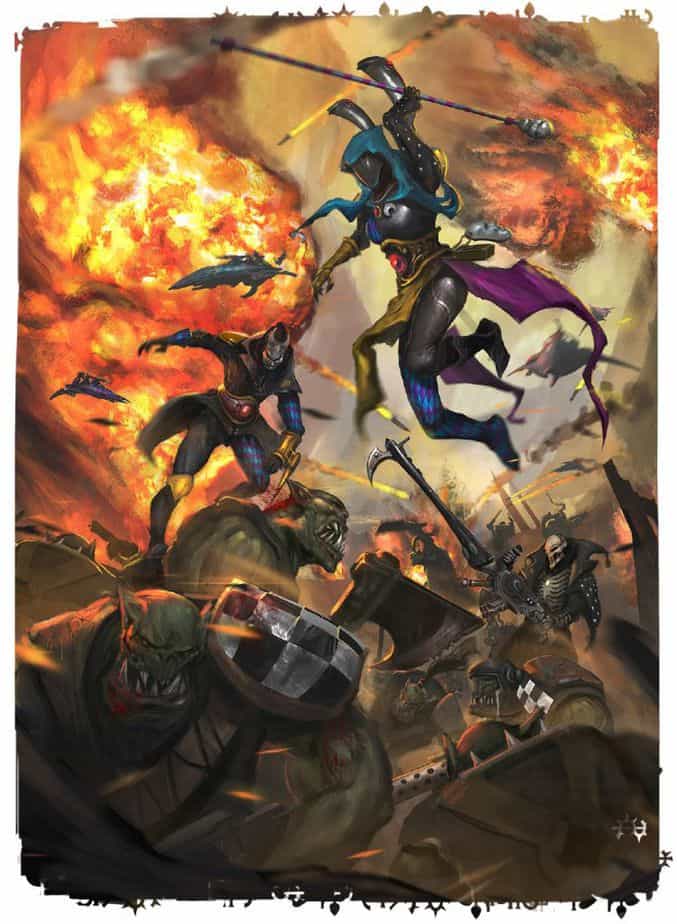 As with all Shadowseers, Ailill Nuada wears a featureless mask finished to a silvered, mirror sheen. Nuada has never removed this mask, and so none, even amongst her peers in the Conclave of Tears, are known to have looked upon her true face. Instead, when each looks upon that mirrored mask, that individual see something different. Some see what the wearer wants them to see, others what they themselves want to see. During a performance, this mask takes on a myriad of identities, as is appropriate to Nuada’s role of the personification of fate. During battle, when Nuada is performing the so-called Dance of Death, the mask reflects back upon those unfortunates that see it a terrifying range of faces. It is said that many see their own deathmask in that reflection, though, if this is true, none have ever confirmed it, for all who gaze upon it die within moments.

Though none know it, Ailill Nuada is in fact the most active of all of the members of the Conclave of Tears. She travels extensively through the dead systems of the Outer Reach, seeking to piece together the separate elements of what she knows to be a dark fate slowly creeping across the region. Alone of all her peers, Nuada recalls the face of that which slumbers beneath the surface of the dead worlds of the region, for she looked upon it when last it stirred. She knows what is soon to awaken, and she knows the steps that have been taken to ensure the powers that hold sway in the galaxy remain in balance, though each will suffer undreamed of destruction in the process. 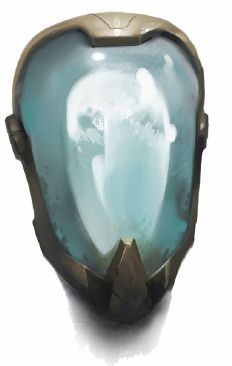 Find Out More About Ailill Nuada! 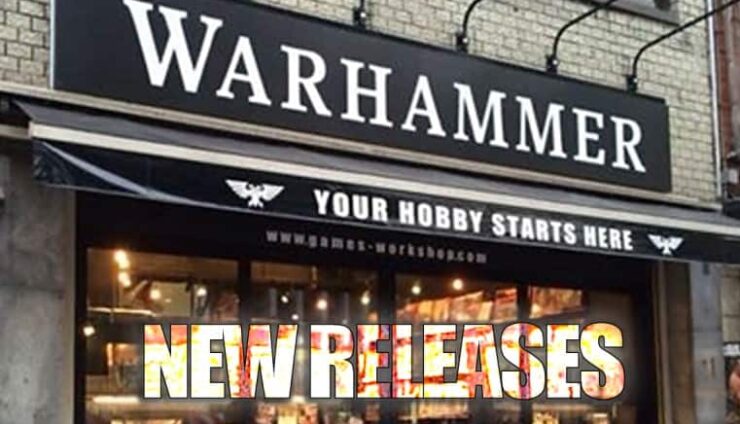 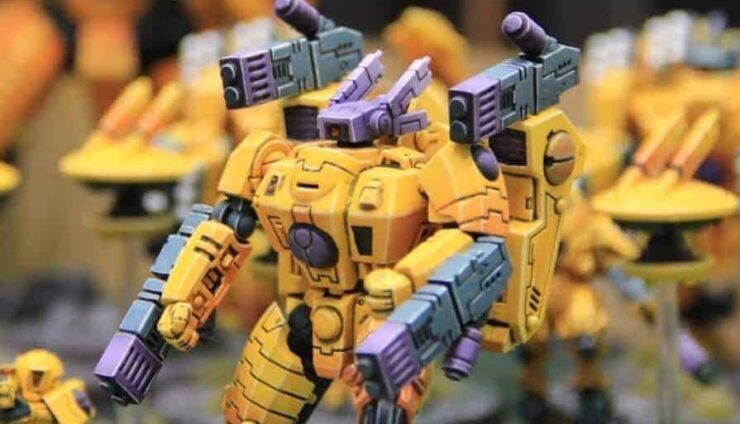 NEXT ARTICLE
Burnt Orange Tau For Burnt Enemies: LVO 2020 Army Showcase »
If you buy something from a link on our site, we may earn a commision. See our ethics statement.