Warhammer Community dropped their rules teasers on what’s ahead for the Space Wolves in Saga of the Beast. However, earlier on we also saw Ragnar’s datasheet begin to make rounds across the web.

Get caught up on the latest for the Space Wolves with a quick look at Ragnar’s new stats. 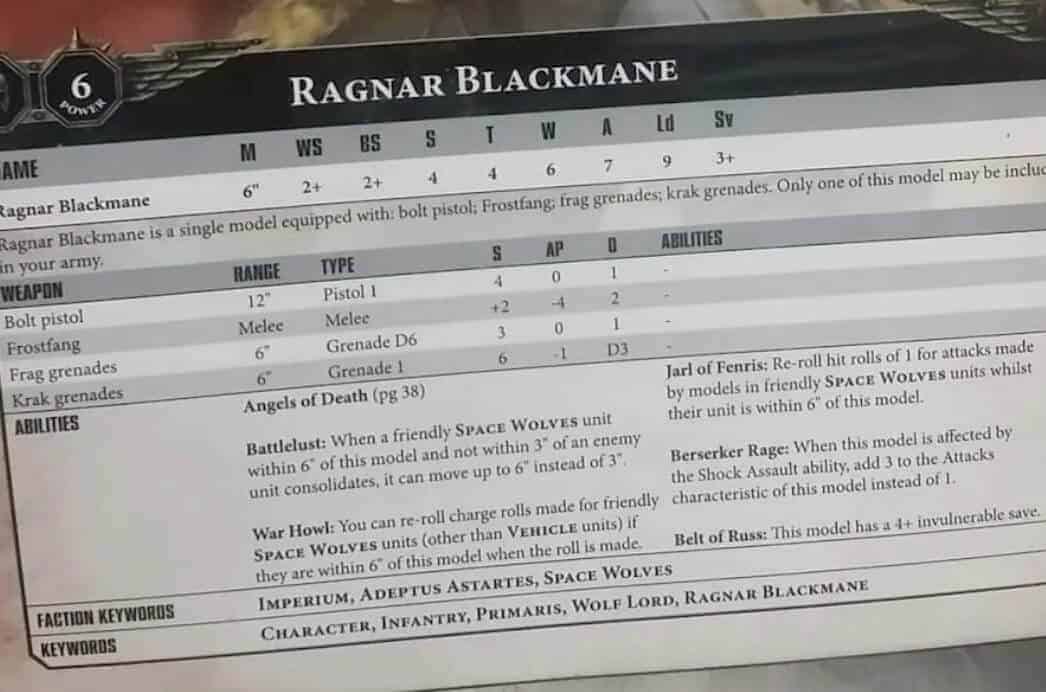 Looking at the latest datasheet making rounds across the web, Ragnar is looking spicy. On base stats alone, he’s gotten +1 Wound and +2 Attacks. On top of that, Frostfang got +1 Strength and  +1 bonus damage, perfect for melting through Primaris armor.

Now Ragnar still being Ragnar, he’s got all the bells and whistles he had before. The Belt of Russ is still giving him a 4++. War Howl still gives a charge reroll aura. Etc. Etc. However, probably one of the biggest changes to Ragnar is his new Berserker Rage rule. Shock Assault normally gives you +1 attack on the charge, but this man is extra angry and adds +3 to his attacks. That brings him to a whopping 10 S6 -4 AP 2 Damage attacks on the charge.

New Space Wolves Rules in Saga of the Beast 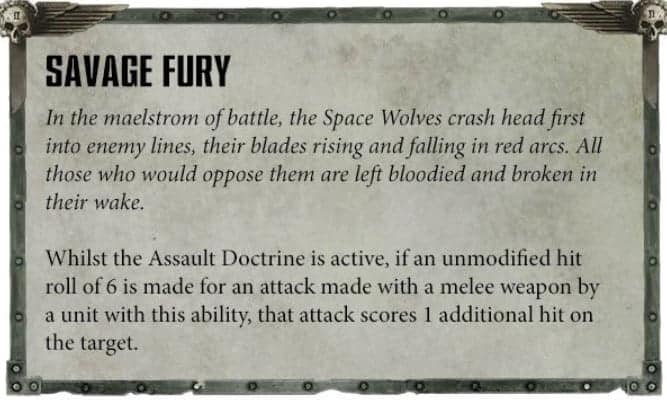 Space Wolves are another Chapter whose rules don’t “turn on” until the third turn. Looking at their doctrine bonus, they get exploding 6’s to hit in their update. Unfortunately, it’s just an unmodified 6 to hit which means their Chapter Tactic won’t play much of a roll to help at all. 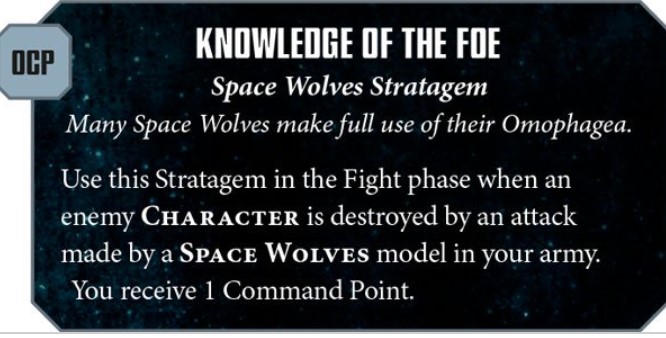 The sons of Russ will also be able to make use of a whopping 24 additional Stratagems! Some of these Stratagems, such as Duty Eternal (making your Dreadnoughts super-tough) and Veteran Intercessors (for +1 Attack), will already be familiar to many, but there are some powerful new additions that are unique to the Space Wolves.

Moving into some of their previewed stratagems, Knowledge of the Foe is the army’s built-in way of farming CP. You just need to pick on the enemy’s characters. Pretty sweet. Plus, it may be our first 0CP Stratagem we’ve seen. 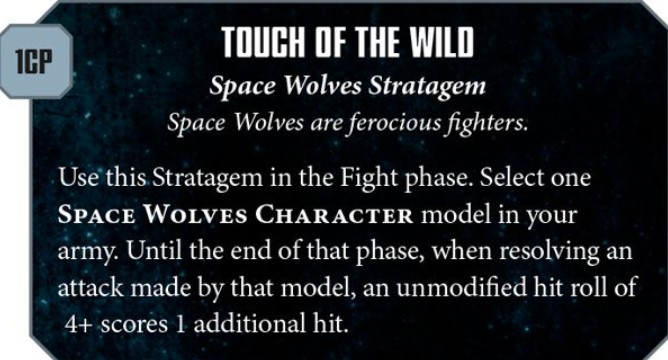 For Touch of the Wild, you will basically net 50% bonus hits for whatever your character would normally connect with. With that said, Ragnar gets 10 attacks on the charge. Just pop this strat and you could be looking at a potential 15 hits or more if you roll right. 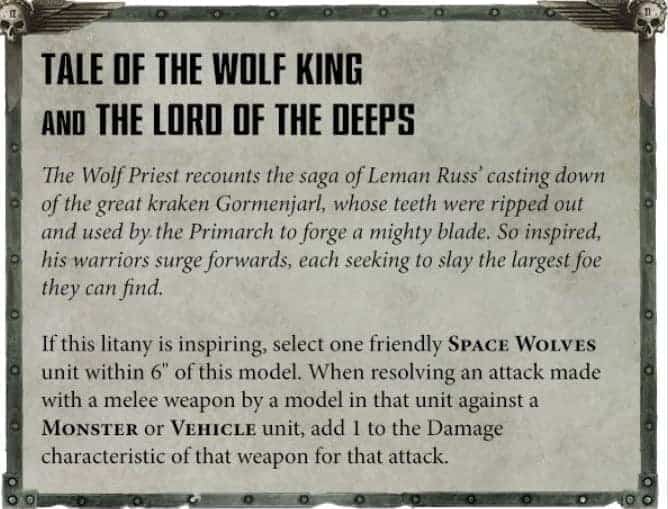 This litany really puts the smackdown on Monsters and Vehicles. If you’re rolling deep with a few Wulfen squads in your list, you can make those thunder hammer swings do a whopping four damage a pop. That’ll topple a Knight in seconds. 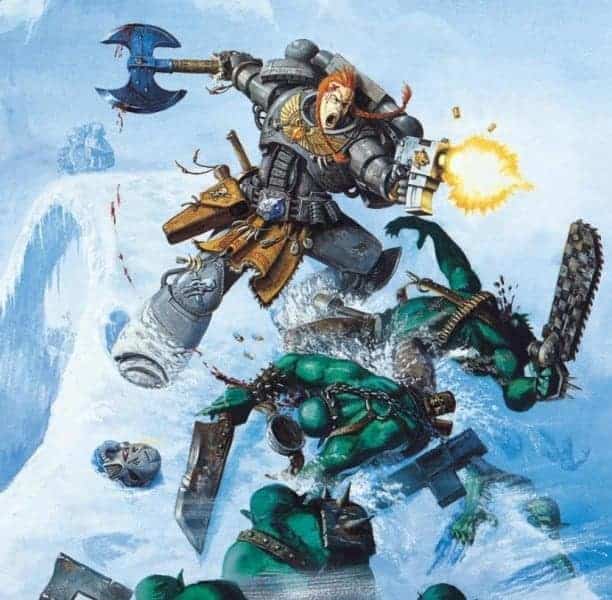 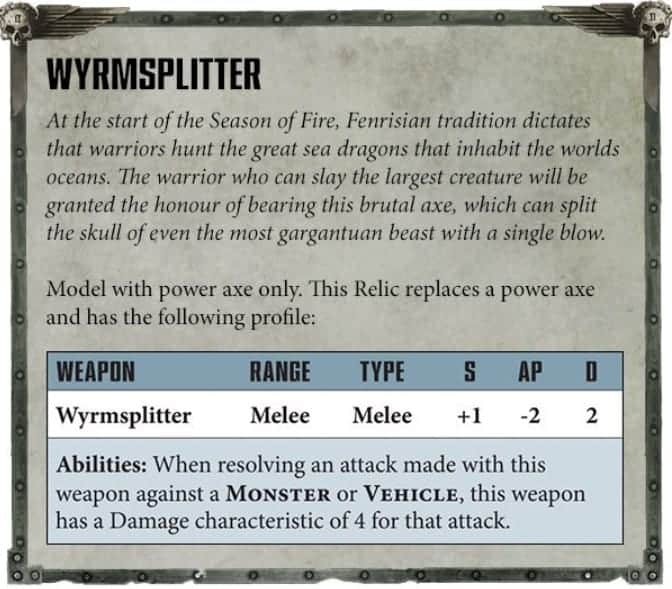 We could be seeing modified Smash Captains come to the Space Wolves (with the model obviously replacing the thunder hammer for Wyrmsplitter). This is a power axe, but slaps REAL HARD against the things you want to normally kill i.e Vehicles and Monsters. The only problem we can see players running into is that it’s only +1 Strength which does hurt. 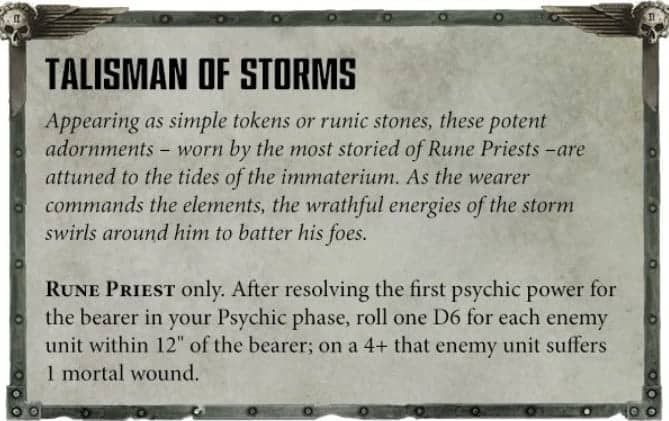 If you’re going to be slinging spells, you can also give the Talisman to a Rune Priest and have him zap every enemy unit within 12″ with a mortal wound on a 4+. It might not seem too impactful, but if he’s positioned right and you get some good rolls, he can deal in the area of 8-12 mortal wounds in a game.

With a first look at the Space Wolves, they’re also shaping up to be a really nasty force to deal with- especially in the fight phase.

What kind of other combos do you think are lying inside the book? Will Ragnar be an auto-include? Do Space Wolves deserve a Chapter-exclusive Primaris unit that’s not Ragnar? 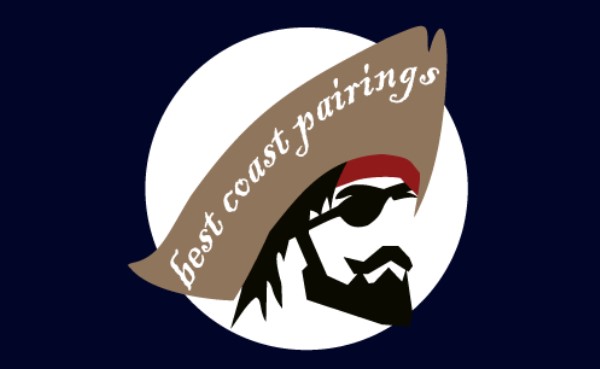 PREV ARTICLE
« Save $10 on a Best Coast Pairings Subscription 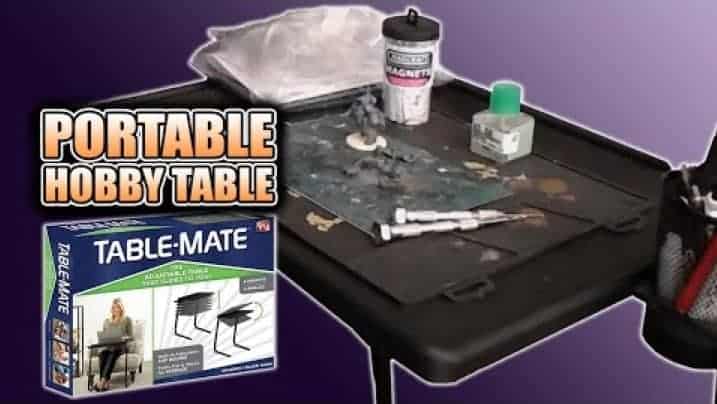 NEXT ARTICLE
Best Portable Table For Hobbying & Painting Miniatures »
If you buy something from a link on our site, we may earn a commision. See our ethics statement.