Greetings fellow wargamers!  Today I have an unusual conversion for you.  As some of you may know, WMG has been working on a studio Necron/Chaos allied army for a while.

This army is partially based on the Egyptian themed (well, mostly, in fact) but also because I LOVE aspects of both armies!  I really like Thousand Sons, in particular, but I find that as a unit they need some love from other choices as well.  Thousand Sons are great, but an army of them won’t win you the game.  AP3 bolters don’t do crab to terminators or the like. 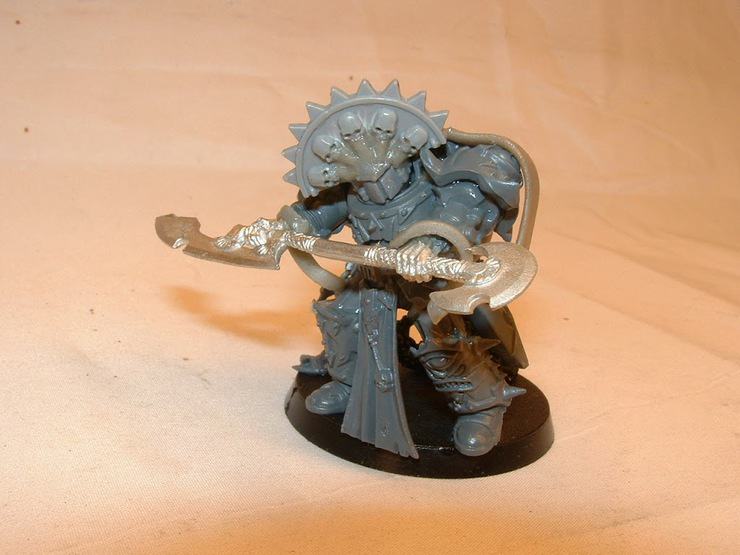 For this army I really wanted to incorporate some ‘mummies’ in the mix.  Nurgle Zombie Cultists are a great way to do this.  FNP, S&P, and only hand weapons work just as great for 10,000 year old burial shrouded guardians as they do for Romero loving cultists.  However, the problem was how do I get Typhus into the army without him looking so . . . Nurglified.  The answer was to convert up a Chaos Lord to stand in for Typhus.  And so, Ramses was born. 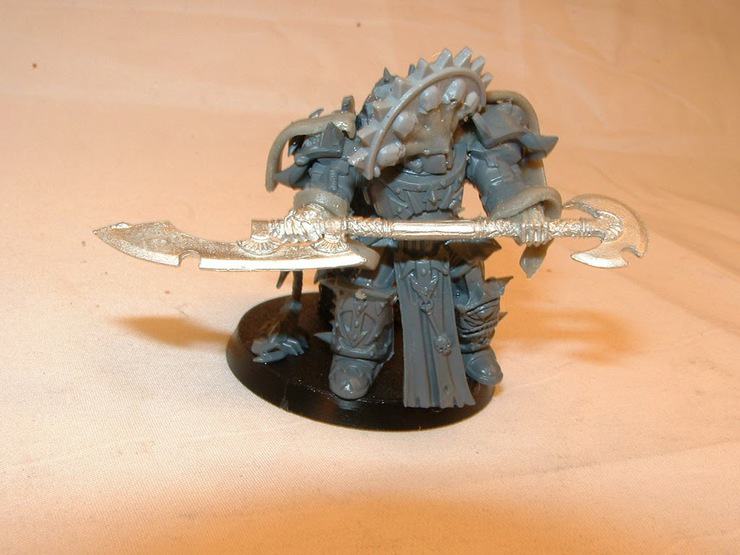 The ‘hive’ that Typhus usually uses was easily represented by a cloud of scarabs pouring out of Ramses’ vent on the rear of his armor.  I imagine most of the time his body literally crawls with these flesh rending parasites.  For Manreaper. we used a glaive from the Tomb Kings Ashbati line of minis.  His headpiece is custom, using bits from the Tomb Kings chariot and a Chaos Space Marine.  Finally his bits of ‘shrouding’ are made from dried bits of grey stuff, cut into small, gauze like strips. 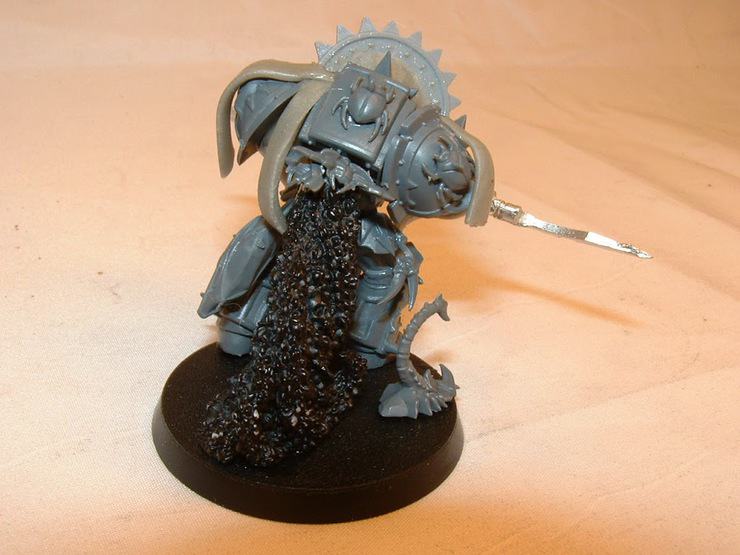 I’ve toyed with the idea of giving him more and more white bandages to really sell the ‘mummy not zombie’ idea for the character but I figured less is more for now . . . at least until I hear back from YOU guys.  What do you think?  Did I hit the nail on the head, or did I miss the mark? Would you by this as a stand in for Typhus in a Tzeentch themed list? 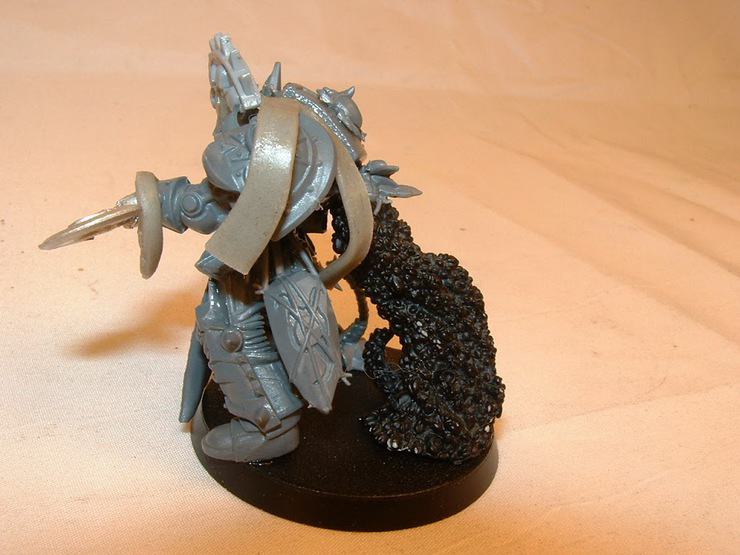 Now the question becomes, do I field some plague marines and use burial shrouded instead of bloated bodies, and do I use some Egyptian style swords instead of plague knives to simulate a mummy’s rot instead of poisoned touch?  I imagine these Plague Marines would harbor the curse of Ramses and turn their enemies to dust instead of rotting them with plague.  Or maybe the plague involved boils rather than pustules. 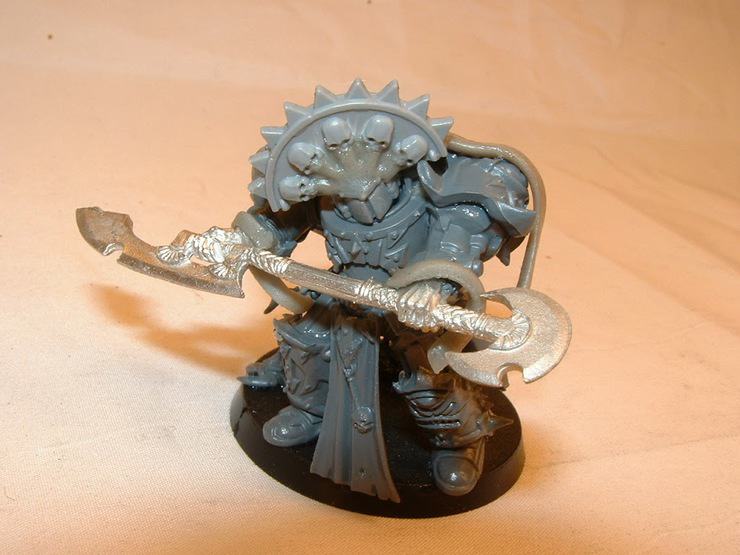 Chime in and give us your two cents.  My name is Caleb and I am a conversion artist for hire.  Visit White Metal Games or contact me at calebfilm@yahoo.com if you are interested in setting up a commission or inquiring about a figure for sale.  We are always happy to speak with potential clients.  And until next time PUT YOUR MINIS WHERE YOUR MOUTH IS! 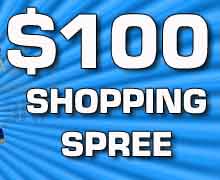 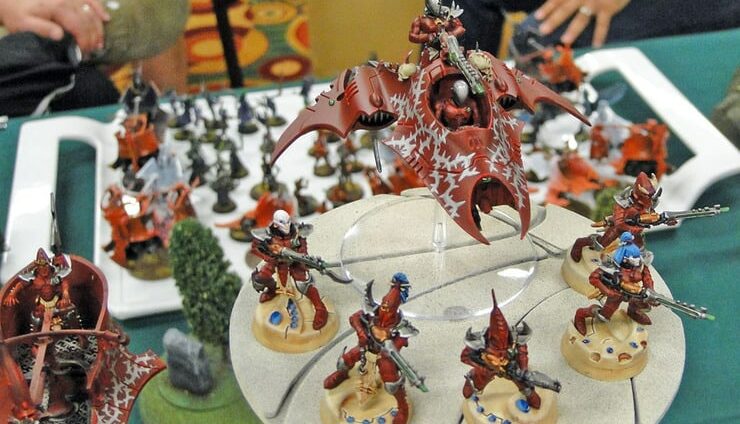 NEXT ARTICLE
Red Means Murder- WargamesCon 2012 »
If you buy something from a link on our site, we may earn a commision. See our ethics statement.