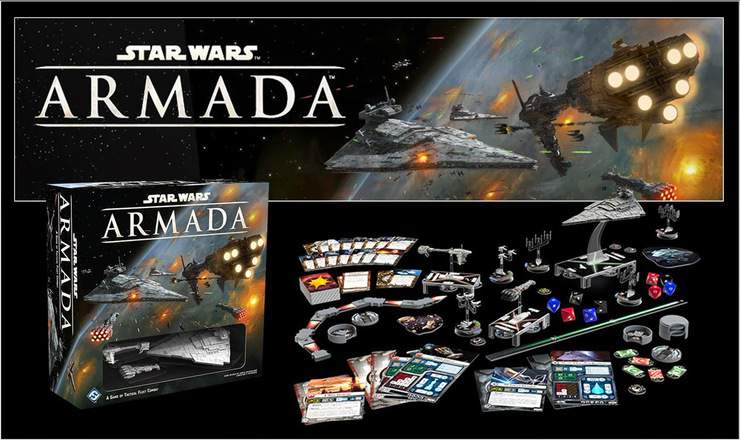 GSWE12
Star Wars: Edge of the Empire RPG: Fly Casual
$29.95 SRP SDI
Smuggling in the Star Wars galaxy is a high stakes job filled with danger and excitement. Fly Casual supports those men and women drawn to this lifestyle of opportunities, freedoms, and thrills by offering them a terrific haul of new character options, equipment, ships, modifications, and potential jobs. Moreover, GMs will find plenty of ways to incorporate smugglers and smuggling runs into their campaigns, even if none of their PCs have followed the Smuggler career path.
Fly Casual is a smuggler sourcebook for the Star Wars: Edge of the Empire Roleplaying Game. FFGSWM01
Star Wars: Armada
$99.95 SRP
SDI
Rebel and Imperial fleets fight for the fate of the galaxy in Star Wars: Armada, the two-player miniatures game of epic Star Wars space battles!
In Star Wars: Armada, you command the unmatched power of the Imperial fleet, or gain the opportunity to prove your tactical acumen as an admiral in the Rebel Alliance. Massive Star Destroyers fly to battle against Rebel corvettes and frigates. Banks of turbolasers unleash torrential volleys of fire against squadrons of X-wings and TIEs.
Assemble your fleet, survey your objectives, form your battle plan, plot your course, call your shots, and destroy the enemy. Armada balances the awesome scale of the Star Wars galaxy’s ships and space warfare with ship designs and rules that make for accessible, intuitive play experiences. It’s your job to issue the tactical commands that will decide the course of battle and, perhaps, the fate of the galaxy.
The Star Wars: Armada Core Set contains everything you need to get started, including the rules, an articulated maneuver tool, a range ruler, six command dials, nine attack dice, ten unpainted squadrons, and three pre-painted ship miniatures (Victory-class Star Destroyer, Nebulon-B frigate, CR90 Corellian corvette), plus more than 130 cards and tokens.
2+ players
Ages 14+
2 hours FFGMEC45
Lord of the Rings LCG: The Treason of Saruman Saga
$29.95 SRP
SDI
Join Aragorn and the Three Hunters for three epic fantasy adventures in The Treason of Saruman!
The third The Lord of the Rings Saga Expansion for The Lord of the Rings: The Card Game introduces 165 new cards, including three new scenarios that depict key characters, locations, and events drawn straight from the pages of the first half of The Two Towers. Even as you experience new adventures, you’ll find new deck-building options inspired by the expansion’s three heroes and thirty-nine player cards, including six new boons. FFGSWC20
Star Wars LCG: Chain of Command
$14.95 SRP
SDI
Stand beside Grand Admiral Thrawn and form your battle plans with Chain of Command, the fifth Force Pack in the Rogue Squadron cycle for Star Wars: The Card Game.
With ten new objective sets (two copies each of five unique sets), this expansion focuses on your cutting-edge starships and the ace pilots who fly them. You may challenge your opponent to a break-neck swoop race, make a profitable run on a smuggling freighter, or return to Luke Skywalker’s beginnings on Tatooine. FFGADN23
Android Netrunner LCG: The Valley
$14.95
SDI
In the world of Android: Netrunner, the American megacity of SanSan sprawls along the California coastline from San Diego in the south to San Francisco in the north. There, you’ll also find Biotech Valley, home to the world’s biggest biotech firms and its most advanced genomic research.
As The Valley Data Pack and its sixty new cards boot up the SanSan Cycle, you’ll explore this dynamic meatspace and the pervasive influence of its largest megacorp, Jinteki. In this realm of bleeding-edge bioengineering, you’ll find numerous assets, region upgrades, genetic resources, and a new Jinteki identity. FFGGOT113
A Game of Thrones LCG: The Blue Is Calling
$14.95
SDI
Ascend to the Eyrie and gaze down from the dizzying heights of its sky cells in The Blue Is Calling, the final Chapter Pack in the Wardens cycle for A Game of Thrones: The Card Game!
As its sixty new cards (three copies each of twenty different cards) bring the major themes of the Wardens cycle to their triumphant conclusion, you’ll find the House Arryn trait reinforced, a brutish jailor arrives to tend the sky cells, and new “limited response” abilities are added to the game. Now is the hour of the Wardens of the East! 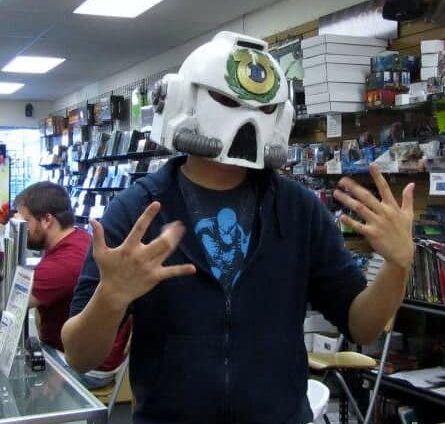 NEXT ARTICLE
ARCHAON RIDES! End Times Book 5 Rumors »
If you buy something from a link on our site, we may earn a commision. See our ethics statement.