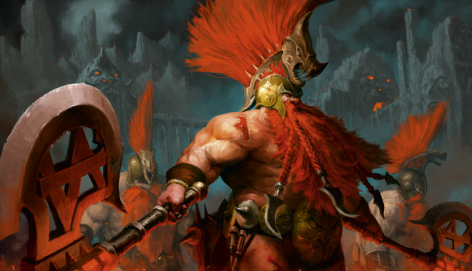 The Dwarves aka the mysterious Duardin look to be on the way in just a few weeks. Come see the latest from the White Dwarf come early!

Got next week WD early (the one with the new stater boxes, that are as crazy as what was rumoured). Hint at the end of the WD shall translate to “The eternal quest for ur-gold begins” or something like that.

And who can forget this new Duardin fyreslayer(?) that was spotted earlier in the year:

“This sprue was shown on the warhammer subreddit on reddit.com. Looks to be a slayer, or possibly even a chaos dwarf slayer, but also seems like it could be an ironsmith or forgefather of some sort. Wielding an axe in one hand, and a staff in the other, with a metal mask, and the iconic slayer mowhak. The sprue date is 2016. It was reported that this came in a box of Tau.” ~Dwarves, Coming soon to a shelf near you?

NEXT ARTICLE
GET FREE HORUS HERESY – Support Our Video Features! »
If you buy something from a link on our site, we may earn a commision. See our ethics statement.