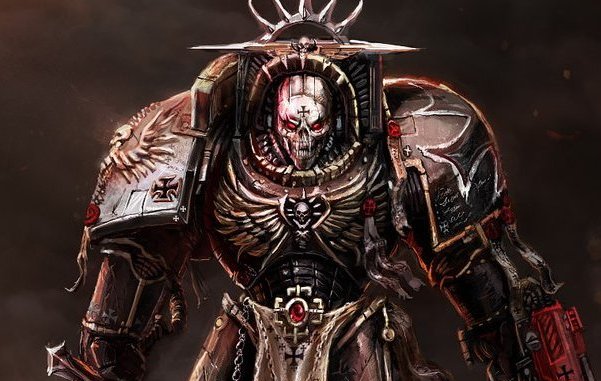 What happens when Skeletor and Bones arrive on the same weekend? A fun-filled time of xenos and heretic purging with a dash of healing on the side!

The Primaris Chaplain and Apothecary have finally arrived and we got our hands them. These kits retail for $35 each and, from what we can see, appear to be worth the price. If you don’t, then vote with your hobby dollars and give them a pass. The models have come shortly right after the Primaris Captain and Librarian releases, plus even more Primaris kits are set to come out a week from now. Here is a quick and dirty review to give you the lowdown on what you can expect to get from these kits. 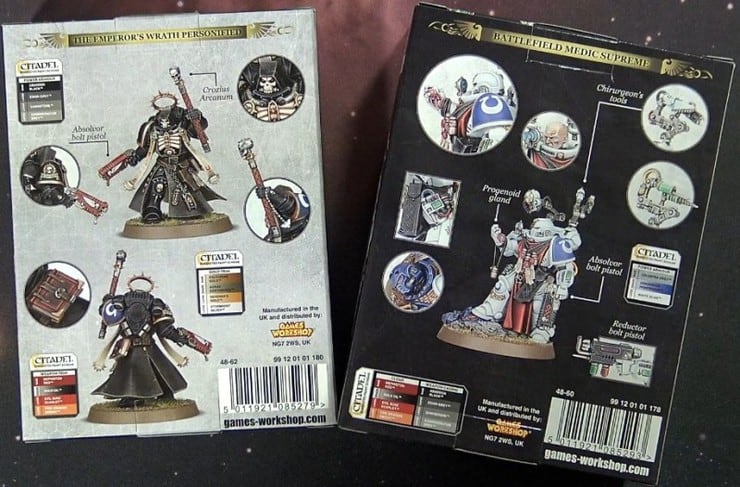 The Chaplain kit comes with one sprue and the Apothecary comes with two. The reason for this is the amount of customization and basing details that are included. An interesting detail is that the Apothecary model is holding the Progenoid gland and there is no other option for his right arm. The Chaplain is completely what you see is what you get. His sprue is simple and easy to put together, with legs that attach up into a two part torso.

There is some room for customization as the head piece is standard and the iron halo is an individual bit. He comes on a 40mm base with W5, S4, T4, and Sv+3. He is armed with an absolver bolt pistol and crozius arcanum only. 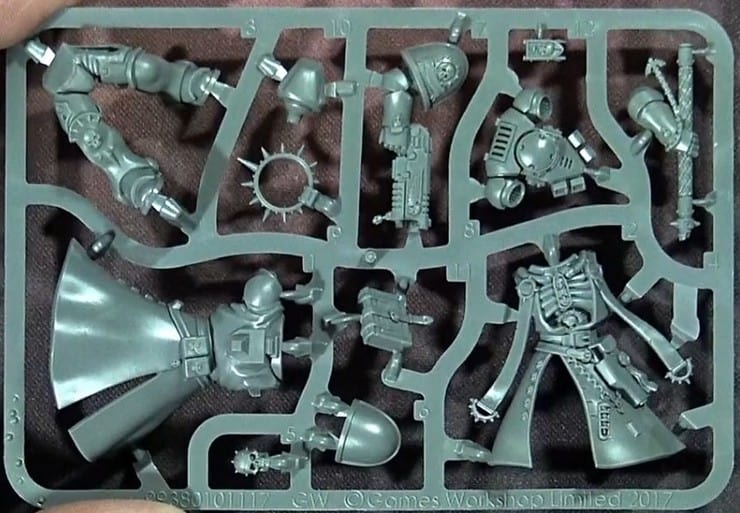 The Primaris Apothecary does assemble quite easily. He leg guard armor plates have to be attached to his legs but, other than that, he is the same multi-part model that we have seen with the other Primaris. He comes with the option of helm or no helm head pieces. His absolver bolt pistol and reductor pistol are included. The reductor pistol will require you to attach the necessary bits. He comes on a 40mm base with W5, S4, T4, and Sv+3. HIs base is a custom one with him posturing over a dead space marine after having removed the Progenoid gland. 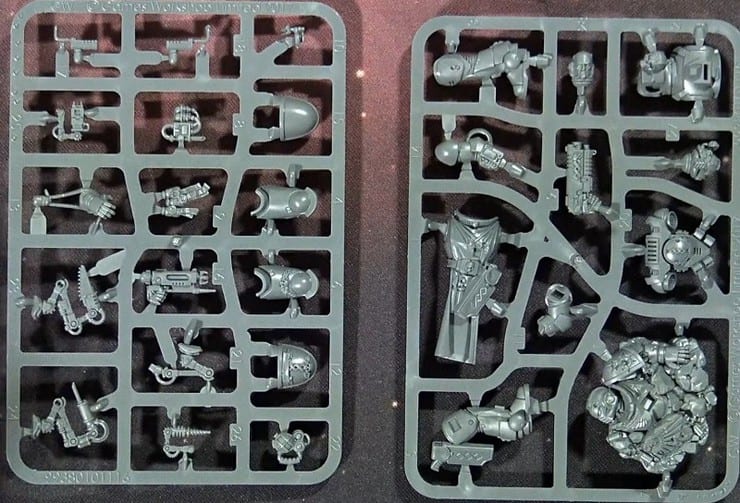 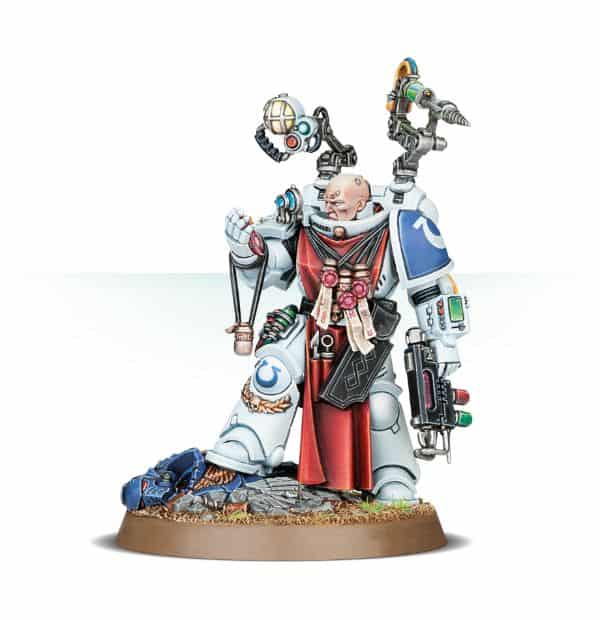 Amongst the most honoured Space Marines of a Chapter are its Apothecaries. It is their role to to mind the physical well-being of their battle-brothers – this is seen most obviously on the battlefield, where an Apothecary serves as an emergency medic. Their most important duty, though, concerns the dead; an Apothecary can harvest the progenoid organs from a fallen Space Marine, ensuring the creation of further warriors and the continuation of the Chapter.

This multi-part plastic kit contains the components necessary to assemble a Primaris Apothecary. Strikingly detailed, clad as he is in Mk X power armour, this miniature features far more accoutrements and gadgets than the standard Primaris Space Marine – as befits his battlefield role. Strung around the chest plate are several canopic jars, bearing purity seals: these are filled with progenoid organs that have passed his scrutiny, and will be used in the creation of further Primaris Space Marines. In his right hand he clutches a freshly-hewn organ upon which his gaze is fixed; another canopic jar hangs from his arm, ready. His left arm holds a narthecium, the grisly instrument of his craft, though this can be replaced with an optional absolver pistol (often the last thing a fallen brother will see…)

Adding to the detail and options of this kit are a selection of lamps and surgical inspection lenses, with a chainsaw, injector servo arm, drill and stapler amongst the possible modelling options. As a macabre narrative extra, a slain Space Marine is included with a huge incision made by the Apothecary’s narthecium, to be added to the base.

The Primaris Apothecary comes as 28 components, and is supplied with a Citadel 40mm Round base. The kit also includes a Ultramarines-Character Transfer Sheet, which features Captain, Chaplain, Librarian and Lieutenant iconography. 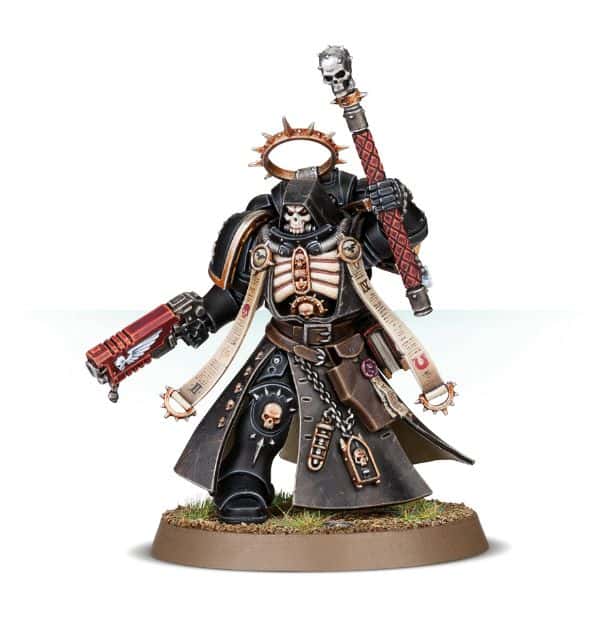 The spiritual leaders of their Chapters, Chaplains are awe-inspiring warrior priests who administer rites, preserve rituals and perform ancient ceremonies of initiation, vindications and redemption that are as important to a Space Marine Chapter as its roll of honour or skill at arms. Every Chapter has its own Chaplain, acting as leader in both devotions and combat and second only to the company Captain in rank.

This multi-part plastic kit contains the parts necessary to assemble a Primaris Chaplain. Wearing iconic jet-black Mk X power armour featuring unique greaves, he fights fiercely using his absolver bolt pistol and crozius arcanum. His hooded cassock lends him an air of sinister intensity, with plenty of spikes, chains, skulls and purity seals dotted all about. His helmet features a skull design and the chestplate of his armour is modified to portray an exposed ribcage – a reminder of the mortality that his enemies face. His backpack has an attached iron halo, whose 12 points aptly represent the High Lords of Terra.

The Primaris Chaplain comes as 12 components, and is supplied with a Citadel 40mm Round base. The kit also includes a Space Marines Character Transfer Sheet, which features Captain, Chaplain, Librarian and Lieutenant iconography.

The Primaris Chaplain and Apothecary are available now online and in local Games Workshop stores. Be sure to press play on our quick and dirty unboxing video below for the full review.

For more on the Chaplain, Apothecary, and all things Warhammer 40k, visit Games Workshop! 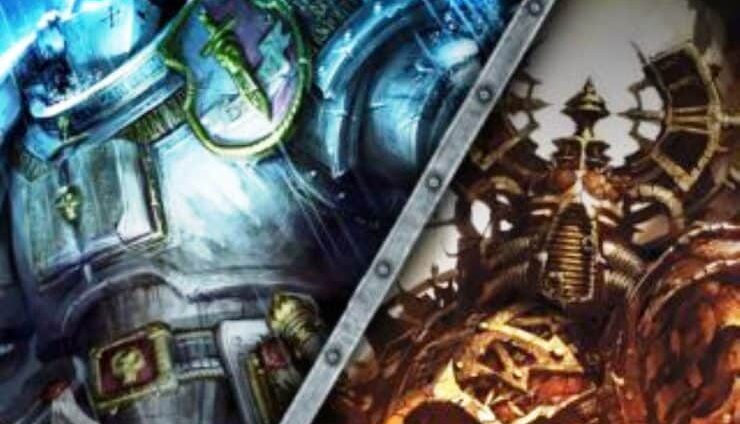 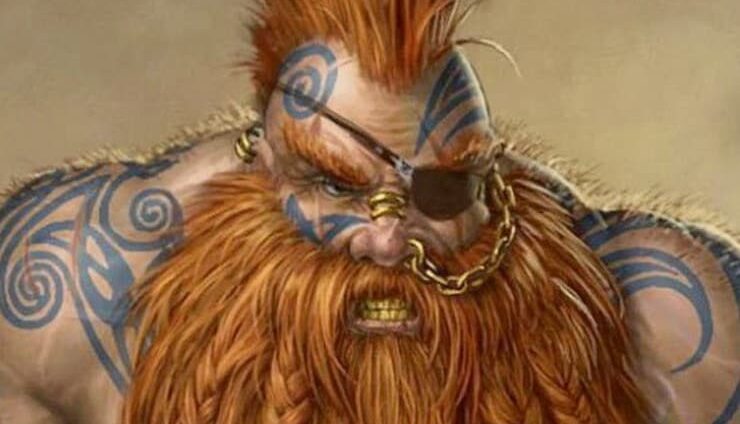 NEXT ARTICLE
One of Kind Sculpts Arrive From Avatars of War »
If you buy something from a link on our site, we may earn a commision. See our ethics statement.