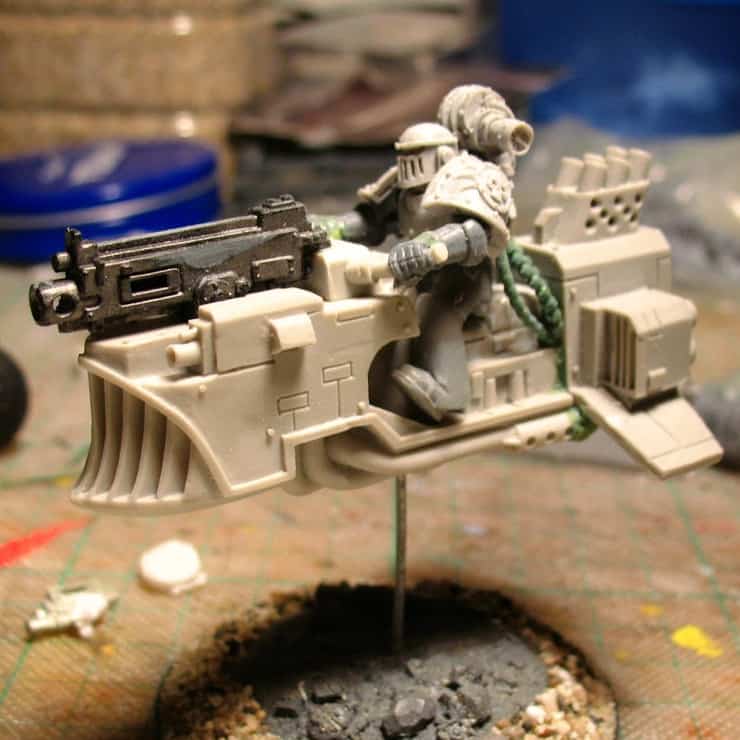 Cadaver here from Home Of Cadaver!

I have been working lately on my pre-heresy Legion Jetbikes squadron as part of my growing Death Guard army.

I intend to make my squadron as unique as possible, creating individual conversions for each model. The first model I created was based on the great Jetbike from Kromlech, a somewhat straightforward conversion  I used the stock model with the only exception of the Heavy Bolter from the Imperial Guard Heavy Weapons kit fitted on top (although I had to saw off the lovely targeting system) to match the rules of the Horus Heresy Army list and of course the rider. 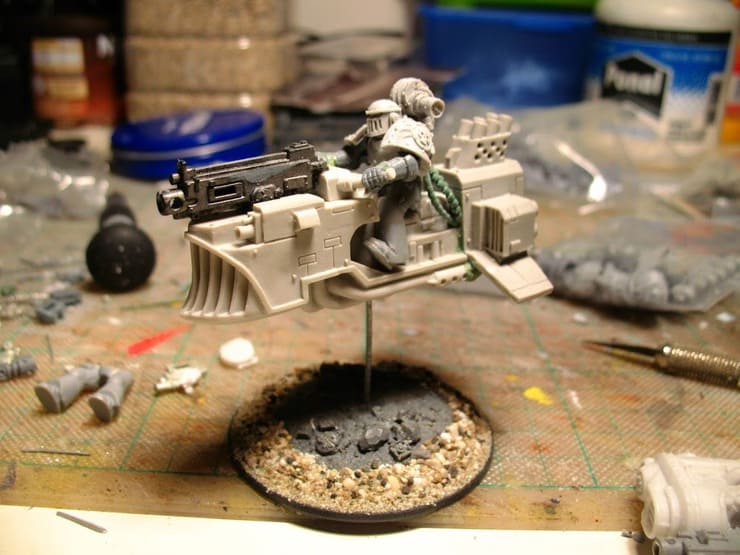 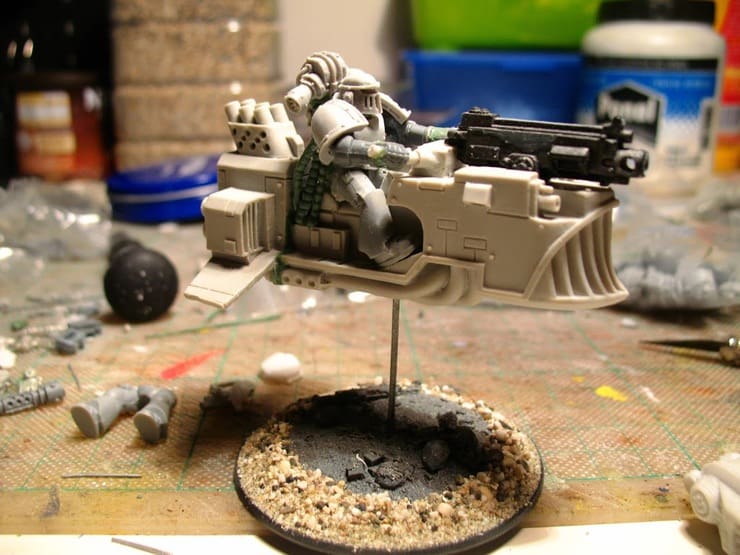 Last but definitely not least I used my technique for creating greenstuff tubing as in my Chaos Helldrake Conversion which can be revised mostly in one picture! 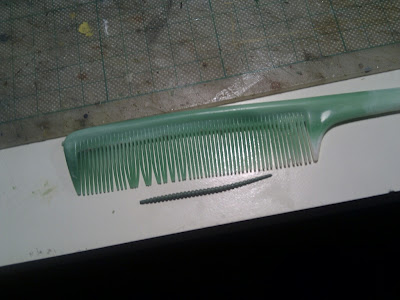 I have been meaning to use a specific kit for my next Jetbike, the Dystopian Legion Jetbike  mainly because I just love the model. Truth is I didn’t realize that it would need so much work to bring it to Warhammer status. It is significantly smaller than any other Jetbike model out there, and it has a weird angle due to its different propulsion system that comes from underneath the vehicle. Great idea but it doesn’t fit with what I want my bikes to look like. So I decided to make some heavy changes on this one..and the result was something like this 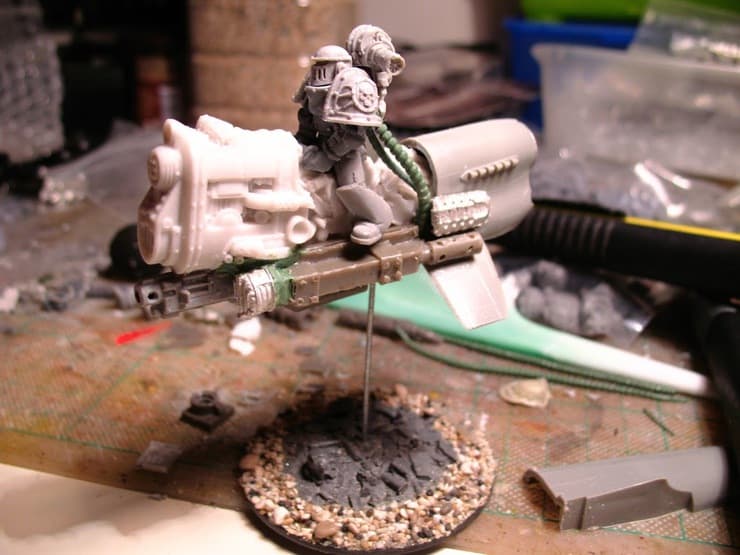 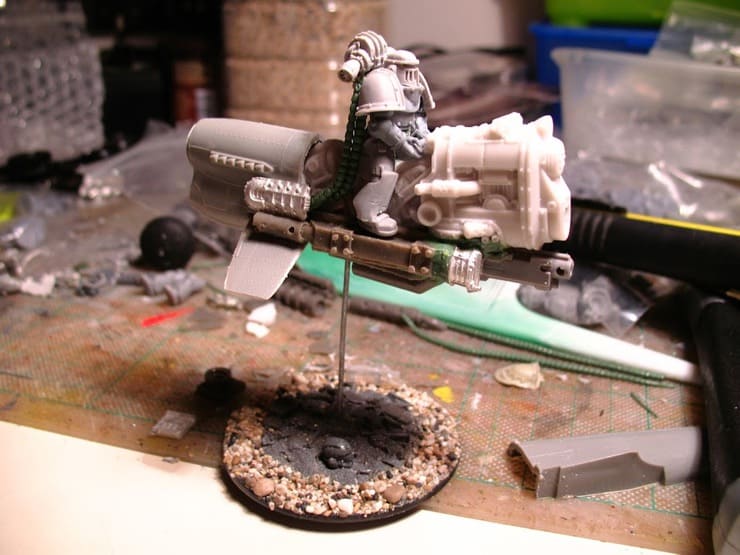 The rider was made using the same bits as with my other conversion. I also used my greenstuff tubing technique (see above) to make some power cords connected to the rider to add to the overal “deathguard-ey” feeling as with the other conversion.

The main body of the Dystopian bike was used as well as many of the bits that came with it. I also used many bits from a small company called Ramshackle Games, it has a great range of all sorts of vehicle bits that can be used in any kind of conversion and they served really great as exhaustion pipes here giving that streamline look I was searching for. To finish things up for the front of the vehicle, I added a Heavy Bolter underneath taken from a Land Speeder kit this time, sawing off the targeter to make it more fitting to be glued upside down. 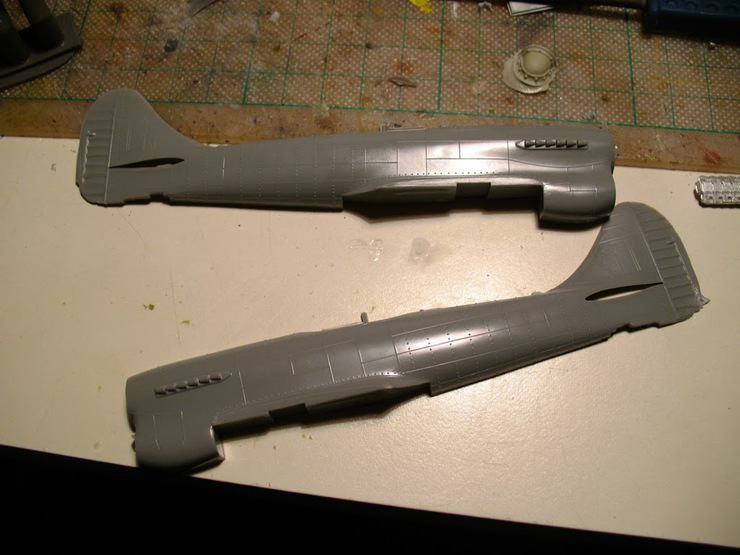 the only thing that was still bothering me was the rear of the bike. I was really stuck out of ideas, when suddenly my eye fell to an old 1:72 airplane kit I had lying around in my workshop (good thing to have stuff lying around, its a great inspiration!). I realized that I could use the front end of the hull as it had these nice little exhausts coming out as well as the tail wings. Some hacking, slashing and sanding minutes later and the result was a new tail for my jetbike and my flying Frankenstein was ready 😛

The bases are created using an old basing kit from Games Workshop. I found them perfect to create a flying base out of these, drilling a steel wire in the middle and finishing the whole thing with rubble.

2 finished, 2 more to go… stay tuned for more updates soon as I take a break from intense converting and take these to the painting booth! I would love to hear what you people think!

If you have time check my blog at http://homeofcadaver.blogspot.gr/ for pics of the rest of my Death Guard army so far.

Musical inspiration could only be that song! Till next time, enjoy!! 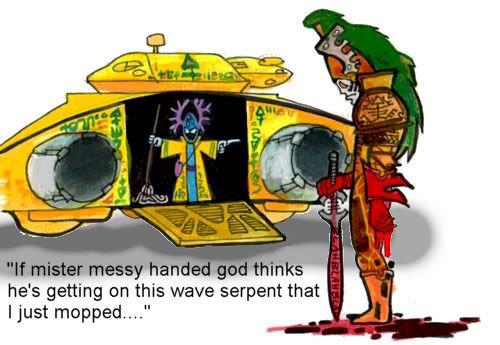 NEXT ARTICLE
The Future of Bits, at Spikey Bits. »
If you buy something from a link on our site, we may earn a commision. See our ethics statement.