Deep Thought- How GW Will Bring Back Specialist Games? 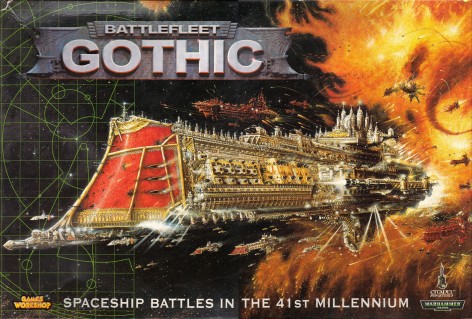 Hope is a dangerous thing. Come see some reasons on how and why Games Workshop is bringing back Specialist Games after sacking them over ten years ago!

First of all, if you haven’t heard the news, Games Workshop is planning the return of Specialist Games in the coming year(s). 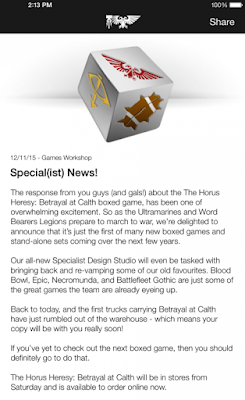 Now let that settle in. I have been very much opposed in the past to the dumping of specialist games. The are part of the Game Workshop BRAND. This is a very important thing they should cultivate. That is why from the beginning Lord of the Rings and The Hobbit were doomed to fail. (You really should read the two linked articles for the full effect of this post). They are not the brand. WARHAMMER is the brand. Heck, GW is even renaming all their stores WARHAMMER.

Don’t take it the wrong way. I am not saying the Hobbit or LotR was a bad game. But is want a GW game. At least not a core game. Beyond matching the movies up to a system of rules, there wasn’t much they could ever add to it. Definitely nothing in the way that BFG adds to 40k or Mordhiem did to Fantasy either.

Quickly I want to touch on Hobbit/LotR as a Specialist Game. I have seen this hinted at several places, particularly one GW store on Facebook, and I think it is great. If they keep a Master Rule Book/Source Book available in hard form, or all the books in digital, and move the models to their new specialist department, this can only be a positive. So long as revenue from it breaks even with costs OR it is shown to bring in customers that then expand to their other games beyond any lost profits on the Hobbit/LotR, then they should keep it. Why?

1- It gains loyalty from customers
2- It keeps a massive Fantasy IP within their control an not that of a competitor (Imagine if Fantasy Flight Games got a hold of it? They would definitely find a way to leverage it into something VERY appealing)
3- Offers collectible models to die hard tolkien fans (I still want a Balrog and Smaug)
4- It does what it always did, serve as a gateway to GW’s main product lines

Enough about the world of Tolkien though, that is not why you are here I am sure.

The biggest reason WHY they will do this though is simple. Falling market share. GW has been loosing ground FOR YEARS. They are still the biggest kid on the block, but they used to be the ONLY kid on the block. Now they want to ensure they remain viable in ALL FORMS.

I imagine there was a board meeting that went something like this:
“We are loosing market share every day to things like Drop Zone Commander, Dreadball, Infinity, Malifaux, and the like? Not to mention that blasted X-wing game! What do we do? How do we get those customers back?”
“Simple, we make a game for every part of the market they went to.”

Notice there is no direct competition to 40k (other than 30k, which they have, so who cares), but there is to ALL the Specialist Games. Just like (IMO) Age of Sigmar was an attempt to steal back the skirmish crowd from Warmachine (yes it was also to reinvigorate the fantasy crowd, but they failed in that by blowing up their own world), this is now an attempt to regain all their lost customers.

And then you bank on your robust lore and premium models to bring them back in droves. Lets face it, none of the competitors have nearly as expansive or as loved of a universe, and not many can compete in terms of model quality. 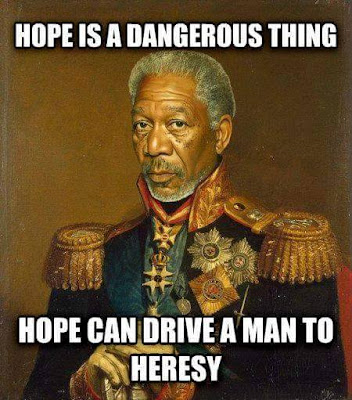 Now don’t go expecting any of this stuff any time soon. It will be at least 6 moths, but more than likely over a year, before we see our first Specialist Games products return. So why announce it now? Well for a few reason

1- Gain customer loyalty and support before the holiday season. Essentially wash away the bad taste in anyone’s mouth from the last year, particularly AoS, and make them feel good enough about the company to spend money on them.
2- Build A LOT OF HYPE.

That second point I am going to expand upon using Age of Sigmar and Betrayal at Calth as my examples.

I am not going to touch on the qualitative aspects of either games. To me it is for the player to decide with AoS, and it is far too soon with Betrayal at Calth. Yes, admittedly you can use your Calth minis for 40k or existing 30k and it is not replacing a game, but there is still a major comparison to draw, and that is pre-release Hype.

I feel like with Age of Sigmar, the end consumer was kept entirely in the dark as to what to expect until right before the release and that did alot of damage. People were hesitant to buy in and reactionary when they finally saw it right before hand. It was damning in a way.

Now look at Betrayal at Calth. For over a year we have heard talk of plastic horus heresy. MONTHS ago we saw leaked sprues. We confirmed about a month ago now (I think) that it is a hex based board game. And pre-orders have seemingly been AMAZING.

SO what does this have to do with the return of Specialist Games? Well by announcing it now they have not engendered a renewed faith in GW right before the largest shopping season, but they have created THE BUZZ. THOUSANDS of us around the globe are now excited! The prospect of these games returning has made many people happy or at least optimistic as to what the future may hold at GW. By controlling this themselves, they can direct us to be positive about the future of Specialist games, rather than scared of the darkness like it was with AoS.

Along with the official announcement, several GW stores also leaked that the Forge World design team was being incorporated into this new department. This bodes very well for a few reasons. First and foremost, I trust their design team in both the model department and rules department far more than the GW design team. Sure they have some busts too, but overall I think they make a better product. Alan Blight is the man.

Secondly, FW used to make Specialist Games products and likely still has the master moulds for what they used to sell. That means that as soon as something is released, say BFG, they can have their old product back up, in this case the entire Tau Commerce Protection Fleet.

But most importantly is the HOW part of this article and what Forgeworld brings to that. 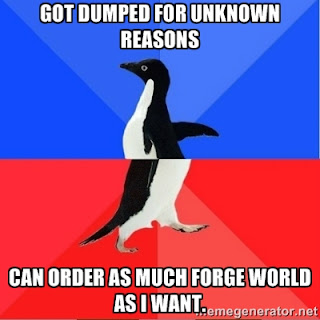 I think it is going to be all Resin. Well majority of the releases at least. Everyone keeps going “OMG PLASTIC” on all the different SG facebook boards, but I don’t think there will be enough demand for each game beyond a core box set in plastic. I think they will follow a Horus Heresy BaC model (Once again, learning from something that is already successful as above): a deal core set and then tons of optional and expandable units and upgrades from Forge World, just like Horus Heresy. Even if GW never makes another plastic HH model, the current combo will funnel profit to them.

By going mostly resin, they are able to cut costs AT EVERY LEVEL, which was one of the major problem with the old SG games. The cost of maintaining them was too great for the revenue they received, especially since most of the range was metal.

FW will be able to offer a premium product in small batches with Just-In-Time production/delivery methods and warehousing costs will be diminished. Additionally they will be able to use their generic packaging (which will save a lot long term). Finally making resin moulds costs less than plastics I believe. Heck for some games I wouldn’t be surprised if they didn’t even offer a core set, just all straight to resin (Mordheim perhaps, especially since all the AoS plastics can translate very well into it. Inquisitor for sure. Necromunda is another maybe. The biggest potential for plastics for Necro is actually new Terrain that they could market to us and 40k players. UNDERHIVE terrain sets, and they could release it with a new version of cityfight for 40k or something).

By cutting costs, they make the games profitable to keep. Lets face it, blood bowl is great, but it isn’t 40k. Same with BFG, EPIC, and Necromunda. They never drew the crowds. So if we want them to stick around, we have to accept that they will use production methods that better suit a smaller demand.

The interesting thing will be to see what effect that all of this ends up having on the current Ebay market and, even more so IMO, the current afterparty and 3d printing markets… 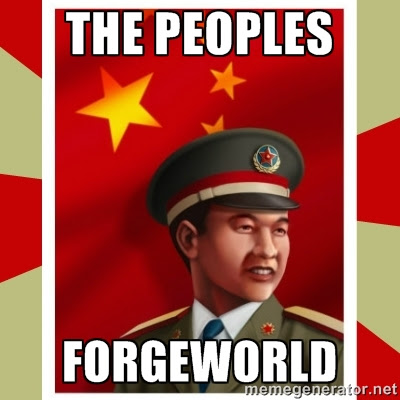 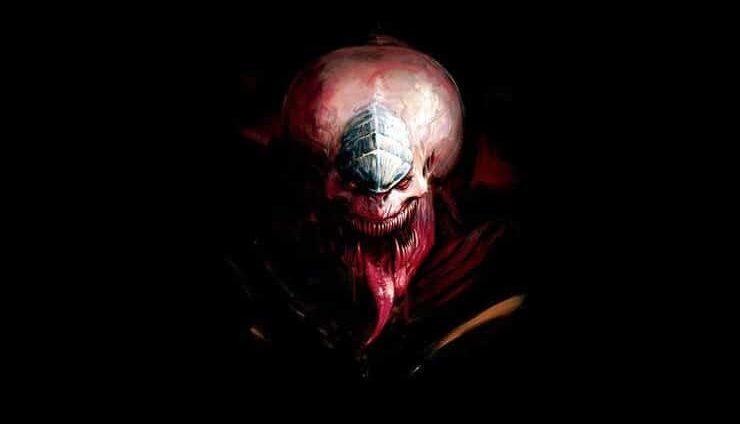 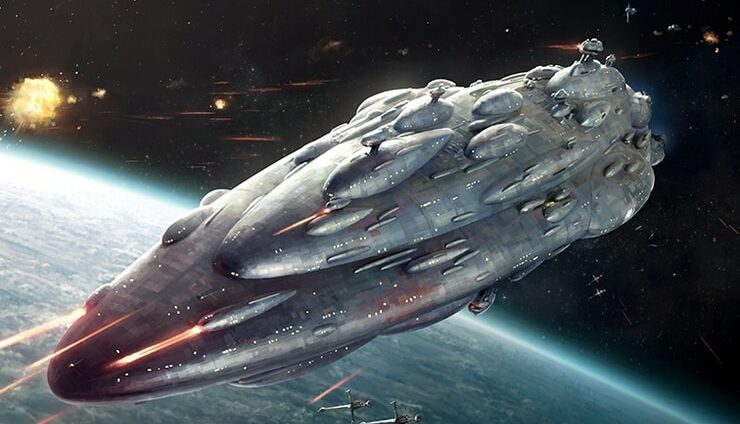 NEXT ARTICLE
Unboxing Wave II – Star Wars Armada Ships ARRIVE! »
If you buy something from a link on our site, we may earn a commision. See our ethics statement.