Lore – Just How Big is The Spartan Assault Tank?

The Spartan Assault Tank is the big daddy to the current Astartes Land Raider, but where did it come from? Get all the details in today’s lore post!

The Spartan Assault Tank was a large heavy tank designed during the Great Crusade and Horus Heresy to carry a full squad of Terminator-armored Marines. Originally designed to get through the ‘Ring of Death’ surrounding the city of Aries Primus on Mars, the standard Land Raider at the time could not transport Terminators. The design is based off the famous Land Raider.

The original Spartan had the standard Land Raider armament of the day, two twin-linked lascannons (heavy bolters were not standard then) but also mounted either a heavy bolter or heavy flamer on a turret on top. It was widely spread after the Heresy, but disappeared when the standard Land Raider was re-designed to carry Terminators. The Spartan design used today features the twin hull-mounted heavy bolters seen on contemporary Land Raider designs, as well as a pair of sponsons fitted with a quad-lascannon battery each. It is able to transport 25 Space Marines in power armour and has the largest transport capacity of any dedicated transport vehicle used in the Imperium save the Gorgon. Additionally, it is considerably faster than other Land Raider variants despite its increased size, due to its reactor-driven motive drive systems.

Many Space Marine Chapters still maintain these huge war machines as part of their arsenals and deploy them into warzones where even the mighty Land Raider would be torn asunder. Chaos Space Marine warbands still operate Spartans that date back to the Great Crusade, with most belonging to the original Traitor Legions. 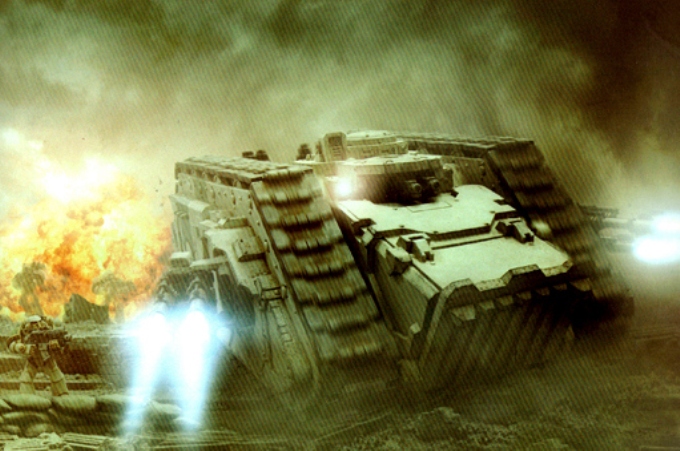 Would you like a BIGGER Tank? Checkout the Mastodon!

NEXT ARTICLE
The Titan of Change? – Tzeentchian Conversion Corner »
If you buy something from a link on our site, we may earn a commision. See our ethics statement.