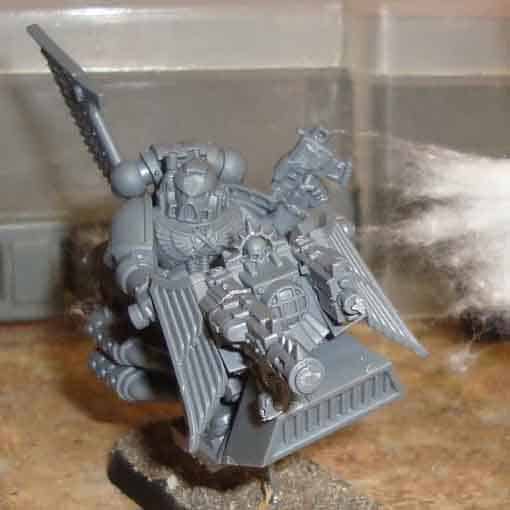 Hello everyone, my name is Jack, and I’ve been an alcoholic- Er I mean hobbyist, for the better part of eleven or twelve years now. I’m not even sure anymore.

Like you, I’ve got a serious problem with plastic toy soldiers. I need more of them. Especially because I’m a chaos player and they’re suddenly 13 points per dude. My painting table right now looks like a military parade ground, 50 marines are standing around waiting for their assignments.

But hey, that’s a story for another day. Today I want to talk to you about bikes. Why? Well, because they’re pretty good. If you’re a space marine, you’re sitting on a relentless T5 twin linked boltgun. Also, you get to go fast. It’s not a bad deal. But there’s something that’s made bikes even BETTER lately, better than the Toughness changes in sixth edition, and that’s Dark Vengeance.

Before DV came out, I would have said that I liked bikes, but they wouldn’t have figured into my budget. One of the nice things about playing SPESS MUHROONS is that all your little plastic men are dress up dolls- Once you pile up enough parts, you’ve got pretty much anything. The marine stays the same, the trip into the bits box to find him toys… Jump packs, melta guns, power weapons, that’s what defines him.

You have a pretty easy time getting whatever you need for your dudes once you’ve been at this thing long enough to develop a good stockpile. Bikes on the other hand, didn’t fall into that category- A bike wasn’t a marine. Technically, it was a motorcycle. Its an individual part that needs a specific set of marine legs to ride it, it doesn’t just flop into the bits box like your other toys. It requires planning. Commitment. List writing.

SCARY THINGS. A bike lacks the utility of basic marine models- A marine can be any kind of marine, a rhino can be any kind rhino derivative. But a bike? A bike is only ever a bike. Emperor help those poor marine players, they have to make decisions! 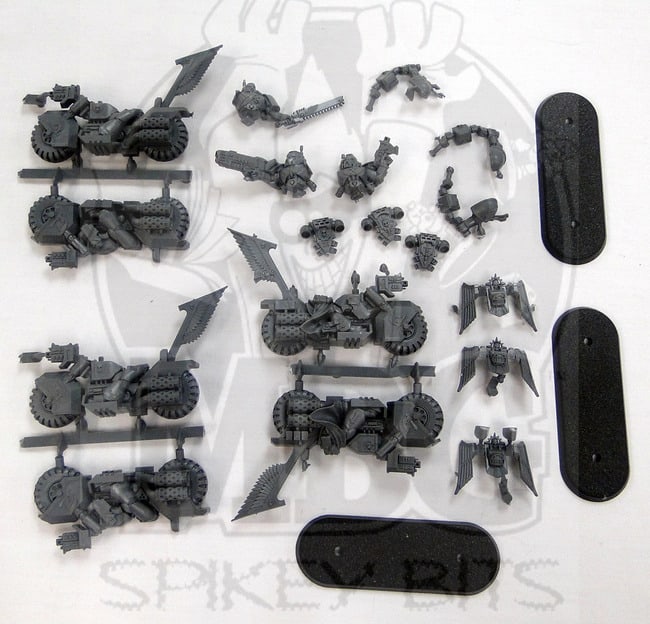 Dark Vengeance gave us cheap, throwaway bikes. Looking around the internet, and here on spikey bits, you can pick up ravenwing bikes for fifteen bucks, and brother- That ain’t bad at all.

Granted, if you’re not a DUHRK ANGLES player, you’re going to do some clipping and filing, but 15 bucks for what is normally a 41 dollar box at the GW? Cry me a river.

So lets talk about dressing those babies up a little, right?

Now, if you’re one of the big first founding legions (or chapters, for you corpse worshiping sissies) you probably have a soft spot in your little black heart for jetbikes, really cool relics from the Great Crusade, from the before time, back when we used to have nice things.

Even if you don’t like, can’t afford, or just don’t want those sweet new forgeworld jetbikes, having converted pre-heresy jetbikes for your grandpa’s great crusade army are just cool to have, even if you don’t play HH games and just use them as stand-ins for normal muhreen bikes.

With a little chopping and clipping, (its even easier if you have actual space marine bike kits that don’t have the tires molded to the fenders) you can make little Judge Dredd hoverbikes that are pretty neat. 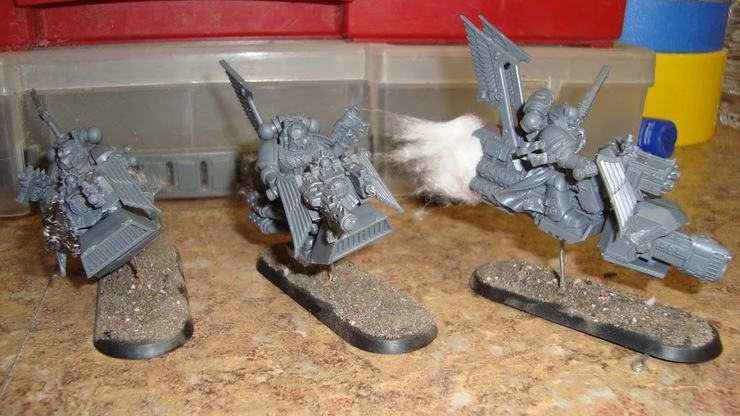 Here’s the boys in grey from DV on my desk, before paint. I’d post them after paint, but they’re still pretty much just purple and nothing else right now, so there’s not much of a comparison. Its also worth noting that I’m building Heresy-Scouring era Emp’s Children, so a lot of the Ravenwing bird feather motif is still appropriate for my legion. I just clipped off the swords and left the winged claws.

Building the bikes is really more clipping and chopping than anything. Its not by any means a real deep hobby job. If you’ve read a lot of Pre-Heresy army blogs before, you’re probably aware that one of the favorites before FW jetbikes was to just de-dark angel the master of the ravenwing… That’s awesome, but its a huge commitment.

I’d also like to point out that the MotR is in finecast now, and that’s a whole other bag of wet angry cats to deal with. This is sort of a poor, lazy, less dedicated man’s alternative. (Whale biologist- calls em like I sees em)

I wanted to put some kind of gigantic afterburner on the back of the bike to propel it in place of the rear wheel, but going through the garage, didn’t get anything interesting. I put cottonballs in the rear wheel well to see what it’d look like, and I’m pretty satisfied with just that.

The front intake manifold is the goofy blower from the top of a stormraven gunship. If you’re a BLUD ANGLE/GRAY KNITE player, you’ve probably got those hanging around. (because a stormraven looks better with a flat roof and a razorback turret. Just my opinion.) If not, I think somewhere on the internet might have them. (derp, like where?)

One of the cool things about them is that they’re beveled at an angle, and they fit perfectly onto the bottom of the bike frame, with no need for cutting or rebuilding. You chop the forks out from under the front of the bike, put that muscle car hood scoop on it, and you’re good to go.

For those of you who need this kind of thing, Here’s a profoundly poorly rendered diagram in MSpaint.

You can see that I have devoted a great deal of time and attention to detail to this project. The expertly rendered turbo boosting flames will surely make me the envy of my peers in the art community.

How does the rider actually steer it? Why do you ask so many questions? That’s tech-heresy, son.

For the boss biker, I left the front fender on to use as a gun mount. This way he can do double-duty as a forgeworld bike, (they have big gun options) an attack bike, or the gun mount can be used to represent a combi-weapon that the rider is carrying. In any case, its just an excuse to make him look cool, and differentiate the hero from the goons. Since his bike actually still looks like a bike because of the front fender, I put some more leftover stormraven parts on the bottom for anti-gravity propulsion to make it look like it actually floats. 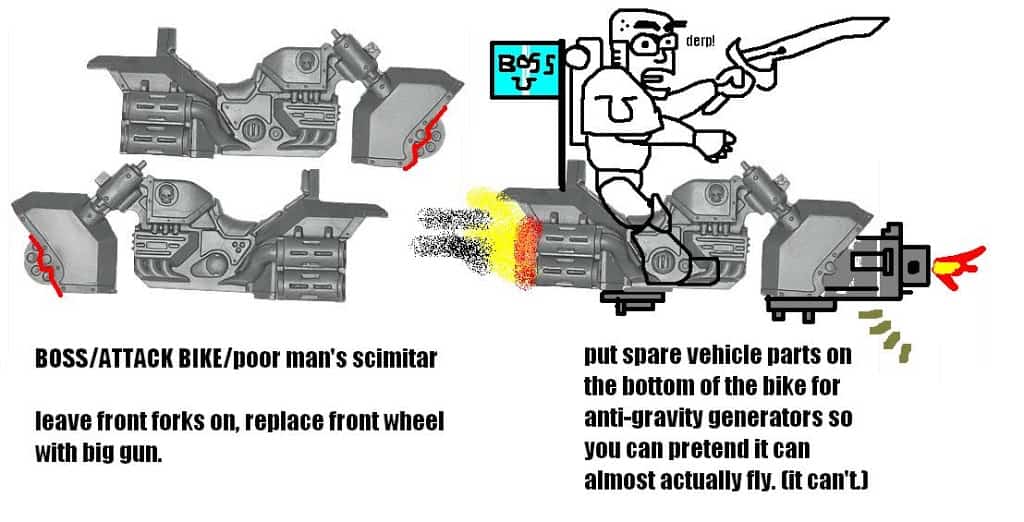 Behold, yet another artistically brilliant render, this time featuring Captain Cato Sicarius, from his little known and brief career as a bike captain. Man, how heroic does that guy look? Isn’t his heavy bolter cool?

Yes, I’m ashamed of myself. Also I’m pretty sure Cato played chicken with a battlewagon and had to lay the bike down. That’s why he walks everywhere now.

Tune in next week and I’ll show you how to make a mountain of cocaine for your Doomrider conversion to ride down. (I will not actually be doing that. I can’t afford cocaine, its a cost-prohibitive basing material.)

Um I’m at a loss for words…LOL. Just kidding, great idea, and I think these look better than the overprice Forge World ones (which also look like something very non 40k entirely as well)! -MBG 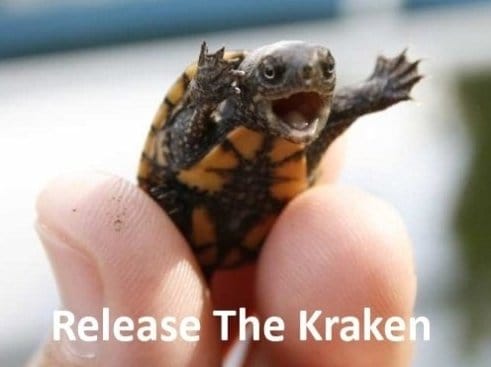 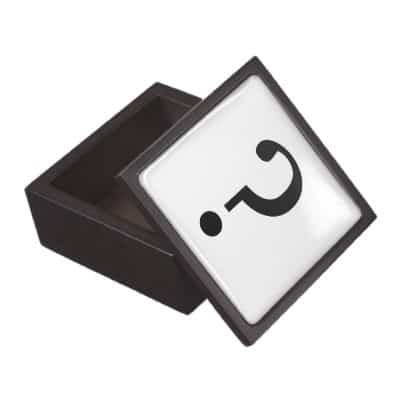 NEXT ARTICLE
On Sale Now (While They Last)! Gamer Mystery Box »
If you buy something from a link on our site, we may earn a commision. See our ethics statement.