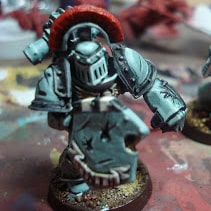 Hey guys, Rage of Khorne here from The Order of Chaos gaming club, looking to walk you through one of my first Sons of Horus models for my upcoming pre-heresy campaign (more on that in future articles).

The tools I used were fairly simple and included:
-Files
-Plastic Glue
-Super Glue
-Green Putty
-Assorted Bitz
-Sculpting Tools
-Brushes
–Paints (Mephiston Red, Orkhide Shade, Tallarn Flesh, Chainmail, Mithril Silver, White Scar, Rakarth Flesh, Yriel Yellow, Seraphim Sepia, Brown Ink, Abbadon Black, Mechanicum Standard Grey, Fortress Grey).
I started off by collecting the bits of armour and weapons I wanted for the over all affect of pre heresy armour so the pieces I used were as follows:
-Sanguinary Guard Jump Pack (akin to the Mark IV patternpacks)
–Assault Marine Arms and Legs
-Mark V Chest Piece from the Tactical Marine Boxed Set
-Blood Angels Augmented Eye Head from the Death Company Boxed Set
-One FW Iron Armour Shoulder Pad
-Tactical Marine Shoulder Pad
I assembled the legs and torso first so I would have something to add on to while I worked. This made handling the individual pieces much easier and avoided ruining the small green putty work I did. 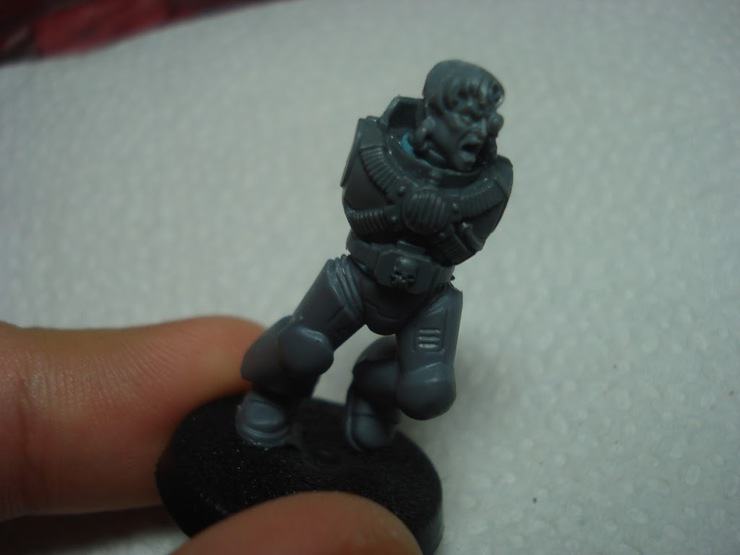 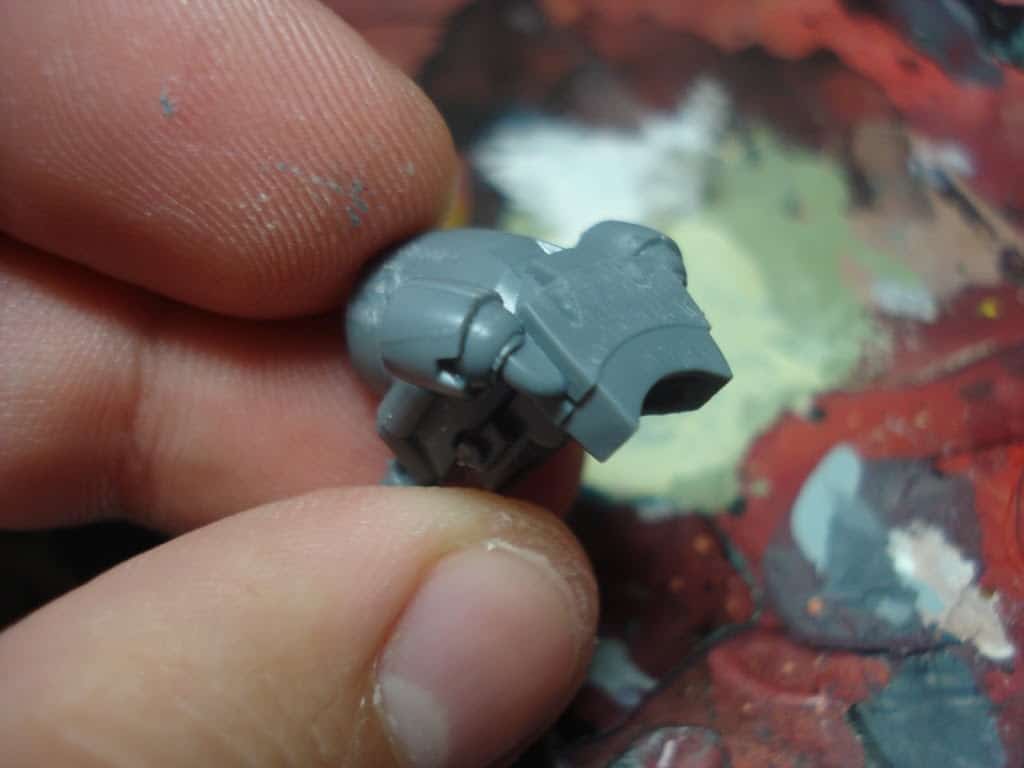 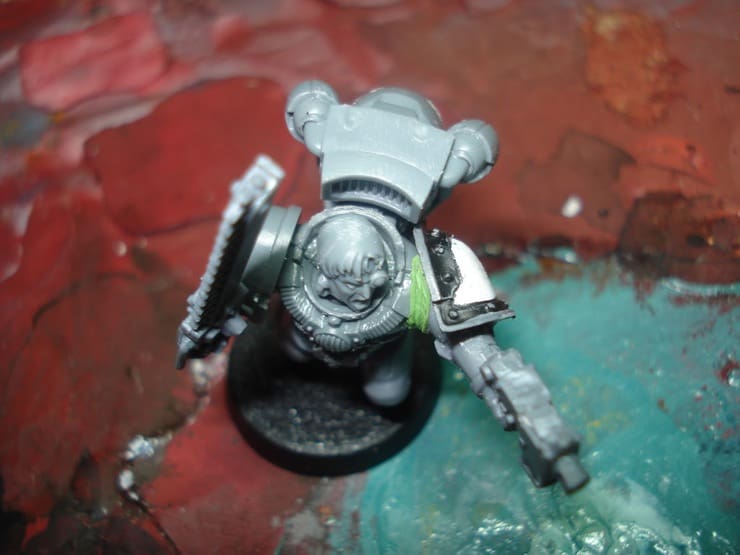 I blue tacked the head, arms, and backpack before deciding their final position so I could figure out the most dynamic pose while not having to go back and pull parts off the model. I glued everything together and sculpted some ribbing in the arm gap to try and hide the slight angle change I made.
I then did some scenic basing and sprayed the model white. The first step in basing the model was giving two spray coats with my air brush to get a nice smooth finish to the armour. The first coat was a 1:1:1 mix of Water, Orkhide Shade and White Scar. 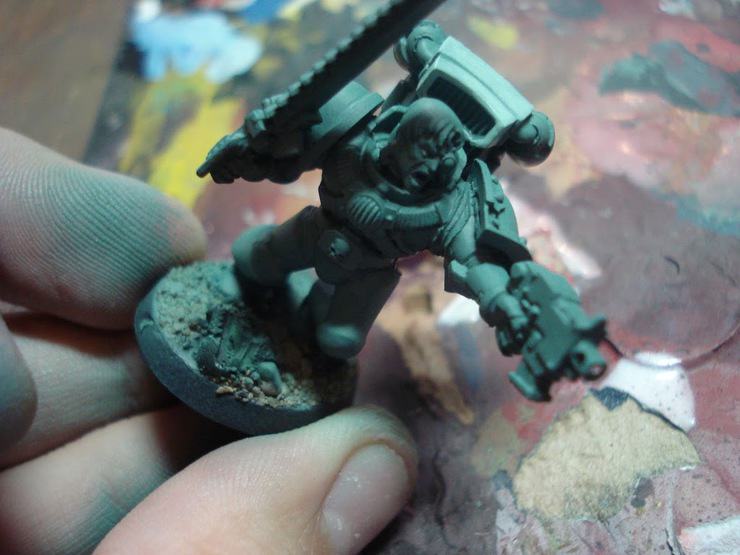 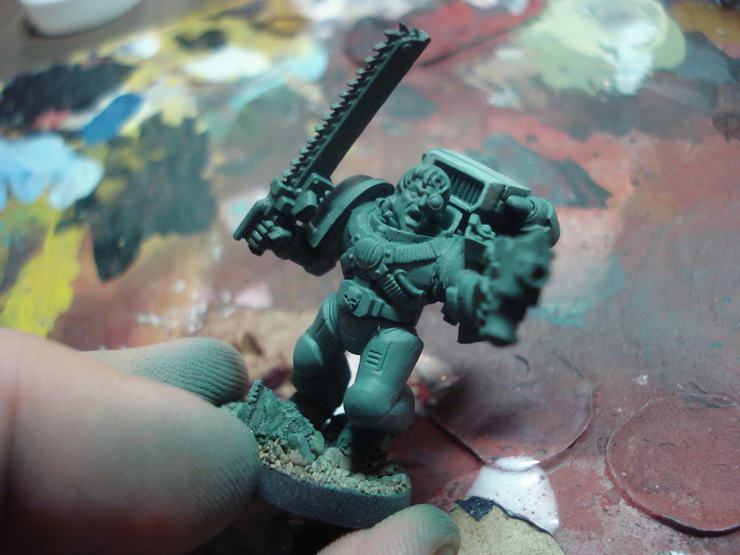 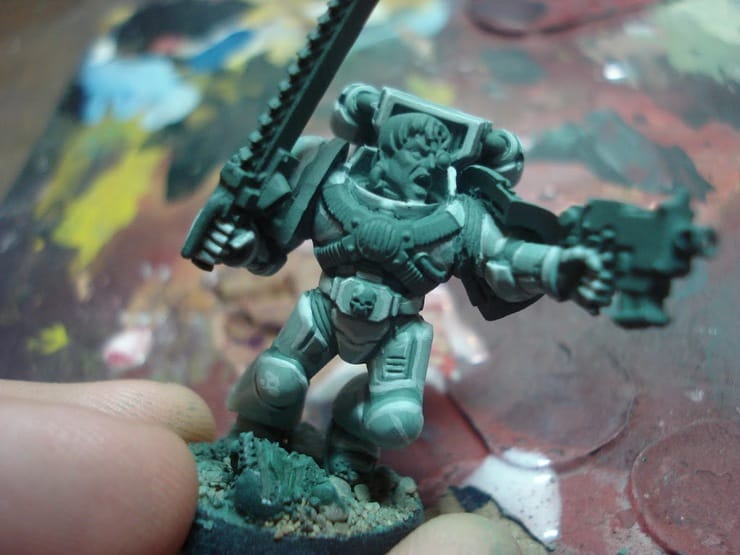 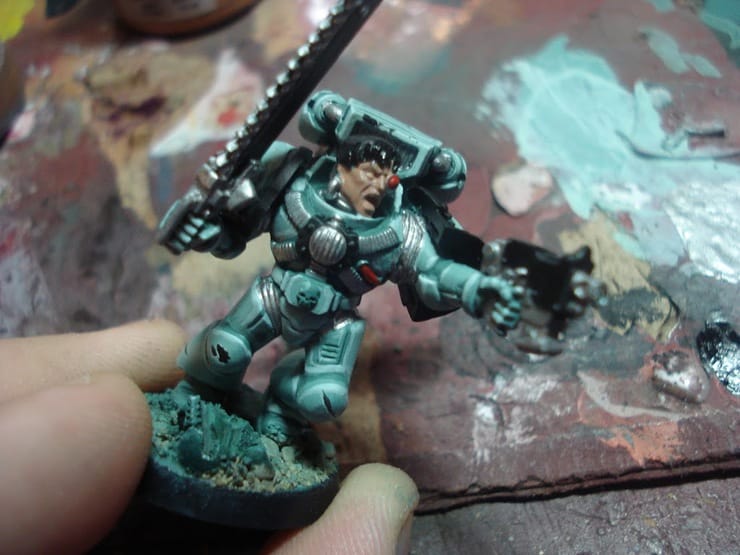 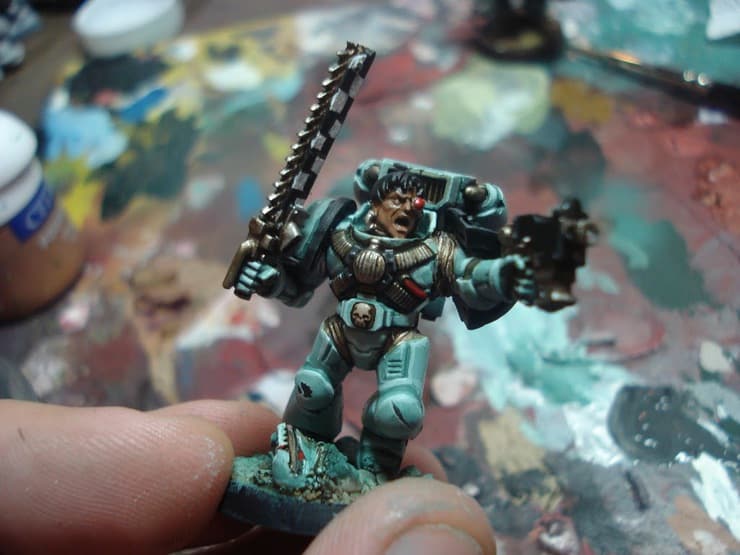 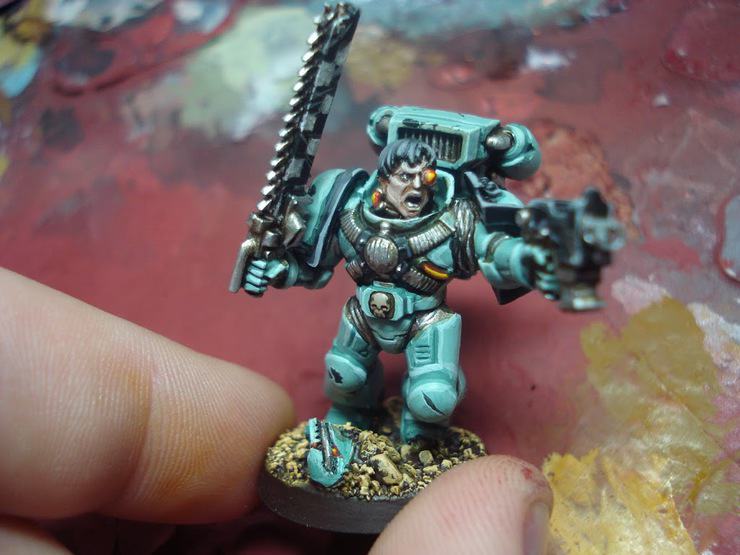 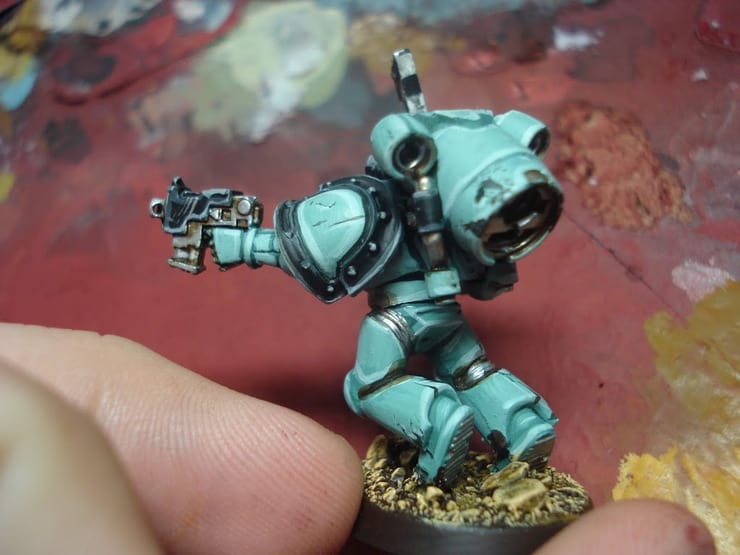 The metals were then highlighted with Mithril silver and some Mithril Silver was criss crossed over the checkers and the bolt pistol to show wear and tear on the most actionable parts of war gear. I finished up by highlighting the skin with successful highlights of Tallarn Flesh mixed with white in increasing amounts until I got a gaunt, light coloured skin tone.

The cords were highlighted with a 1:1 of Mephiston Red and Yriel Yellow and then again with pure Yriel Yellow. The chipping and cuts on the armour were finished off with light dabs of Abbadon Black applied to the upper portion of the light dabs of paint added earlier. This gives the visual effect of a hole or crater and the light reflecting off its edge. The basing was finished and I was ready to start building the other members of this assault squad. 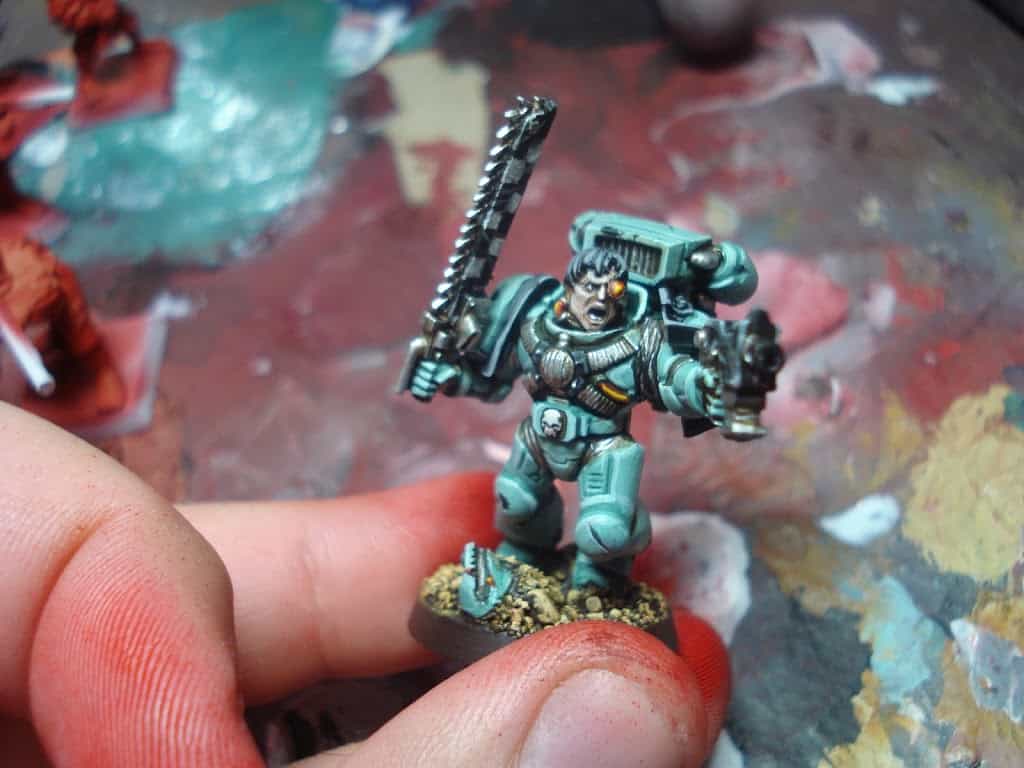 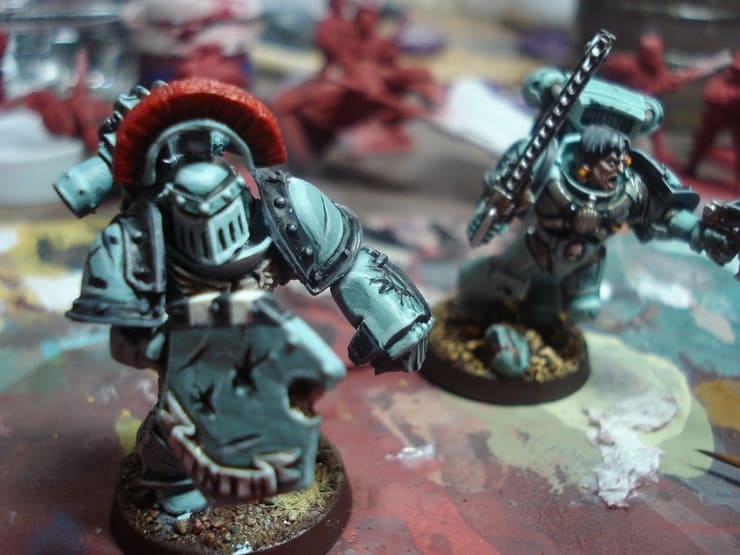 Depending on whether you are a loyalist or traitor, the colours of this assault marine could vary significantly, for example, if you were fielding a first company army with Abbadon, this unit could be painted in blacks to represent Catillan Reaver squad. 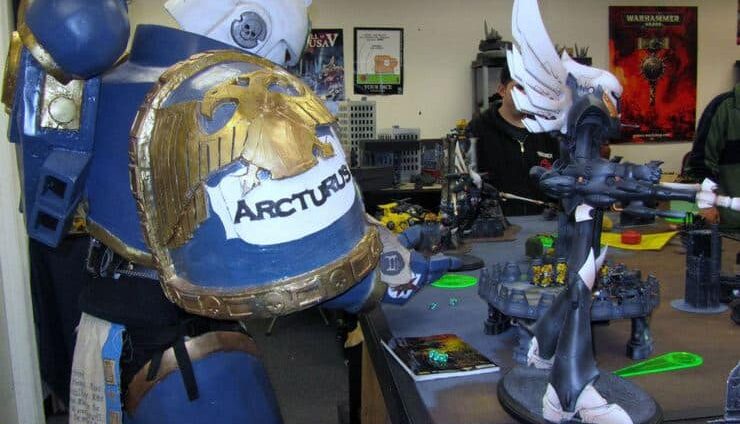 PREV ARTICLE
« So Why is that Space Marine Playing Eldar? 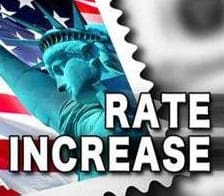 NEXT ARTICLE
The Sky is Falling? USPS Raises Shipping Up 50%?!! »
If you buy something from a link on our site, we may earn a commision. See our ethics statement.