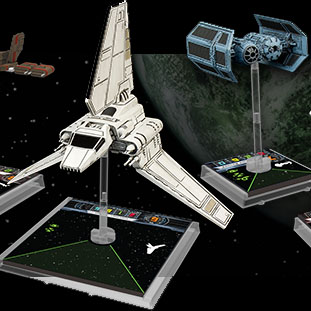 The long rumored Tie Bomber and B-wing were included as well as the Lambda Class shuttle and the Moldy Crow from the Dark Empire video game expanded universe.

So with the inclusion of the ladder, that leaves the door wide open for FFG to use any or all of the expanded universe of ship to add to the highly popular game series.

Look for these ship to be on shelves this fall!   Welcome to X-Wing, the #2 selling Tabletop Wargame of 2013.  Be sure to read our Star Wars Tactics Articles and lock S-Foils in attack position! -MBG

Checkout all the info below courtesy of Tabletop Fix!

Fantasy Flight Games announced the HWK-290, Lambda-class Shuttle, B-Wing, and TIE Bomber to be scheduled for release in the third quarter of 2013:

NEXT ARTICLE
FTN Podcast Ep 9: New 40k Meta? Tau & Daemon Lists »
If you buy something from a link on our site, we may earn a commision. See our ethics statement.