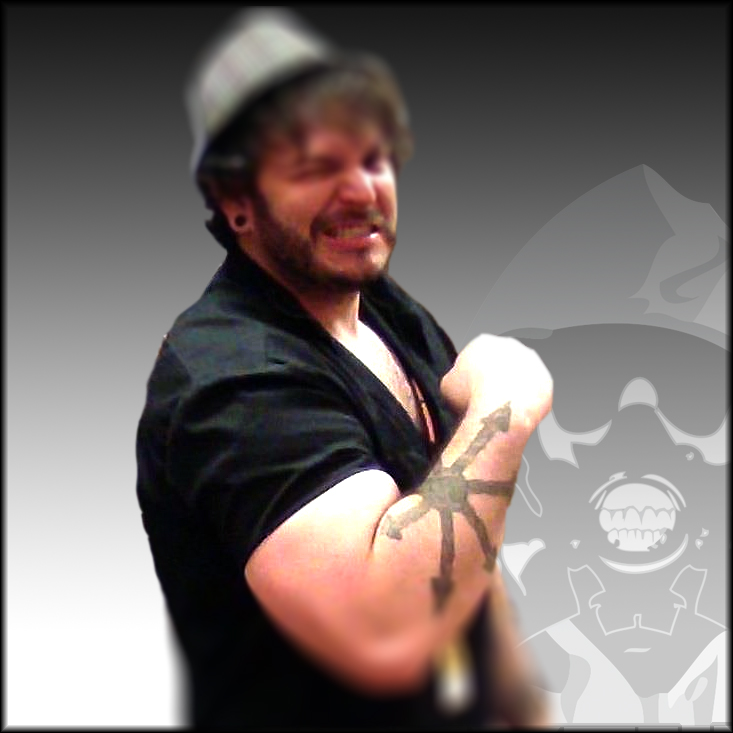 Yo, Kenny from Next Level Painting here with my series of Battle Reports from the NOVA open.

You guys voted from me to play Blood Angels at that event over on the Forge the Narrative website, so here it is! 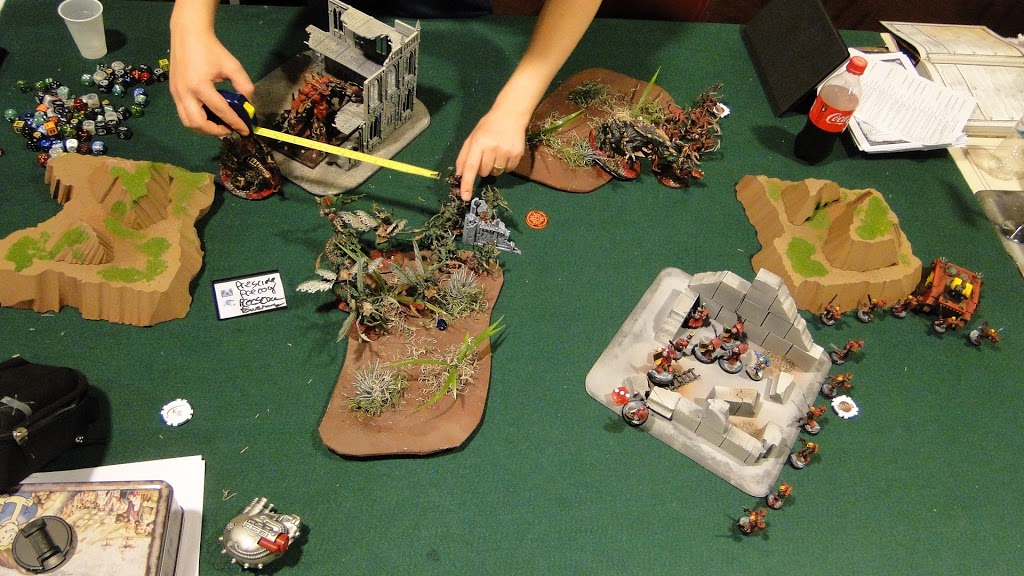 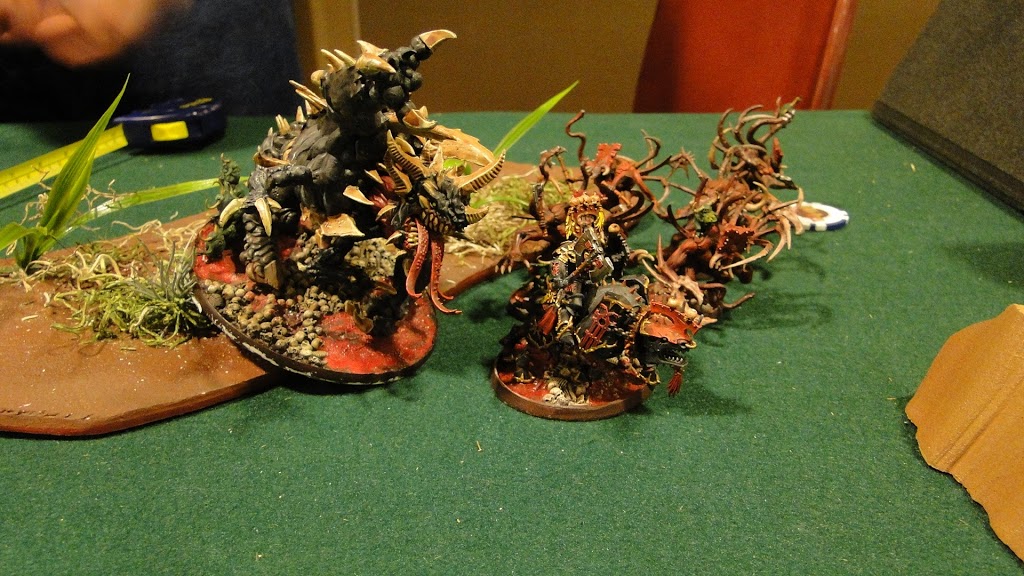 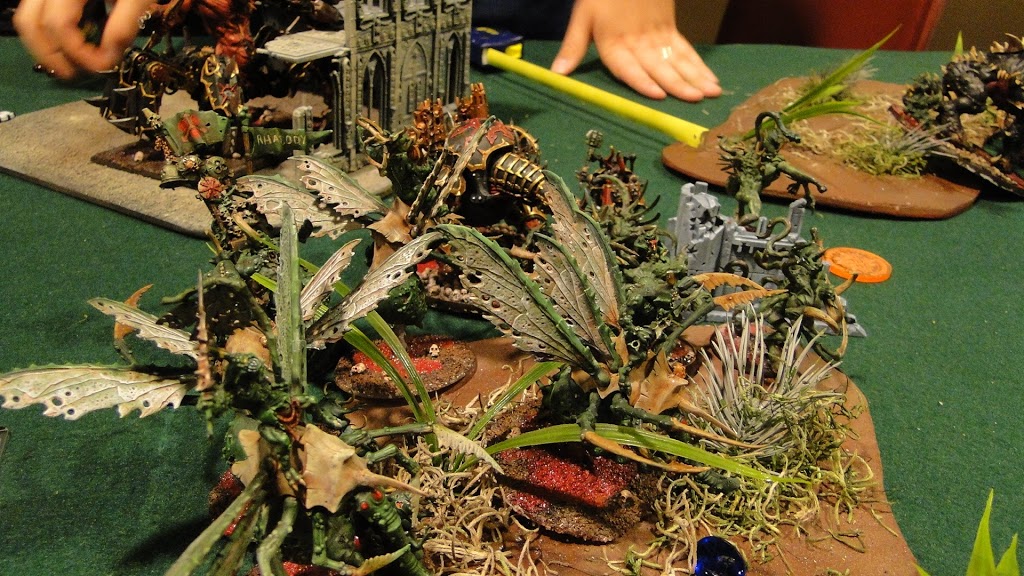 I elect to go second, deploying my terminators, mephiston,corbulo,sanguinary priest and librarian.

Along with two halves of separate assault squads via “combat squads” Leaving the flamers in reserves embarked in storm ravens along with a furioso. The razorback also deploys. Its’ night fight and vanguard strike! These images are of my opponents first turn, he is rushing his units up into my deployment zone. 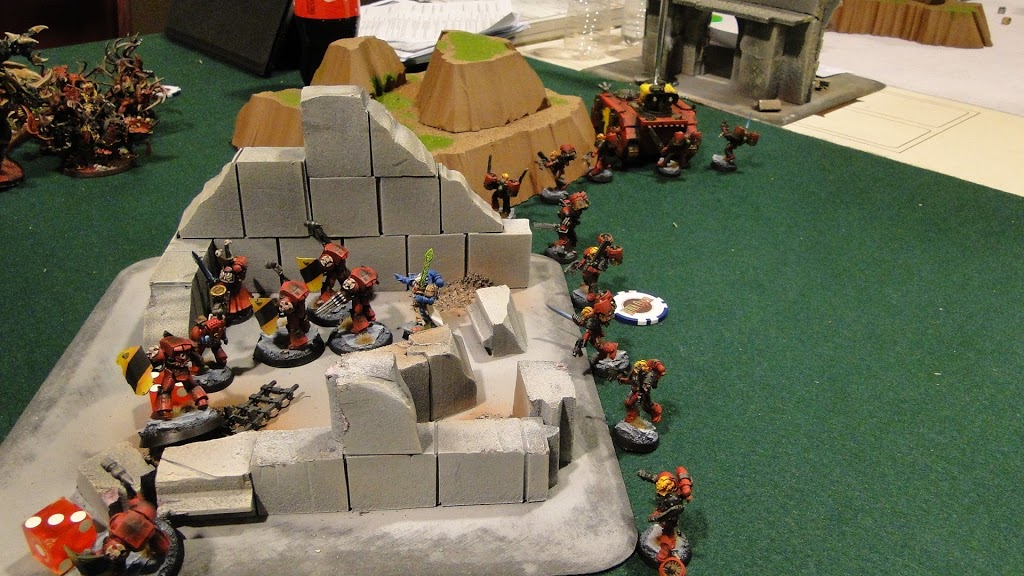 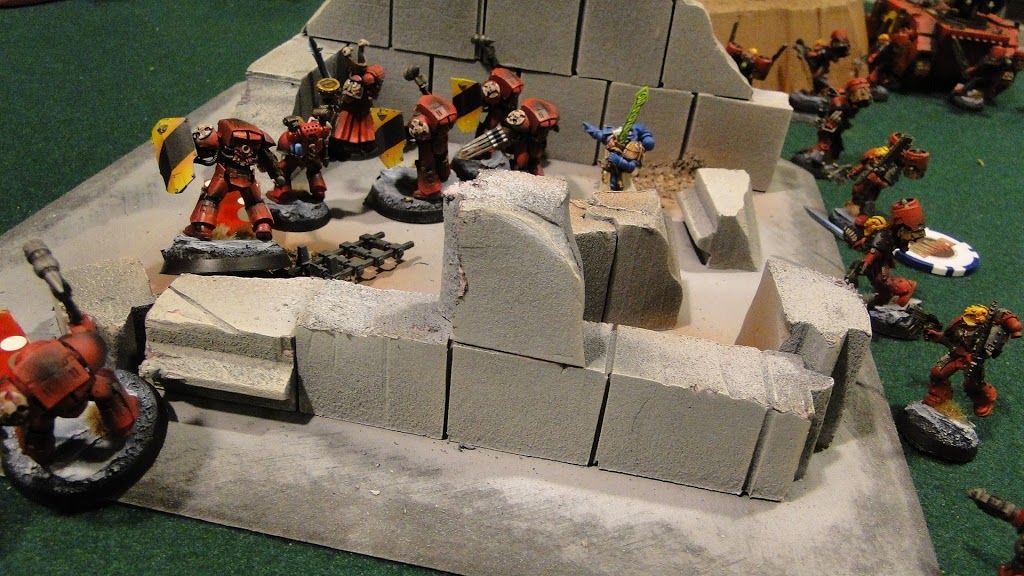 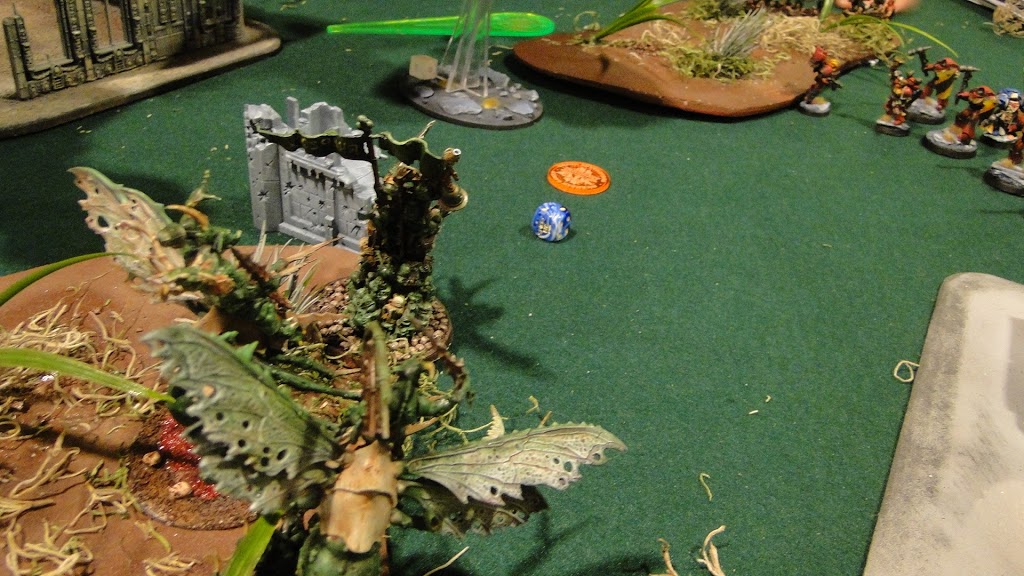 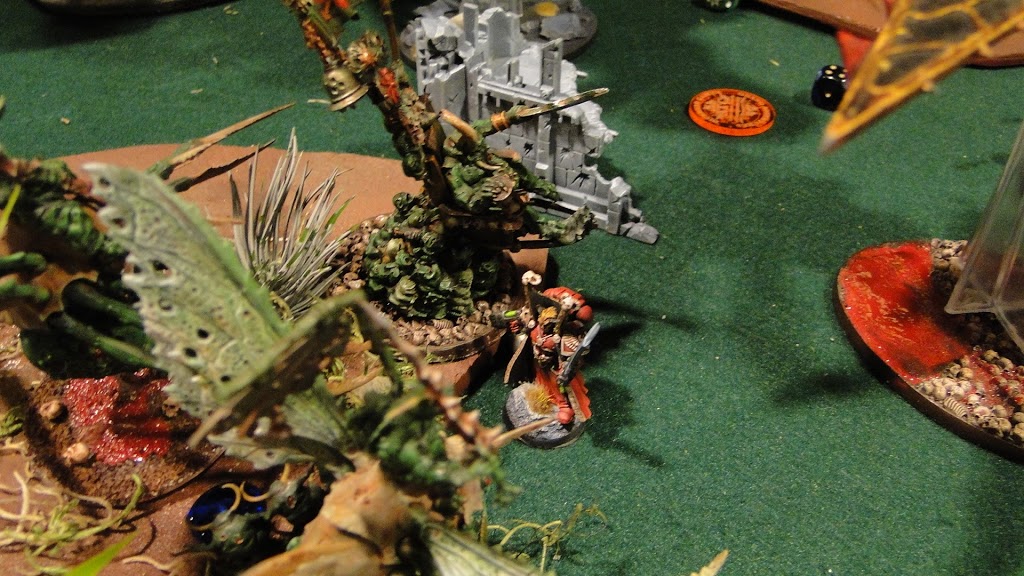 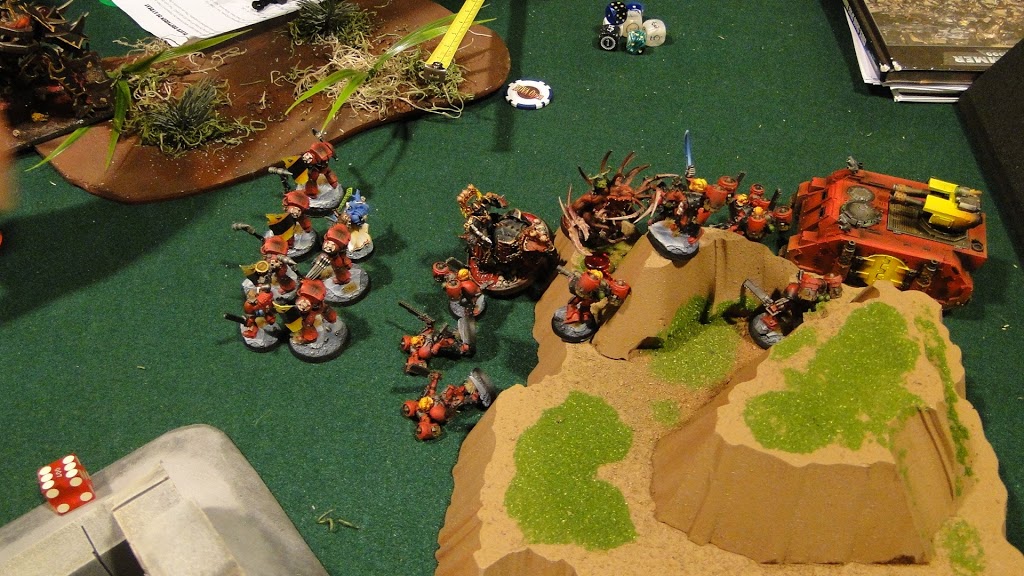 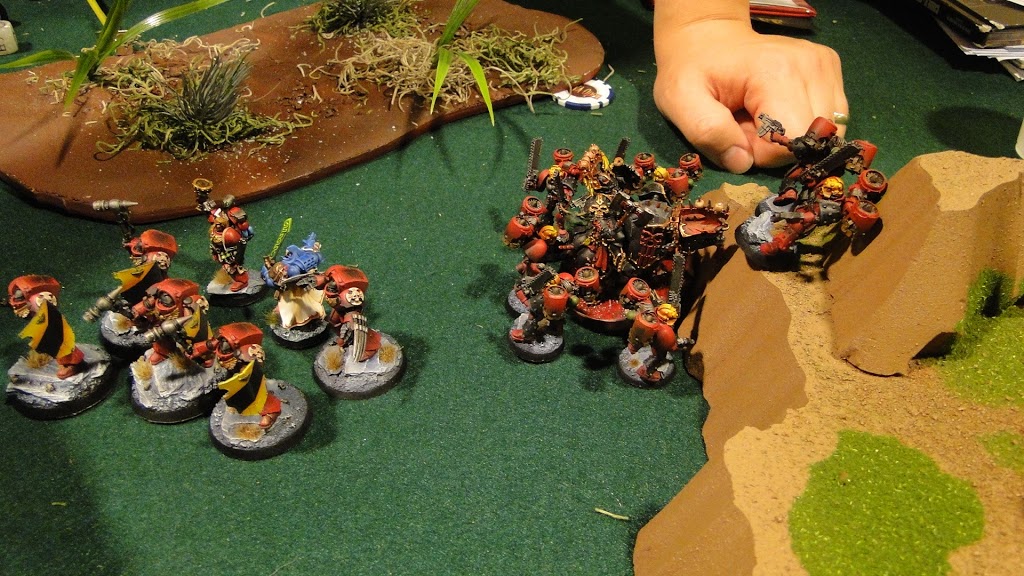 Its time to react to my opponents aggressive play. Mephiston casts “precognition” and runs forward into the nurgle spawn with the black mace biker lord.

While my terminators advance into a central position in order to threaten his retaliation to my retaliation. The assault marines all take positions to assault the khorne spawn with the axe of fury lord.

The sergeant challenges the lord and dies while his comrades crush the spawn before they can swing. Meanwhile Mephiston murders the black mace lord. 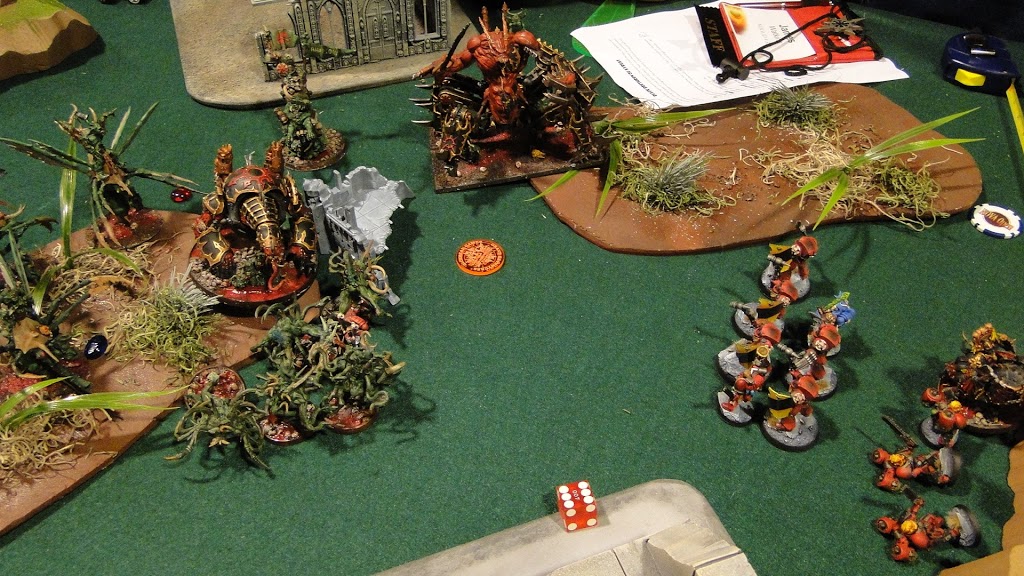 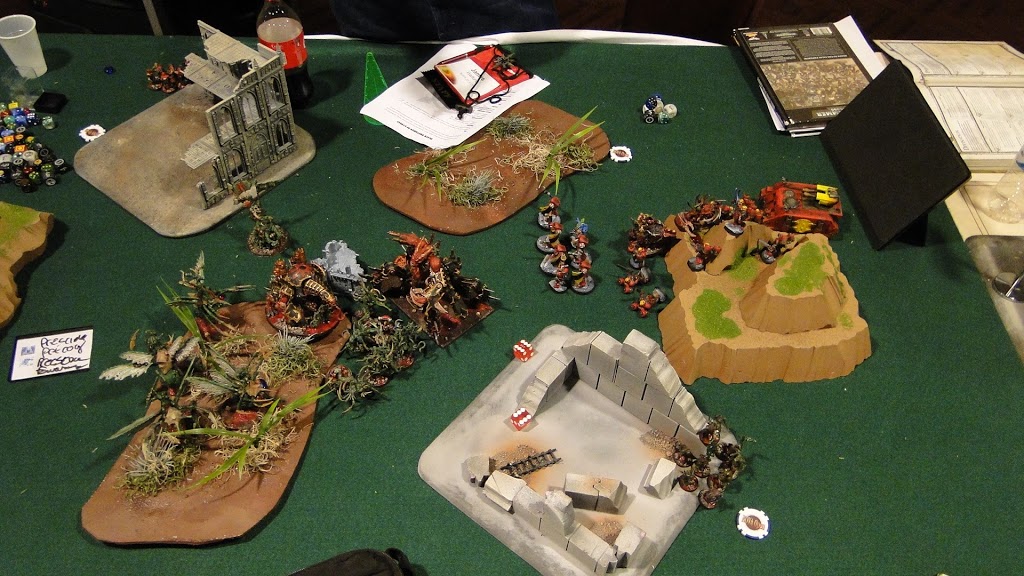 My opponent fails to bring his hell drake on but he does get his plague bearers on my objective in the back field. He also reinforces the Mephiston combat with a mauler fiend and soul grinder.

Mephiston goes down but not before brutalizing the plague drones with his force weapon.
Meanwhile my two assault squads who are locked in combat with the juggernaut lord issue a challenge with the other sergeant. 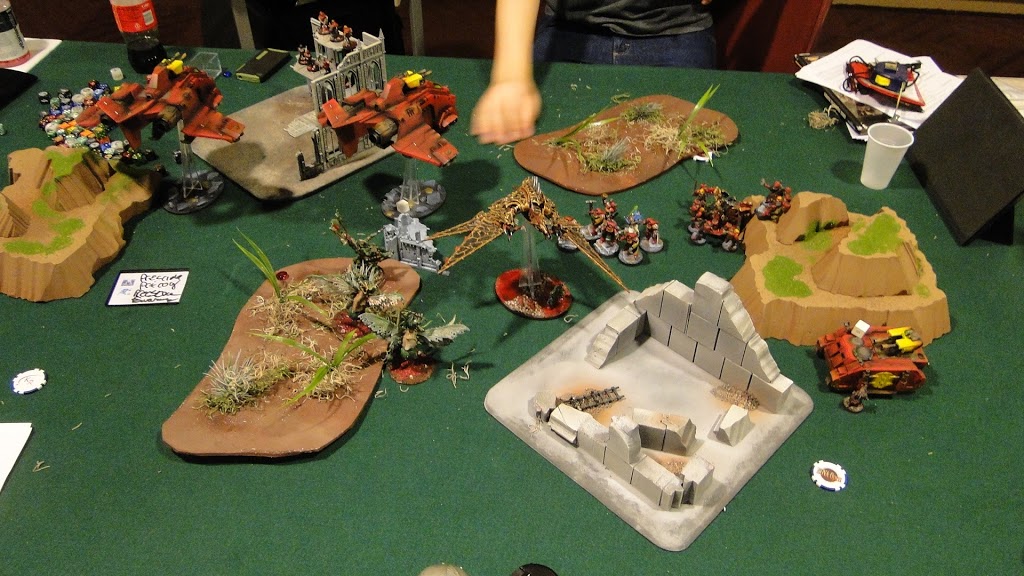 A quick turn two for me seeing the death of a soul grinder via terminator love. As well as the mauler fiends death at the hands of a storm raven. While my sanguinary priest challenges the juggernaut lord for a 3rd stone wall. My razor back Murders a plague bearer squad.
My opponent brings the drake on top of turn 3. 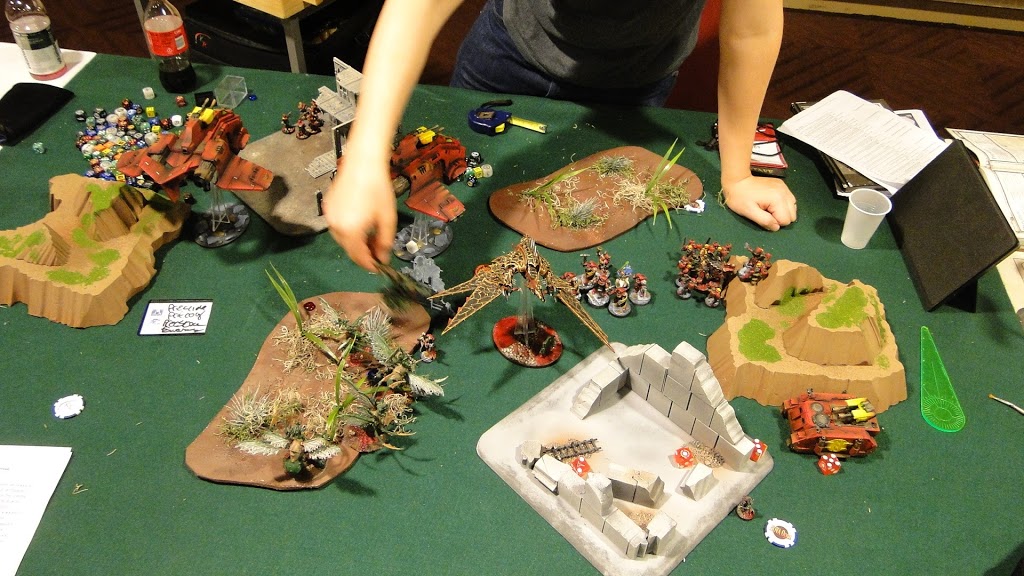 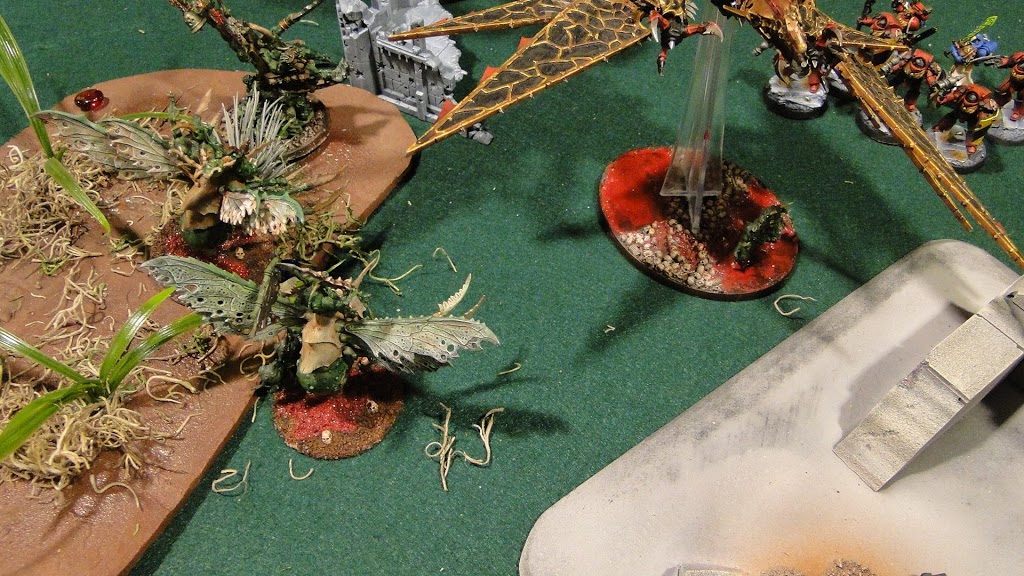 The drake has no notable targets this turn and tries to hurt the terminators to no avail. 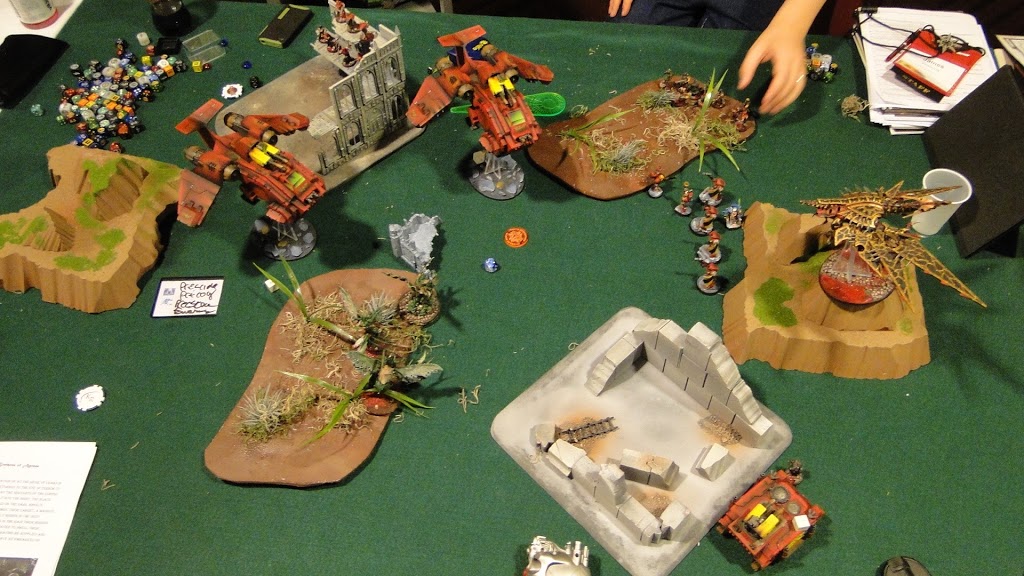 I push my terminators into the juggernaut lord and smash him while trying to hold the drones in place with my dreadnaught. The storm ravens begin to harass the drake while my troops get into position on top of objectives. 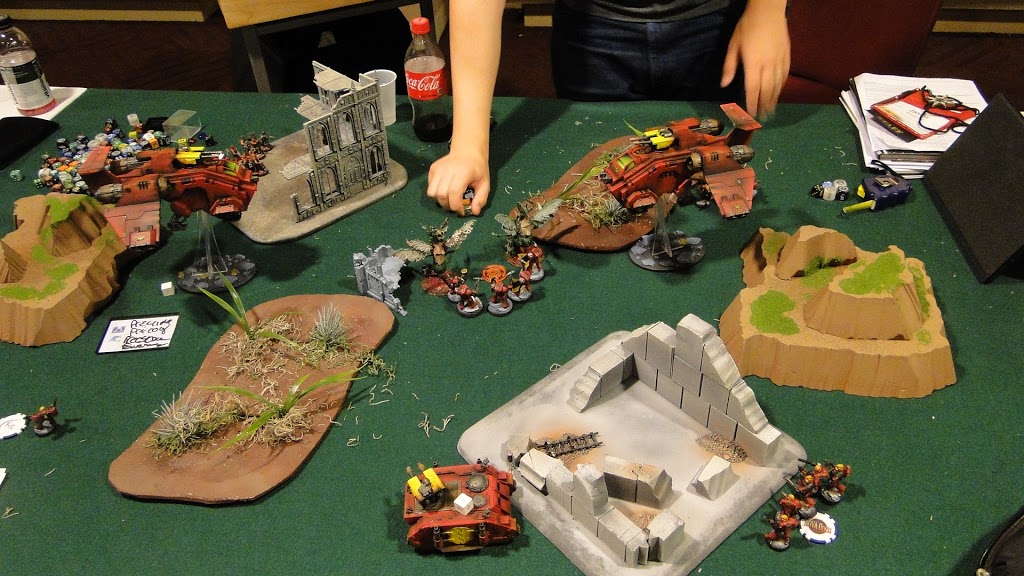 I detach the librarian from the terminators and join up with a couple survivors from the juggernaut lord and push onto some cultists holding an objective. on his side. While the units on the ravens jump onto the other objective in his deployment zone, flaming all the poor cultists to death. 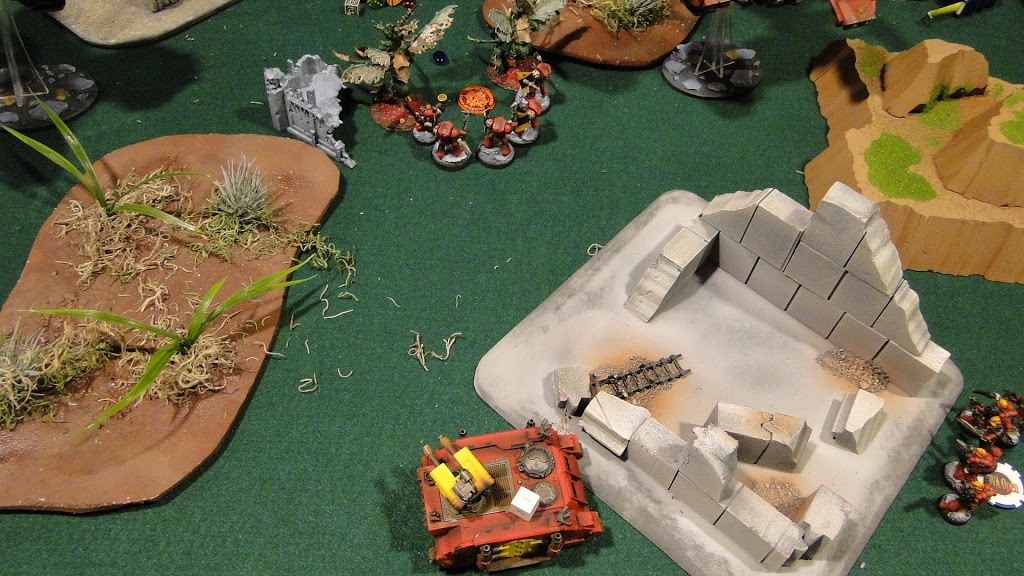 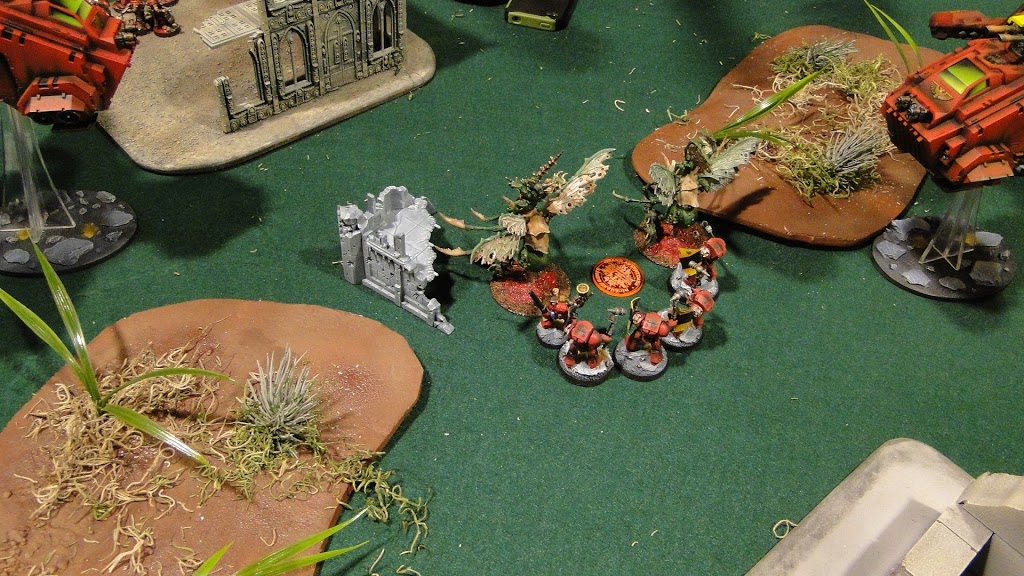 The dreadnought was destroyed by rust attacks but held long enough for the terminators and corbulo to lock these drones down.

I take 3/4 objectives, score line breaker, and slay the warlord. 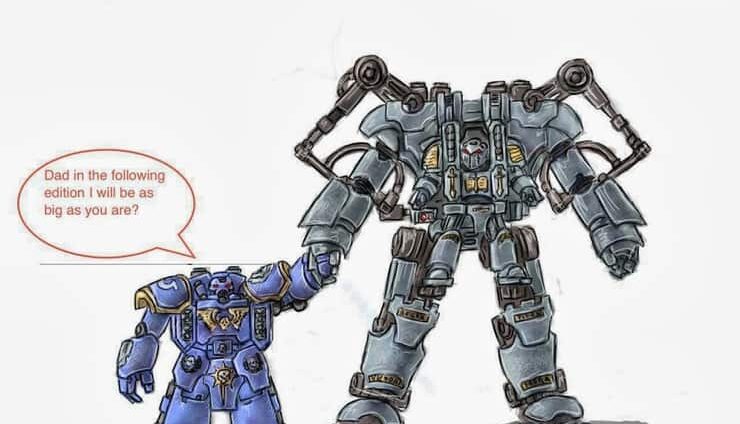 PREV ARTICLE
« Editorial- In Defense of the Centurion! 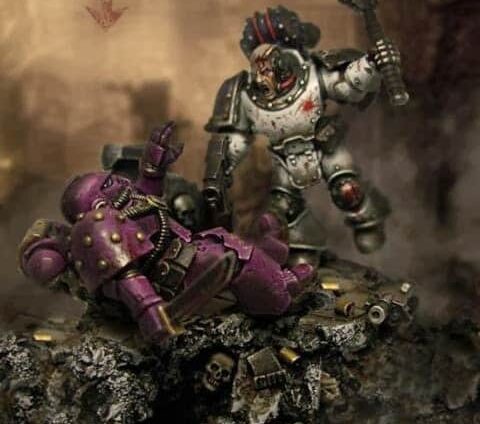 NEXT ARTICLE
Brother’s Keeper?- Army of One »
If you buy something from a link on our site, we may earn a commision. See our ethics statement.