If you were at DragonCon last year you probably saw one of the better versions of Saint Celestine Cosplay out there.

Powered by LED lights, and servo motors for the wings, this thing may just be a work of art itself!

We got to talk with the cosplayer / designer the other day, and I think I have a new appreciation for how much work goes into making a suit of armor such as this. 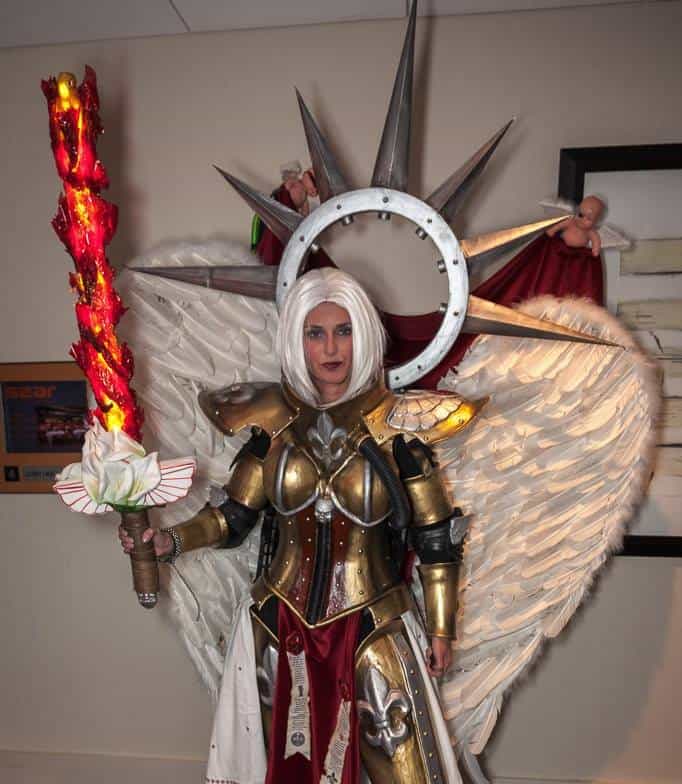 Checkout out exclusive Spikey Bits interview with Christine of Engineering Couture (and make sure you like her on Facebook).

SB – What inspired you to choose Saint Celestine as the basis for a costume?

COEC – Is saying the God Emperor too cliche? Haha. I love all things Sisters of Battle, heavy flamers, fervent faith, their iconography and just overall badassness. Who needs men under arms? The living saint is just the epitome of all of that. She’s always been a favorite of mine in mini and concept art form, oh and in Soulstorm! She was so glorious to see flying around, smiting heretics and randomly having doves explode out of her. She’s just the biggest baddest SoB out there. Everything about her is just so significant, the armor of Saint Katherine, the Ardent Blade, even the iron halo and her cherubs. There were so many details I just wanted to bring her to life!

SB – The costume’s detail looks incredible! It seems to have combined many different elements from fiberglass to LED’s and even realistic looking feathers. How long did it take to build?

COEC – The costume in total took nine months to build. You’re absolutely correct, the construction methods and materials are all over the place. The armor is epoxy coated wood filler over hand sculpted thermoplastic (soooo much sanding), which took up the bulk of the time. The sword is half melted cellophane bits wrapped around a dowel with LEDs taped to it. The halo is actually paper that’s been hardened with wood glue and mounted on speaker brackets. The feathers are real turkey feathers, two pounds of them, on a chicken wire frame. The cherubs are eviscerated dollar store toys and Christmas decor. They’re actually one of my favorite parts because they’re little wings move too and their heads turn back and forth. They’re really creepy. Plus I got to use an actual 40k decal on the forehead of the one.

SB – What more can you tell us about the wings?

COEC – The wings were one of the trickiest pieces to do. There is an army backpack frame at the base of it all, mounted to that is a linear actuator and the skeleton frame for the basic mechanism. The wings themselves are some 500 turkey rounds that were attached to a pex pipe and chicken wire frame with floral tape and glue dots, not a system I would recommend, nor personally repeat. I’ve since learned that simply hot gluing them onto a fabric backed frame results in a much easier time and less molting. The main difficulty was that the actuator had to be in the open position to keep the wings closed, which meant sitting was not an option. Also concealing all the hardware was an interesting challenge. Ultimately the actuator piston was hidden between my skirt and cape which worked out pretty well.

SB – Have you done any other cosplay outfits in the past, and if so what types?

COEC – I’ve done quite a bit of costuming but only a few real cosplays. My favorite of those, besides the Saint, is Bleez from the Red Lantern Corps. As you may be noticing I have a thing for wings… My type ranges all over the place, spandex bodysuits, poofy dresses, hand knit scale maille. I’m a mechanical engineer by trade by I also love sewing and dresses. I’m really just all over the place.

SB – Are you planning another Warhammer related costume for DragonCon 2015?

COEC – DragonCon is amazing but it was likely a once in a lifetime experience. I am planning on attending Gen Con this year and yes, planning another Warhammer costume. Another one of my favorite minis, though she lacks wings, is the Callidus assassin. I loved fielding her and I’ve wanted to bring her to life for quite a while, so hopefully I can pull it off. Though if people find themselves wanting to get in on the 40k costuming at Dragon Con or even in general there are a lot of good folks over at the Obscurus Crusade who will be there!

SB- You had mentioned something about a Sisters of Battle codex when we were talking about your costume originally, do you play Warhmmer 40k? (if so what armies)

COEC – I would love a new Sisters of Battle codex. I did play until the most recent one came out, codex that is. Ironically they made the Saint far better to field but I lost out on quite a bit else. As such I haven’t learned 6th edition, or 7th for that matter. I did begin a Slaaneshi chaos marine army but as much as I like them on paper they just didn’t have the same righteous fury that playing sisters did. So if a new codex came along, and hopefully some plastic models with it, I would love to start up again!

Keep going for MORE pics and VIDEO straight from DragonCon below!

Would you like us to feature your cosplay on the site? Drop us an email (support@ spikeybits.com) or PM us on Facebook!

NEXT ARTICLE
Combo Your Necrons! Wargear & the Mephrit Dynasty »
If you buy something from a link on our site, we may earn a commision. See our ethics statement.