Lore – The Fallen, Chaos’ Side of The Dark Angels? 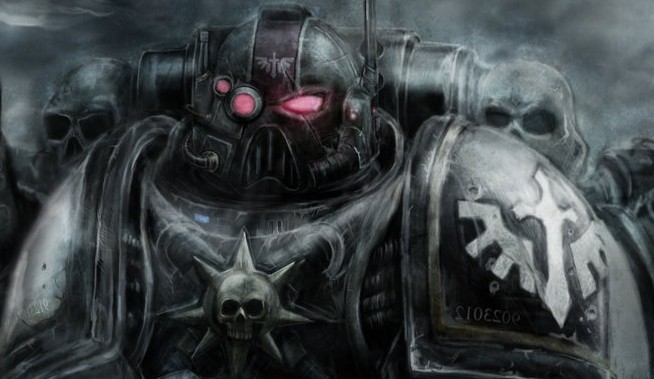 How many of your models know about The Fallen? Learn the secrets of the Dark Angels most hunted foes – the Fallen – and THEIR side of the story…

The Fallen are renegade Space Marines that split off from the Dark Angels Space Marine Legion ten thousand years ago and has since been scattered across space and time by the Gods of Chaos. They are the secret enemy of the Unforgiven, a group containing the modern Dark Angels Chapter and its successors. To those Fallen that dwell within the 41st Millennium, many have become Chaos Space Marines, others pirate and renegade warlords, while some have since regretted their heresy and live a life of peaceful seclusion.

The truth of the Fallen is lost in the mists of time during the Horus Heresy, and two completely opposite narratives exist:

At the end of the Horus Heresy, when Lion El’Jonson, Primarch of the Dark Angels Space Marines, returned to his homeworld of Caliban, his fleet was met by a devastating barrage of defence laser fire. Stunned by the ferocious attack, Jonson withdrew his vessels from orbit and attempted to find out what had happened on his homeworld.

A nearby merchant ship soon provided the answer; Luther, second-in-command of the Legion and the Lion’s greatest friend, had apparently ordered the approaching fleet fired upon. His reasoning for this action unknown to the Primarch, it was suspected that Luther, like many of the Lion’s brothers, had become influenced by Chaos. 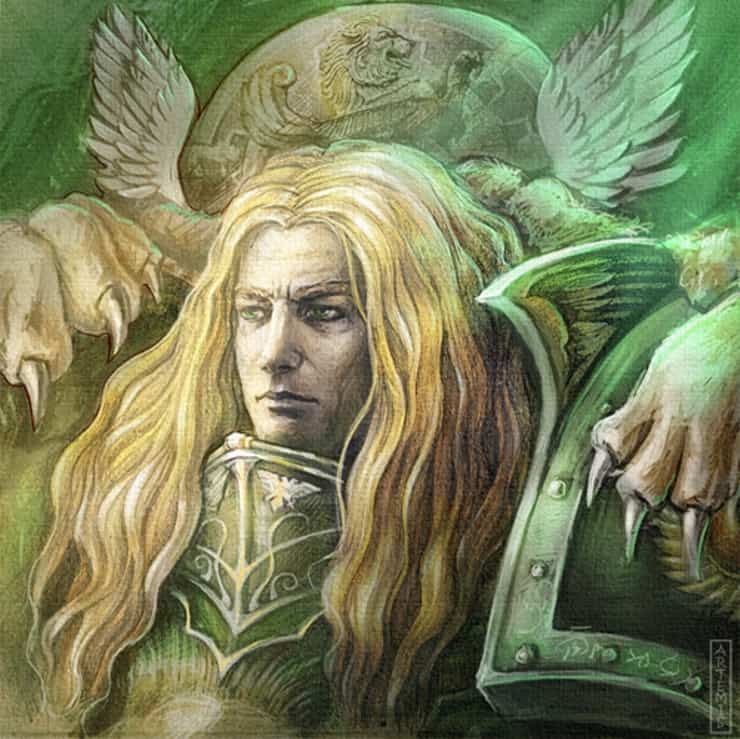 The fury of the Lion and his Dark Angels at what they perceived as a terrible betrayal knew no bounds; Jonson himself immediately ordered a sustained bombardment of the traitor positions and led an attack against Luther’s position personally. In the resultant battle the two adversaries struck blow upon blow against each other, tearing down the monastery around them until nearly the whole massive edifice had been leveled by their battle. Meanwhile, the massed guns of the Dark Angel fleet pounded the planet, until the very surface of Caliban began to crack under the strain of the bombardment.

As the planet itself started to break apart, the battle between the Lion and Luther reached its climax. Luther, apparently aided by the powers of Chaos, unleashed a furious psychic attack that knocked Jonson to his knees and left him mortally wounded. But as the dying Primarch struggled to stand, his noble features wracked with pain, it was as if a curtain was lifted from Luther’s eyes and he realised the full extent of what he had done. Devastated, the realisation shattered his sanity and he slumped down beside Jonson, no longer willing to fight.

Soon after Luther’s breakdown a warp storm of unprecedented fury engulfed Caliban. In an uncontrollable flood of psychic energy, the warp rushed into the physical universe. The immense strain these forces placed upon the planet, in combination with the tectonic shifting and cracking caused by the orbital bombardment caused the horrific end of the entire planet; Caliban itself shattered, breaking into countless chunks of dead and dying rock.

The ‘fallen’ Dark Angels who had served under Luther were sucked from the face of Caliban into the warp and effectively scattered throughout space and time.

None know of these events other than the Dark Angels, their Successor Chapters and the Emperor on his Golden Throne. Even within the Chapters themselves very few brother-Marines know the full story. It is only when Dark Angels gain entry into the  Deathwing that they learn that many of the Dark Angels who followed Luther are still alive.

There are several different types of Fallen; not all of them have succumbed to the powers of Chaos. A large number of the Fallen have become true Chaos Space Marines, but many others realise that their actions during the fall of Caliban were questionable. Others, claiming that the Lion himself was Chaos-tainted and that Luther was the true loyalist have remained unrepentant and possessed of the same ideals they fought for during Caliban’s fall. Disgusted by the perverse Chaos Gods and unable to reconcile themselves with the Imperium, such members of the Fallen often lead a solitary existence. Many become mercenaries or pirates, while others attempt to integrate themselves back into ‘normal’ human societies.

All of that is irrelevant to the Dark Angels, who believe that the only way they can restore their honour and trust within the Emperor’s eyes is if all the Fallen are found and either made to repent or are slain. Consequently, the Dark Angels and the rest of the Unforgiven constantly hunt for the Fallen and regularly prioritise it above other concerns.

Those Fallen that are captured are taken back to the Rock, where Interrogator-Chaplains attempt to make them repent. Occasionally they do and so die quickly. More often than not though, the captured Fallen refuses and suffers a long, agonising death at the hands of those who would save his soul. 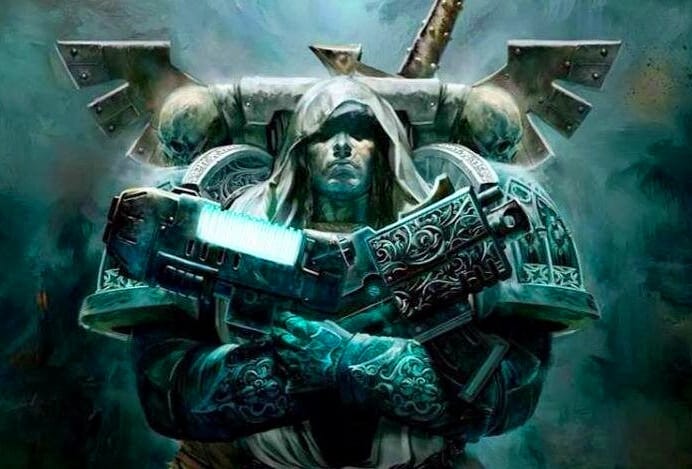 A record of the apparent motivation for the actions of those Dark Angels who would become the Fallen exists: the confession of Astelan, once a Dark Angels Chapter Master. This testimony, extracted by Interrogator-Chaplain Boreas, contains the following claims: Astelan himself is supposed to have ordered the attack on the Lion’s approaching fleet, with the approval of Luther, because the Dark Angels on Caliban believed that El’Jonson had fallen sway to the powers of Chaos. Astelan claimed that while the Lion had been lost in the woods of Caliban as a child, he had had a brush with Chaos and had never quite lost the taint of darkness from the incident. He pointed out that while El’Jonson had moved through the Warp towards Terra to join the defence of the Imperial Palace, he had moved at what was believed to have been a deliberately slow pace; a pace slow enough to determine who the true winner of the conflict would be before committing his forces. In other words, Astelan believed that El’Jonson would not have hesitated to join Horus if it had seemed that he would have been the ultimate victor in the Heresy. Why else would the Lion, a man renowned for his strategic brilliance and speed of attack, have waited so long before leading troops to Terra? Astelan believed that by attacking his fleet, the Dark Angels stationed on Caliban were doing the work of the Emperor.

Astelan further claimed that Luther never fell under the sway of Chaos but was driven by his duty to the Emperor, fearing the traitorous nature of El’Jonson. Also, he revealed that, apparently, the majority of the men who had been garrisoned on Caliban were original members of the Dark Angels, Terrans who had been inducted before the arrival of El’Jonson as Primarch. This existing form of divide may have also contributed to the conflict on Caliban. Finally, he claimed that, in the ensuing battle between the seemingly loyalist Lutheran Angels and the possibly suspect Lionite Angels, Luther attempted to negotiate with the Lion before any more were slain. Refusing to talk, the Lion hastily ordered the bombardment of Caliban and descended to crush the Fallen in combat. Luther then apparently fought the Lion only as a last resort and mortally wounded him only when he had no other choice. The only thing that Astelan could not explain was the Warp-Storm that flung the Fallen far across the Galaxy.

This entire point of view, as told by a member of the Fallen, should be considered suspect at best and complete fabrication at worst; it could simply be a series of malicious lies or just a warped, inaccurate view of the entire incident. Often, those who fall under the sway of Chaos do not even realize that they are serving its ends, except that at the end of ‘Angels of Darkness’, Boreas asks for a tranmission to be sent to a solitary cell in the rock saying simply: ‘You were right’. This cell is believed, by readers, to be that of either Astelan or Luther himself. This, from a loyal Dark Angel throws into question the loyalty of the Dark Angels, The Fallen and Lion El’Johnson himself.

In another record, Interrogator Chaplain Uzziel was attempting to draw a confession from a Fallen in the bowels of the Rock. The Fallen decried Uzziel’s attempts saying that the Dark Angels sent to Caliban with Luther were abandoned by Lion El’Jonson and the Emperor and robbed of the glory of the Great Crusade. Eventually the Fallen made a false repentance that led Uzziel on a crusade to recover the Lion Sword. Uzziel realized the repentance was false when he recovered the weapon only to discover it was in fact Luther’s Sword.

This perspective is backed up by another record of a Fallen known as Cephesus. When finally tracked down by Interrogator Chaplain Bareus he claimed the same reasoning, that the Dark Angels on Caliban had been abandoned with Luther while the Lion claimed the glories of the crusade. Bareus was mortally wounded by Cephusus, but eventually the Fallen was slain by Brother Kaelan of the Dark Angels who received a field promotion to rank of Interrogator Chaplain by the dying Bareus.

This also ties in with the perspective given in Fallen Angels (Novel) where Luther declares that the Lion has forgotten about them. He then secedes from the Imperium and is joined by many of the Dark Angels stationed with him including the Chapter Master Astelan and the Librarian Zahariel.

How many do you know?

~ Who’s right and who’s wrong? The Lion or Luther? 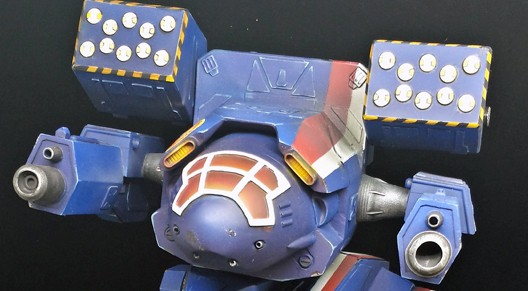 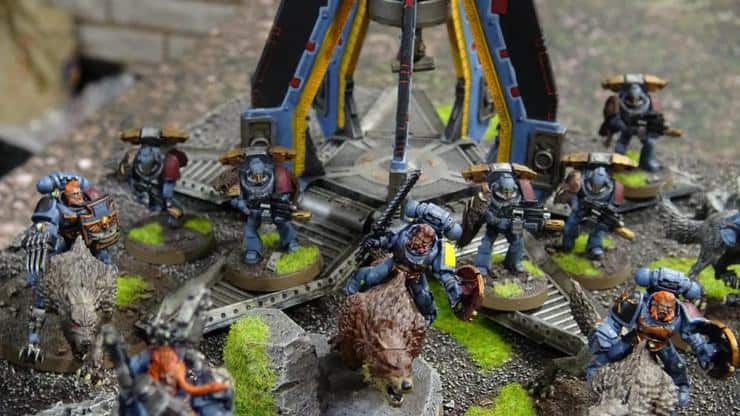 NEXT ARTICLE
The Wolves Ride at Midnight – Armies on Parade »
If you buy something from a link on our site, we may earn a commision. See our ethics statement.