Geekery: Who Do You Think Dies in The Force Awakens?

Everyone is hyped to know what happens in the new Star Wars Force Awakens movie. So who do you think dies, and why the heck have we not seen more of Luke?

YOU HAVE BEEN WARNED!!!

So there are less than 10 days left until the premier of Force Awakens, and everyone is very VERY eager to learn WHAT HAPPENS!!!!

Now before starting, repeat this mantra to yourself a few time:

“Everything that is old is new again.”

This is a very important concept for Ep 7 (and apparently JJ Abrams movies. KHAAAAANNN!!!!)

But there is one really big question with a lot of fan theories. I am going to throw my own into the mix here and try to give a good amount of supporting evidence.

Who is the dead guy in the fore ground she is crying over? Spilled Blue Milk? Stop here if you find yourself saying NOPE! I don’t want to know more! Mind you this is all speculation BUT…

I think it is LUKE SKYWALKER! BAM Sorry if this ruins EVERYTHING for you, but there it is. Now for WHY I think it is him.

First of all I am going to get all the clone wars stuff out of the way. And I mean clone wars as in the TV show. With Disney purchasing the rights to star wars and nuking the expanded universe, there is very little Canon left, but the computer animated show is one of the largest chunks.

Now we all remember this from the end of Return of the Jedi right? 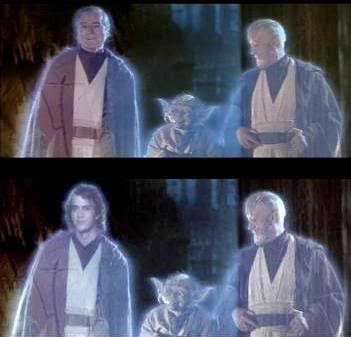 Either version, doesn’t matter for the argument I am making. You have Anakin, Yoda, and Obi-Wan, all as spooky force ghosts. We are just left to assume this is something that happens to Jedi.

WRONG!!! In the clone wars series it becomes well established that a person, jedi included, loose their identity and become one with the living force when they die. SO how are there Ghosts? Well apparently at some point Qui-Gon Jinn learned how to prepare himself for this and return as a ghost. When he did, he made himself only known to two people, Yoda and Obi-wan. 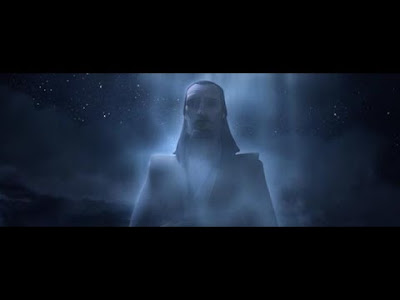 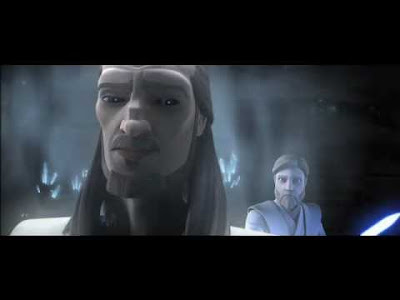 So Obi-Wan kinda rejected this at first, and took it as a consequence of them being in force heaven where he, Asoka and Anakin all meet Force God, Force Angel and Force Devil (yes I am not making that up, look up the Episode “Overlords” S3 Ep15 on Netflix). However, later Jinny ghost here leads Yoda to Dagobah, a place VERY STRONG IN THE FORCE (Enough so to hide him from Vader) at the very end of the Clone Wars and teaches him how to commune better with the force and prep him for Ghost mode one day. Then at the end of Episode 3, you have Yoda telling Obi-Wan to go commune with Qui-Gon on Tatooine, and it you remember, Obi-Wan is SHOCKED. This is because it is NOT SUPPOSED TO BE POSSIBLE. But it obviously is, so they all 3 learn.

That is Anakin with Force God. If Anakin was a virgin birth, does that make Force God his dad?

ANYWAY, let us assume by him being THE ONE and balancing the force that he is able to have this Ghost ability to come back and pow wow with Yoda and Obi-Wan at the end of RotJ.

SO the only four people who know how to do this spiffy ghost trick are Qui-gon, Obi-Wan, Yoda and Anakin/Vader. 3 of the 4 know Luke PERSONALLY and the first one was Yoda’s padawan, Obi-Wan’s master and the one who found and saw the potential in Anakin. All three of whom have a profound and, if the end of RotJ is anything to go off of, long lasting effect on Luke. SO it is easy to believe that Luke learns the spiffy ghost trick too.

WHY IS ALL OF THIS IMPORTANT?

Well if you noticed, you only see Luke once in the trailers, even though we KNOW Mark Hamill is in the movie. You don’t even see his face, just his robot hand and his favourite droid.

Now I want you to repeat the mantra from the beginning.

Okay, NOW in the original trilogy, Obi-Wan dies and becomes a Ghost/disembodied voice that guides Luke. With an obvious “I glow blue and you can see through me” effect… 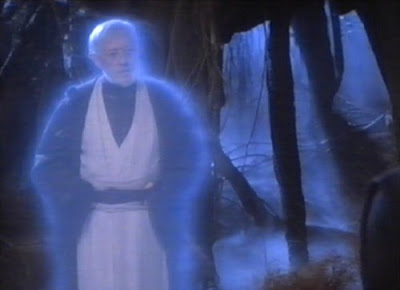 SO if the same happens to Luke, and he becomes either a ghost or a voice (and remember, Mark Hamill is a BIG TIME voice actor) then they can’t really go showing that in the trailers can they? It would give a MAJOR plot point away. However, it would be in the footsteps of the original and part of the “Everything that is old is new again.” approach.

NEXT- Death Reactions
Look at this face:

Now look at these… 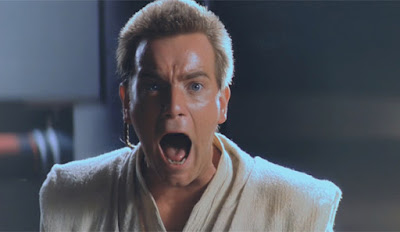 SO the reaction of Rey seems, to me at least, to be a good blend of all of these. Outrage, loss, sadness, despair. Yes these are all typical death emotions, but the firs two should really display how important it is to echo things in Star Wars. Obi-Wan and Luke both shout “NO!!!” and are shocked by the death of their master, it basically the exact same way. So I can see how these 4 deaths would be proper motivation and direction for the death of Luke as witnessed by Rey in episode 7.

NOW- Leia and the lightsaber.

So there is this scene. 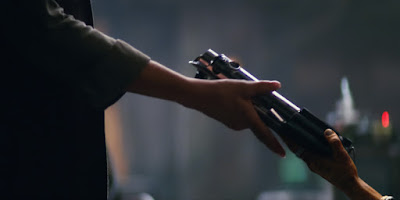 Now that is Leia on the left. For sure. First of all in the trailer the Luke voice over says “My sister has it” at this very part. And then, even more obvious about it is the clothes. They are hers, and you see her wearing them a few times in the trailers.

Above though you see what appears to be someone handing her Anakin’s lightsaber. The one Luke lost on cloud city with his hand. WHO KNOWS how it got found, but apparently Orange Skin Alien in the bottom right got it. But why give it to Leia and not Luke? And if it was so that she could give it to Luke, then why does Leia instead give it to Finn (that black Stormtrooper turned Jedi)?

To reinforce this concept, we have this scene.

Now this could be a tearful reunion, however, it more so seems like she is very distraught, much like the “Hold me” scene from RotJ (remember: “Everything that is old is new again.”) and she is more so mourning the loss of her brother, and so of course hugs the man who was the next closest to both of them, Han. To me this is that kind of embrace. One where you see someone you have experienced mutual loss with. That just is the vibe I get.

AND LASTLY- Ren and (toasted) Vader…
So finally there is this guy:

Kylo Ren. Somewhat of a Vader nut it seems, promising to “Finish what you started”… to this guy…

To me that means only one thing

THE EXTERMINATION OF THE JEDI!!!

This is big. This is a complete running theme through EVERYTHING that is canon that is left. From Darth Maul saying “At last we will have our revenge” to Order 66 and the destruction of the Jedi Temple/Order, to the YEARS of Vader and the Inquisitors (from Star Wars Rebels, the current TV show that is canon) hunting and killing ALL the remaining Jedi and abducting force sensitive children to prevent new Jedi from being trained. This seems to be an over arching Sith/Darkside goal, and so a pretty important thing to finish.

And if Luke is the last Jedi- of course Kylo is going to kill him, just like Vader killed Obi-“Everything that is old is new again.”- and then had to hunt down the last apprentice (Luke), which in this case appears to be Finn.

SO That is my case for why Luke is the mysterious dead guy. But don’t worry, that doesn’t mean he won’t be in the movie. He will likely just be blue ghost, just like all his pals.

PREV ARTICLE
« C’mon Man- Where Are the Plastic Sisters of Battle?

NEXT ARTICLE
40k COSPLAY – Fateweaver Takes The Stage! »
If you buy something from a link on our site, we may earn a commision. See our ethics statement.