Come see the background of the Red Scorpions, the most secretive chapter of Space Marines out there besides the ones affianced to the Inquisition.

From Our Friends at Lexicanum The origins of the Red Scorpions Chapter are unknown. No records remain of the chapter’s founding or from which Space Marine Legion their geneseed was first taken. This secrecy has led to some of the Imperium’s hierarchy questioning the loyalty of a chapter that keeps its history secret and holds itself answerable to theEmperor alone. Despite this, the chapter assists wherever it can, carrying out thousands of relief missions. It is known, however, that the chapter has existed for at least 5,000 years. The Chapter is noted for the purity of geneseed tithes which is heavily tied to its fanatical belief in purity, in deed and thought as well as physically. According to an assessment of progenoid samples by Inquisitor Lord Varius‘s acolytes, the Chapter retains over 94% purity, with the only exception being an overactiveBetcher’s Gland. It was for this reason that Varius chose the Red Scorpions as the gene source for his proposed new founding to counter the Tyranid hive fleets. However, the Chapter has repeatedly refused to allow more samples to be examined by the Inquisition or the Adeptus Mechanicus Biologis.

The location of the Red Scorpions’ Fortress-Monastery is a well-kept secret. The only people outside of the Chapter who know where the Red Scorpions are based are high-ranking members of the Administratum.

Recruits are drawn from Zaebus Minoris, a small, arid world inhabited by primitive tribes of humans. The tribes’ traditions tie into the recruitment process of the Chapter. Missionary Galactica reports that all male infants are presented to their tribes’ temple at the first full moon of its life. A few are taken by the “gods” – selected, after stringent genetic testing, by Chapter Apothecaries as potential future Marines. Because these recruits will have had no experience with their parent culture, the Chapter is all these recruits will know. The monastery itself is a large battle-station which orbits the moon of Zaebus Minoris, and from this base the Chapter sends strike forces out across the galaxy to destroy those who would threaten the Imperium. Indeed, they could almost be considered a Crusading Chapter because they treat Vigil as a simple base of operations rather than the centre of a great realm. The Chapter’s armoury is well-stocked, and they are known to field a wide variety of vehicles, particularly Drop Pods and Land Raiders. Their forge is renowned for its ability to maintain (and manufacture in limited amounts) a variety of patterns of Astartes Power Armour, especially the treasured Mark IV pattern, commonly issued to the Chapter’s veterans as a sign of rank. The Red Scorpions are also famous for the quality of their arms, and extraordinary weapons such as power swords, axes, or fists are also issued to the veterans, fulfilling both a practical and symbolic purpose. This association of military rank with quality wargear is exemplified in a collection of relic blades known as the “Tears of the Scorpion“, each with its own legend and wielded by one of the Chapter’s Commanders. Indeed, the only shortage of any kind of wargear that the Red Scorpions have is a dwindling supply of Terminator Armor due to heavy use, notably during the Siege of Vraks, Anphelion IV, and the Badab War. The Red Scorpions consider the Codex Astartes as religious scripture, and their chapter organization closely follows codex standards. The chain of command within the Chapter is highly authoritarian, and all orders given by a superior are to be obeyed without question. Captains are called Commanders, and the Chapter Master is known as the Lord High Commander. The Master of the Apothecarion traditionally holds the position of second-in-command due to the Chapter’s emphasis on purity, and they also maintain a larger Apothecarion. The Chapter’s Apothecaries are often attached to Tactical squads to ensure the retrieval of the Chapter’s geneseed. Being a Codex Chapter, the Red Scorpions favor a combined-arms approach to the destruction of the Imperium’s enemies whenever possible. Each Battle-Brother is expected to be a master of all forms of warfare described in the Codex and available for re-assignment to different squad types and companies as the need arises.

Although the Chapter relies heavily on the Codex Astartes for strategic and tactical deployments, it can unexpectedly innovate when circumstances dictate. A particularly notable example is the Siege of Helios, where the Chapter’s Techmarines developed the Land Raider Helios due to their distrust of the Imperial Guard assets fighting alongside them. The Land Raider Helios has now been adopted by many Chapters and was recently approved by the Mechanicus. Despite being fully capable of undertaking covert operations, the Red Scorpions abhor them, and prefer to face their enemies proudly bearing their colors. This, combined with a reduced Scout Company due to strict recruitment standards, ensures that the Chapter’s Neophytes are often deployed in the main battle line as an auxiliary force.

The Red Scorpions do not seem to venerate any Primarch above the others, giving their devotion solely to the Emperor. Some say that their strict adherence to the Codex Astartes shows that they are aSuccessor Chapter of the Ultramarines, but there is little other evidence to support this besides the purity of their gene-seed. Indeed, the preservation of their gene-seed is the Chapter’s core belief. The Red Scorpion’s devotion to the purity of their gene-seed has made them isolationists, scorning those who they believe are less pure or deviate from the Codex, and they will go to any lengths to retrieve the Chapter’s due from their fallen Brothers. They will not serve alongside abhumans, and view all the other military arms of the Imperium as untrustworthy.They are also staunch traditionalists and protectors of authority, and are quick to aid Imperial governors or cardinals faced with rebellion. The Red Scorpions are also extremely xenophobic, detesting the alien and the mutant in all its forms.

More recently, they have been involved in operations against Hive Fleet Kraken and the growing Ork empire of Urgok the Unstoppable.

The Red Scorpions are assumed to have a large fleet at their disposal, given their history and salvage rights following the Badab War, but so far only three ships have been mentioned in official GW material and Forge World publications to date – the Battle Barges Auel’s Bane and Sword of Ordon, and the Strike Cruiser Arx Fidelis. 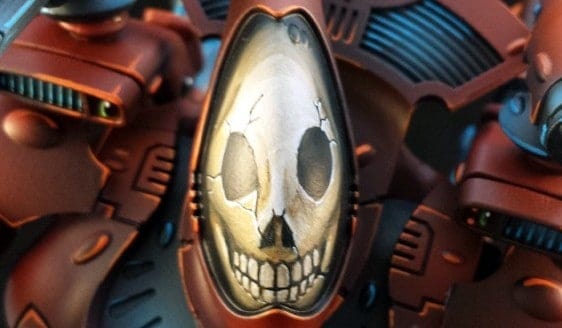 NEXT ARTICLE
Eldar’s Walking Dead – Knight Army of One »
If you buy something from a link on our site, we may earn a commision. See our ethics statement.