The Realmgate Wars: Balance of Power $74

New powers arise in a massive, desperate series of quickly-escalating battles in the Mortal Realms.

The Realm of Life is falling apart. Athelwyrd has been destroyed. Alarielle and the sylvaneth flee, as Chaos begins to exert its festering grip; Realmgates are corrupted and even the Stormcast Eternals may not be enough to stop the putrefaction. In the Realm of Fire, the Skaven make their move against the Fyreslayers. In the Realm of Metal, Vandus Hammerhand leads a Stormhost in an attempt to stop the Lord of Change Kiathanus gaining indescribable power. And if these threats were not enough, the Exalted Grand Marshal of the Apocalypse himself makes his presence felt…

The Realmgate Wars: Balance of Power is Book 2 in the exciting Realmgate Wars saga! This book contains, alongside dramatic narrative advancing the story of Sigmar’s Stormcast Eternals’ attempt to restore Order to the mortal realms:

Four new Time of War sections – rules that anyone with any army can use for fighting in fantastical locations that wildly change the way Warhammer Age of Sigmar games are played;

Ten new Battleplans – any Warhammer Age of Sigmar army can be used to play out these scenarios, including desperate defence, a surprise assault and a special four-player Battleplan!

Incredible artwork showing off the power and awe of the events sundering the Mortal Realms!

The Realmgate Wars: Balance of Power is a full-colour 304 page hardback. It sounds like the Mortarchs have been vying for control over Nagash – King Lear style. The inter-realm Skaven gnawhole network.  Kind of like the Eldar webway – but it smells like rat pee. Cruel and powerful servants of the Dark Gods, the Slaves to Darkness march through the mortal realms in an unstoppable wave of carnage, laying waste to all who oppose them, and being rewarded richly for their deeds. Almost uncountable in number, their ranks have swollen as more and more mortal champions have fallen to their will – lost to the madness of Chaos, they commit ever increasing atrocities to prove themselves worthy.

This boxed set is a fantastic, instant collection of gruesome Slaves to Darkness miniatures, which you can use to bolster an army or even as the foundation for a new one! You’ll receive a Chaos Lord on Manticore, five Chaos Knights, a Chaos Chariot, a Gorebeast Chariot, sixteen Chaos Warriors and ten Chaos Marauder Horsemen! And a bunch of characters… The Emperor’s vision of mankind ascendant lies in tatters. The Great Crusade is naught but a fading memory. The dream of Unity is no more. But with Horus’s rebellion spreading to every corner of the Imperium and war engulfing new worlds and systems almost daily, there are some who now ask: were the signs there to be seen all along? In these dark times, only one thing is certain – the galaxy will never know peace again, not in this lifetime or a thousand others…

This anthology contains twenty-one stories from the Horus Heresy:

Sermon of Exodus by David Annandale

The Laurel of Defiance, A Safe and Shadowed Place & Twisted by Guy Haley

Hands of the Emperor & The Harrowing by Rob Sanders

Virtues of the Sons by Andy Smillie

All That Remains & Gunsight by James Swallow

By the Lion’s Command by Gav Thorpe

These stories have been previously available in the anthologies The Imperial Truth, Sedition’s Gate, Death and Defiance & Blades of the Traitor. The histories of the Great Crusade record that it was the Alpha Legion that conceived of the deployment of Legion Seeker squads. Whilst this unit configuration spread to other Legions, the Alpha Legion further refined the concept to create Headhunter Kill Teams. These supremely skilled infiltrators specialise in creating conditions of all-consuming chaos among the enemy’s ranks, sowing confusion by eliminating key officers, positions and assets.

Headhunter Kill Teams are made up of the most skilled infiltrators and assassins in the Alpha Legion. They have access to some of the most prized wargear their Legion can provide, including special ammunition conceived specifically to penetrate armour up to and including Legiones Astartes battle plate. In the ranks of a Legion already renowned for its ability to infiltrate, misdirect and assassinate, the Headhunter Kill Teams are nigh unsurpassed.

This set is compatible with both resin and plastic Space Marine armour.

~What are you down for this week? 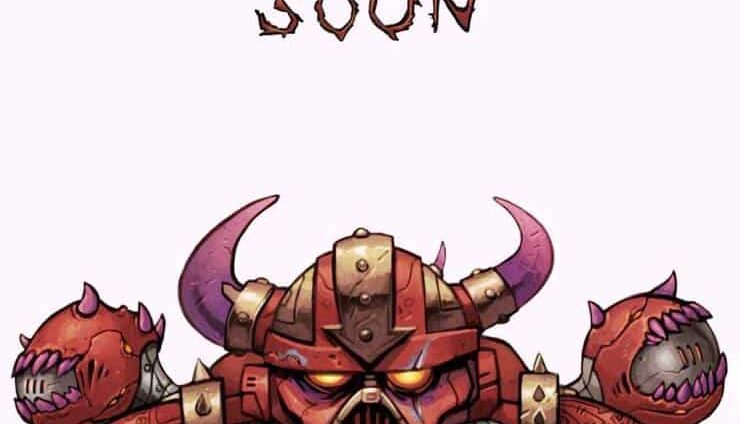 NEXT ARTICLE
40k’s New First Turn Assault! – The Rise of the Wulfen »
If you buy something from a link on our site, we may earn a commision. See our ethics statement.