Hey there X-Wing fans! Today we will take an in depth look at one of the Top 4 Lists from the Hoth Open that debuted at Adepticon 2016.

This list was run by Team Covenant’s own Zach Bunn and featured some Imperial Aces with the Emperor shuttle as escort. Let’s dive in and take see what makes this list tick.

This list features only two Imperial Aces, but they are two of the deadliest ships in the game. Darth Vader comes with a built in Push the Limit that allows him to perform two action in one turn with not stress. This allows him to reposition as he sees fit, or allows him to “turtle up” with tokens to brace for incoming range 1 blaster fire. His Advanced Targeting Computer helps make his 2 primary attack more potent with the free crit he can add to his attack roll.

The Inquisitor is a sort of sniper ship that loves to stay at long range and dish out damage with his “always fires at range 1” ability. His dial plus Push the Limit allows for optimal action economy with an added flexibility to maneuvers while shedding stress. But stress shouldn’t be a problem in this list with the help of Captain Yorr. 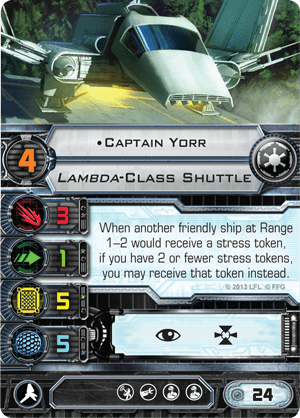 Captain Yorr pilots the Lambda shuttle, but his power lies in his support ability. Friendly ships at range 1-2 can place ther stress tokens on Captain Yorr instead of their ships. This allows the Inquisitor to Push the Limit stress free or allows Darth Vader to perform a Koirogan turn with no stress on him. This is beautiful as Ace ships with no actions really suffer. Another added trick to this list is the addition of the Ion Projector on a large based ship. This upgrade acts as an Anti Pursuit Lasers that deals Ion tokens as opposed to damage. 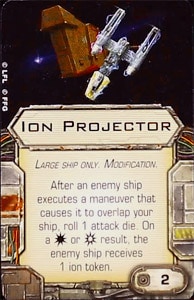 With its large base, the Lambda shuttle can act as a blocker, ion a ship that bumps, and essentially keep it locked in place. The ioned ship can only perform a 1 straight maneuver, and the shuttle could perform the same as well, preventing either ship from moving for quite some time. With the Emperor in the fight, he can ensure that the unlucky enemy ship will always receive that ion token! While its locked in, the two aces can swoop in for the kill to deliver the deathblow.

Its always to see interesting variations of meta game lists tha add an element of surprise to the table. Try this list out with your friends and see if you can get the same ion lock effect going as Zach Bunn used to thwart his foes.

Keep flying out there and always remember to have fun!

NEXT ARTICLE
NEW 40k – White Dwarf Teaser Means More 40k in June? »
If you buy something from a link on our site, we may earn a commision. See our ethics statement.