Come see the new images of the Fall of Cadia supplement that were just spotted from Games Workshop, that tease the fate and contents of the new supplement!

Black library has the goods today on the happenings in Cadia, and things are looking grim for the Imperium indeed.

The Lord Castellan Ursarkar E Creed along with Cadia, have perished. The former at the hands of Abaddon himself. 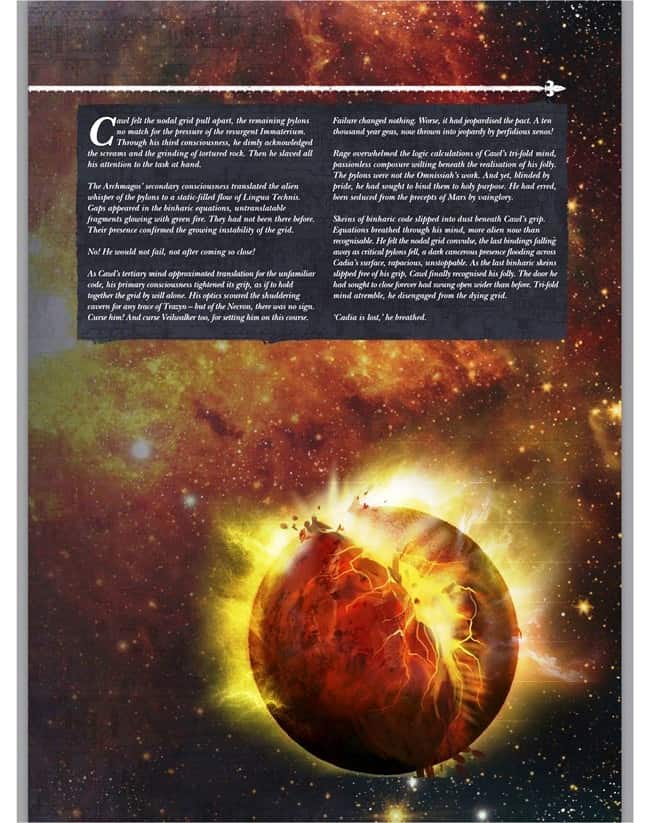 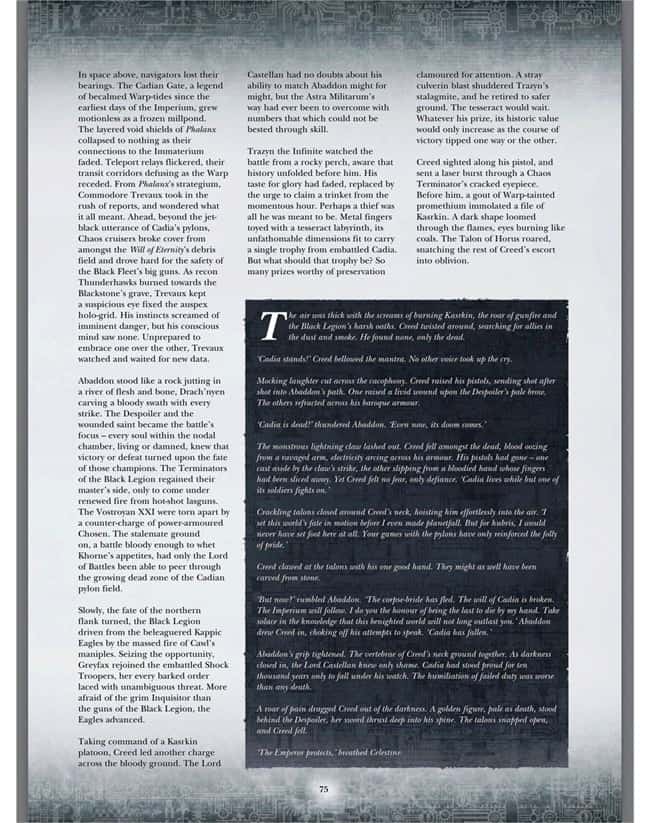 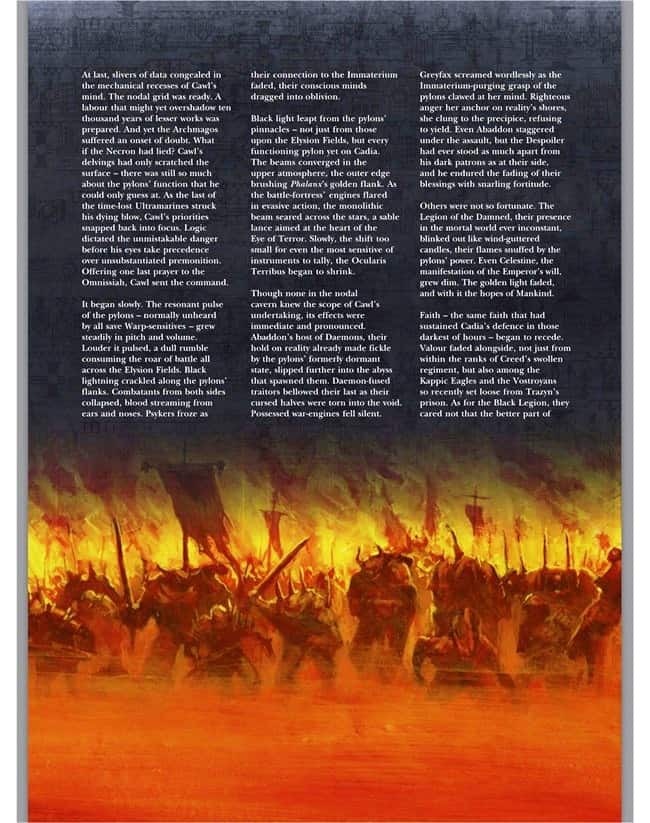 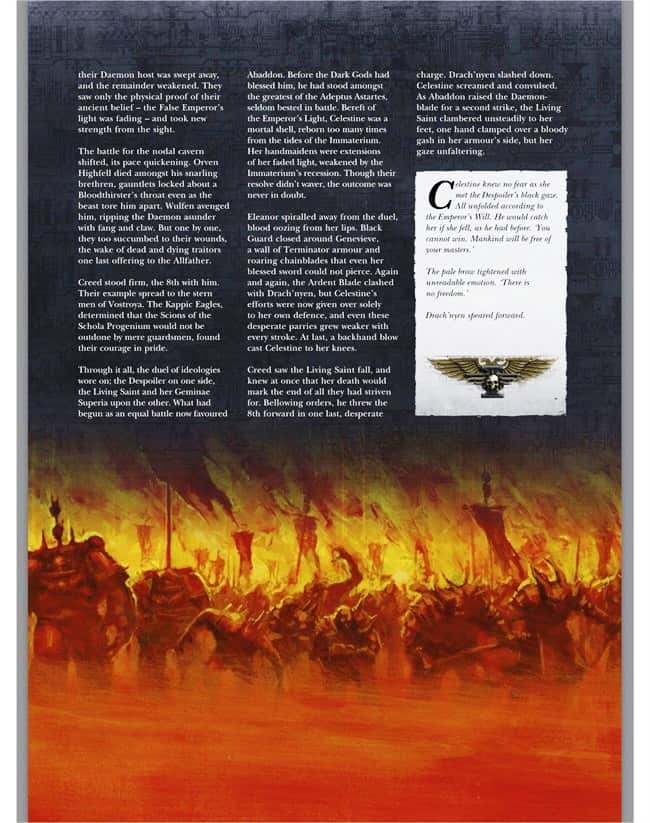 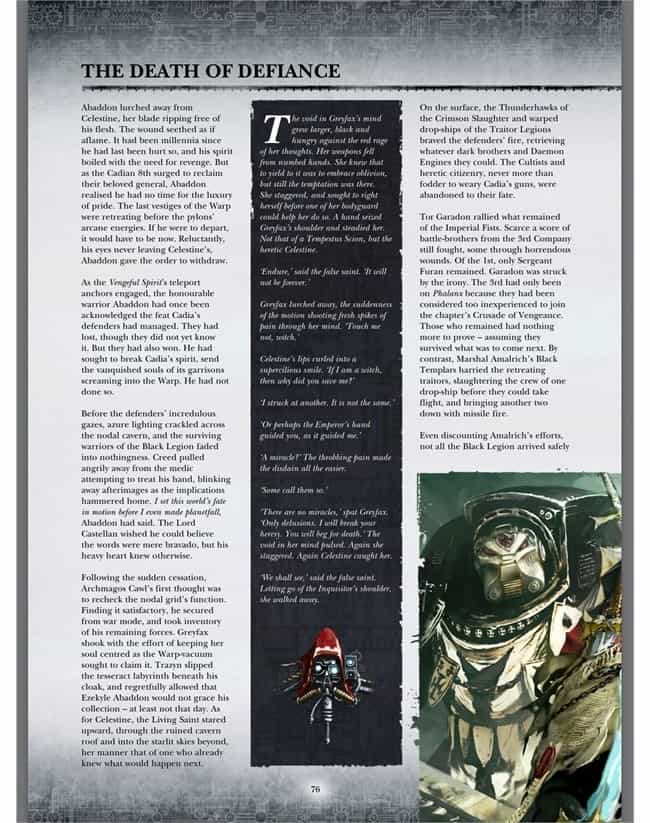 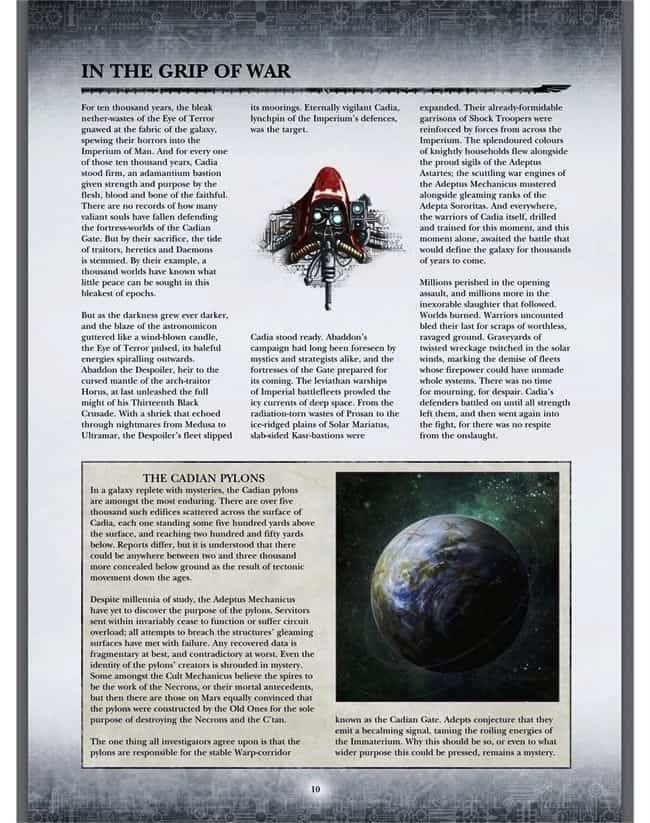 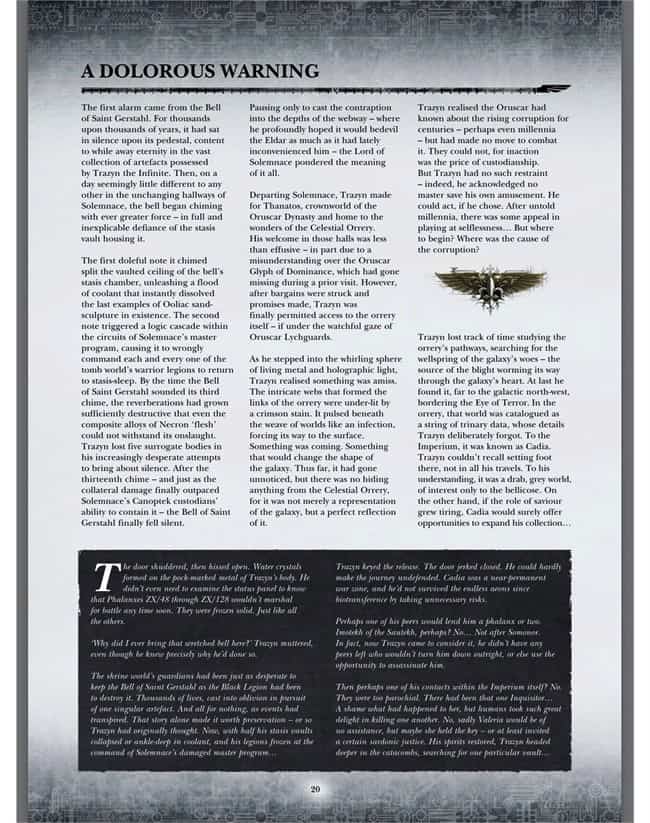 Big things are happening in this book. Is it the Time of Ending just as Jes Bickham put it in this months issues of White Dwarf?

January’s White Dwarf is here with some great insight on Gathering Storm: Fall of Cadia, and we’ve brought you the pictures to see for yourself.

First off there seems to be little doubt about Cadia’s fate right now: 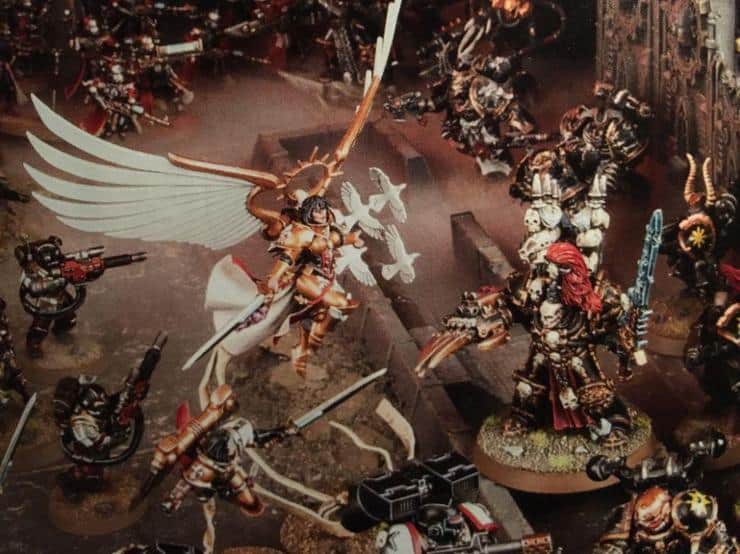 Celestine the living Saint is spotted flying into battle, with doves under her wings, roses on her sword, and an army ready to destroy Chaos. The battle report features these two giants of 40k squaring off. 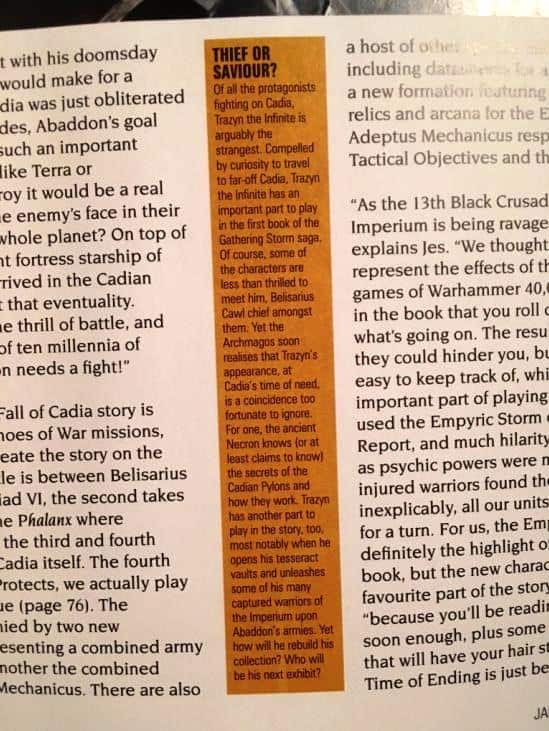 Even though he is not favored, Trazyn the Infinite shows up with perfect timing in Cadia’s time of need claiming to know the secrets of the Cadian Pylons and how they work. He also releases Greyfax from her Tesseract prison (see 5th Ed Matt Ward Grey Knight and Necron Codex fluff) and she sets about reinforcing the beleaguered imperials. 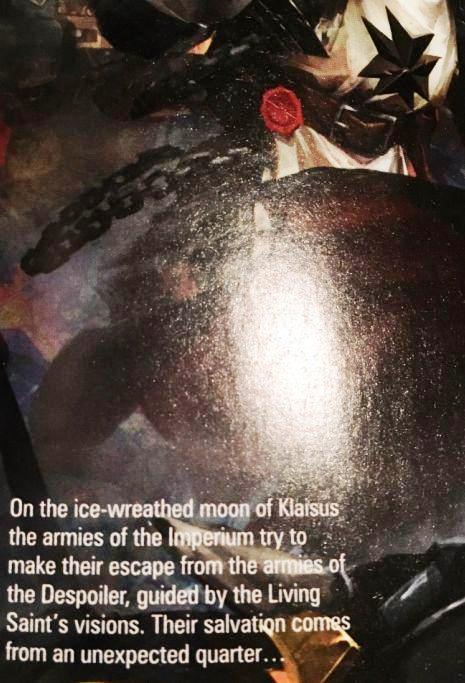 This mysterious picture is now explained a bit better: 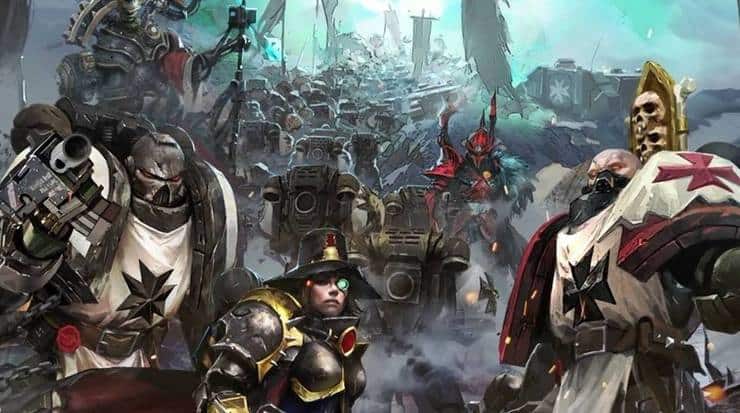 And it looks like the clues about the mysterious warrior in red were spot on so far: 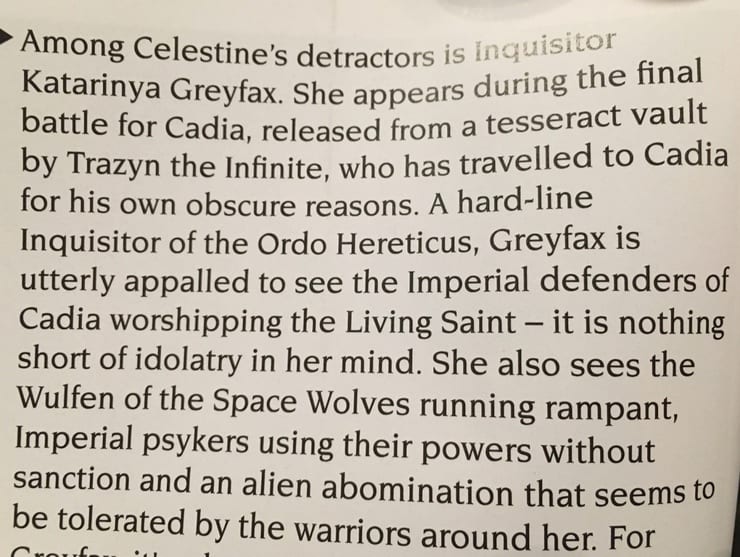 More on the Gathering storm, new rules and more for February. Is something BIG really coming to paint splatter? Maybe a Lord of Change? 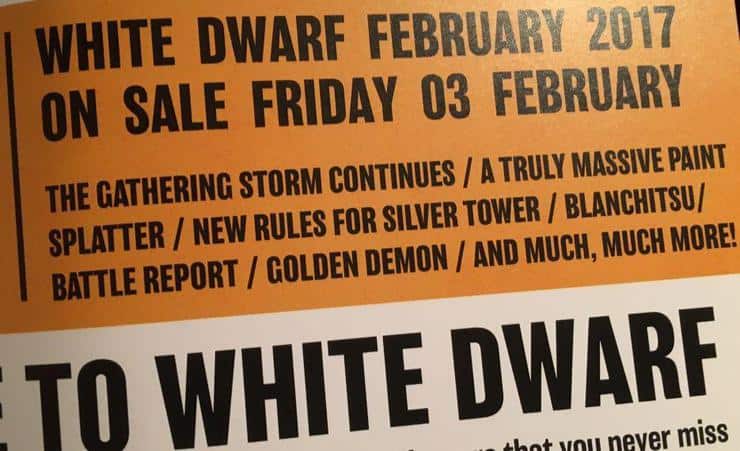 The Silver Towers are starting to seem like a maze of torture for any and all heroes who enter. The Gaunt Summoner’s amusement is of the utmost importance. Will anyone be fortunate enough to take them down? Or will everyone who enters get stuck roaming their halls as they spread their horrors across the lands?

Disciples of Tzeentch goes on pre-order Jan 7th the same week the Fall of Cadia releases. 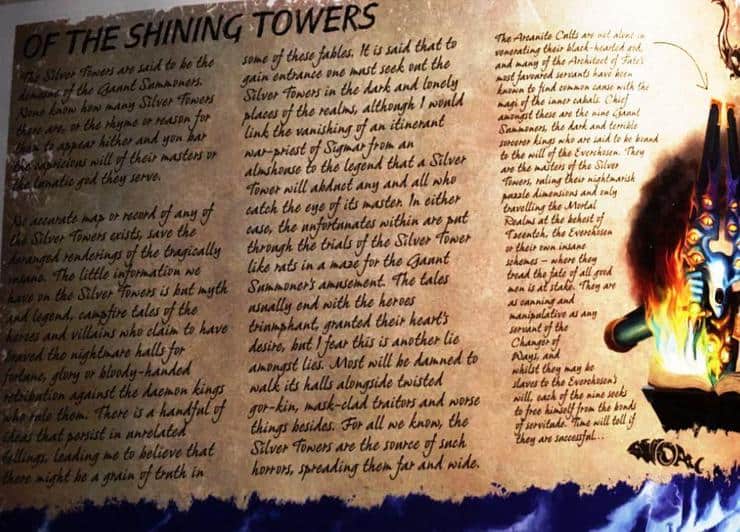 Bonus spoilers, the Imperial Fist’s Phalanx fortress is on station is Cadia still beset by Chaos and Daemons, as the Guardians of Terra holed up deep within the ship prepare to sell themselves dearly.

The Gathering Storm Continues… Keeping our attention and keeping us guessing for another month. Hopefully some of the questions we still have will be answered in February’s White Dwarf.

PREV ARTICLE
« Deals For Days? GW’s New Armoured Assault Bundles – UNBOXED
NEXT ARTICLE
How Magnus Became a Daemon Prince – LORE »
If you buy something from a link on our site, we may earn a commision. See our ethics statement.