Banished by the Emperor and avoiding arrest, Magnus disappears. When seen again he had risen to status of Daemon Prince of Tzeentch.

Magnus returned to Prospero, intent on pursuing his sorcerous experiments in secrecy. He peered into the Warp, and saw a vision of Horus’ revolt and roles all the legions would play, except his own. Entering the mind of his brother while it was under a Chaos ritual initiated by Erebus and Cultists on Davin, Magnus attempted to persuade his brother away from heresy and remain loyal to their father. However when that failed, Magnus decided to warn the Emperor via an astral projection spell rather than the much slower mode of astropathy.

As his disembodied spirit blazed through the Warp, he came across a Webway corridor that led to Terra. Unbeknownst to him, this particular corridor was constructed by humans, a part of the Emperor’s secret Webway project. Magnus tried in vain to breach the wall of the corridor, but then an anonymous voice from within the Warp offered Magnus the extra power he needed, and the overconfident Magnus accepted without question.

Magnus tore a breach in the wall and followed the corridor to Terra, bursting through the portal beneath the Golden Throne. The breach allowed daemons to invade the Webway and ruin the Emperor’s Grand Work. Enraged, the Emperor did not listen to Magnus’ warning and banished him from his presence. The breach inside the Webway went on to become known as Magnus’ Folly. 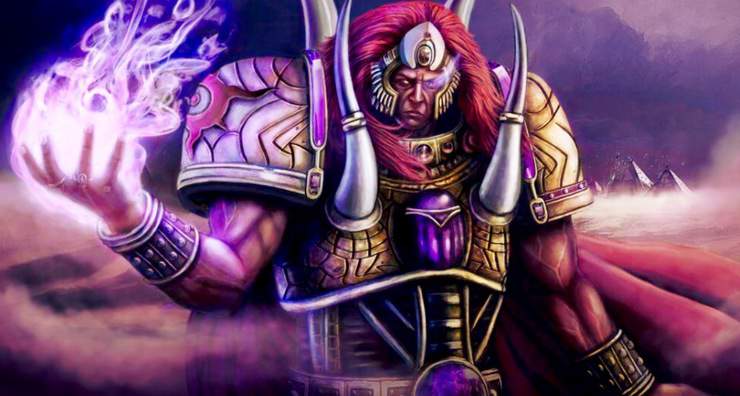 The Emperor dispatched Leman Russ and his Space Wolves to arrest Magnus and bring him to Terra. On the way to Prospero, Leman Russ received new orders from the now-corrupted Horus who changed the order to read that the Emperor had changed his mind and wished the Thousand Sons destroyed. In the ensuing Burning of Prospero,

Magnus watched in horror as the great libraries and arcane archives he had worked so hard to create were burned to the ground. Engaging Leman Russ in combat, just as the Space Wolves Primarch was about to strike the final blow, Magnus and his forces disappeared into the Warp thanks to a ritual he had helped prepare with Ahriman. There, Magnus found what he had wanted: unrestricted psychic powers and an opportunity for vengeance. Eventually giving himself to the forces of Chaos, Magnus took all that he had from Prospero, from the Imperium, into the Warp forever.

Magnus’ physical form had been destroyed in battle against Russ, and now existed as a being of corporeal Warp energy in the Eye of Terror alongside his legion. Magnus later appeared as an ethereal projection on the ruins of Prospero to Jaghatai Khan and told his brother it was time to finally choose a side in the conflict. Magnus again appeared on board the Salamanders Battle Barge Charybdis, this time as a mental projection.

There, Magnus conversed with Captain Artellus Numeon, asking him what he would sacrifice to see Vulkan restored and seemingly helping the ship through the Ruinstorm. Magnus’ words to Numeon eventually were the catalyst for the Salamanders Captain to sacrifice himself to resurrect Vulkan. 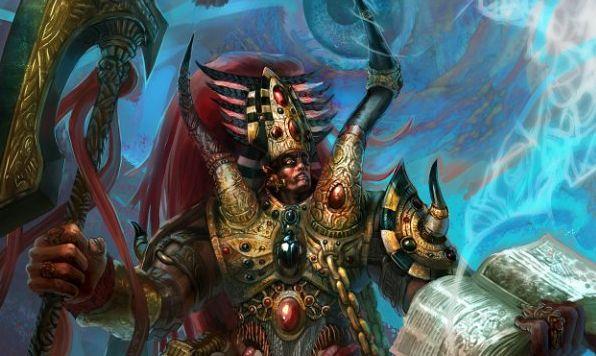 The next time Magnus was seen in physical form, he had gained the status of Daemon Prince of Tzeentch. Magnus eventually joined forces with the Traitor Astartes led by Horus, taking part in the Siege of Terra as vengeance against the Emperor for betraying him.

FInd out more about Magnus 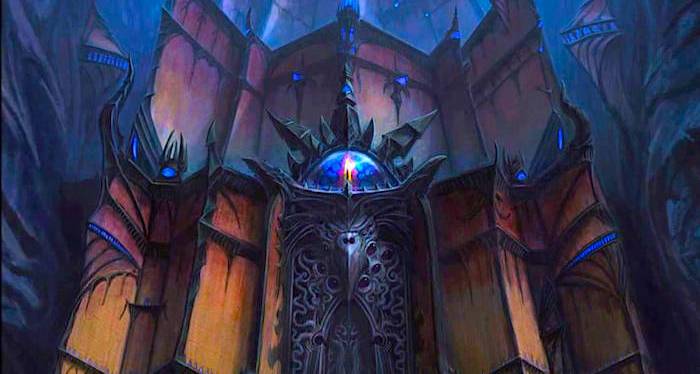 NEXT ARTICLE
Knight of Tzeentch! – Conversion Corner »
If you buy something from a link on our site, we may earn a commision. See our ethics statement.