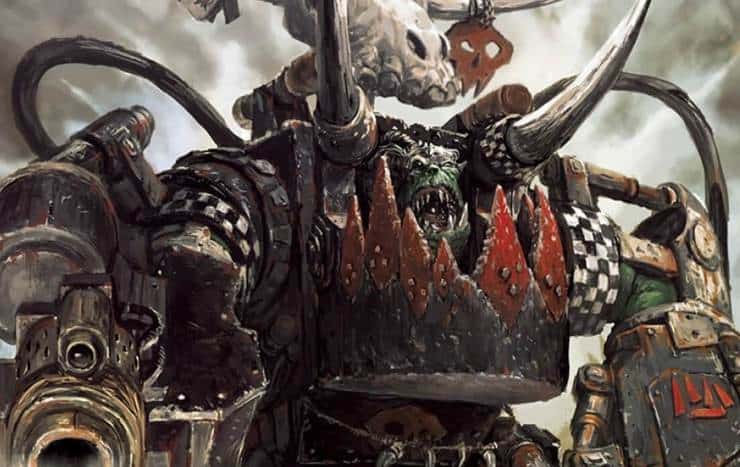 If you love Xenos like the Eldar or Orks, you will not want to miss the new Warhammer 40k formation detachments that are coming in Vigilus Defiant.

Whether you play Imperium or Xenos your questions on what new 40k detachments will do for your army may have just been answered.

Games Workshop has previewed some of the new special detachments and rules from the new Vigilus supplement book over the past few days, and now we have all 22 of the formations from a book reviewer over the weekend!

We cleaned up a lot of these images and tried to make them as large and as readable as possible for everyone so you could get as accurate of a preview of the new rules as possible!

Without any more delay, let’s dive in! 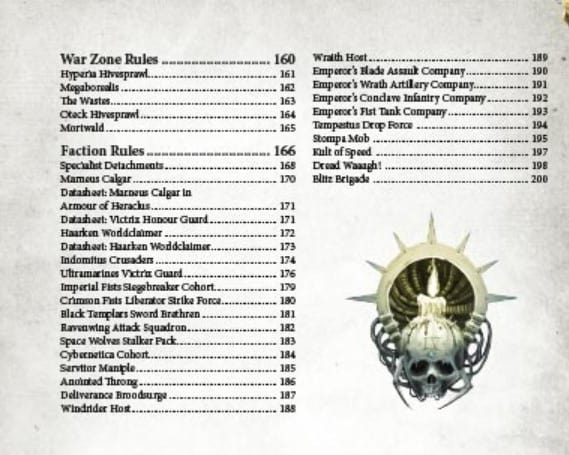 GW posted the table of contents for the new Vigilus Defiant, and some factions are for sure lacking, like Chaos and Necrons for instance.

Does that mean a sequel book is already in the works for the rest of the 40k lineup?

A quick note on how the new Detachments work from Vigilus, and some pointers on Traits, Psychics, Relics and the faux warlord generic Stratagem that we had already seen previewed: 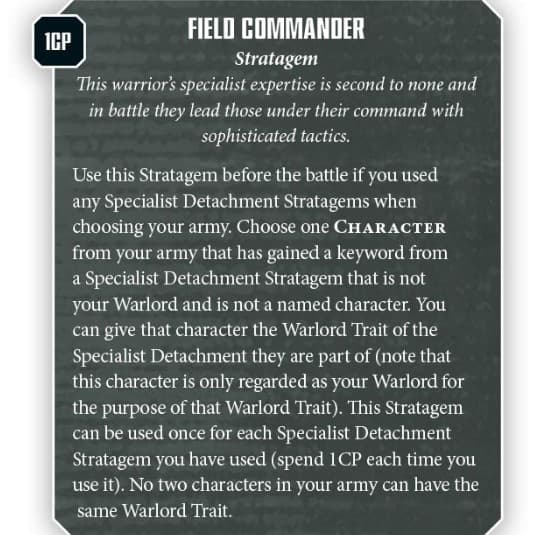 Save your CP’s as it looks like it is possible to retain your normal codex warlord trait, and give another character the detachment one as well. 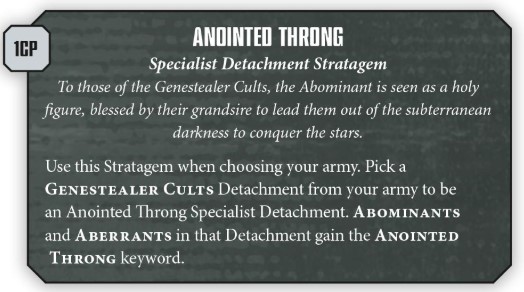 As we’ve said before, the specialist detachments only affect certain units. In this case, Abominants and Aberrants gain the Anointed Throng keyword. But what does it do for them?

This Specialist Detachment unlocks a number of useful tricks, including a Warlord Trait that adds 1 to charge rolls for nearby Anointed Throng units, and the Blessed Sledgehammer relic that improves your Abominant’s weapon to a tank-busting AP of -4. 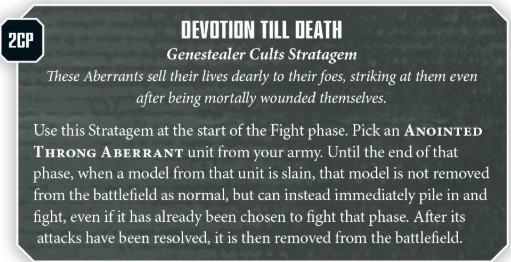 You’d want to use this stratagem when you decide to chest bump a Knight with a full squad of Aberrants. This is basically Only in Death does Duty End for an entire unit of Aberrants. Keep in mind that the Aberrants can take power sledges which are literal thunder hammers. Translation: You’ll be able to tear something up.

Here are the two Detachments and new Stratagems Genestealer Cults players  now have access to: 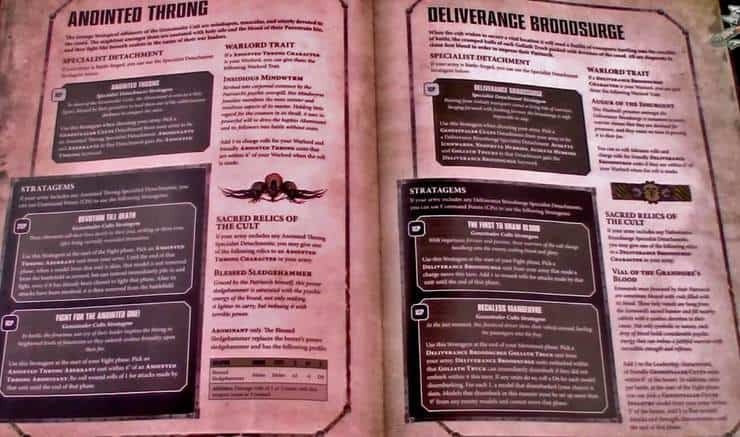 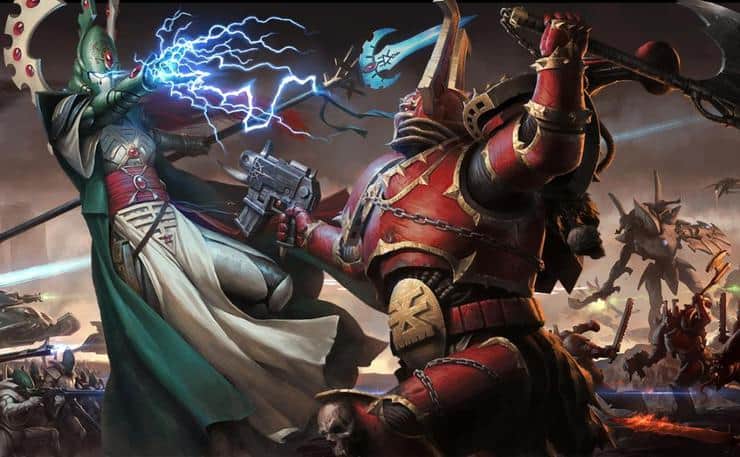 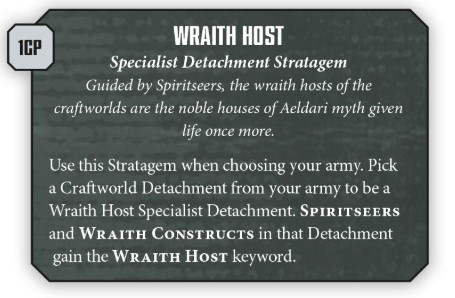 1Pp gives the Spiritseers and Wraith Constructs in a detachment the Wraith Host Keyword and it looks like the detachment unlocks access to a new Warlord Trait called Revered by the Dead.

Not only can your Constructs re-roll failed charge rolls, but for just 1CP, you can add 1 to the attacks of every model in the unit. 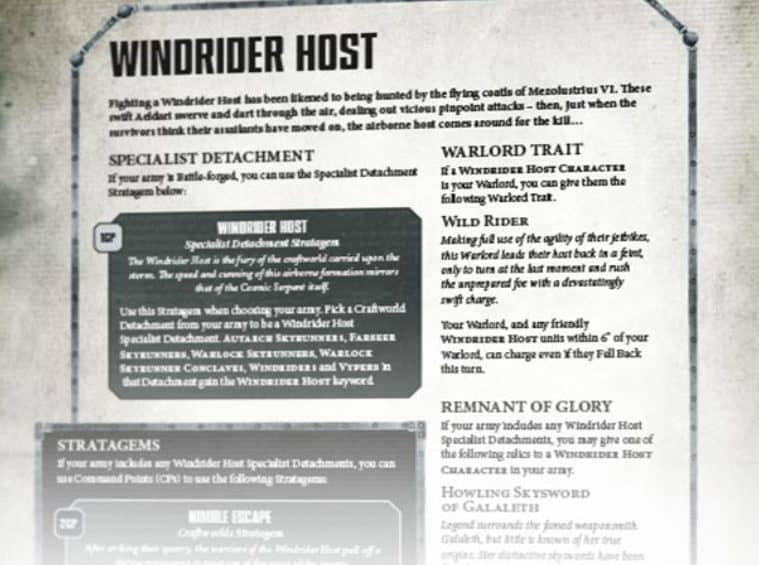 Eldar are getting the Windrider Host formation for just 1CP. This unlocks the Wild Rider Warlord Trait. Unfortunately, we can’t see what else the formation will be getting.

Here are both new detachments: 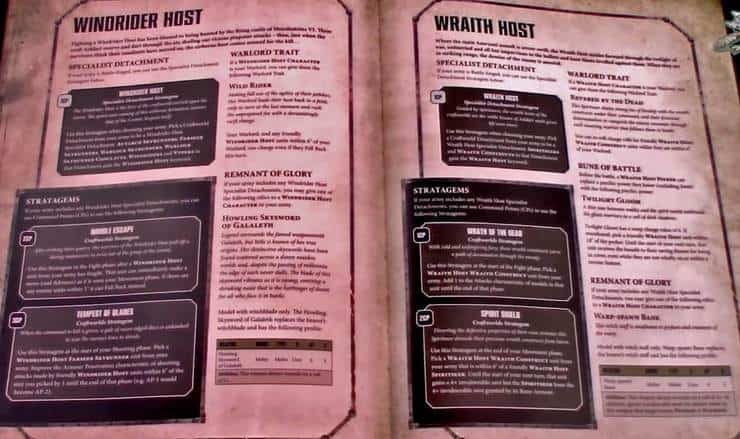 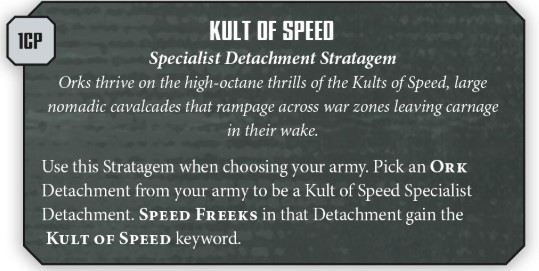 You now have another stratagem to throw on all of those newfangled Speed Freeks models that just dropped!

Unsurprisingly, all of the associated rules benefit your adrenaline-fuelled Speed Freeks, from a trait that renders Kult of Speed units within 12” of your Warlord immune to Morale tests provided they Advanced (that’s your Warbikers sorted!)

There’s also a 2CP stratagem on the way that allows a unit to double its movement. That’s upwards in the 20+” threat range. 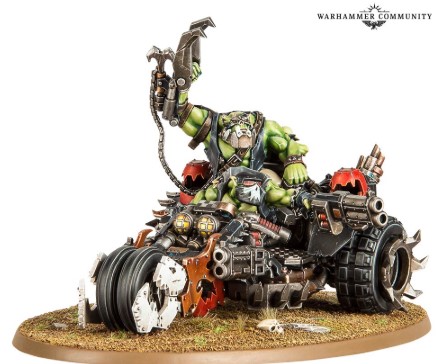 You can turn your Deffkilla Wartrike into Skargim’s Snazztrike as a relic. This just gives it +1 toughness and a 5++ save.

Ork players are getting a grand total of four specialist detachments in Vigilus: 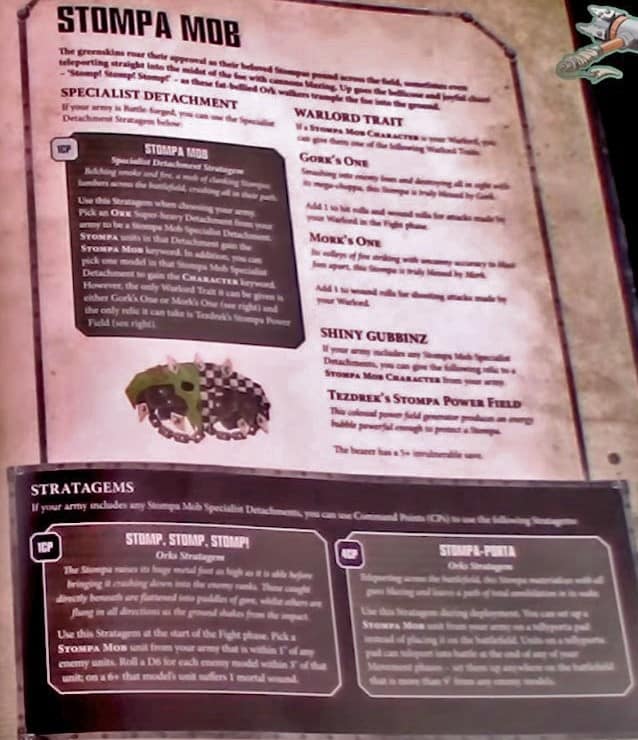 This is the first time we’ve seen a faction get more than one formation. Orks have already had one of their other formations called the Blitz Brigade previewed first. With that being said, if you see a formation for your faction that doesn’t sit well with you, there’s probably more for you to pick from!

We can’t see what the formation gives the Orks besides their Shiny Gubbin and boy is it a Gubbin to behold. 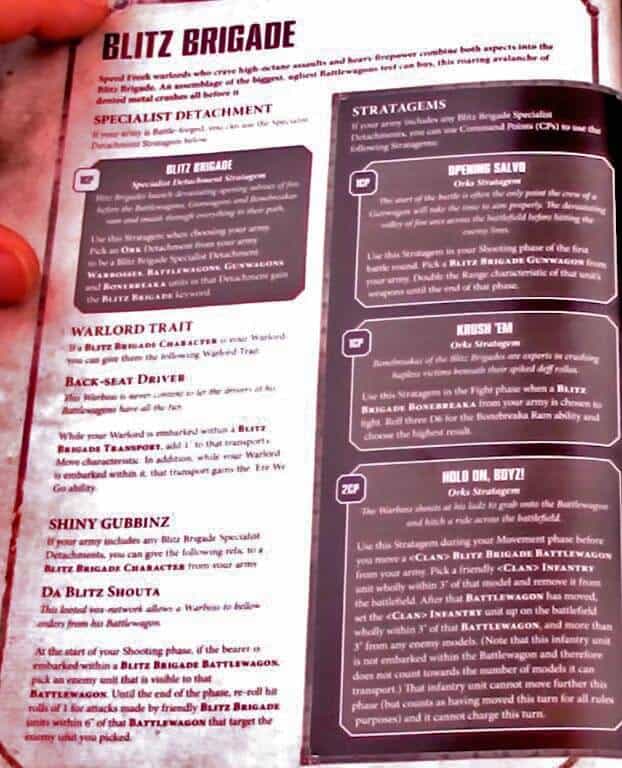 The cost is up in the air for right now. It could be anywhere from 1-3Cp as the pictures are so blurry. However, it looks like spending the CP only gives a certain detachment a keyword. Which in turn, obviously gives you access to restricted warlord traits, relics, and stratagems. 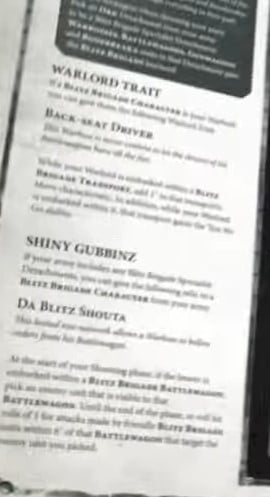 Right off the bat, this seems perfect for an Evil Sunz list as a Speed Freeks Blitz Brigade units can move a whopping +2″ and reroll charge rolls. Let’s check out the special relic next. 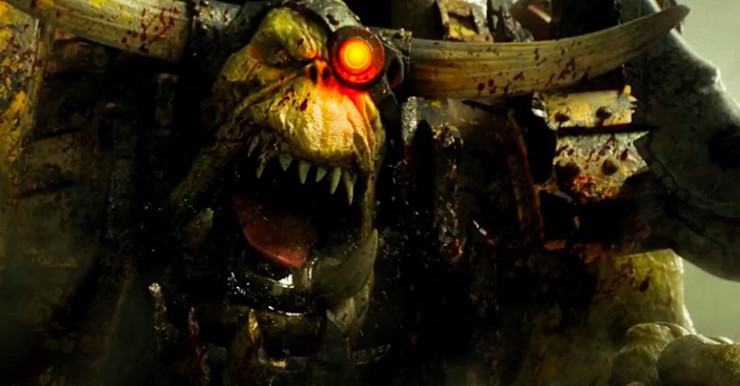 If the relic wielder is in a Blitz Brigade Battlewagon at the start of your shooting phase, you can pick an enemy unit that is visible to the character. Until the end of the phase, reroll all hit rolls of 1 for attacks made by friendly Blitz Brigade units with 6″ that target the enemy you selected. 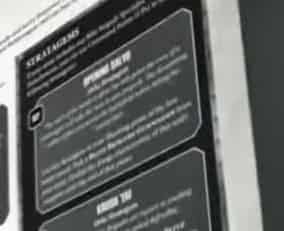 1CP – Opening Salvo – Use this stratagem in your shooting phase in the first battle round. Select a friendly Blitz Brigade Gunwagon. You can double the range of all of its shooting attacks until the end of the phase.

Opening Salvo is perfect for getting that extra bit of reach on a unit you need to cripple turn one.

1CP – CRUSH YA! – Use this stratagem when a Blitz Brigade Bonecrusha unit from your army is chosen to fight. You can roll an additional D6 when using the unit’s ram ability and take the highest result.

The infantry unit cannot move further this phase and counts as having moved this turn for all rules purposes and it cannot charge this turn.

While not every Xenos faction will be in Vigilus, there’s plenty of support coming to the ones that are. We’re sure GW will give the factions (Tau & Necrons) some kind of detachment rules somewhere down the line.

What are your thoughts on these new special detachments? Do you think they’ll have a place in the competitive meta? 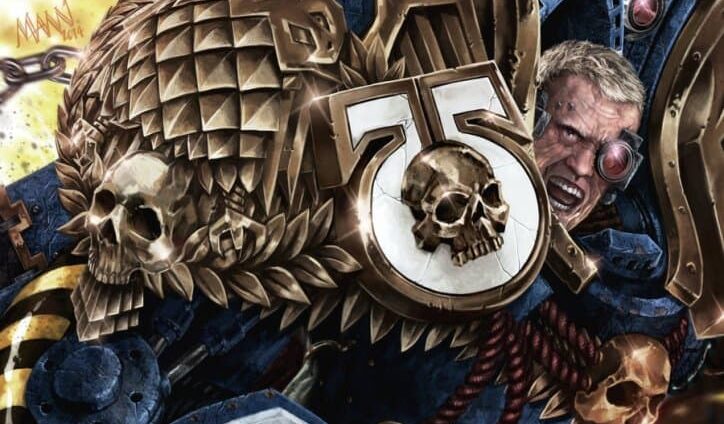 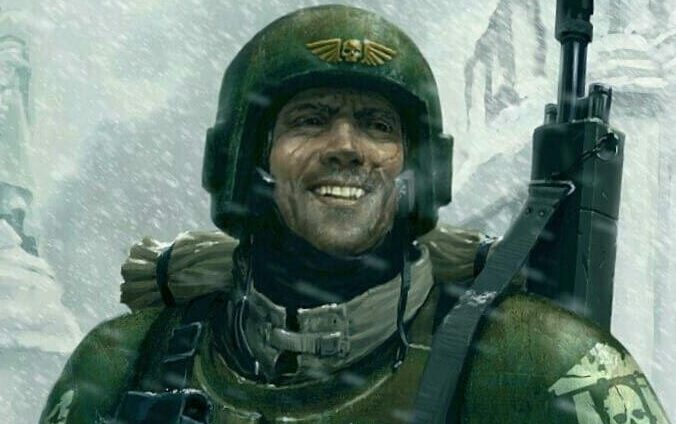 NEXT ARTICLE
BREAKING: 40k Imperium Vigilus Formation Detachments Revealed »
If you buy something from a link on our site, we may earn a commision. See our ethics statement.