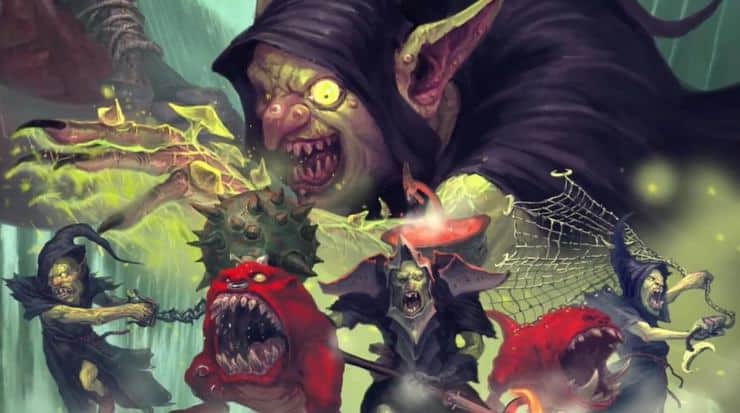 Two Nightvault warbands are included in the Gloomspite Gitz Battletome. Don’t miss all the new Warscrolls and points costs that were spotted!

The Warbands, Mollog’s Mob and Zarbag’s Gitz in Nightvault are getting their own rules in AoS for Gloomspite Gitz.

These Warbands were originally introduced for Nightvault, the turn-based board game set in the Age of Sigmar. However, GW printed rules versions for AoS directly into the Gloomspite Gitz battletome this time around! The best part is, they don’t look half bad.

Check out what was spotted on Imgur. 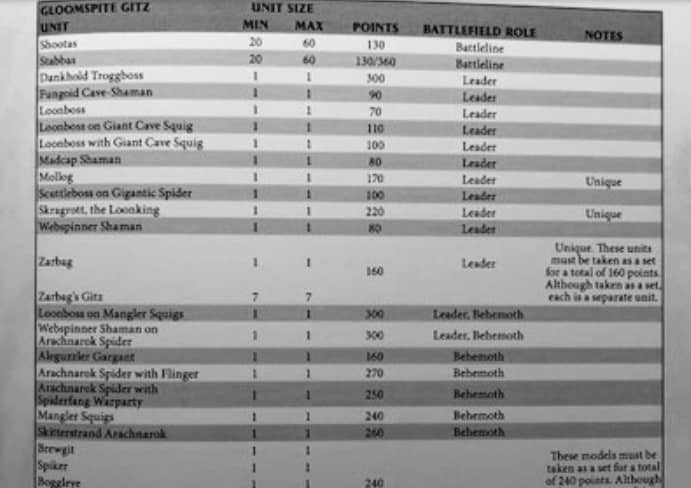 Above you can see the points for the Warhammer Underworlds Warbands, as well as the new Boss Trogg, and Manglers. 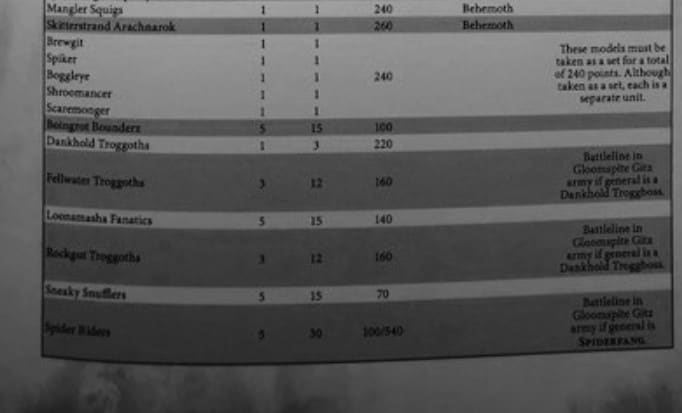 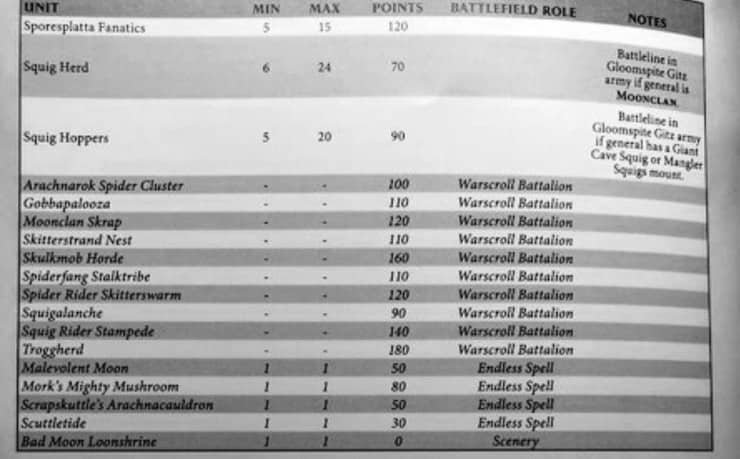 From the looks of it, there are several pages of points costs for the Gloomspite Gitz. Make sure you read through and look for the things you were planning on taking. 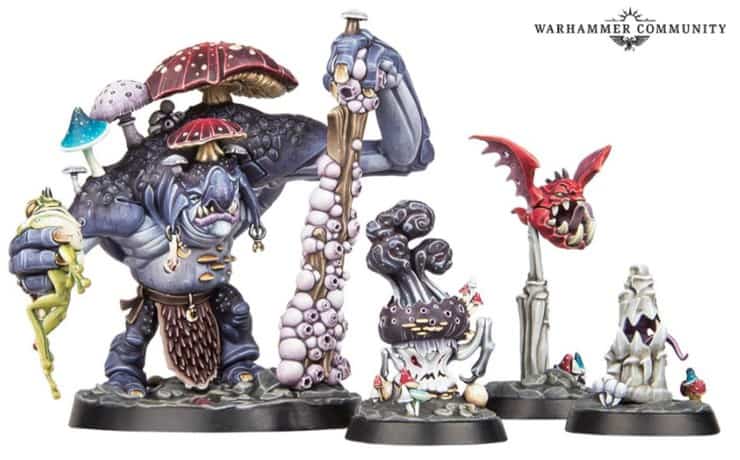 Mollog has rules for days. His entourage of followers that fight with him give all kinds of different effects.

Essentially, Mollog is a mortal wound engine (Yes, his club just does D3 mortal wounds),  he can also give -1 to hit effects to the enemy with his Jabbertoad in his hand as well as the Spiteshroom that follows him around.

Loyal to the End gives him more survivability by being able to pass wounds off to his minions.

Just like some of the newer Troggoths, he can also ignore a Spell’s effects on a 4+ thanks to his Magical Resistance. 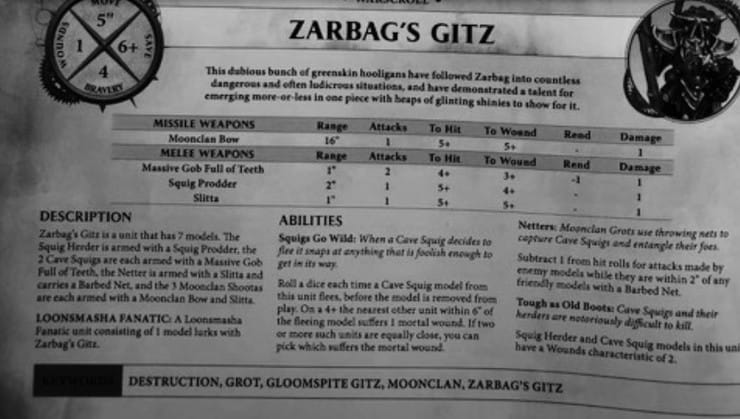 Zarbag’s Gitz on the tabletop act as a unit of seven models. All of the models have something to offer in the unit to make them work like a well-oiled machine. The real workhorse in the unit is the Loonmasha Fanatic and the Netters, as all of the other guys are essentially wound sponges. This unit basically acts like a multi-wound, tricked out Fanatic. For 160 points the unit may be on the cheaper side of things.

Now let’s take a look at the leader of the Warband: 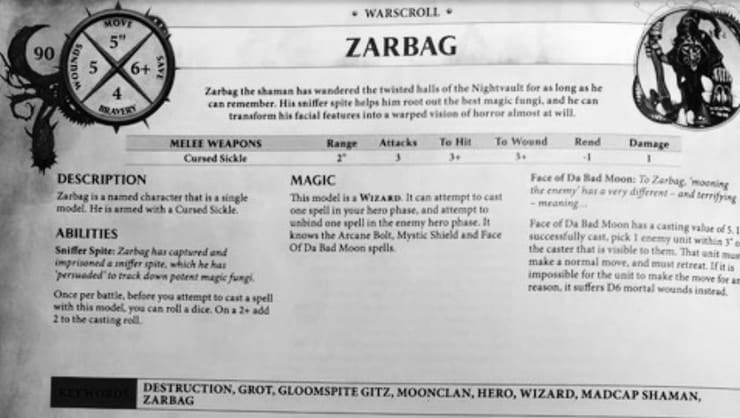 Zarbag is a Wizard that has a brutal spell called Face of Da Bad Moon. This spell goes off on a 5 and forces an enemy unit within 3″ to make a normal move and must retreat. If they can’t, they suffer D6 mortal wounds.

If you REALLY need something to go off, you can use his Sniffer Spite to give him a +2 to the casting roll of a spell. 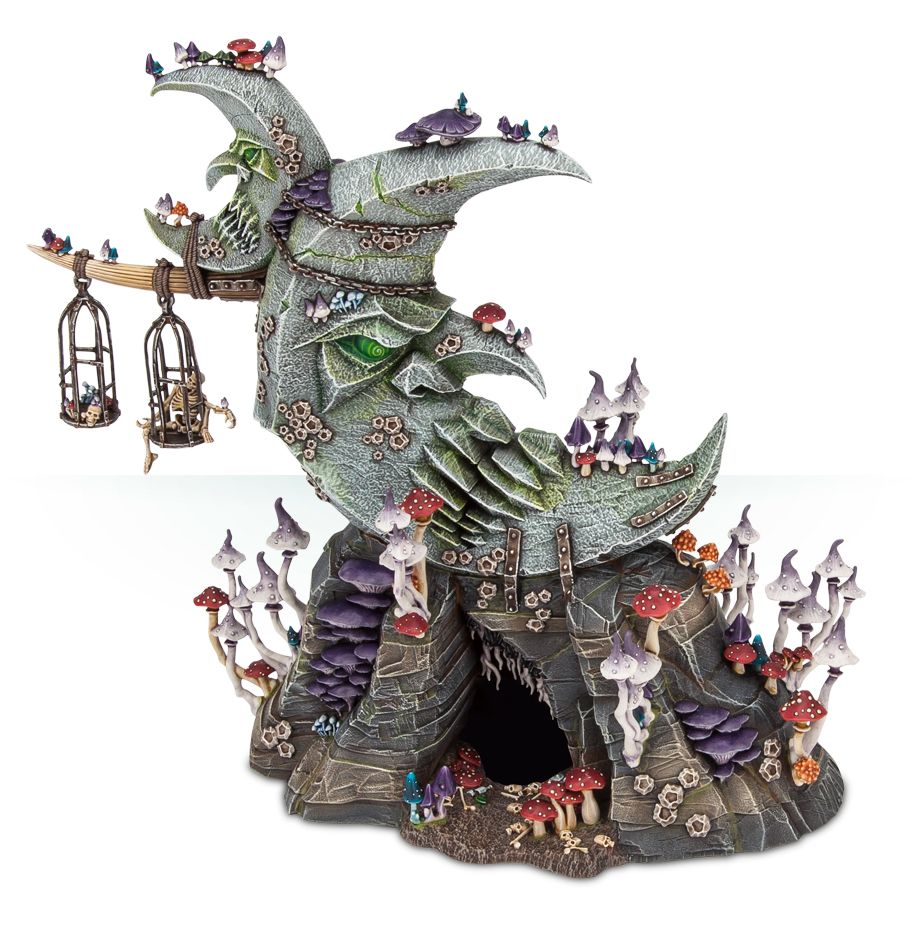 The Loonshrine gives off a fearless aura making everything within 12″ immune to battleshock. That’s a big deal when you’re running massive blob squads of guys in T-shirts. 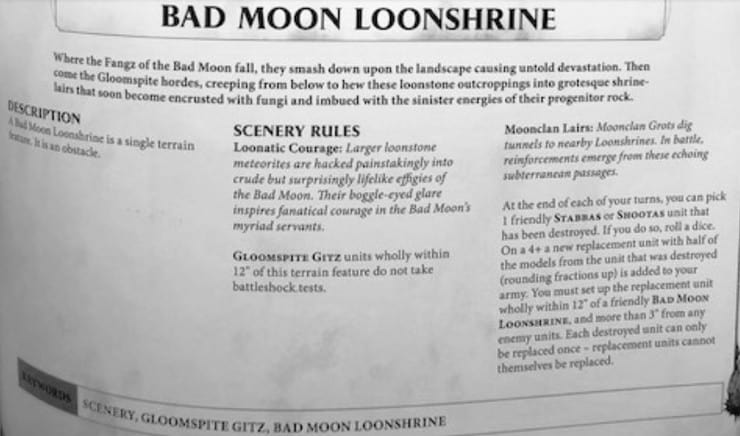 It also lets you replace a unit of Stabbas or Shootas at half strength from what it was initially. Remember, you can take those units in squads of 60 each. That means you can get 30 back for free. However, you can only replace the same unit once. (i.e you can’t go from 60 to 30 and then from 30 to 15).

It’ll take some playtesting to see what the most beneficial squad size is for the Stabbas and Shootas now that we know the Loonshrine gives off a crazy effect like that.

More and more previews are sprouting up from the internet as we get close to the Gloomspite Gitz full release. What do you think of the points cost of everything? Which Warscroll Battalion rules would you like to see more of? 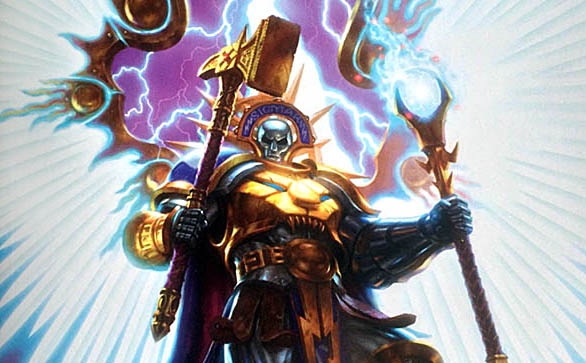 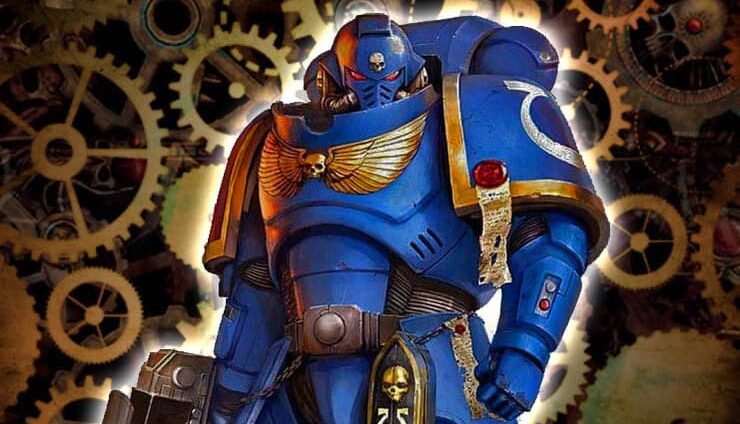 NEXT ARTICLE
23 GW New Release Rumor Engines to Solve in 2019 »
If you buy something from a link on our site, we may earn a commision. See our ethics statement.