50% Off All Pathfinder Books & PDFs at Frog God Games! 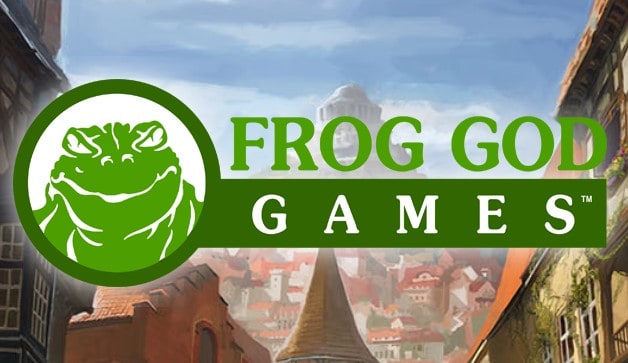 Save big on some of the best Pathfinder RPG Supplements on the market today with this 50% off sale from Frog God Games. Don’t miss it!

Frog God Games is a great place to score some one of a kind RPG supplements for you and your gaming group and now you can get them even cheaper. Let’s take a look: 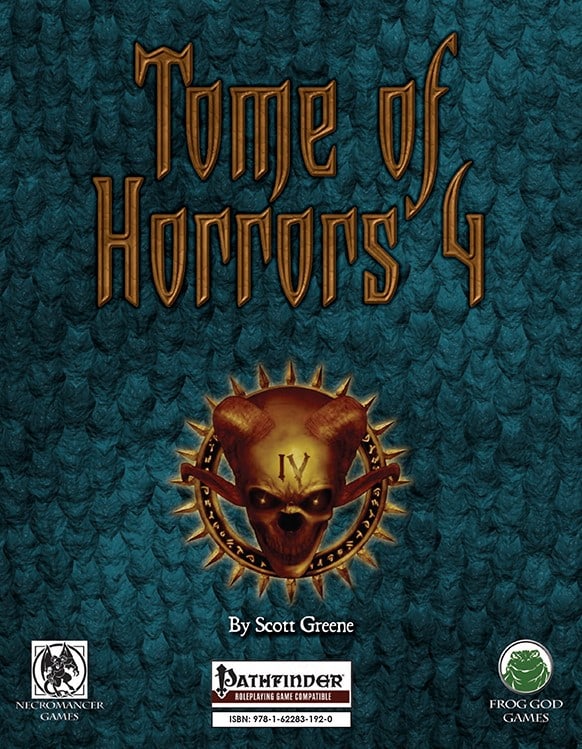 This massive tome of never before seen monsters is done in our characteristic textbook bound hardcover style, but this time in full color! Featuring over 300 new monsters from our design team led by Scott Greene and illustrated by Chris McFann, it provides new fiends to terrorize your players with for years to come. Both Swords & Wizardry and Pathfinder versions available. 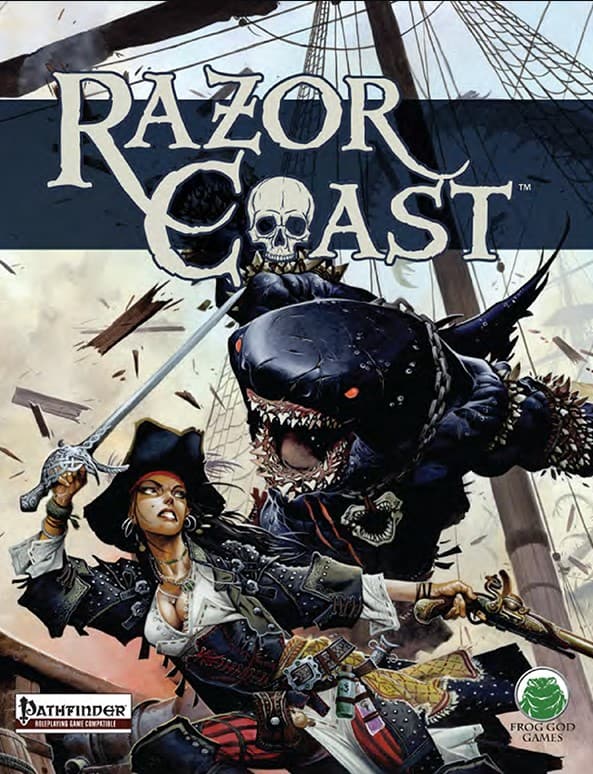 Under the heat of the salted sun, along a pirate-riddled coast bloated fat with forgotten riches and forbidden secrets, the subjugation of the native tribes awakens long banished horrors. Horrors whose deadly plans threaten not only Port Shaw—the corrupt fingerhold of a distant and decadent civilization—but existence, itself. A sea of blood caresses the savage shore of the Razor. Rising from the abyssal depths, Harthagoa, the bastard spawn of a She-Kraken and Demogorgon drags whole fleets beneath the waves. In the fetid Blacksink Marsh, unspeakable horrors lurk beneath the bog water, accursed cannibals pay gory obeisance to an ancient shark god of slaughter—begging its return. A ghostly armada, murderous pirates, and balesharks prowl the waves—all threaten Port Shaw, the only bastion of “civilization” on the Razor. The city hosts foreign invaders chasing baleen, ambergris, and gold. They menace the native Tulita tribes and drive them from their ancestral home with smoke-belching cannonade. Pele, The Goddess of Fire and Wrack, watches from her smoldering throne on Dreadsmoke Mountain. She stands ever ready to purge the people of Port Shaw from her domain in a torrent of ash and molten lava. 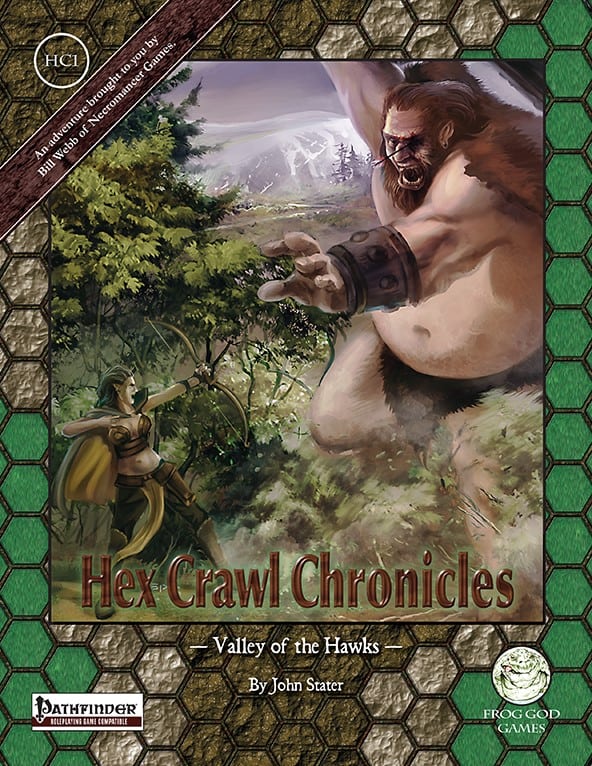 When the game was invented and sold in a little woodgrain box, the author told us a required supplement was an Avalon Hill game called Outdoor Survival. This was a wilderness survival game that consisted of a hexagonal map system that players would travel around, trying to find their way back to civilization, all the while trying not to die of thirst or get eaten by bears. This game map was used as the first wilderness “hex-crawl” for what eventually became D&D. Later, Judges Guild took this to a whole new level with the Wilderlands series. For many years, hex crawling was just the way the game was played. This series brings that back, or supplements existing games that use that system of travel.

These books provide a sub-setting in your own campaign world. They populate the world, and allow you to let your players explore that world, rather than just “travel 20 days” to the dungeon. Written by John Stater of NOD fame, each of these supplements details an area with a specific theme. Monster and NPC statistics are provided for each encounter area detailed.

The Valley of Hawks is a wooded river valley that cuts across a verdant prairie. It is named for the giant specimen of hawks that hunt along its banks and, during the Spring, blacken its skies. In the days of myth and legend, the Valley of the Hawks was inhabited by a race of giants who carved their likenesses in stone and hunted monstrous creatures using the giant hawks as their ardent companions and helpers. In the shadow of the giants dwelled the trouping elves and their erstwhile goblin enemies, fighting and feasting and making sport of life. The coming of the golden men from the west sent the proud elves and vicious goblins into hiding, for they commanded powerful magics and built a grand city of metal and crystal. But the reach of the golden men exceeded their grasp, and within a few generations their city had fallen and sent its children into the valley as orphans, and the elves and goblins worked their vengeance on them until only a few bands of the golden men, as wild and savage as the beasts, still roam the Valley. And so our adventurers arrive in the Valley of the Hawks seeking fame and fortune. Perhaps they come from northern lands or southern lands or perhaps they were born in the Valley and seek to learn its secrets and use its wealth to found a new city in the manner of the long gone golden men, a city that shines and terrifies and engraves their names forever in the stories of elves and men.

When the northern men came into this land they thought they had discovered a place of limitless possibilities – sparkling streams, fertile valleys and endless acres of rich timber. They didn’t realize they would have to contend with giant beasts, rapacious lycanthropes and the mysterious black arcs that visited the land from beyond the Black Water. Strike out into this land of dire wolves and giant badgers – bring news and trade to the isolated colonies of the northern men or fight through the lands of the wolfmen to find the palace of the mythical Queen of the Winter Wind.

Among the reasons many adventurers choose to end their days in the cannibal-ridden, hurricane-savaged isles of the south is the immense distance it puts between them and the terrible land beyond the Black Water. The Black Water is a great inland sea filled with black, viscous water that sits as still as death. Nobody but a fool would willingly cross the Black Water, save for the strange men who sail the black arks, but many fools have crossed those waters in search of a lost love or a secret taken to the grave, for beyond the Black Water and its grey shores lies the icy Land of the Dead.

For millennia the men of the north were pitted against one another in ceaseless battle, one city-state against another. In due time, the men of Yal-Garok gained the upper hand, dominating the minor city-states through arranged marriages and then striking at its greatest rivals militarily and forcing them to sue for peace. The rise of Yal-Garok ushered in the Age of Peace, allowing the clever, hard-working Northmen to focus their energies are building rather than destroying one another. Most of the country was brought under cultivation, towns and cities flourished and colonies were established in the eastern mountains, the western prairie and, unsuccessfully, the icy woodlands of the far north.

In ancient times the Pirate Coast was home to a great civilization of stone giants. The stone giants maintained a wide-reaching kingdom of towns and villages. Despite their great size and power they relied on slaves taken from the primitive human tribes of the coast. In time, the stone giants grew lazy and decadent, and when humanoids poured into the coastal lands and gradually destroyed the stone giant kingdom. The stone giants were more powerful than the humanoids, but they were more numerous and they outbred the giants. Worse yet, the stone giants found themselves plagued by slave revolts. The humans of the coast founded their own kingdom on the island to the east of the coast and came to be called the Bucranians by the bull skulls they used as standards. More than a century ago, the roving pirates of the White Island discovered the wealth of the Bucranians and began raiding their villages and towns. When the White Islands sank, many settled along the Pirate Coast and started making deeper and deeper raids into Bucrania, burning villages and carting away slaves from the old and lethargic kingdom.

Next to a little rock formation on the Great River generations of adventurers and the folk who serve them have established an outpost on the verge of the Troll Hills. Hidden in those rocky promontories are every breed of troll known to man and giants besides, remnants of the creation of the world with a mind to keep their secrets and their treasures to themselves. Screw up your courage and make a foray against the big folk!

In a windswept valley of scrub and sand there is a pleasant meadow fed by a bubbling spring. Here the wandering folk have made their home, a fort of adobe under the blazing sun. From this place in the middle of nowhere one might join the prospectors in the mountains searching for silver, race against the mountain men in their search for the fabled Caverns of the Old Ones or just explore the many secrets and dangers hiding beneath the burning sands.

Don’t miss these great deals on an unlimited amount of game adventures Make sure you visit FGG and secure yours today! 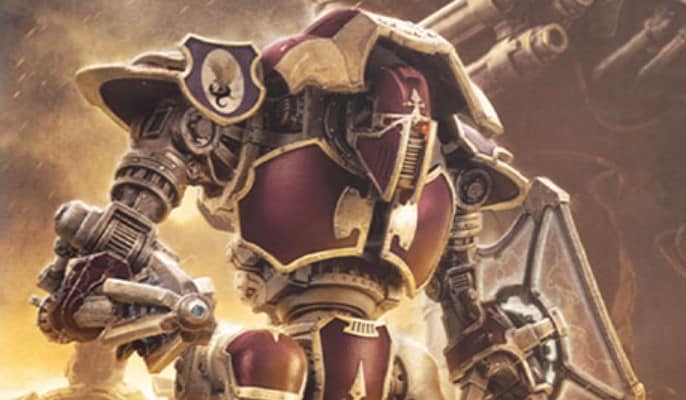 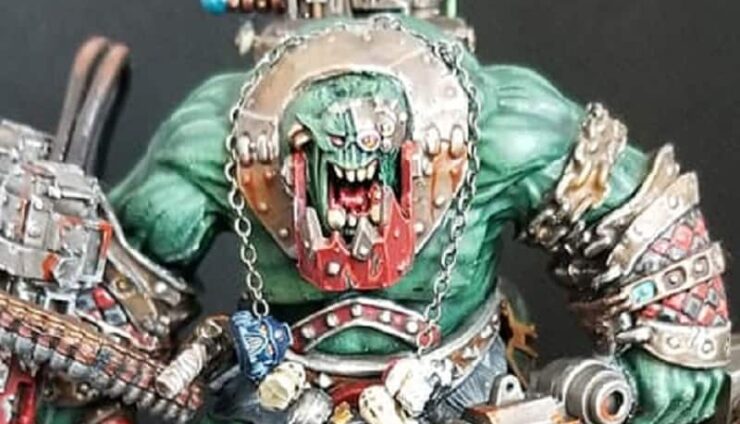 NEXT ARTICLE
Da Really Big Choopa: Ork Army of One »
If you buy something from a link on our site, we may earn a commision. See our ethics statement.