Imperial Shoretroopers & Dewback Riders are next for Star Wars Legion! Find out more on new releases that are on the way soon!

Get yours for less at Miniature Market 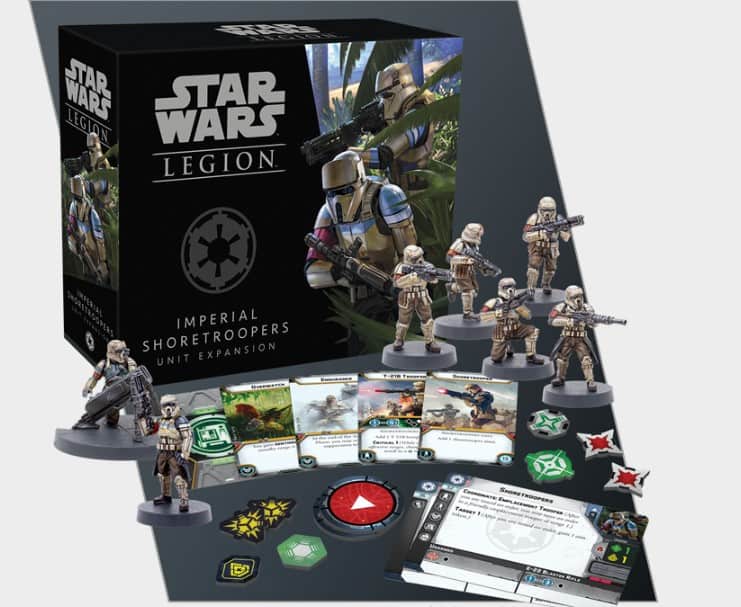 Specially trained to comb beaches and bunkers for any sign of Rebel infiltration, Shoretroopers are often assigned to important bases where secrecy is of the utmost importance.

This expansion is coming with seven decked-out models with E-22 blasters, a T-21B targetting rile, and a DF-90 mortar. Like all other Legion expansions, these guys are coming with their own set of upgrade cards and all the tokens you need to play them.

With these guys acting like sentries on the coasts of bases, they come with a lot of training. If you issue any orders to them, it’ll immediately put them on the offensive. On top of this, if you take the Trooper with the T-21B targeting rifle, you’ll be able to spot targets much more easily. 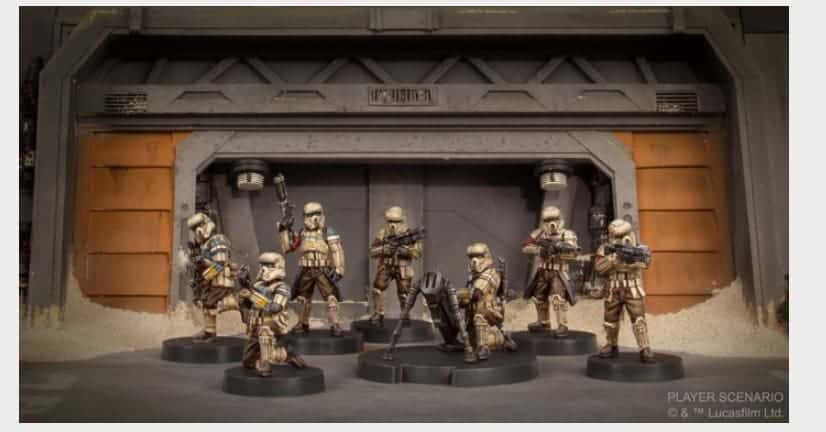 If you want to bring along heavy firepower that isn’t the run-in-the-mill E-Web heavy blaster, you can bring along the DF-90 mortar. You’ll be able to actually deploy him separately and he can lend some covering fire to any unit. But he can only be deployed if you have an entire unit of Shoretroopers in your list to begin with so just keep that in mind.

Get yours for less at Miniature Market 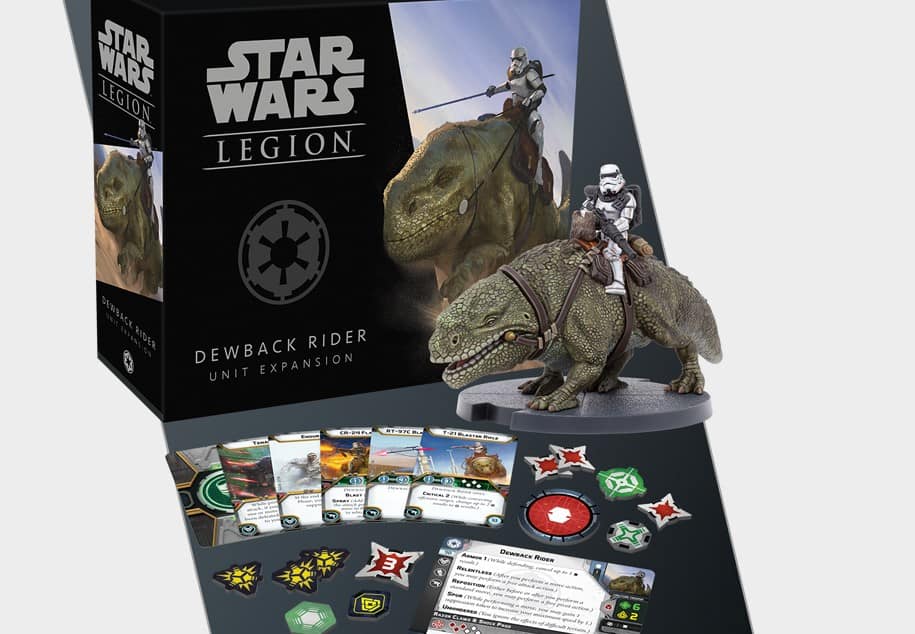 With Fantasy Flight Games releasing two things for the side of the Empire, here are the Dewback Riders!

From towering AT-STs to legions of Stormtroopers, the Empire can display its dominance in any number of ways, and the hulking Dewback is yet another method of reminding local populations who is truly in control.

The Dewbacks are lizards native to Tatooine. They’ve got thick skin to protect against the twin suns. But that skin also just so happens to help against blaster fire as well.

The Dewback isn’t just good at absorbing blaster fire. He’s also a giant lizard with some nasty claws. If you close the distance with this guy, he’ll be able to thrash an enemy unit to bits. Closing the distance is the only tricky part.

Now for the rider, he’s got three weapon options to choose from. He’s got the t-21 blaster rifle for all around effectiveness, the RT-97C blaster rifle for long-range support, and a CR-24 flame rifle that’s especially deadly at close range and can flush enemies out of cover. 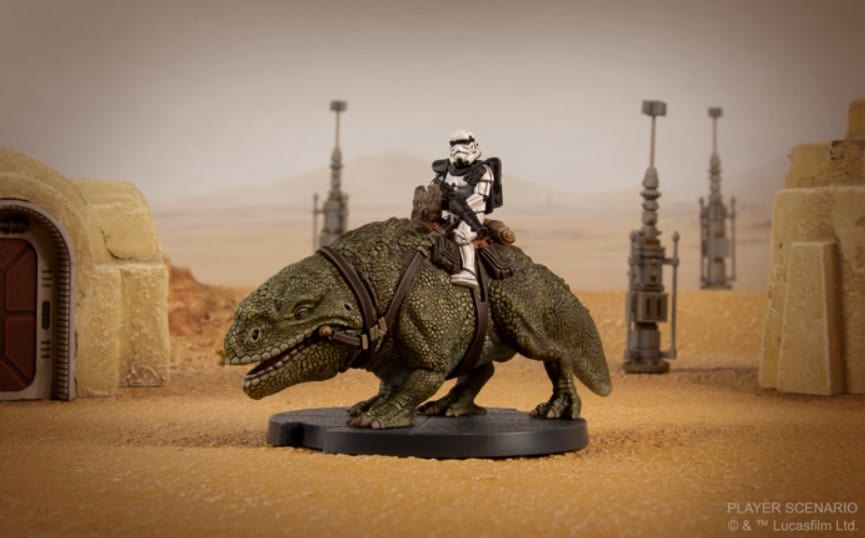 If you do manage to get into close combat with this guy, the Sandtrooper can zap him with a shock prod to make the Dewback’s melee attacks hit even harder.

The Dewback is going to be a big lumbering target but definitely a useful support platform. You can either get in close with a flamer and the Dewback’s claws or stay at-range and protect your backfield.

Look for the Shoretroopers and Dewback Riders expansion to hit the shelves in the second quarter of 2019.

What expansion will you be picking up? How many Dewbacks do you think you’ll be running? Will you be trying out an all-Shoretrooper list? Let us know in the comments of our Facebook Hobby Group. 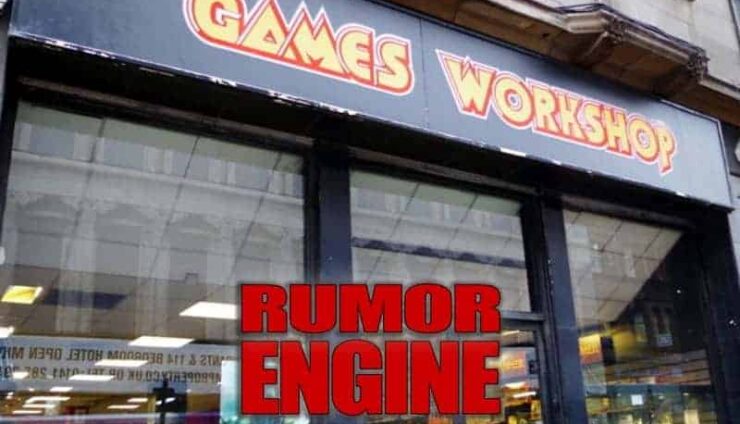 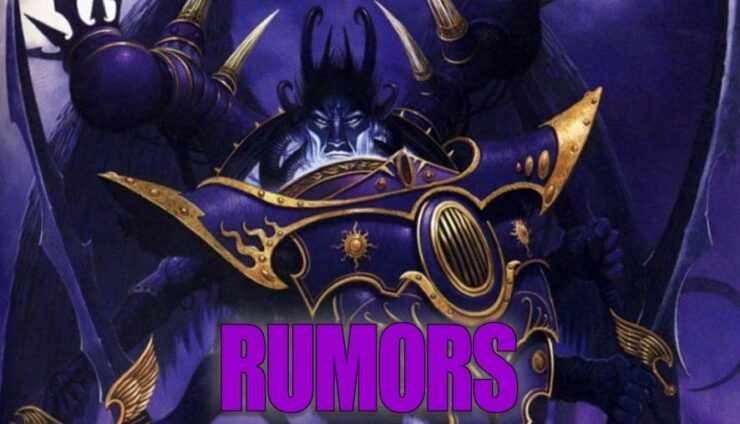 NEXT ARTICLE
Daemon Primarch Fulgrim & Emperor’s Children Next For Chaos? »
If you buy something from a link on our site, we may earn a commision. See our ethics statement.