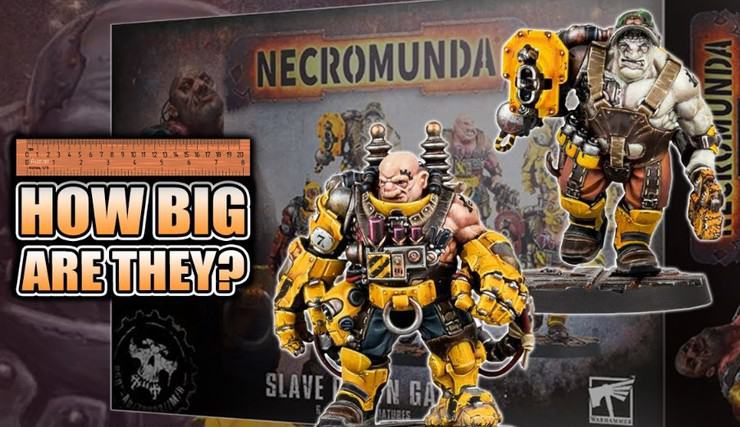 The biggest meanest abhumans to grace the Underhive have arrived! Check out Rob’s Necromunda Ogryn gang unboxing to see the goodness.

This week we are cracking open the new Ogryn set and seeing what it takes to get them ready for the tabletop. Definitely some hits and misses with the very modular set.

We are going to show you everything including the sprues, bits, and of course the size comparisons.  That way you can decide if this box is worth your hard-earned hobby dollars. Let’s go!

Get Yours For Less From Amazon or Dicehead Games! 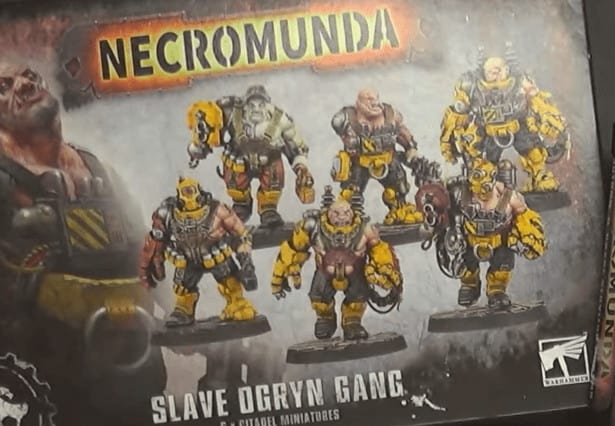 The box of six Ogryns is going to run you 80$ from GW. It’s the same sprue three times and with a very modular setup. 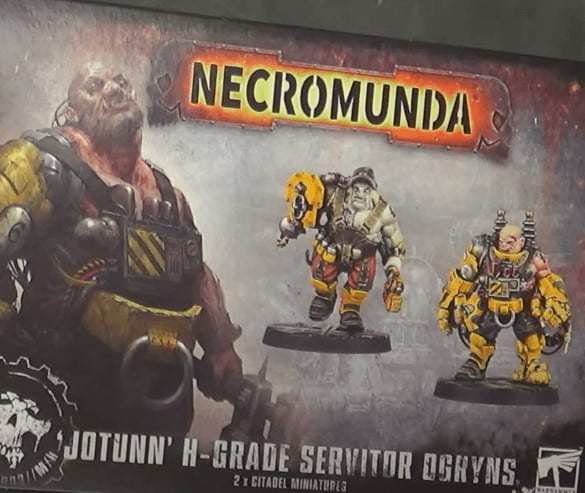 The box of two Ogryns doesn’t quite add up math wise. It’s $40 for two guys. Might as well get the six-man box and get the two extra guys for the same price. It’s the same sprue as well, so not really much reason to get the two-man box unless that’s all you can afford at the time. As a note, we’re going to be focusing on the six-man box for the video.

Initial Look At The Sprues, Bases, And Instructions 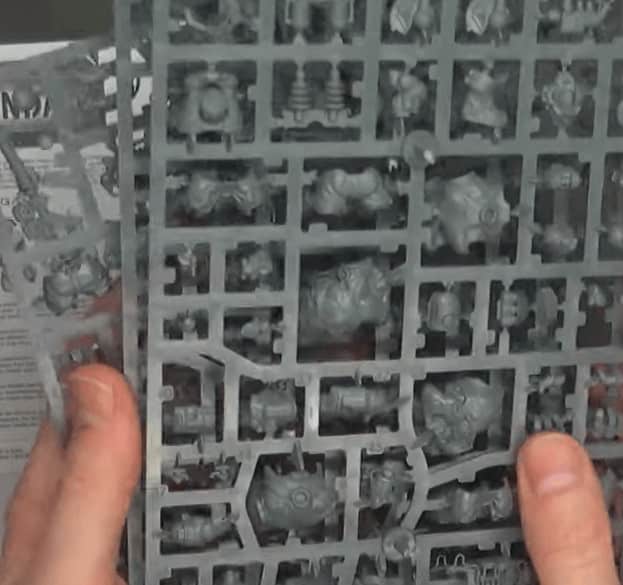 You get three identical sprues with the kit. Nothing too crazy to see here yet. Rob is excited to see if he can kitbash these with any of the Imperial Guard stuff. 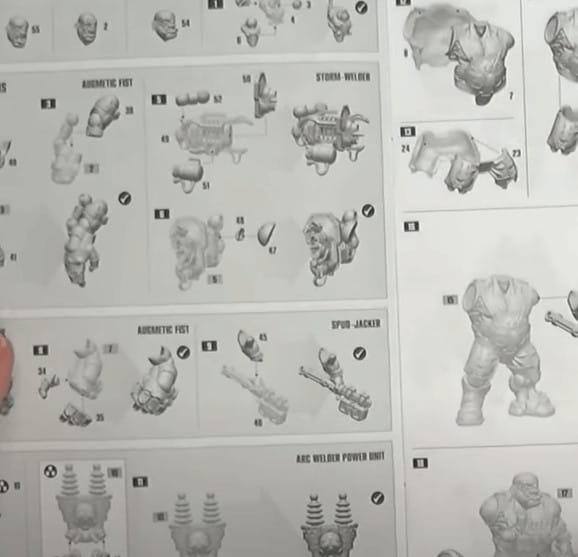 The instructions are pretty well laid out. Since there are a limited number of poses we hope it won’t be too hard to put together! 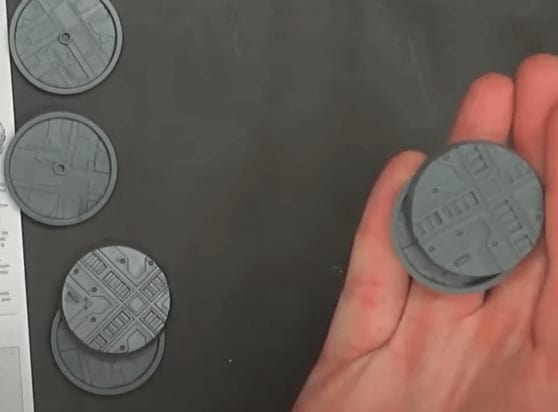 You get some really cool 40mm industrial size bases with the kit. A nice little bit of flavor over just regular bases.

Going Over The Manual 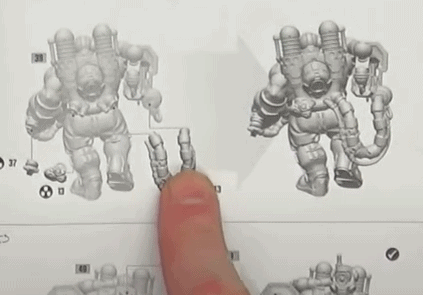 There a few spots like this in the box where you can customize the Ogryns. For instance here you can either leave the flamer open or attach it with the cable. 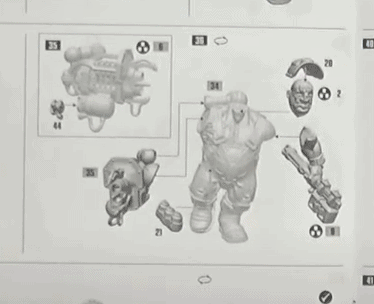 You have the option on most of the heads to leave the face open or cover it with something. 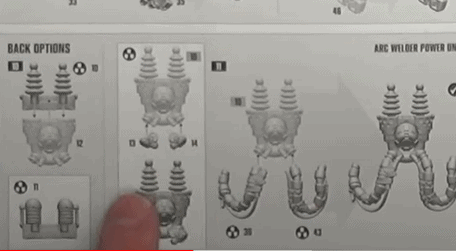 Another variation spot. Here you can either close off the pack with some gauges or add the hoses. There only look to be two initial poses that you build off, so all the customization will have to be done with weaponry and add-ons. Just something to keep in mind. 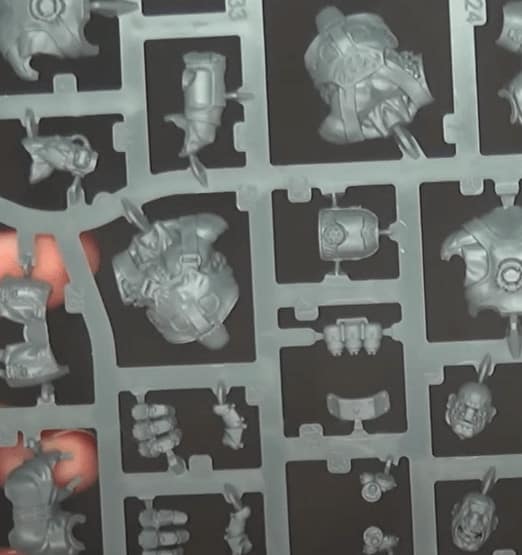 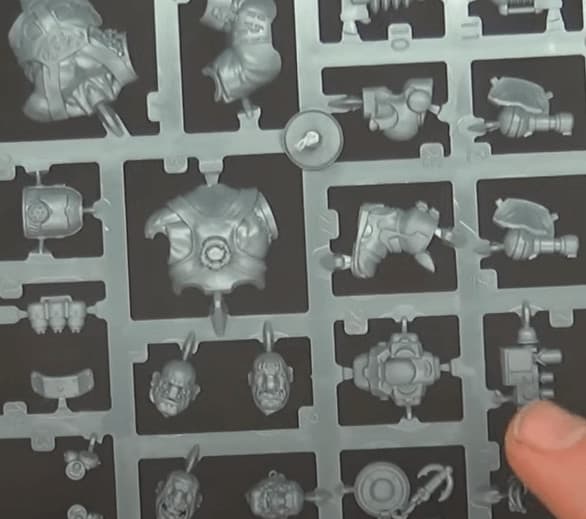 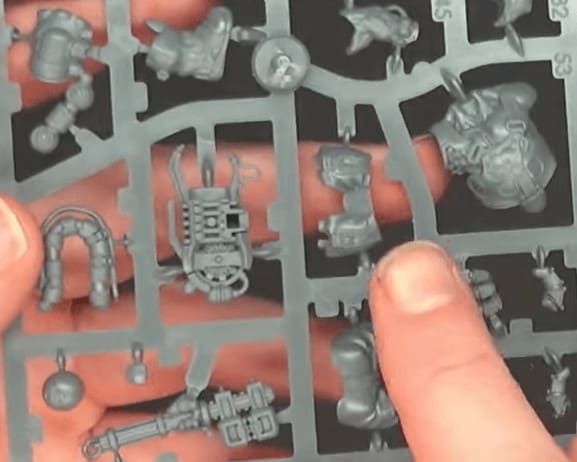 Everything you need is on one sprue! Makes it super easy to find stuff and know what’s going on. Each piece is super detailed and we hope they are easy to build! 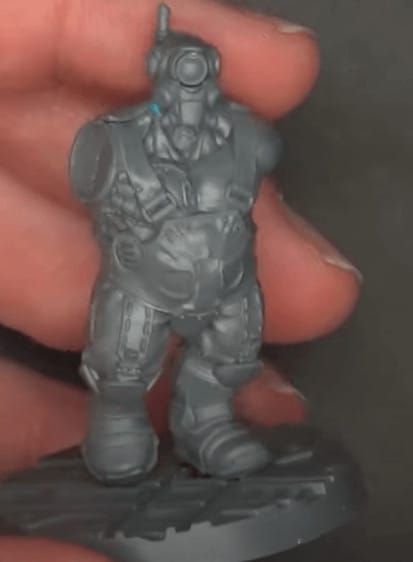 The bodies themselves are extremely modular and go together easily! The instructions do a great job of getting you to this stage. But you’ll see next, some issues do arise. 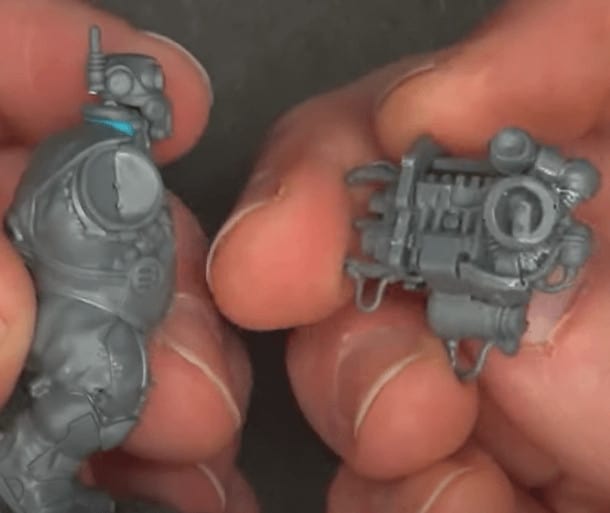 The Arc welder arm… was a disappointment. Rob spent some time but could not get it to fit right. The instructions really weren’t much of a help. If you want that weapon on the Ogryns, be ready for a bit of a hassle. 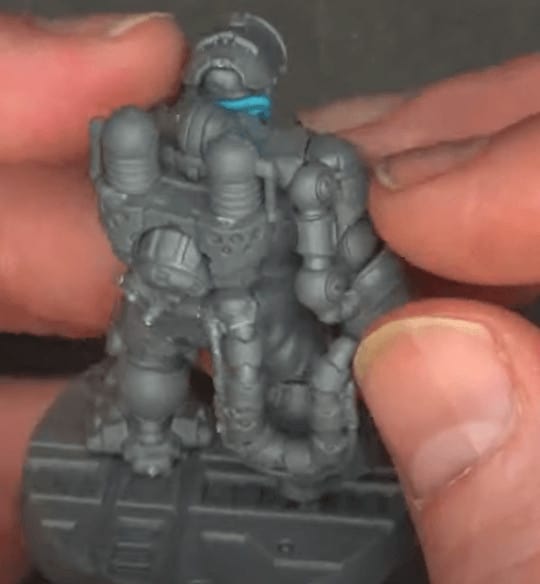 The guy with the backpack and Powerfist went together super easily and everything fit nicely! 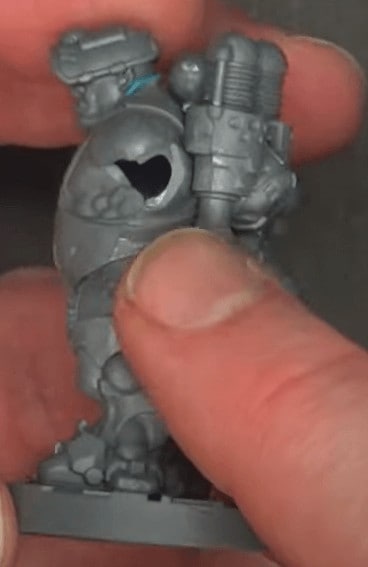 The right side wasn’t too bad since they were just pieces pushed on, the left arm though is a wide-open hole, so we’ll have to see how it goes. But it’s going to make adding 40k parts hard. 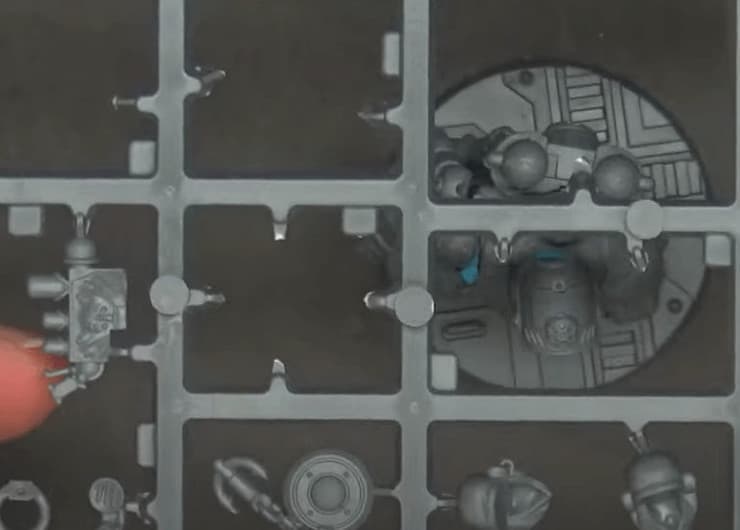 There aren’t a ton of extra bits here. Once you cut everything out that’s needed, not much is left, but it’s enough to make them modular for sure. 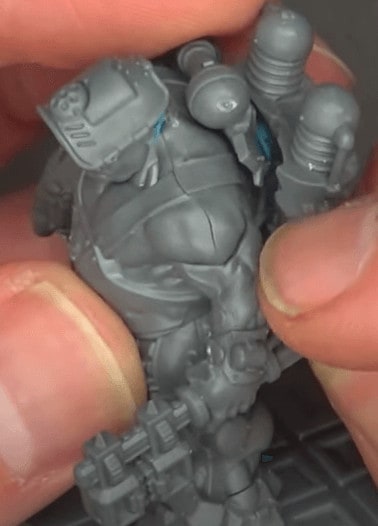 The arm goes in pretty easily, but it’s almost like they forgot to finish sculpting the muscles. Looks pretty good, just almost like something is missing because the bottom half is full of veins and detail. While the top half just doesn’t have the detail almost at all. 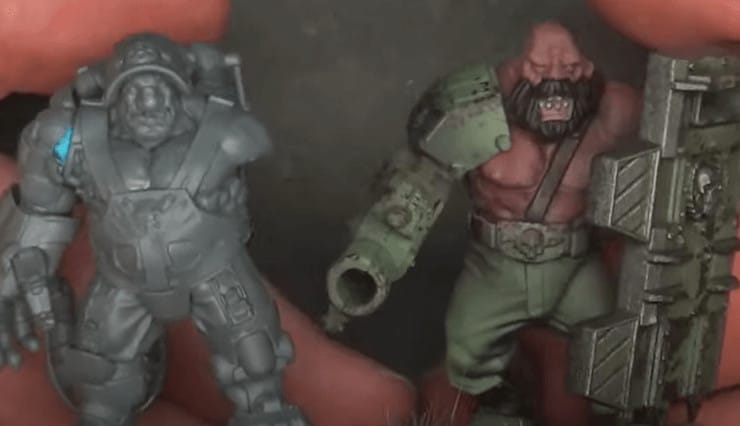 They stack up quite nicely with the 40k big boys at first glance. The heads though of the Necromunda ones are way smaller. The shoulders and musculatures are also sculpted differently, making conversions pretty tough. Just because of some of the strange sizes of the body it’s going to make for a hard conversion. A little disappointing, but still possible. Just know it’s not going to be super easy.

That does it for today. Overall, a pretty cool kit, but there are just some issues with sculpting that spring up throughout this modular kit. It’s really cool but just a couple of little issues you’ll need to work through. 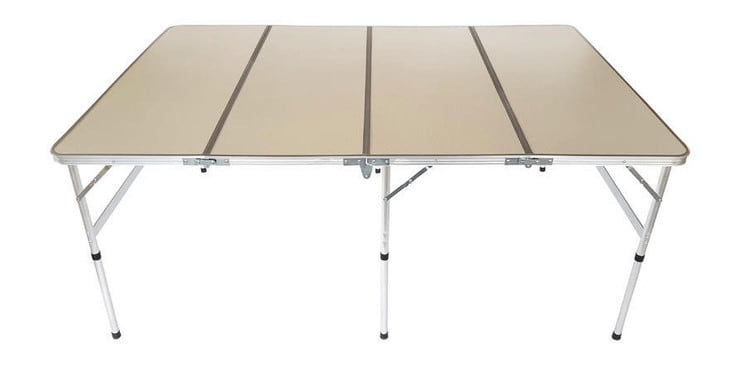 NEXT ARTICLE
Need A Solid Gaming Table For Home? Check These Out »
If you buy something from a link on our site, we may earn a commision. See our ethics statement.