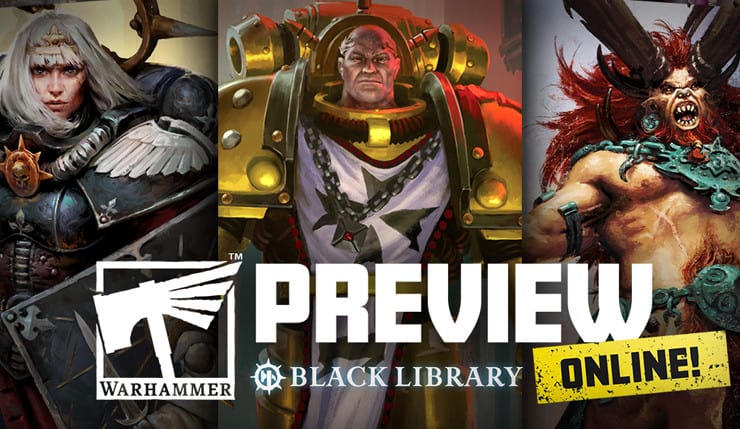 Another big online GW Preview for all things Warhammer has happened! Catch all the latest reveals from  Warhammer TV  and Warhammer Community along with our team’s commentary!

If you’re a fan of action-packed Warhammer fiction, then you’re in for a treat this weekend, as Black Library’s got a Warhammer Preview Online all to itself. As you might expect from an end-of-year special, you can look forward to oodles of exclusive reveals of upcoming books that will be arriving in 2022.

So much of these books and lore that you like are just that, what you like! So be sure to check out the full Warhammer Community post to read more in-depth about whichever of the books below peak your interest! There are also a few author Interviews if you have a favorite or two you’d like to hear directly from. 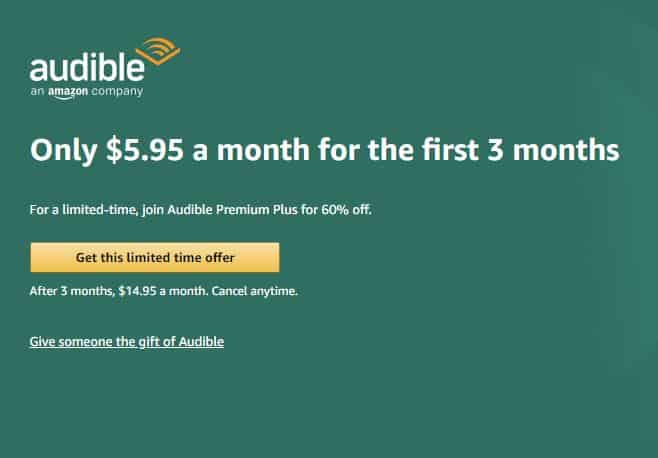 You can see this is quite the sweet deal if you want to listen to podcasts or books! Especially if you’re traveling, this is perfect to help pass the time. Obviously, it’s only for the first three months, so if you don’t want to keep the subscription, you can cancel at any time instead of paying more when it goes up. Here’s everything you get even at the cheaper price: 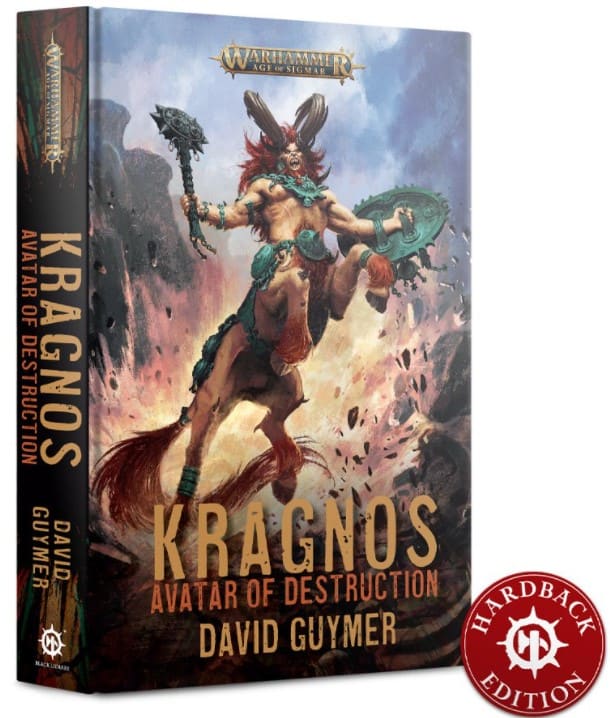 With the return of the God of Earthquakes, the Realm of Beasts is in for some seismic upheaval in more ways than one. 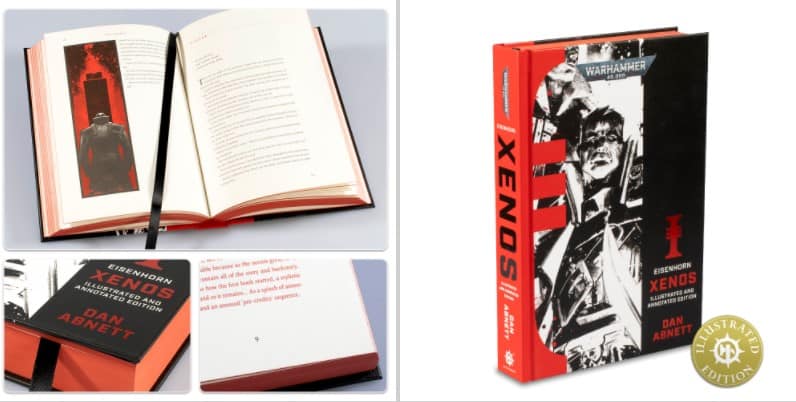 If you enjoy reading about the gritty underbelly of the Imperium, and how forces within and without seek to manipulate things to their will behind the scenes, you’ll love this book, which kicks off the story of Inquisitor Eisenhorn. Does he bend the rules to do what’s ultimately right, or is he little more than a dangerous radical? You decide.

Eisenhorn is a fan favorite, so if you are interested be sure you pick up this book ASAP when it finally does drop! 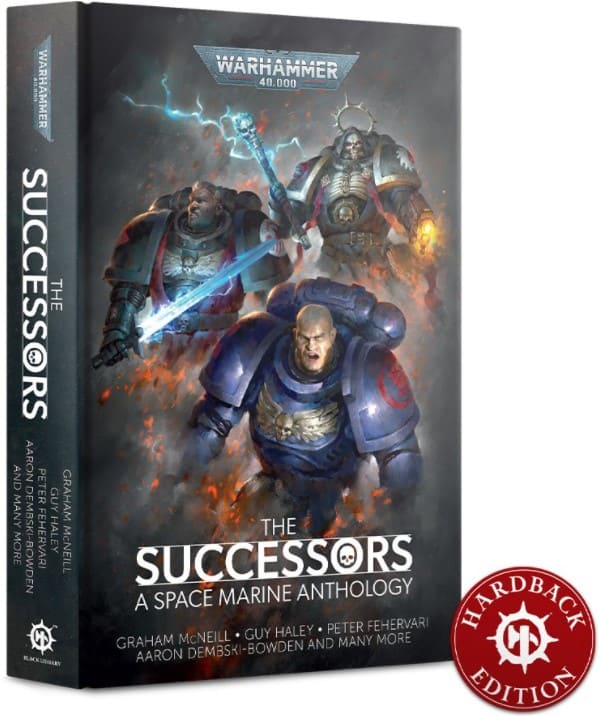 From storied successors including the Crimson Fists and Flesh Tearers to lesser-known Chapters like the Emperor’s Spears and Consecrators, you’ll be spoilt for no-holds-barred Adeptus Astartes action.

The nature of Successor chapters and their unique attributes help make 40k one of the most interesting sci-fi settings, so this book is sure to be great on that basis alone. 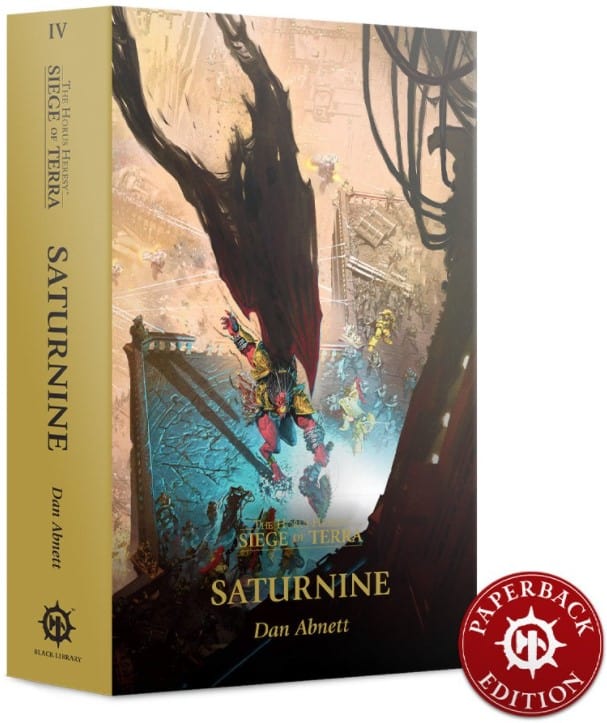 The fourth instalment of the Siege of Terra series, Saturnine, is coming soon in paperback, and it sees the fighting escalate to new heights across the perimeter of the Emperor’s Palace.

If you were unable to get it before, rejoice as the new Paperback should be easier to get a hold of (and cheaper!). 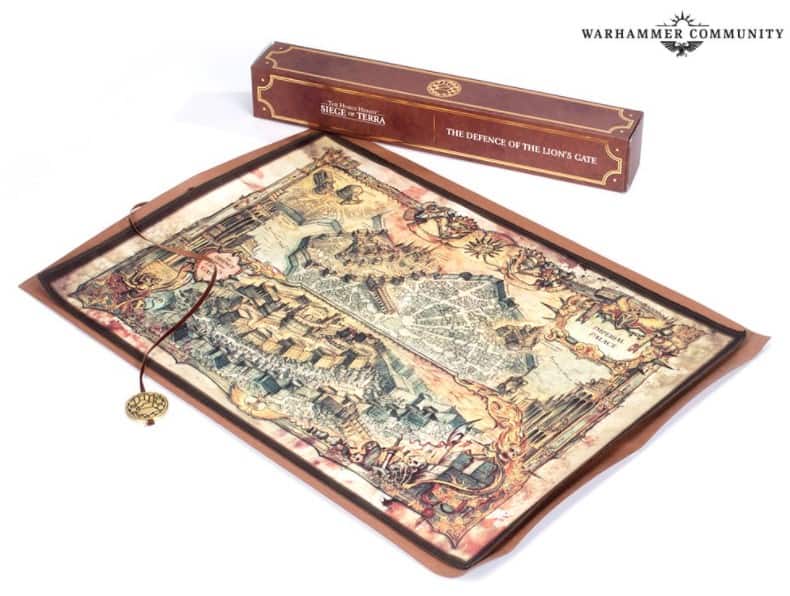 What’s more, you can keep track of where all the action takes place with a map focusing on the Battle of Lion’s Gate space port, wrapped in vinyl for an opulent feel and stunning presentation. 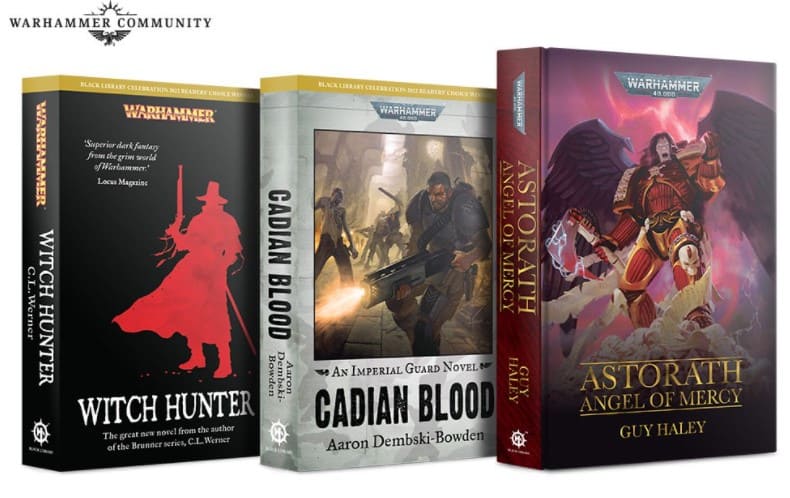 We’ve also got two Reader’s Choice books up for reprint, Witch Hunter and Cadian Blood, as well as the hardback of Astorath: Angel of Mercy – available for the first time since its release as a super-special edition last Christmas.

Another set of books you might have missed, these should all be great picks for anyone interested.

Sigismund: The Eternal Crusader will reveal everything there is to know about the stoic First Captain of the Imperial Fists and will be available as a limited edition hardback as part of the Black Library Celebration 2022.

With the Black Templars recent update, this book might go quickly, so be sure to grab it while you can after it goes live. 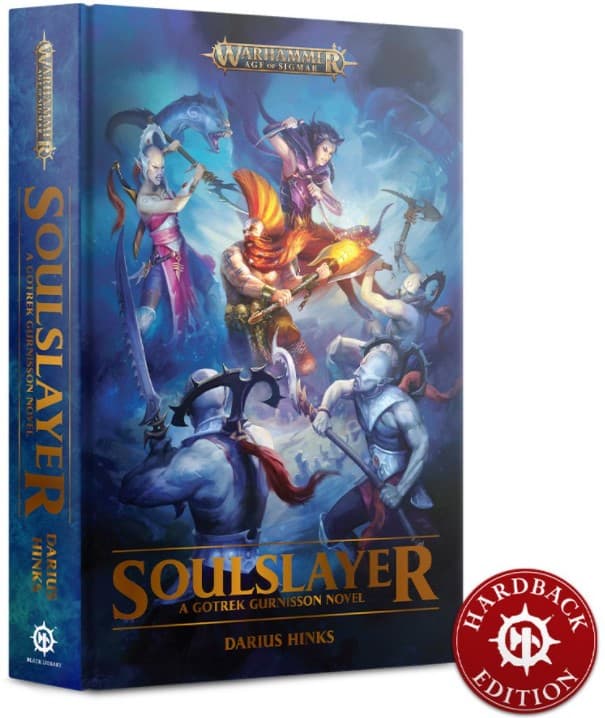 Gotrek has been slaying across the realms ever since his reemergence in, well, Realmslayer. His latest epic adventure, Soulslayer, is coming next year as a hardback.

Gotrek is and has always been a fan favorite, because who doesn’t love an angry dwarf slaying everything around him? Either way, this one is sure to be another great addition! 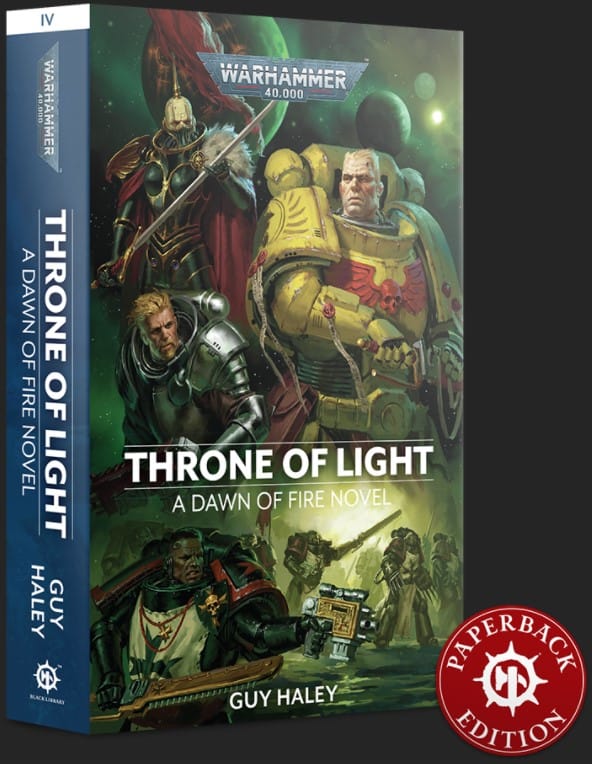 Throne of Light continues the action from The Wolftime and sees the Indomitus Crusade push ever further from Holy Terra to face fresh new tribulations. 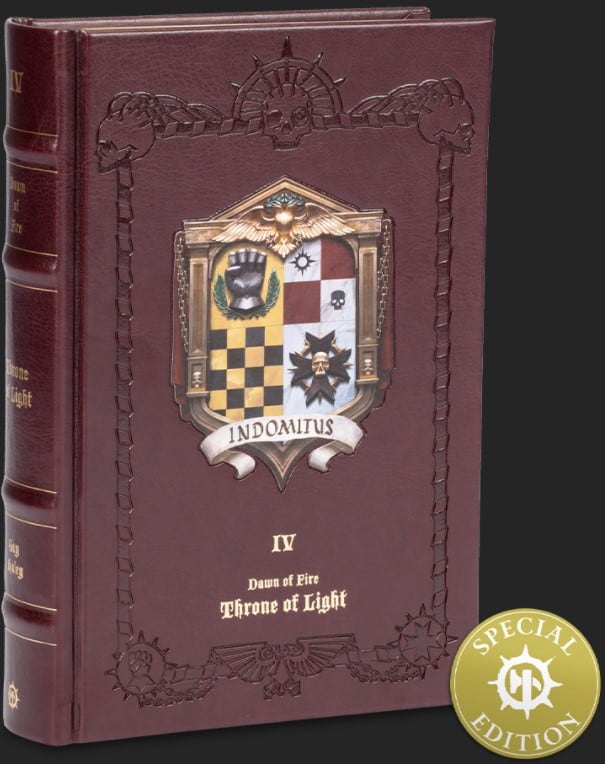 It’ll be available as a paperback and shiny special edition.

Let’s take a closer look at what else is on its way in 2022, starting with the thrice-blessed limited edition of The Triumph of Saint Katherine, by Danie Ware. 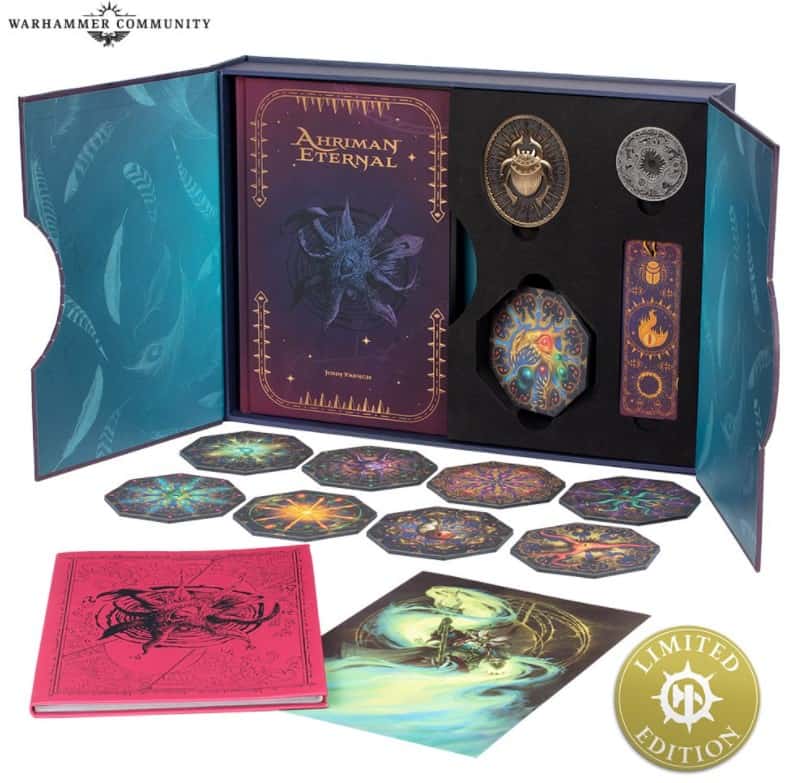 From one limited edition to another – this time, Ahriman Eternal by John French, the fourth instalment in the series. This book comes in a stunning display case, complete with a variety of esoteric arcana and more besides. If you seek the boon of Tzeentch, this is surely the way to do it!

With Chaos fans being so dedicated, this very unique limited edition is sure to sell like hot cakes!

The Master of the Maelstrom, Huron Blackheart, is set to star in his very own novel, courtesy of Mike Brooks. In Huron Blackheart, which will be available as both a hardback and special edition, the lord of the infamous renegades known as the Red Corsairs must adapt to the unfolding events of the Era Indomitus or die trying.

Speaking of chaos, the only release here getting both a normal and special edition is this one! Huron is an interesting character, so if you want to learn about him this is the book to do it. 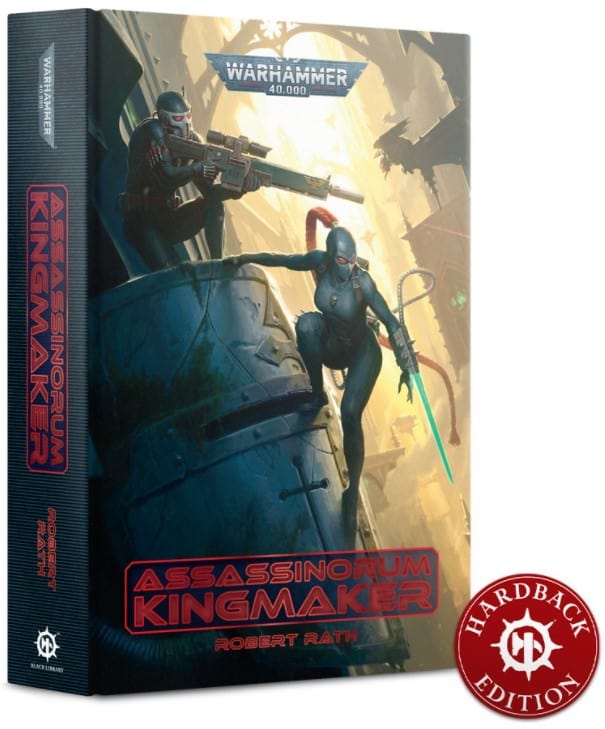 Assassins and Imperial Knights. It’s a match made in (a grimdark version of) heaven. Robert Rath’s upcoming novel, Assassinorum: Kingmaker, coming next year in hardback, sees two deadly killers become embroiled in the politicking of a Knight world in turmoil. 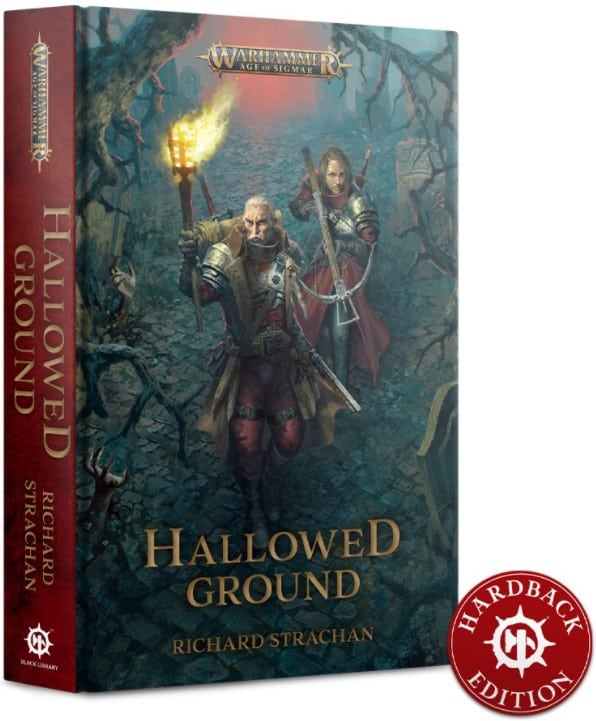 Richard Strachan’s hardback novel Hallowed Ground will make for a great follow-up read to Kragnos, Avatar of Destruction, as not only is it also set in Ghur, the Realm of Beasts, but it kicks off in the aftermath of Kragnos’ return.

And finally, Dan Abnett has another treat lined up for fans of his Eisenhorn books in 2022. His Ravenor spin-off series is also getting some love with the return of book three – Ravenor Rogue – soon to be available as a signed special edition.

As another fan-favorite series, if you are interested you’ll have to keep your eyes peeled on release day because this will almost definitely sell out!

Wondering what’s still out there? Check out all the latest from Games Workshop below!

How do you feel about these new lore releases? Are you excited? 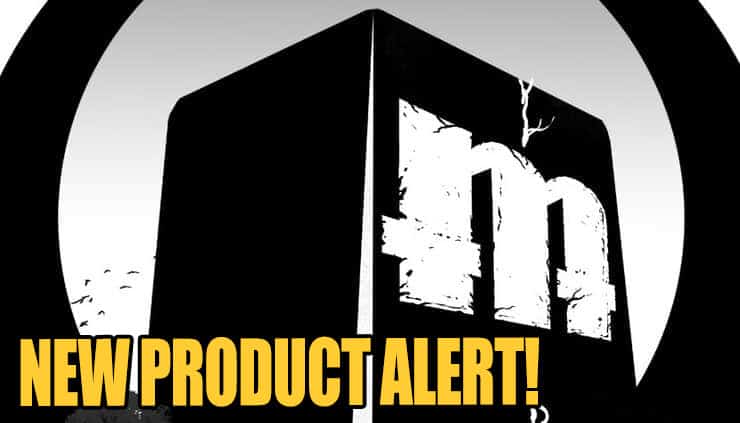 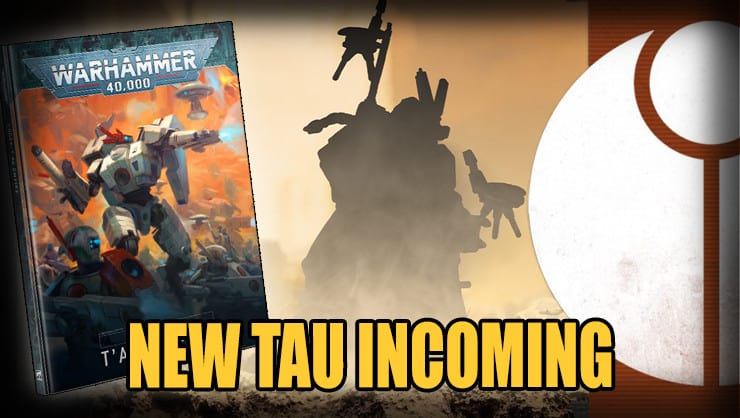 NEXT ARTICLE
GW Reveals New Tau Codex, Darkstrider Model & Rules »
If you buy something from a link on our site, we may earn a commision. See our ethics statement.