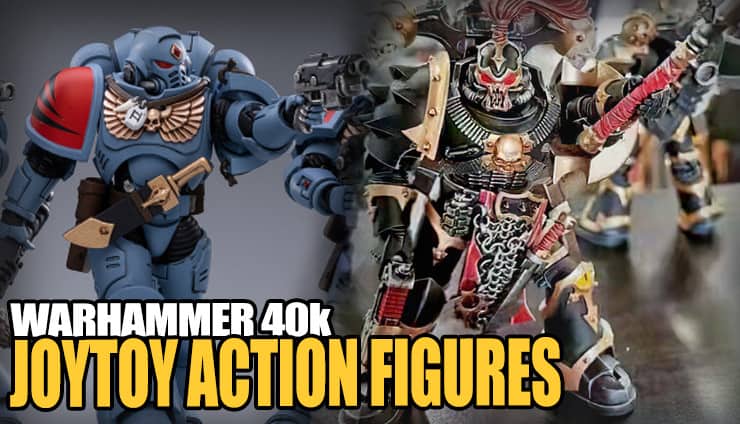 New JOYTOY Space Marines action figures are on the way with reveals of Space Wolves, Chaos, and even another Invictor Warsuit for the Vlka Fenryka.

JOYTOY has been hard at work cranking out new Warhammer 40k action figures for a while now and the newest wave seems to be a Space Wolves lineup along with a potential Chaos Space Marines wave after!

Let’s start by recapping the rumors then dive into those new images!

According to  Fauxhammer these are the latest rumored new Warhammer 40k JOYTOY Action figures that are still potentially out the way.

Fauxhammer said they cannot confirm these rumors, but the community seems to agree with them so far from what we have seen.

If these are right that would be amazing as Chaos would be grabbing figures and even some Orks look to be thrown in there. Apparently, this is all also just in 2021, so if that’s true, we could see an insane number of figures before the year is out.

Either way, it looks like we don’t have long to wait now to see if these are true, as we already know the Librarian and war suit are official. With quite a few left, it looks like we will either see a ton very soon, or they may have delayed their plans… 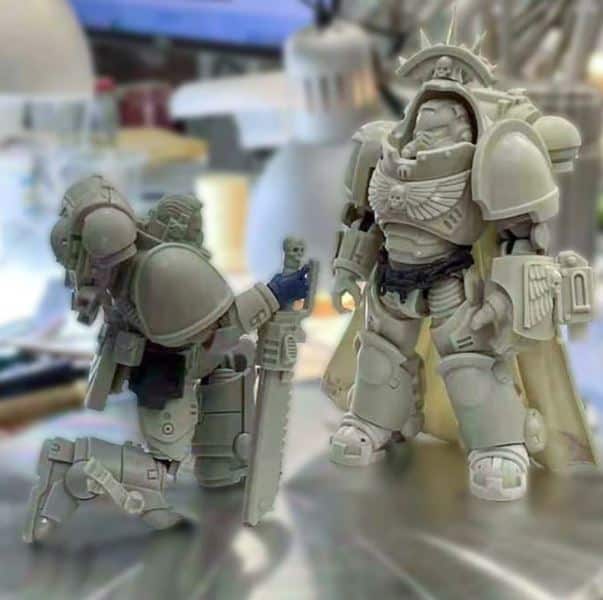 This little pose right here shows you just how much articulation these are going to have. You can even make them kneel before you in all your power! Don’t worry though, it’s not all Imperial scum this time around. 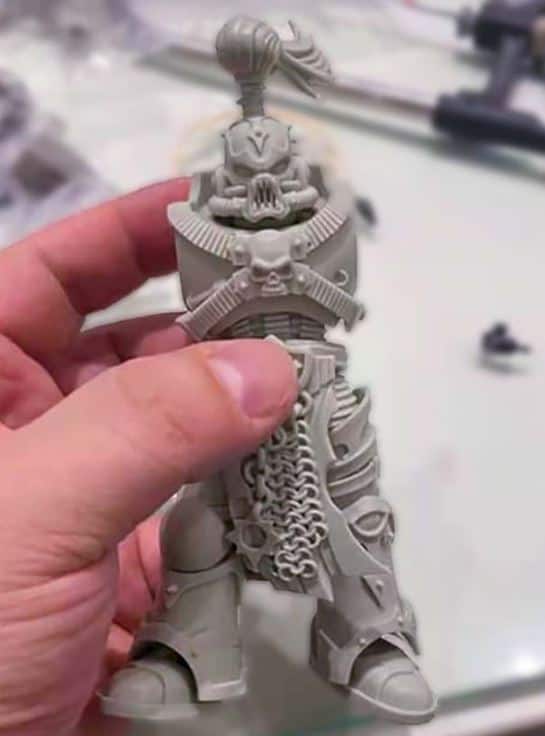 Finally, they are venturing away from the good guys! Chaos doesn’t get nearly enough love when compared with the Space Marines, but this looks just as crisp and detailed as all the others.

But let’s dive into those newly spotted figures!

First up we’ve got the official pics of the Space Wolves spotted over on Gcores. 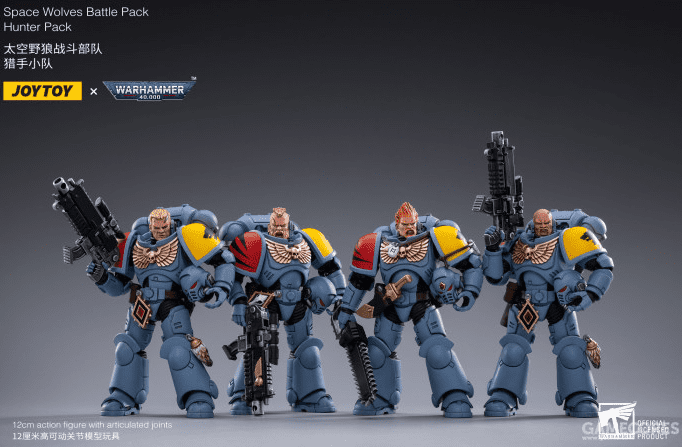 With the new figures, this is what the company had to say:

The space wolf combat unit has as many as 21 joints on the basis of restoring the original settings, plus 25 joints for the replacement of equipment at the waist of the character. The joints are made of new-strength steel material technology, which is sturdy and resistant to play while ensuring the integrity of the shape.

This time, the color of the character’s armor is distinct, including the main body cyan, black, red and yellow on the shoulders, which are all in sharp contrast. To ensure that the wolf head logo on the right shoulder is clear and sharp, we use pad printing technology to transfer, so that the actual object The overall look and feel will be better. 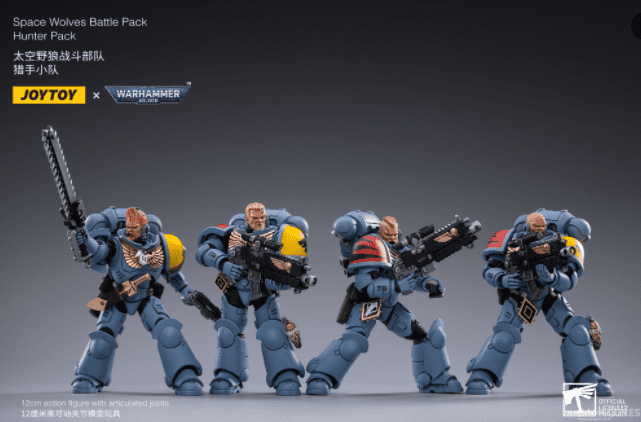 And of course, the models feature the same possibility we’ve come to expect from JOYTOY Space Marines Action figures. 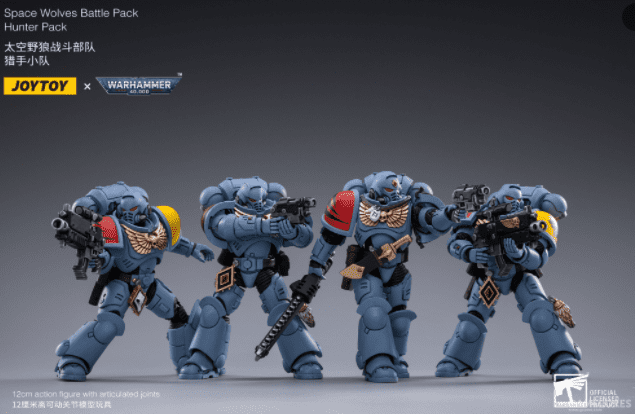 On top of it, there are also helmet options if you prefer to hide the rugged heads of these Space Wolves marines.

You can also check out the video featuring all the new JOYTOY Space Marines Action figures and their options below:

Vlka Fenryka! In the same article, they also put a spotlight on the new Space Marines Invictor Warsuit Action figure for the Space Wolves! 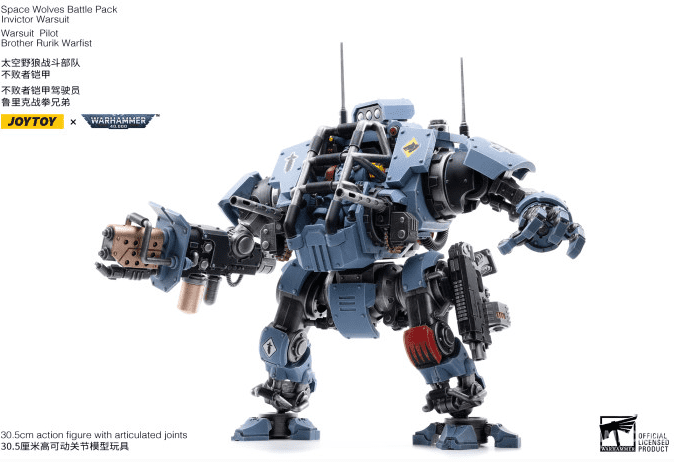 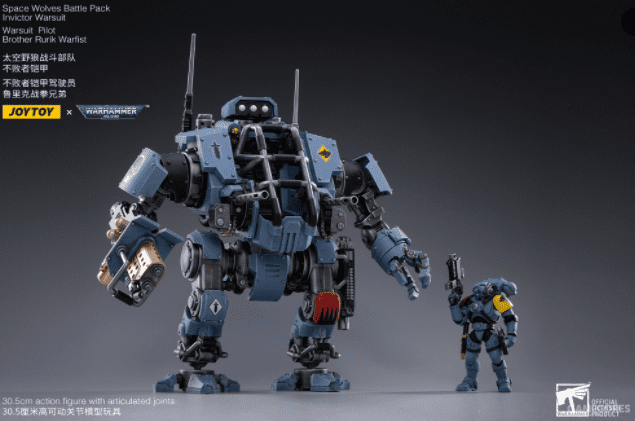 This new Invictor suit is just like the ‘basic’ Warsuit we saw before, except this time the Warsuit and pilot are fully decked out in Space Wolves Iconography!

Once again, they also were kind enough to put out a video featuring this model as well:

Heretics rejoice the last, but not least, of the new figures spotted was an unofficial image spotted over on Fauxhammer. 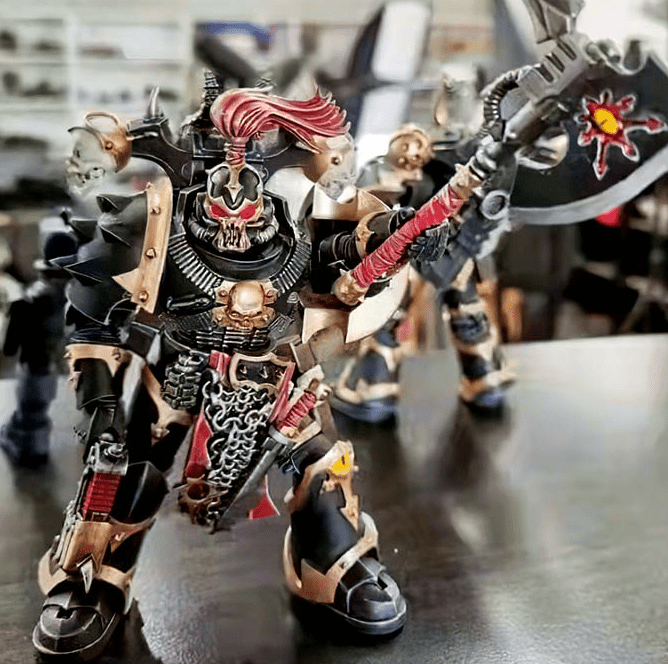 These certainly look like the real thing and we can sorta see the back of another Chaos Marine to the right, however, that still leaves at least three Marines in the pack unaccounted for! As for the first Chaos Marine that we’ve been able to get a look at, this guy is our want list for sure! A new Plasma pistol and Power Axe, plus he’s fully decked out in spikey bits our favorite!

What’s not to love!? We will just have to wait and see what the rest of the squad looks like! Fingers crossed for new JOYTOY Chaos Space Marines Terminators Action Figures!

Do you like the idea of a Space Wolves Invictor Warsuit and even Chaos Space Marines as action figures? 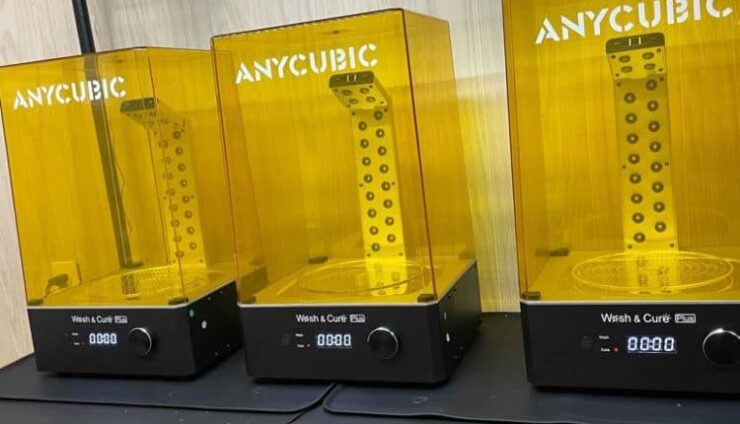 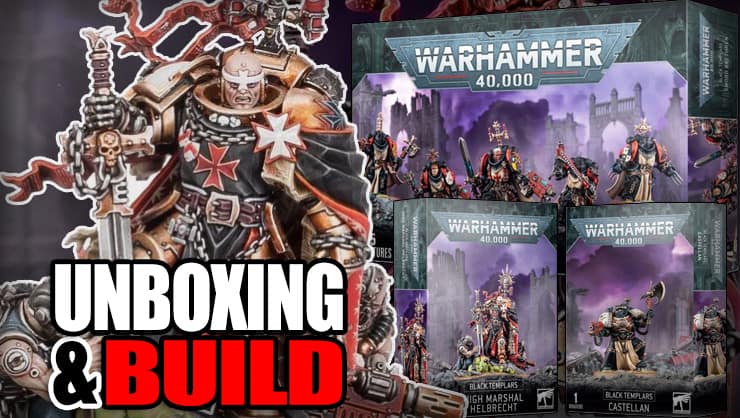 NEXT ARTICLE
Marshall Helbrecht, Castellan & Sword Brethren: 40k Unboxing »
If you buy something from a link on our site, we may earn a commision. See our ethics statement.