You can grab the new exclusive Inquisitor and Gutrippa Boss minis this year at Games Workshop store anniversary events!

If you haven’t heard how this promotion works, here are the quick details. These new exclusive models will be available for a full week on the anniversary of your closest GW store’s opening. Unfortunately, if you live far away from a store, these usually can be found on the secondary market but can be expensive.

Last year, Games Workshop also offered a bunch of other gear for sale as well, so we wouldn’t be surprised to see some of that in the future either.

Warhammer Community announced the new models along with a store finder and a way to see their anniversary. Let’s check out the minis you can score! 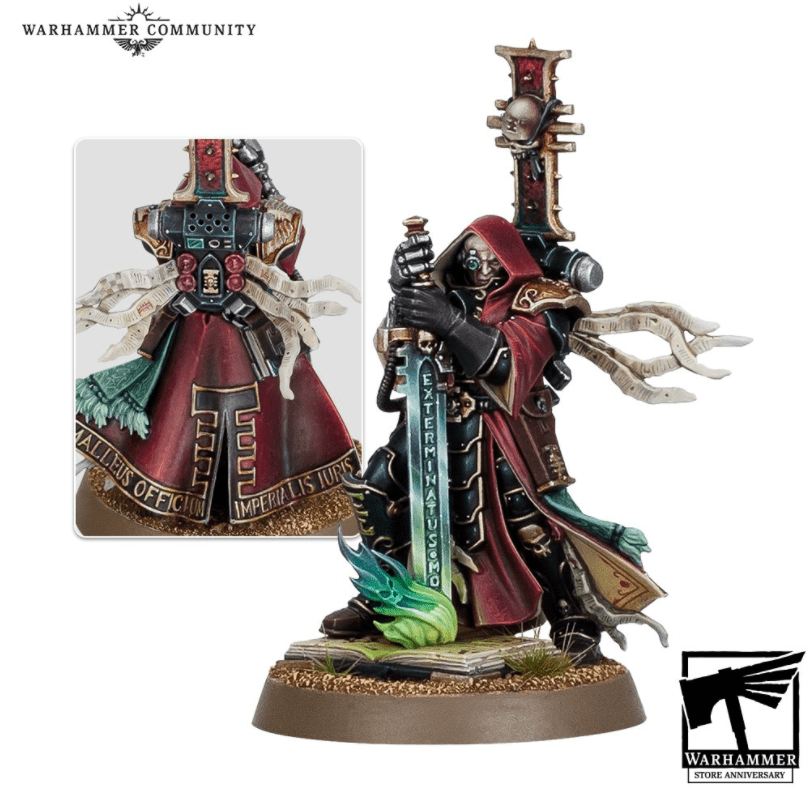 The Ordo Malleus is dedicated to hunting and exterminating daemons wherever they appear, and Erasmus Cartavolnus has been doing it for over 300 years. Despite his advanced age, this zealous Inquisitor still strides the battlefield in search of daemonic quarry, and his knowledge of binding rituals is second to none.

This is honestly pretty cool with the huge flame exploding from the book and giant sword. While the pose itself isn’t super dynamic, all the extra pieces of flair make up for it. We’ll have to see if they come up with any rules for him, but probably not.   Still, he would be a cool Inquisitor to add to your forces.

Looks like we may have known about him from two previous 2020 advent calendar teasers: 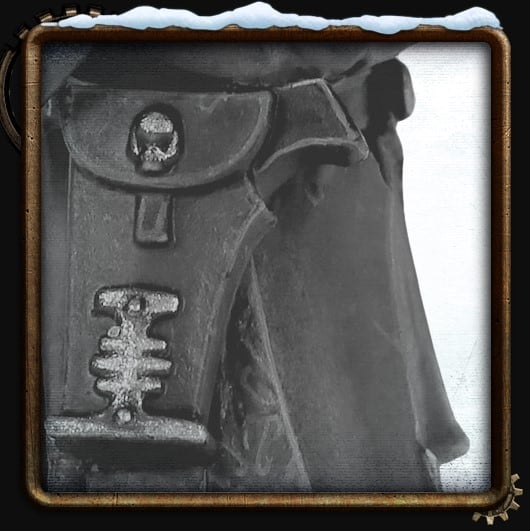 This is very clearly something from the Inquisition, perhaps even an Inquisitor! The real question at the end of it all is who/what is holding the holster? Is it a new nameless Inquisitor or an old one getting a revamp? It’s impossible to say for sure!

Seems like we mostly nailed the prediction over a year ago too, but who knew he would turn out to be Inquisitor Erasmus Cartavolnus…

There’s A Boot In My Shoot: Advent Calendar Day 8 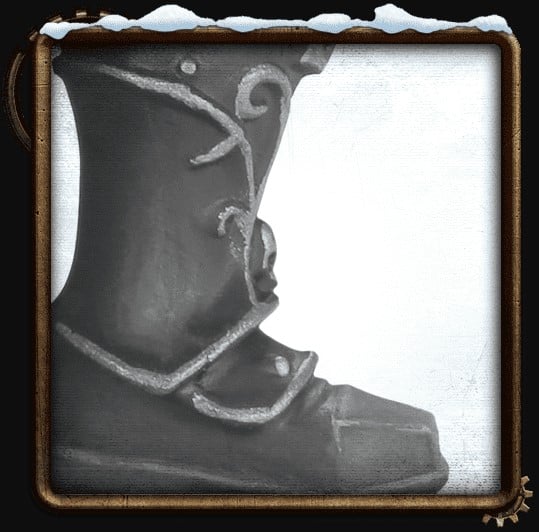 There might be a boot in this shoot, but there are also boots all over Warhammer! Placing this rumor engine is nearly impossible. The only thing we can say for sure is that it probably isn’t for Orks! Their boots tend to be a bit more “used”. There appears to be a skull on the front, but it’s hard to make out for sure. It could both 40k and AoS and also could bealmostany faction. 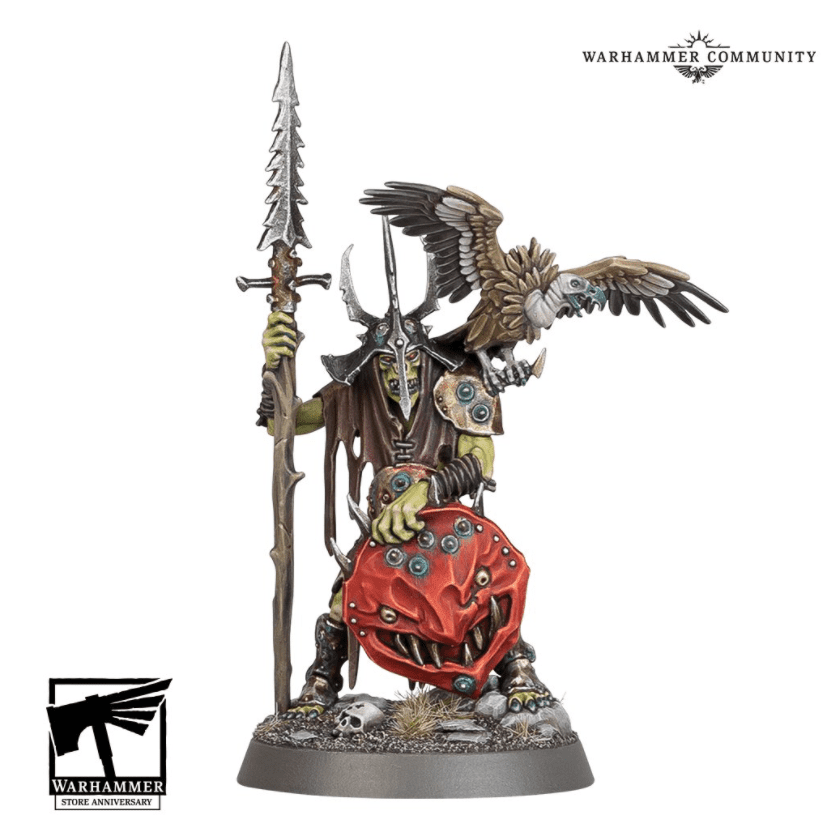 It takes a wily creature to command the respect of a Kruleboyz Gutrippa mob, and Haggok is always on the lookout for his latest would-be usurper to pre-emptively run through. With a (mostly) tame vulture keeping its beady eyes open for incoming threats, Haggok has time to relax a little and survey the battlefield, leaning casually on his skareshield. He fits in perfectly with your existing Gutrippa warbands, and as a unit leader, he has a more refined air than your average Kruleboy can muster.

It’s nice at least this year to see something other than Necrons or Space Marines get the minis! He’s not the most exciting model, but still pretty cool. If for nothing other than the vulture! We also saw Gutrippa Boss Haggok a long time ago as he was hidden in plain sight and in a rumor engine. 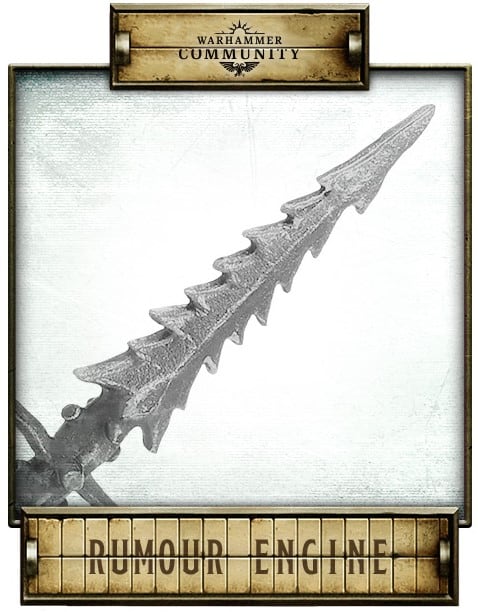 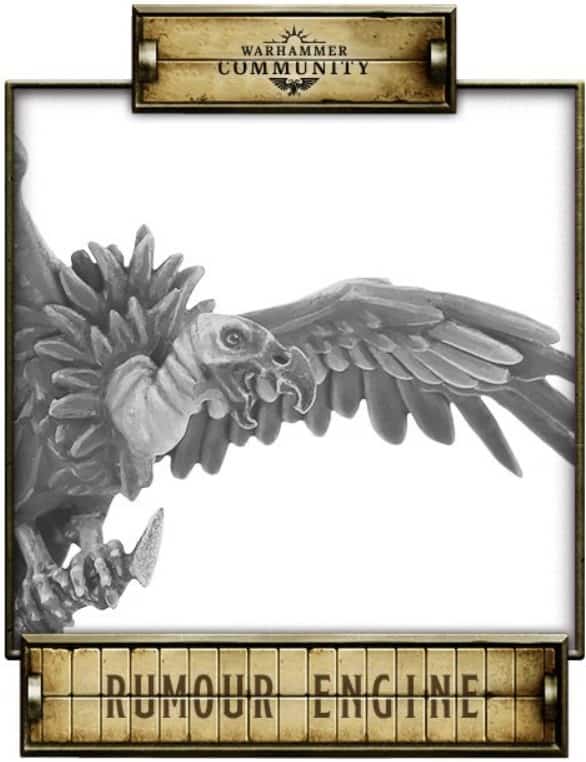 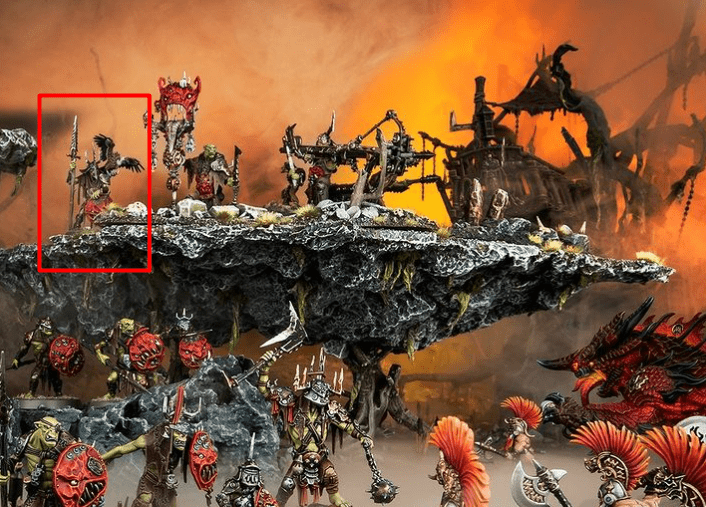 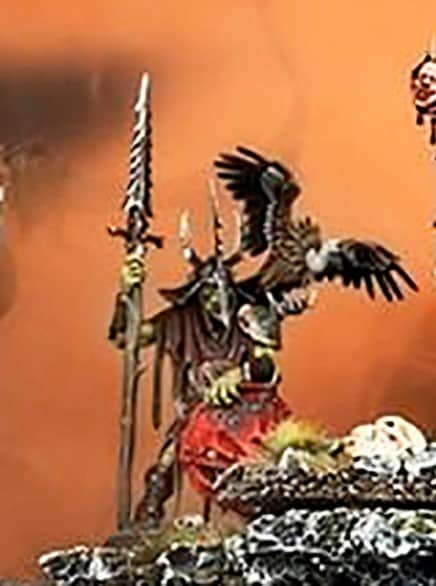 It looks like he may have slipped into this picture by ‘accident’. Then, with a rumor engine, we more or less expected this to be coming out at some point. And we finally will be able to grab Gutrippa Boss Haggok soon!

Here are the new exclusive Primaris Company Champion and Swampcalla Shaman miniatures that will be available at GW events this year!

Warhammer Community announced the new models along with some of the events you can get them at, such as AdeptiCon coming up. Let’s check out the minis you can score! 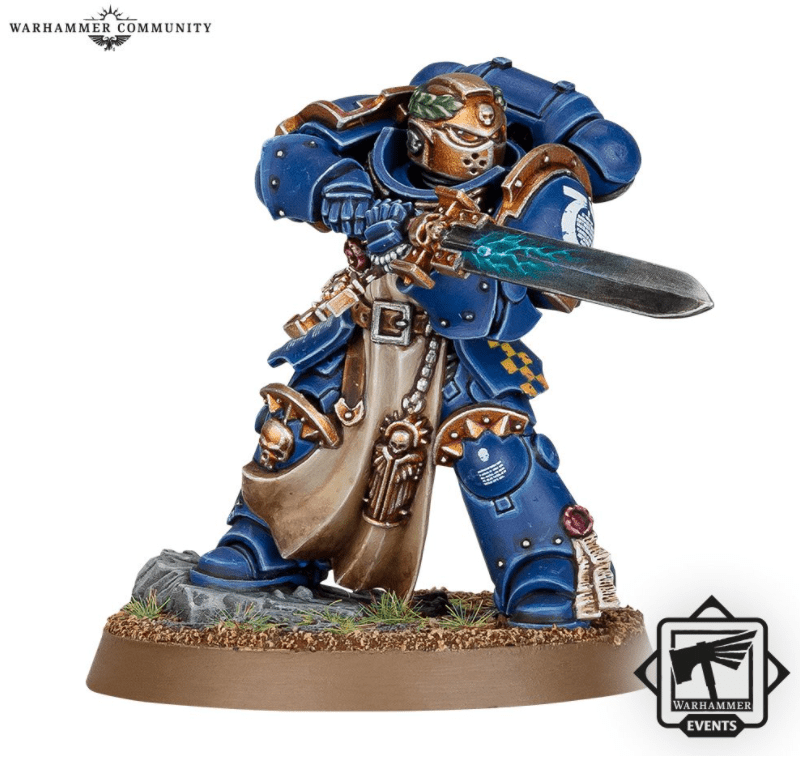 For Warhammer 40,000 comes the sword-swinging Primaris Company Champion. These formidable warriors of the Adeptus Astartes defend their chapter’s honour on the battlefield, armed with a devastating master-crafted power sword and skills honed over countless duels. 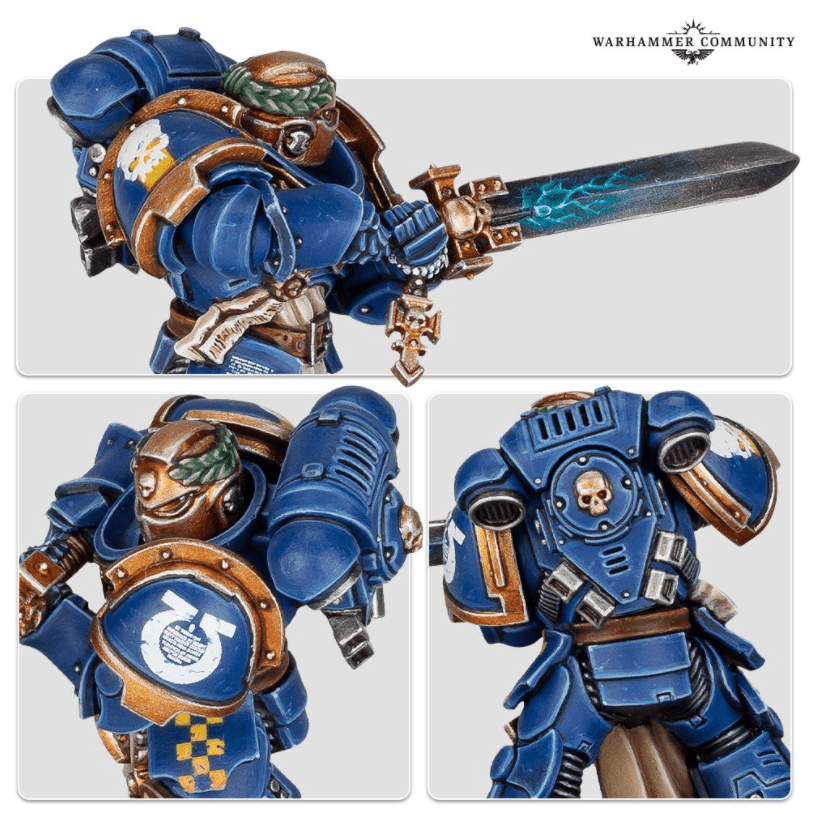 The Primaris Company Champion even has an entirely new datasheet for use in Legends games of Warhammer 40,000, loaded with three deadly Blade Stances. You can also use him in other games, perhaps as a particularly cool squad leader, or even the Emperor’s Champion.

While this exclusive Space Marines Primaris company champion doesn’t have a set role in regular 40k games, it would make for a ton of really cool proxies, and since it’s a GW product, nobody can hassle you for it. It’s an interesting mini but not the wildest thing we’ve ever seen.

You’ll be able to acquire these miniatures at Warhammer events throughout 2022 – such as AdeptiCon, which is taking place from the 23rd to the 27th of March in Schaumburg, Illinois.

If you’re going to the event and want either, better to pick it up there instead of trying to fight for it on the secondary market. 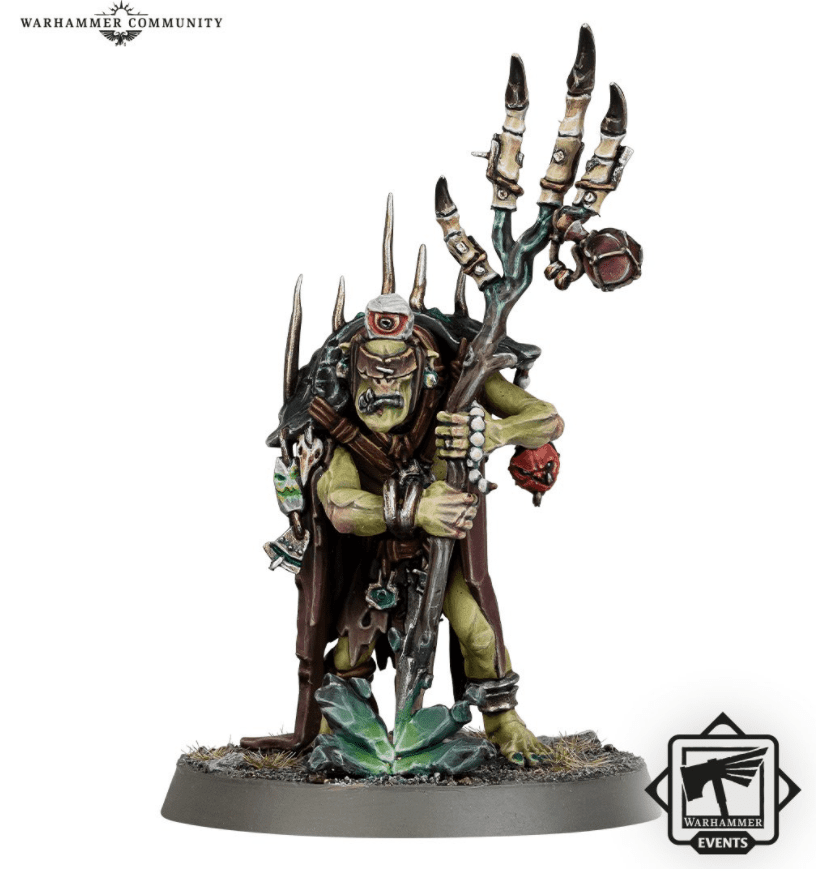 For Warhammer Age of Sigmar, meet Mugruk Da Watcha! This Swampcalla Shaman believes he’s found a new way of observing the battlefield using a special seeing-eye rock, but it’s really nothing more than a neat hat. 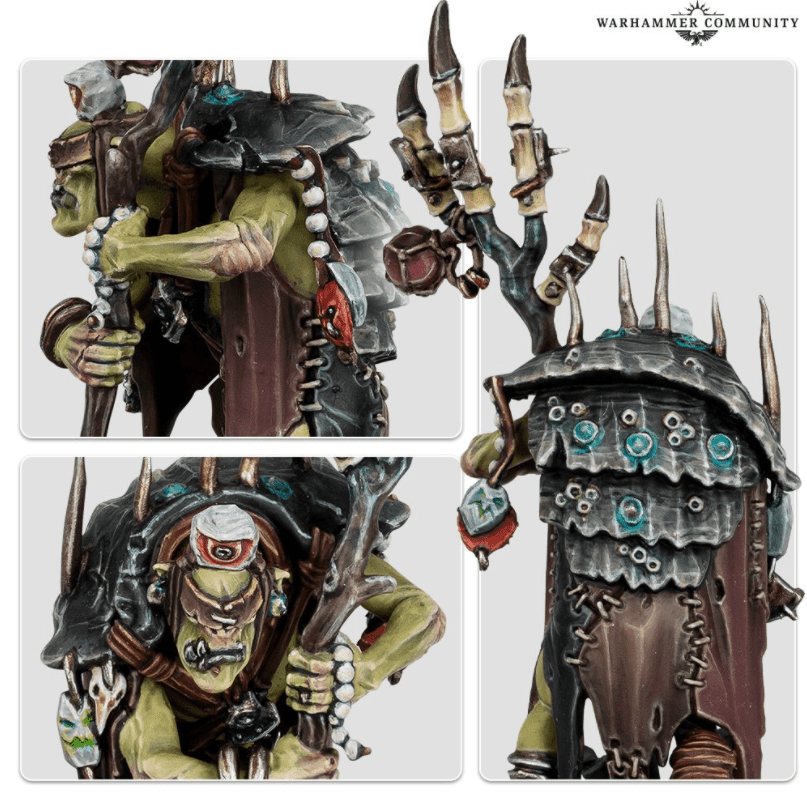 Wearing a blindfold won’t keep this malodorous mage from getting stuck in with a bogbark staff and he’s brewing up a bevy of elixirs to empower the venom-tipped weapons of his fellow Kruleboyz. Mugruk isn’t accompanied by a pot grot, but he can still jab at foes with his own backup stabba.

This is actually a really cool mini! While the pose is sort of static, it more than makes up for it in detail. Plus, it’s not a Stormcast! Which we’ve seen so many exclusive minis for them. So it’s just nice to see something else.

24 Exclusive Warhammer Miniatures That Are Must-Haves 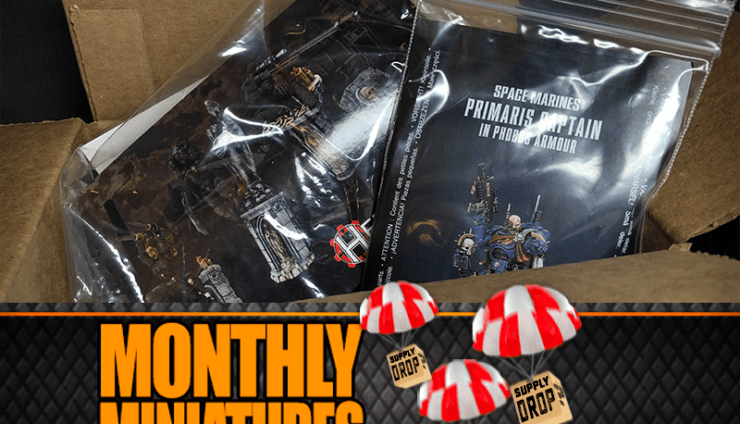 PREV ARTICLE
« Get The New January Miniatures of The Month Crate Now! 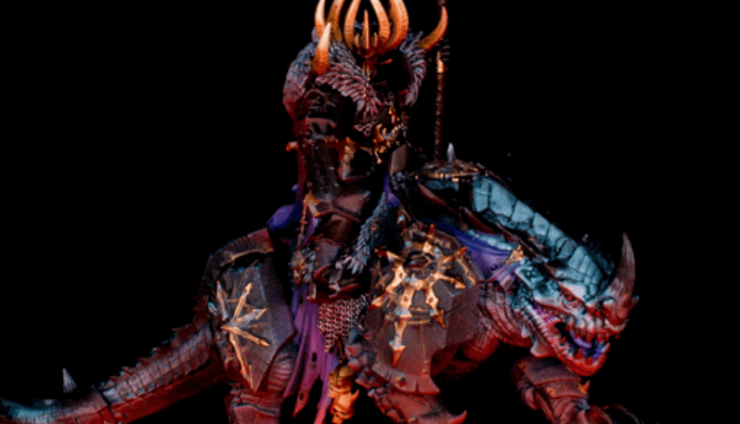 NEXT ARTICLE
Rampaging Against the Mortal Realms: Armies on Parade »
If you buy something from a link on our site, we may earn a commision. See our ethics statement.