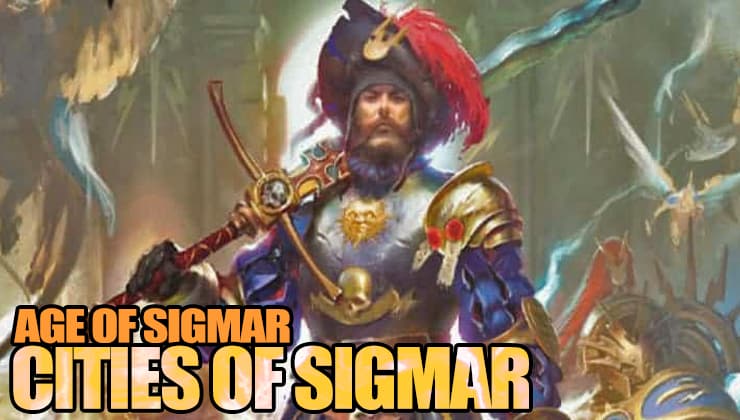 Cities of Sigmar will finally get an update; check out all the Dawnbringer previews revealed by Games Workshop!

People have been asking for this for a really long time now, and even though these are just renders, it’s really nice to see GW coming out with them!

Warhammer Community unveiled a decent amount of pieces, just enough to give us hope! Let’s check out the previews! 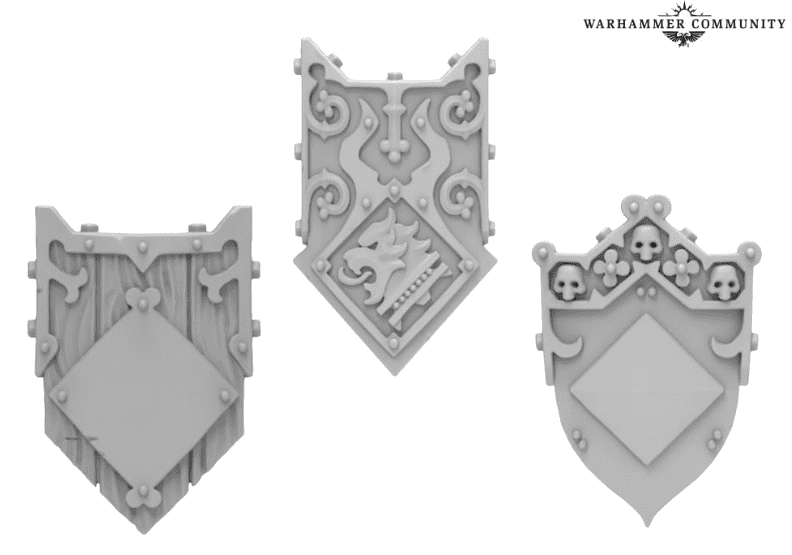 Now we can reveal the shields and armour these people use to protect themselves in the harsh wilds beyond their walls. Seb Perbet, a senior designer at the Warhammer Studio, offered his insight into the decisions behind the designs.

“One of our main goals is to show the mindset and culture of the Cities of Sigmar in every item they’ve produced,” said Seb. “Whether it’s a breastplate, a shield, or even a bag or bottle, we want to show a certain fashion and level of craftsmanship rooted in their culture.”

They are pretty stylized and look like a great start to us. They also did this sort of preview (showing the renders of weapons and such first, with the World Eaters for Warhammer 40k (and Sister of Battle a few years before that). Then we started seeing minis about a month or so later, so this might follow the same path. 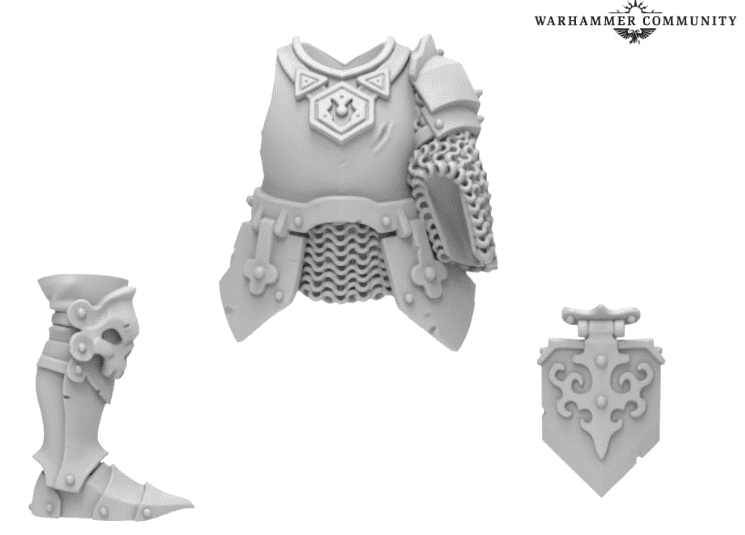 “The materials shown – such as wood, metal, cloth, and leather – are all chosen and rendered to make the Cities feel relatable compared to the other factions of the Mortal Realms,” Seb explains. “The overall silhouettes are simple, with many straight lines and robust proportions, showing the users are resolute, determined, and sturdy.”

This looks pretty classic for the faction, so it’s nice to see them keeping with the aesthetic while updating it to the new edition. 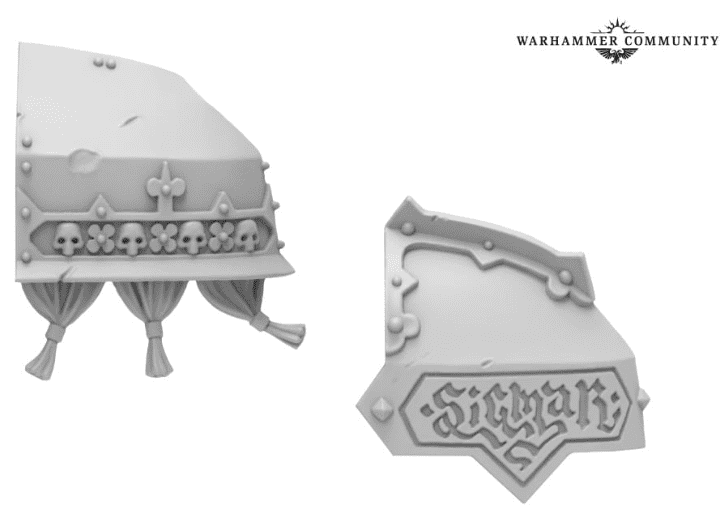 “Within this austere silhouette, there are more ostentatious details, which tells us many of these people are proud and wealthy too. We’re carefully setting a level of wear and tear that communicates they’ve been through storms and battles – these soldiers are exhausted, but still standing.”

Of course, they would have awesome Sigmar inlays on their armor! Again, this is just the beginning, but we hope to see more soon!

Warhammer Community unveiled a decent amount of pieces, just enough to give us hope! Let’s check out the previews!

The Dawnbringer Crusades are Sigmar’s grand push back into the lost regions of the Mortal Realms, founding new settlements that they hope will someday grow into Free Cities of their own. Each expedition is spearheaded by a contingent of soldiers armed with hardened steel, behind which trails a caravan of colonists, supplies, beasts of burden, and pre-fabricated buildings. If all goes well these soldiers will be able to join in and settle down peacefully, too – if all goes well.

Unfortunately, they do say in the article, that this is still a long way off. Even going as far as to say we will not see them this year. But let’s hope they don’t push too far into 2023. 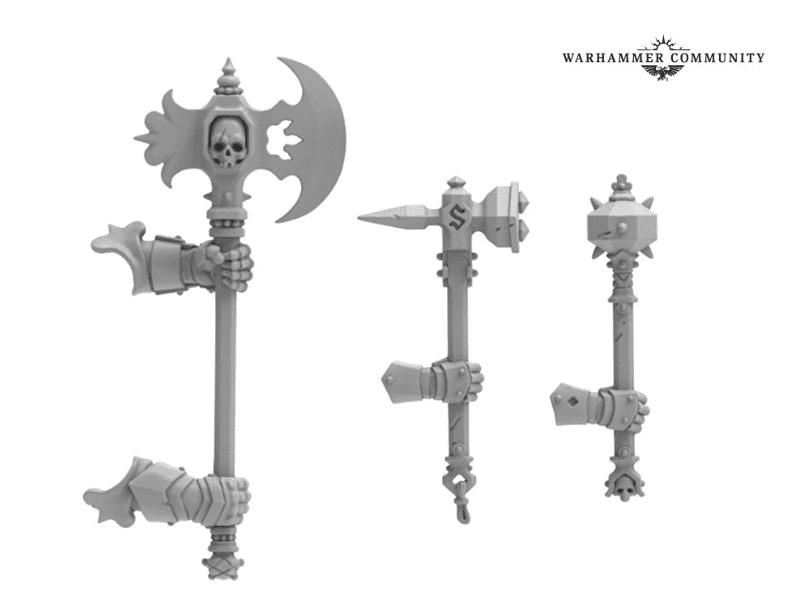 Unfortunately, these shattered realms are beset with horrors, raiders, and unfriendly fauna – or flora – but an honest cutting edge or doughty spiked maul is just as good as the lightning-wrought divine weapons of the Stormcast Eternals. Probably. In a pinch.

We had seen a few of these before now, but it’s nice to see a bigger arsenal. They also did this with the World Eaters, then we started seeing minis about a month or so later, so this might follow the same path.

Although rare and unreliable, gunpowder weaponry is also available for those who’d rather keep their distance, from intricate flintlock pistols that can shoot through the breastplate of a Hobgrot Slitta at 40 paces, to an ingeniously brutal combination of pike and man-portable cannon.

While it’s not a ton, it’s better than nothing!

Here’s the most up-to-date list of new Games Workshop bits from preview models that we should watch out for. Click on the gallery above to see dozens of Rumor Engines with new models still to be revealed!

Are you excited about the rework for the Cities of Sigmar? 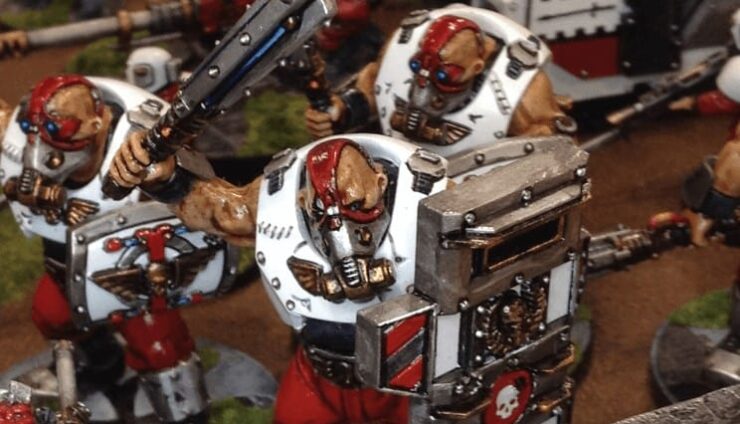 PREV ARTICLE
« Taking Over the Front Lines: Armies on Parade 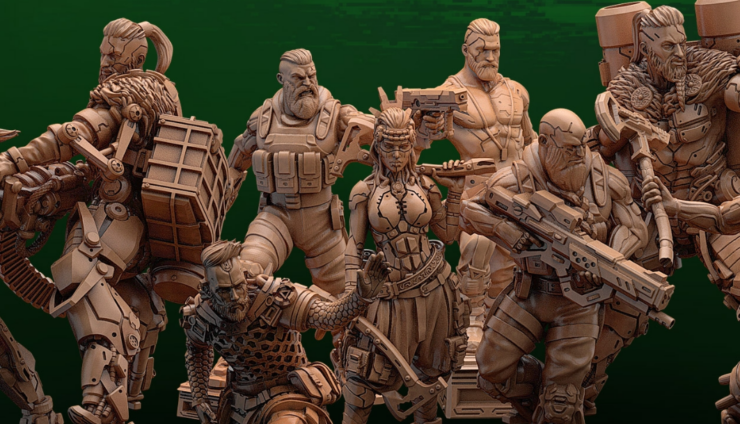 NEXT ARTICLE
Raiders of Ymir: October Unit9 3D STL Files »
If you buy something from a link on our site, we may earn a commision. See our ethics statement.