Gather ’round and come see the newest releases for Games Workshop for this week, and yet another “chaotic” teaser!

Plus as promised a very chaotic teaser:

Now while there no indication if that means more weeks of Age of Sigmar OR something Chaos related for 40k, there is something in this teaser that jogged my memory.

Remember the new starter collector armies that came out at the beginning of the year? Well there is one named the Slaves to Darkness, so perhaps just like this week that will be the feature in White Dwarf #105? 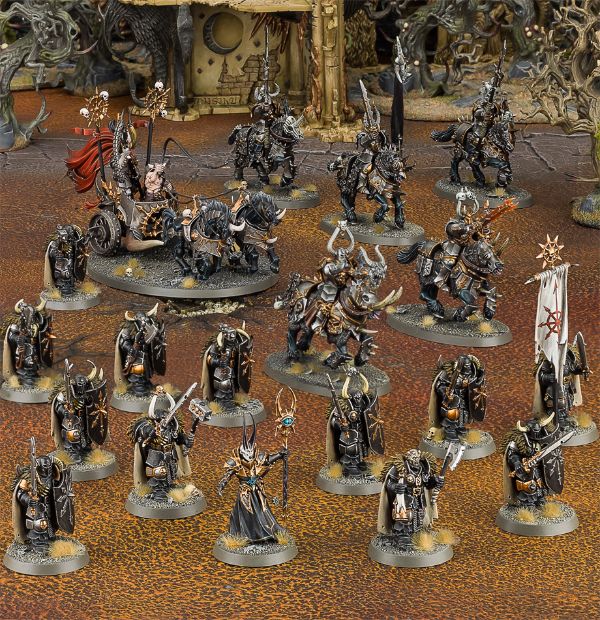 The mortal worshippers of Chaos gather together in warbands mighty enough to conquer entire nations. Though the tyrannical lords that lead the armoured hordes believe themselves to be warrior kings born to rule the Mortal Realms with an iron fist, they are bound to higher powers in their turn. In truth, every murderer, monster and mutant in their armies is but a slave to darkness and a puppet of the Dark Gods.

This is a great-value box set that gives you an immediate collection of fantastic Slaves to Darkness miniatures, which you can assemble and use right away in games of Warhammer Age of Sigmar! You’ll receive a Chaos Sorcerer Lord, a Chaos Chariot, a set of five Chaos Knights, a set of twelve Chaos Warriors and an exclusive Warscroll Battalion rules sheet – Sylvath’s Warhost – allowing you to collect, assemble and play with your new miniatures right away!

It also appears that Games Workshop is switching up their Age of Sigmar supplement releases and dropping a HUGE tome of Chaos called Grand Alliance, in softback for $33 even! Chances are this could even be the lead up into a cycle of AoS chaos that’s rumored to eventually jump brands into 40k just like the Daemonkin before them!

So either way looks like something Chaos will be featured once again in the White Dwarf 105 for next week!

NEXT ARTICLE
NEW CHAOS – Slaves to Darkness Faction REVEALED? »
If you buy something from a link on our site, we may earn a commision. See our ethics statement.