Welcome back Hobby maniac’s to another Fantastic 40k Flashback Today we’ll going back and looking at the 1993 ‘Eavy Metal Paining guide!

This came out when all the ancient painting techniques didn’t live on YouTube, but where closely guarded by the store wizards who had to be bribed with Chinese takeout . There was no internets, only books, and who wants to buy books when you had mini’s to buy? 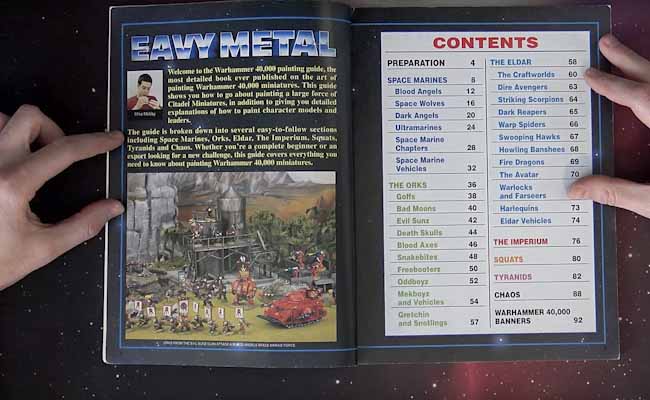 Hobby Guru, Mike McVey, has grown up and turned into a Hobby Butterfly who now owns his own company, McVey Studios. You can see a picture of him here in the top left corner of the page from over 20 years ago.

One thing many of us hobby vets will remember is that the plight of actually assembling models was real. Plastic has been a huge boon to the hobby; pewter was not easy. Of course, there’s a little section telling you to drill out the bolters, if you’re not doing that today, you probably should. 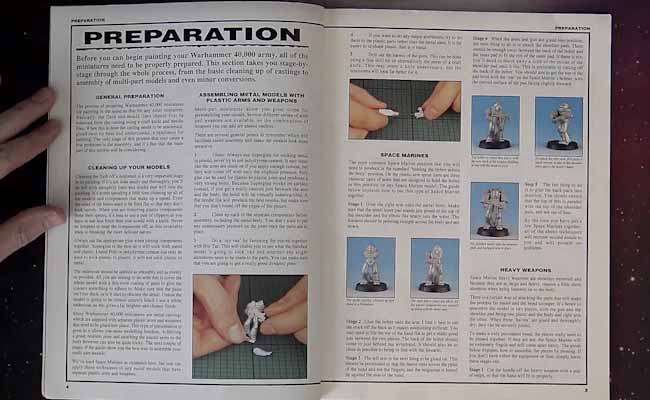 Another great feature of the day was the weapon sprues that let you cut off different weapons to customize your with everything from chain swords to bolters. You’ll notice the different colors of plastic in the pictures. The transition between Privateer Press style skirmish battles and the full scale 40k we all know in love was a beautiful time because customizing and kit-bashing was a seriously thing and it was at this point that I really fell in love with the hobby. 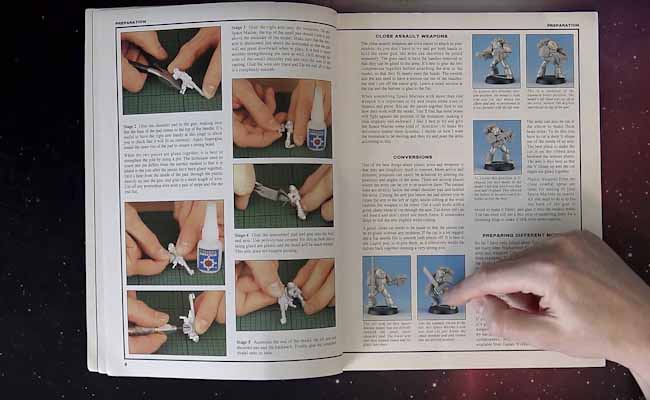 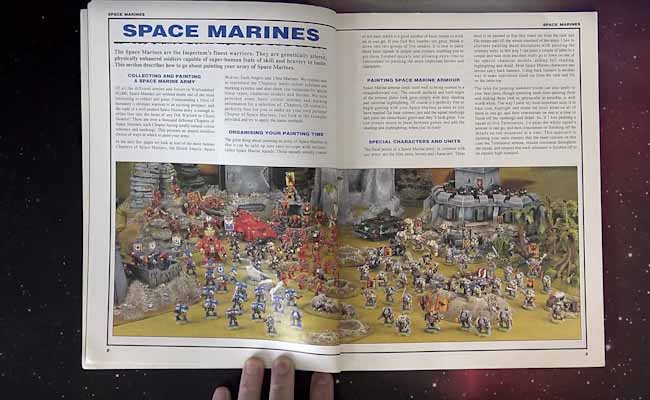 They had really neat diorama’s in here, that I’m sure Mike McVey had a hand in. Then they roll into how to paint Space Marines. They didn’t have washes back then, they had ink’s so the techniques where certainly different. There’s a cool tutorial in here about how to highlight black, which is essentially dulling down gray. 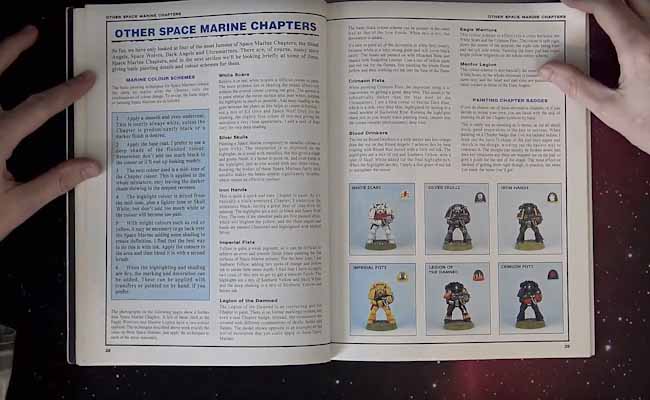 They give you some tips on the different Space Marine Chapters before getting into the Orks. Another amazing diorama which showed you the big huge games that was a departure from the small skirmish level games of Privateer Press level. They go though all the Ork Factions and how to paint them. It’s a great resource.

The Eldar are next, and again, it’s pretty much the same thing as the other two, but you can really see that this is pretty much an all encompassing guide to painting your Army. 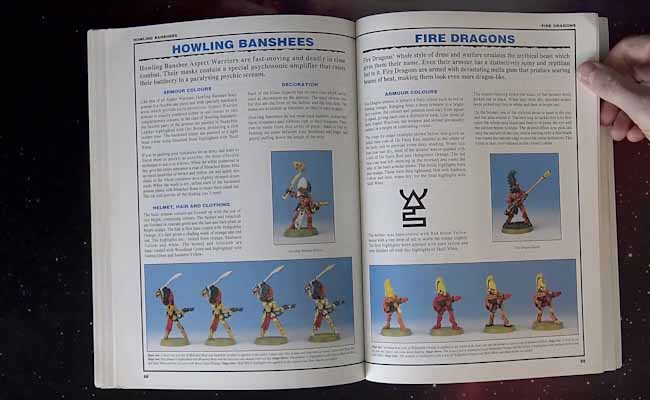 There’s a bit in here about the Avatar, which, at the time, was such an amazing model. If you could paint up the Avatar right you where pretty much the shit back then, this was THE showcase model. 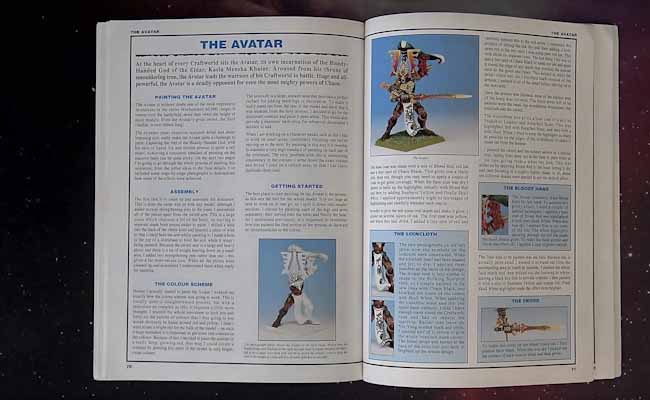 Then it gets into the Imperial Guard and you can see the older plastic guardsman that you may have never seen before if you’re newer. Looking through this is really cool to see the Imperial Agents before they became the Assassins in 1996. 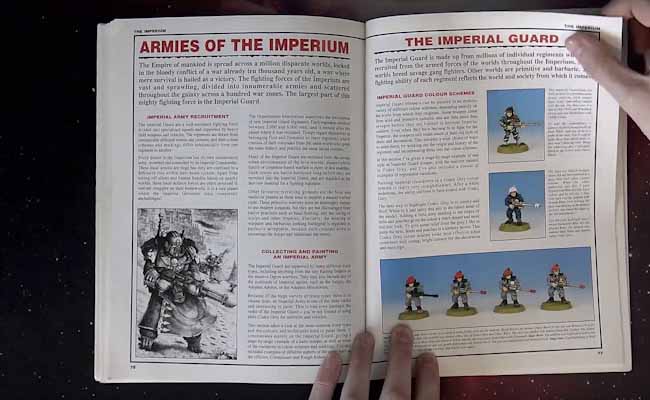 Then of course the Tyranids and the old Screamer killer, Carnifex, that thing was 50 bucks, even back then this hobby was expensive. 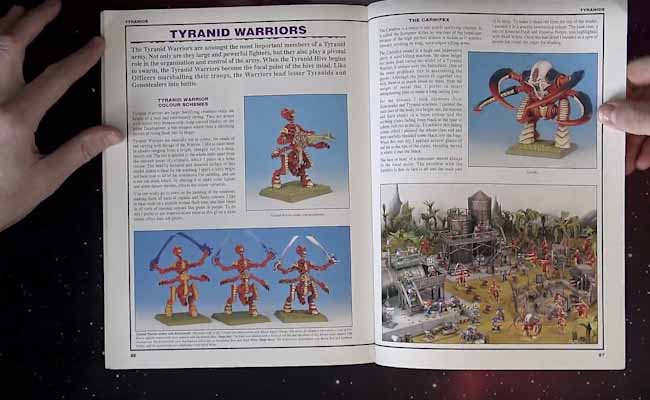 In the Chaos section you can what was like the original Tower of skulls which was made by Armorcast back in the day. It’s rarely seen today but you might still be able to find them on  eBay. You can see the amazing new Emperor’s Children & Thousand Sons in there; I remember thinking to myself, “wow, I love these models but I’d never want to paint that many colors.” 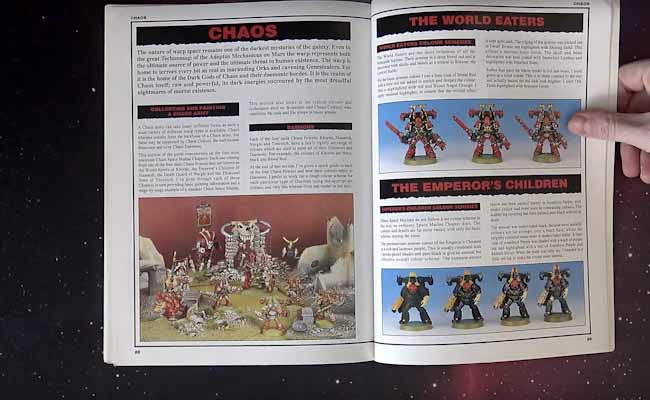 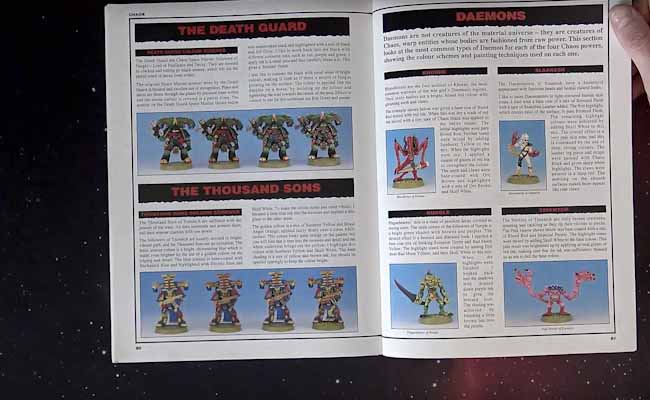 There are some banners in the back that you could copy and print. This is still a great resource with a lot of solid color theory in there. Most of the paint schemes still match up to some of the stuff they’re doing today. So if you see a color scheme you can probably just Google the name the paint was changed too.

Thankfully you don’t have to bribe the store wizard to show you how to paint any more; (then all the does is teach you dry brushing – I’m not bitter)… there is this thing called the internet now. 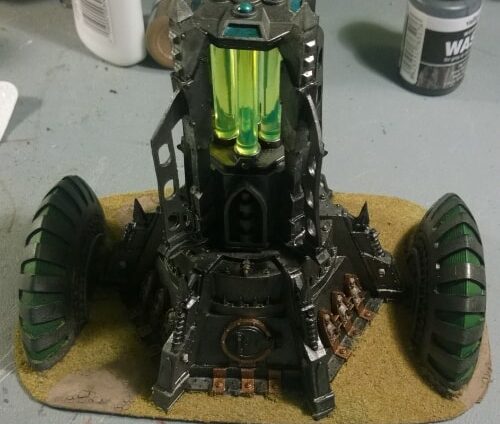 NEXT ARTICLE
Go, Go, X-Wing Rangers: Star Wars Meets Power Rangers! »
If you buy something from a link on our site, we may earn a commision. See our ethics statement.