LORE – What Can’t The Space Marine Land Raider Do? 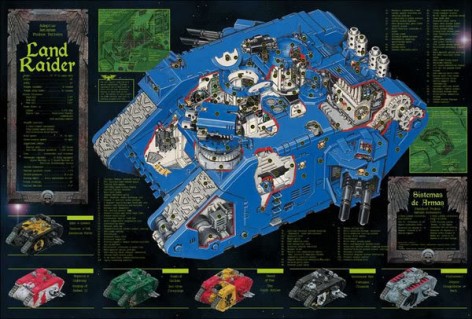 Strike the rune of activation, and come see the most iconic tank of the Astartes. There isn’t much the Land Raider can’t do!

Lore via our friends at Lexicanum

The Land Raider has its origins in the Dark Age of Technology, when humankind expanded out of its home system. Its construction method was incorporated into the great STC system, allowing it to be built locally by colonists even if they lacked any great technical knowledge. With the widespread breakdown of human civilization during the Age of Strife, production of the vehicle ceased 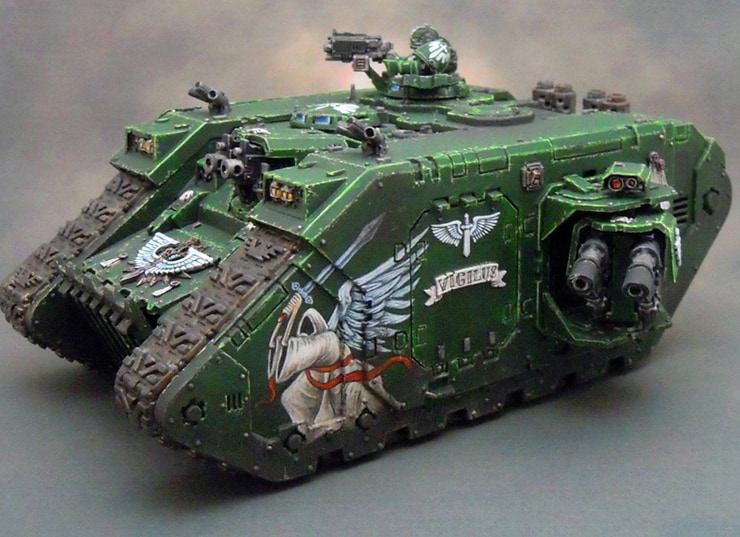 During the Great Crusade the Land Raider STC design was rediscovered, allowing their manufacture. The discoverer is commonly believed to be the Techno-archaeologist Magos Arkhan Land who, at the very birth of the Imperium, is said to have rediscovered the STC designs hidden beneath the surface of Mars. These vehicles were incorporated into the arsenals of the Imperium’s forces, used by both the Space Marine Legions and the Imperial Army. Such was the demand for the Land Raider that an entire Forge World, Anvilus 9, was devoted entirely to Land Raider production, supplying thousands upon thousands of Land Raiders to the Emperor‘s holy forces.
However, at the outset of the Horus Heresy, Anvilus 9 along with other Forge Worlds were seized by the Dark Mechanicum aligned with Horus, while others chose to secede from the Imperium and remain neutral. This would prove to be a terrible blow to the Loyalists as their supply of Land Raiders began to dry up, especially since, in sufficient numbers, Land Raiders can take on and destroy even Titans. With the dark clouds of the rebellion drawing closer to Terra, the Emperor ordered that all Land Raiders still in loyalist service were to be transferred and used exclusively by the Legiones Astartes, who were at the forefront of the fighting. The Emperor was never able to annul the order, and consequently, even after the Heresy, the use of the Land Raider remained exclusive to the Space Marines.

The Land Raider in the 41st millennium

Land Raiders are used by Space Marines as well as by their counterparts in the Traitor Legions, who have continued to employ the vehicle after their defeat and exile.
Since its rediscovery over ten thousand years ago, newly discovered STC information and modifications to the original design have produced different marks and variants. Most of these variants have been recognised by the Priesthood of Mars. Some of these are the Land Raider Crusader, Land Raider Helios, Land Raider Prometheus, Land Raider Ares, Land Raider Redeemer and Land Raider Terminus Ultra.
According to the organizational guidelines laid down by the Codex Astartes, the Land Raider is only used by the 1st Company of a Space Marine chapter. However, some less orthodox chapters are known to use it more widely. The Salamanders chapter uses an altered version of the Codex Astartes with 12 squads in the 1st company instead of 10, increasing the maximum number of Land Raiders available to 12.
Land Raiders may also be formed into Armoured Spearheads, designed to punch holes through enemy lines and allow penetration into their rear areas.

The Land Raider is armed with a hull-mounted twin-linked heavy bolter and two side sponsons each with twin-linked lascannons. It may also be fitted with a pintle mounted storm bolter. Sponson weapons are controlled through a slaved remote targeting system, and aimed through multi-spectral optic periscopes located around the turret rings. The lascannons are of the Godhammer Kz9.76 design, requiring replacement barrels after 2000 shots.

The Land Raider uses a composite armour created by bonding layers in huge, high-pressure cookers, giving it a level of protection incomparable to most other Imperial vehicles. The first armour layer, in addition to structural supports, is constructed of adamantine. The second is a titanium/plasteel composite used to reinforce strategic locations, such as the assault ramp, front glacis and hatch doors. The next is a thermo-plas fibre mesh to absorb and dissipate high-energy laser weapons, followed by the first of two ceramite layers, designed to ablate against extreme heat and melta weapons. When combined, this armouring makes the Land Raider virtually immune to heavy artillery like Battle Cannons.

Power for the Land Raider is provided for by a Mars pattern adaptable thermic combustor reaction engine, situated in the rear of the vehicle. It is kept cool by a nitro-ammonium cooling system, and protected from malfunction and Daemonic possession by Adeptus Mechanicus manufacturing sigils and purity seals. The engine provides power for all of the Land Raider’s systems and can propel it up to an on-road speed of 55km/h.

Every Land Raider is equipped with automatic control systems known as a Machine Spirit. The Machine Spirit assists the crew in operating the tank and, in extreme circumstances, can operate the vehicle on its own. Perhaps the most famous example of this was Rynn’s Might which, despite lacking any crew, proceeded to kill an Ork Warboss and his followers before eventually being destroyed.

The Land Raider is hermetically sealed, allowing it to operate in outer space or at the bottom of an ocean. It also includes atmospheric sampling equipment, an air filtration and purification unit, and rad-counters for operation in hazardous environments. Each Land Raider also contains significant command and control equipment. The commander is able to monitor his unit’s bio-status and other information through Individual squad status screens, using information transmitted by their power armour through the vehicle’s communications dish. The commander also has access to a holographic tactical display and can directly interface with the Machine Spirit.
For security purposes, all controls are gene-coded to prevent their unauthorized use by the enemy. Other standard equipment includes a Searchlight and Smoke Launchers. Additional upgrades include Dozer Blades, Extra Armour, a Hunter-killer Missile, and a Multi-Melta.

The Land Raider has an impressive carrying capacity, either 10 Space Marines in Power Armour or 5 in Terminator Armour. Since it is hermetically sealed, the Land Raider has no fire ports for the embarked troops to use. The Space Marines can exit from three access points, two hatches located on both sides of the vehicle or a special front assault ramp for disembarking troops straight into combat. No matter what your tastes are model wise, there is a Land Raider for you!

~ Strike the rune of activation! 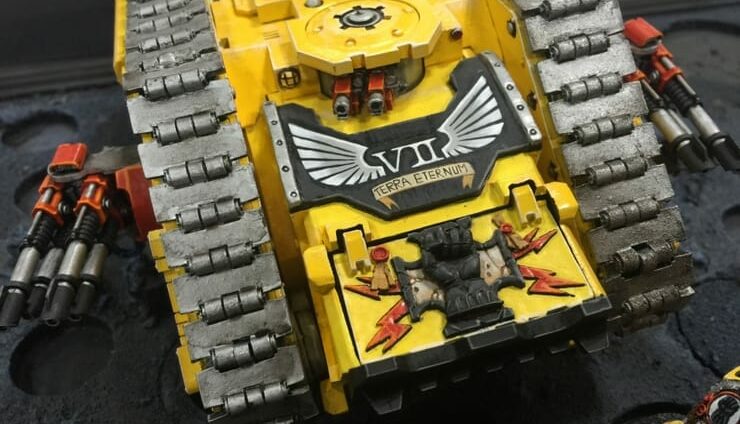 NEXT ARTICLE
The Defenders of Terra – 30k Armies On Parade »
If you buy something from a link on our site, we may earn a commision. See our ethics statement.