Fantasy Flight Games continues their wave of releases and news for Runewars with the release of the Latari Elves Army Expansion!

The Defenders of Aymhelin are finally here with the release of the Latari Elves Army Expansion. The Latari Elves have left the safety of the Aymhelin Forest to defend their homelands as the forces of Waiqar the Undying and the Uthuk Y’llan muster and ready themselves. The expansion contains 16 Deepword Archers, 4 Leonx Riders, an Aymhelin Scion, and the Latari hero Aliana of Summrsong. Also included are a collection of terrain pieces, tokens, and 12 upgrade cards. Combine this with the Core Set or the Runewars Miniatures Game Essentials Pack and players will be able to build and customize their Latari army to their personal fighting style. 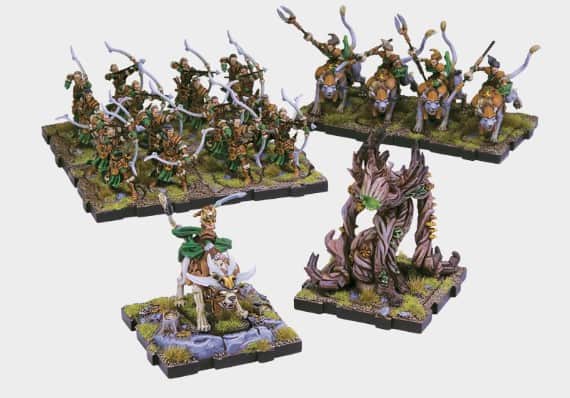 Aliana of Summersong is a Leonx champion and very few command tools can equal the her mobility and it features no less than five white modifiers that can be paired with any action. Not only does this give you amazing control of her but also opens up more tactics. During battle, she rolls a white, blue, and red die which gives her a wide spread of damage and surges. Add to that the fact that she automatically adds a mortal strike to every melee attack and damage is guaranteed. She comes several upgrade cards including Packleader’s Spear which adds Lethal 3 to the roll results. However, to use the upgrade again, she must kill the unit she is engaged with. 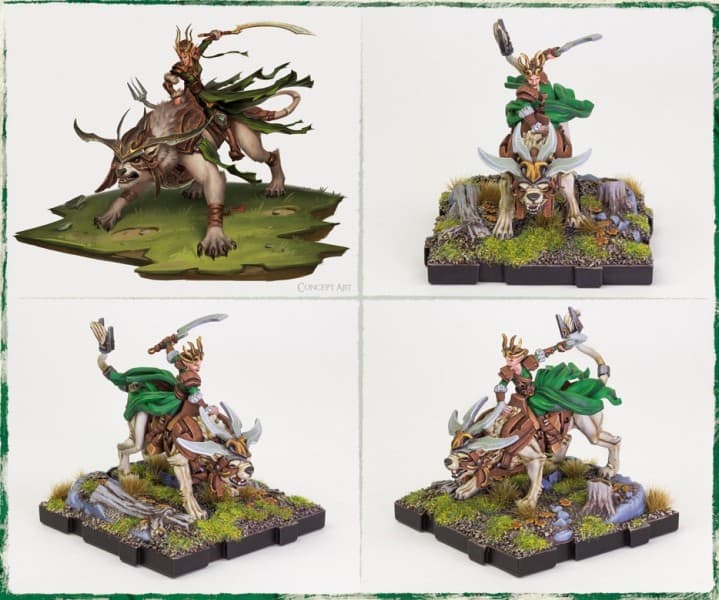 The Deepwood Archers practice until their bows are extensions of them. Their expansion pack comes with two trays of archers, eight archers in total. Their command tool allows them to stay way from enemy units and position themselves for the perfect shot. With two different march actions, they can move into position to fire then shift to line up more shots or evade. Several upgrade cards come included, such as Wind Rune which allows you use a special action modifier to perform a shift with a speed equal to the number of natural runes on the battlefield. 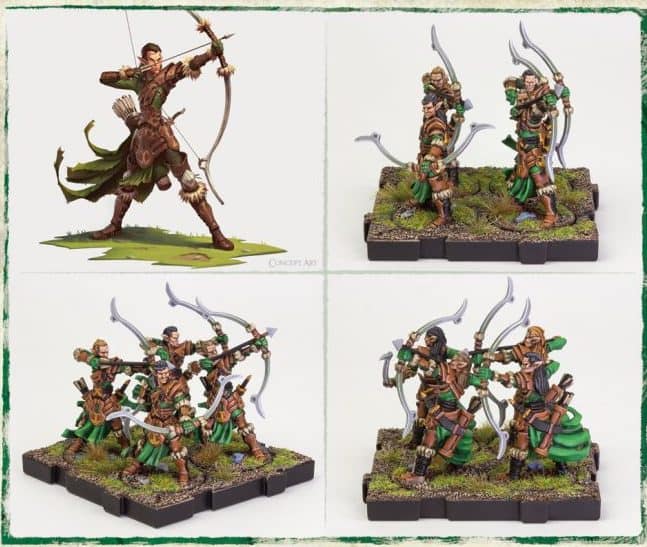 The Aymhelin Scions march alongside the Latari to defend their homes and their expansion pack comes with two Scions with two trays and eight upgrade cards. The Scion’s unit ability  allows it to spend two surge tokens to give the defender a stun token which can then be used to deny that unit a modifier. Enemy unit(s) receive an immobilize token when a Scion collides with it. This works with the powerful melee attack that they possess that uses one red and two blue die. Scion units can be fielded with one tray for fourteen points, two trays for twenty-five points, four trays for forty-two points, or six trays for sixty-two points.

The Aymhelin Scions can also be used as an upgrade within larger infantry units. The Support upgrade uses the Overgrow mechanic. Essentially, when a unit contains the Scion Support upgrade, it can receive a free shift for added mobility. The Frontline Scion upgrade can be exhausted and allows an attacking upgraded unit to add a stun token to the defender. With two surge symbols during an attack to ready the upgrade card for use once again, giving the upgraded unit the ability to take away an opponent’s modifiers as well as distribute damage. 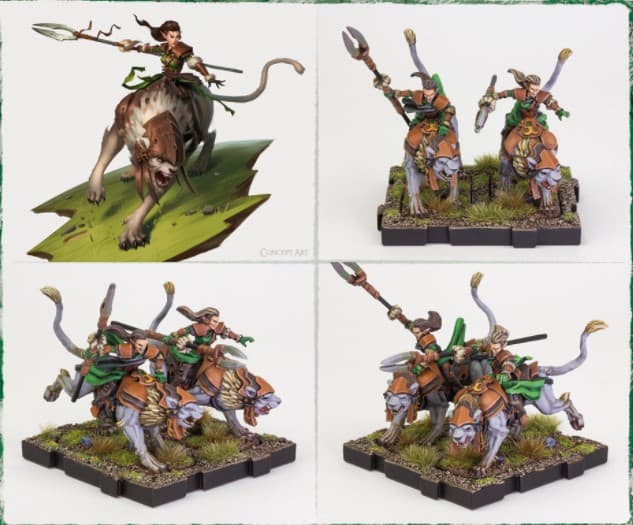 No other unit symbolizes the primal, wild nature of the Verdelam more than the Leonx Riders. They are the cavalry unit for the Latari Elves and will be led into battle by Aliana of Summersong. They are agile and adaptable. None of their actions detract from their speed. When attacking, they can roll one red and two blue die for better odds of rolling two surges. This can grant them an additional hit and kill of an enemy unit or wound an enemy hero. They can even use their two surges for a unique action, a mortal strike, and inflict a wound. One upgrade card, Raven Tabards, decreases the initiative of the command tool’s blue actions by one. Employing this upgrade can give Leonx Riders the freedom to race across the board earlier in the round and strike at distant enemies right away, or to outflank an enemy. 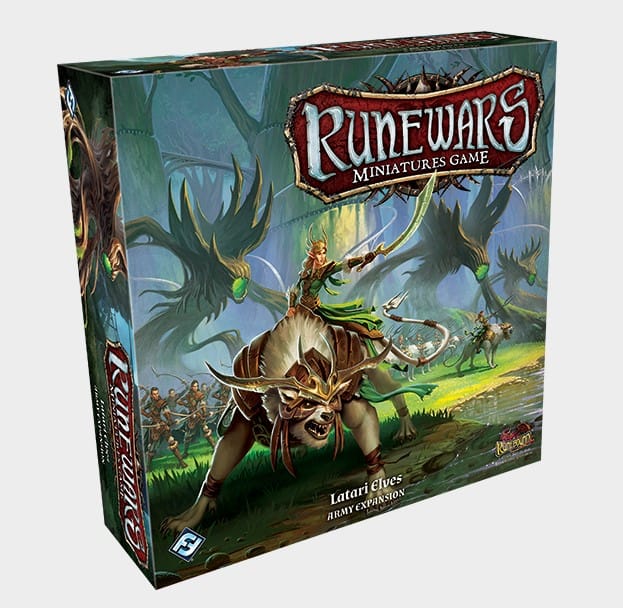 The Latari Elves Army Expansion is available online and at your local retailers. Be sure to also check out our vid on how to jump into Runewars! 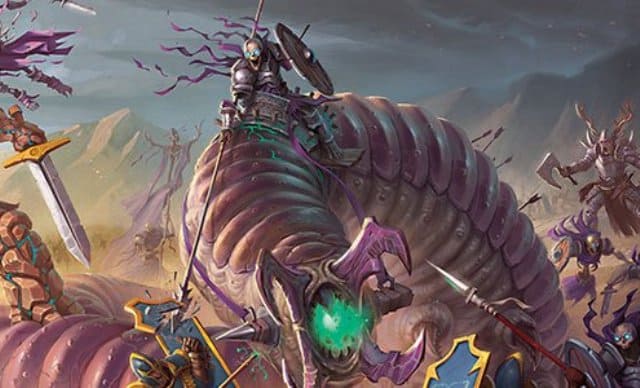 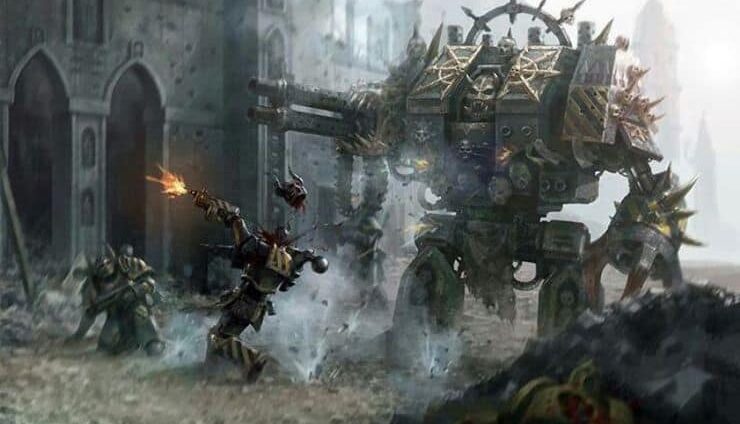 NEXT ARTICLE
Iron Warriors Daemon Prince: Conversion Corner »
If you buy something from a link on our site, we may earn a commision. See our ethics statement.