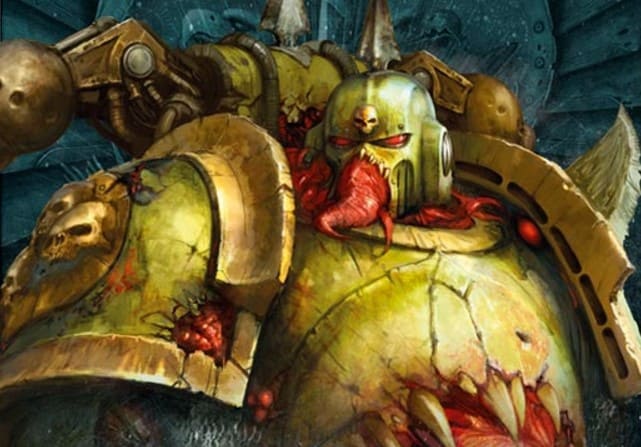 In addition to the Astra Militarum codex we’re also seeing four new releases for the Death Guard and a new battlefield box coming out next week.

Games Workshop just gave us a big teaser on what’s due to come out next week. Guard fans will be happy to get their hands on a new codex, but fans of Chaos will also be happy to see four new models coming out. Let’s see what Games Workshop had to say about the new battlefield box and Death Guard models going up for pre-order next week.

Made up of modular card tiles – designed to be interchangeable to vary your battlefields – and featuring push-fit ruins, Moon Base Klaisus is great for gamers looking for an easy way to make sure they’ve got a cool-looking place to play, wherever they are. The ruins themselves are designed to fit in with both the Sector Mechanicus and Sector Imperialis terrain, meaning if you do decide to build a more bespoke gaming board you’ll be off to a head start. 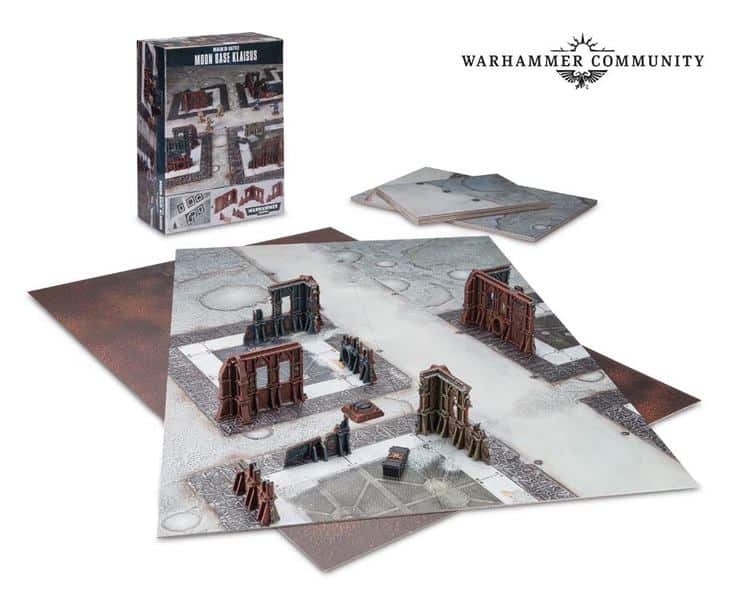 This is the first time we’re seeing a 6’x4′ battle mat coming out of Games Workshop. The Khorne Dominion and City Ruin battle mats were both only 4’x4′, and they came out at a price of $85 each. Are we going to see a little bit of a price increase? Whether or not we do, it’s still nice to see Games Workshop putting out a full size battle mat.

Now, on to the new Death Guard minis. We’re finally getting the releases of the Tallyman, Plague Surgeon, and Plagueburst Crawler. So let’s take a look at their rules and what we know about them so far. 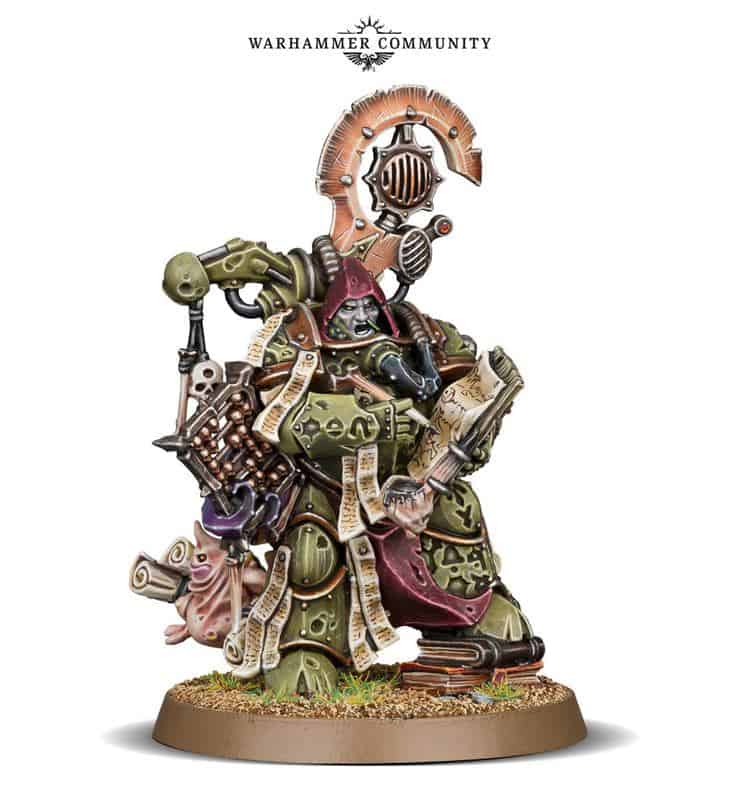 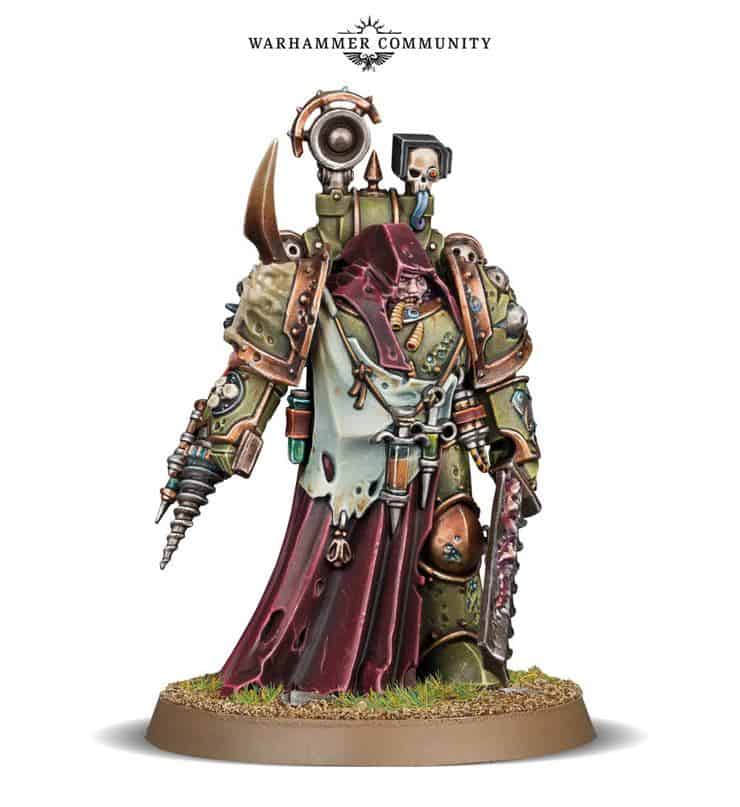 The Plague Surgeon is a single model unit. It comes equipped with a Bolt Pistol, Bale Sword, Blight Grenades, and Krak Grenades. He has a 5″ Move, WS/BS 3+, Strength 4, Toughness 5, 4 Wounds, 3 Attacks, Leadership 8, and has a 3+ Save. Tainted Narthecium allows you to re-roll 1’s for you disgusting resilient saves for firendly Death Guard Infantry models within 3″ of this model. Gene-seed Thief adds 1 to all hit and wound rolls made for this model in the Fight phase when targeting Adeptus Astartes Infantry or Adeptus Astartes Biker units. 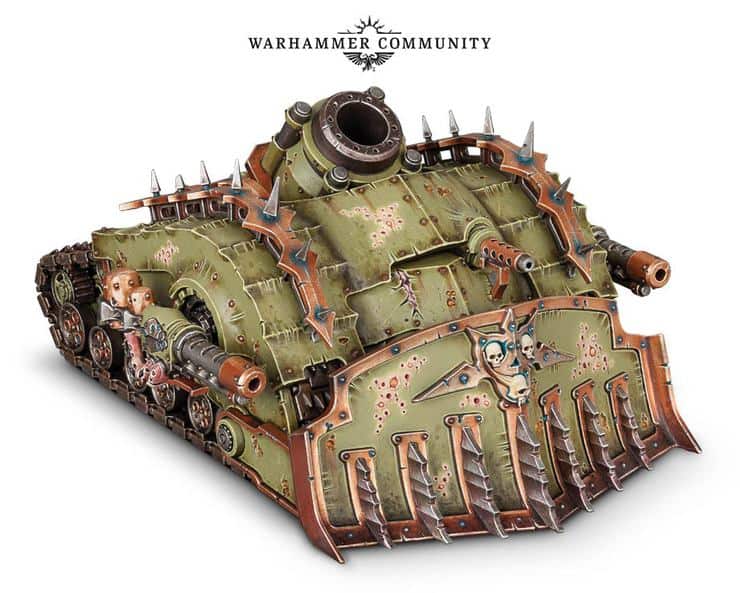 Plagueburst Crawler costs 110 points with Strength 7, Toughness 8, 12 Wounds, 3 Attacks, Leadership 8, 3+ Save. It comes equipped with a plagueburst mortar, heavy slugger, and two plaguespitters. The plaguespitters can be replaced with two entropy cannons which have a 36″ range, Heavy 1, Strength 8, AP -4, and does D6 damage. The plagueburst mortar has a 12″ to 48″ range, Heavy D6, Strength 8, AP-2, D3 Damage, and can hit units that are not visible to the model 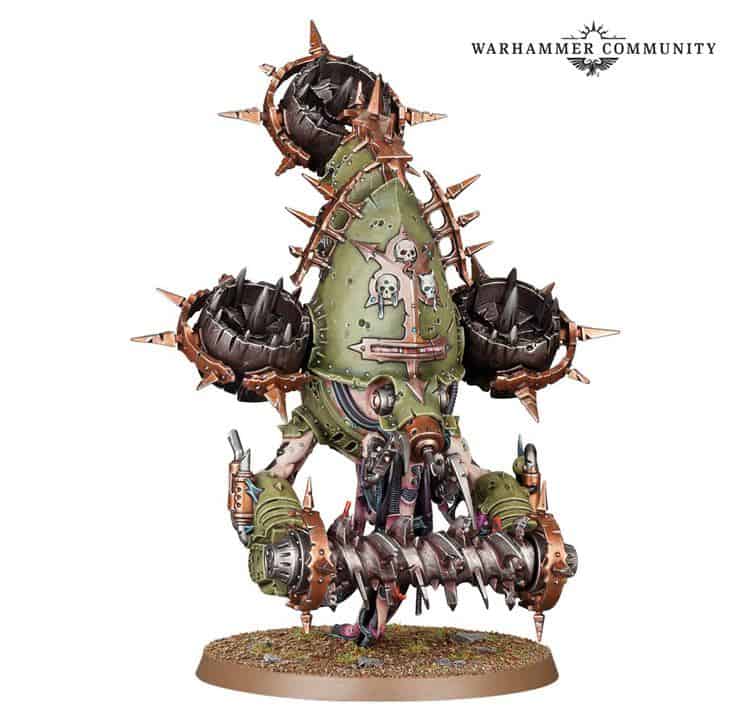 We already have a good idea on how these new models are going to play on the tabletop, but now we’re finally going to get to put the new models into play. But, what good is having new models if you don’t have anywhere to play? The new Moon Base Klaisus, battlefield in a box,  is going to make it really easy for you and your friends to set up and play anywhere you have a 6’x4′ table space. Make sure you check back in with us later this week for the price of all these new pre-orders.

What do you think about the new battlefield in a box and Death Guard models? Are you going to be picking any of these up next week? 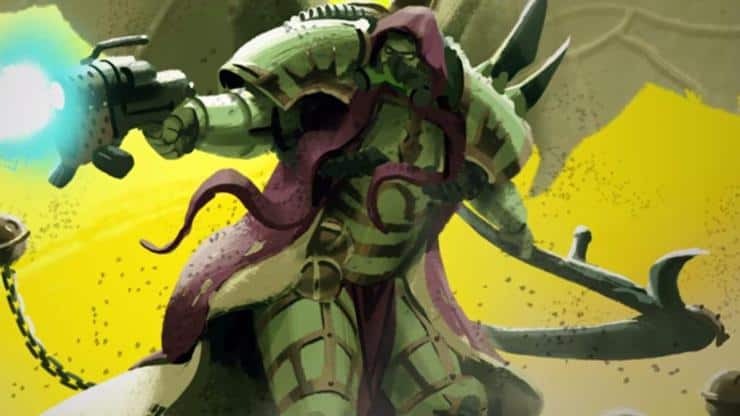 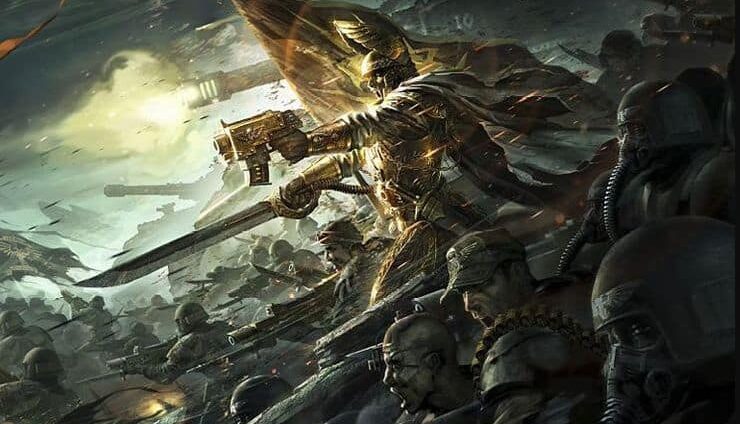 NEXT ARTICLE
Imperial Guard Armored Division: Armies On Parade »
If you buy something from a link on our site, we may earn a commision. See our ethics statement.