The Lord of Plagues leads his grenade throwing Death Guard against the forces of the Imperium. Who will prevail in this epic battle?

Austin and Felix go head to head in a $500 army battle, featuring Death Guard vs. Space Marines. These two armies go head to head in the Eternal War mission “The Relic”. Deployment is using the Spearhead Assault. Felix deploys first with the Space Marines and the Death Guard gain +1 to the roll for first turn since they finished setting up first. Austin decides to first. TO see the entire battle report, be sure to scroll down and press play on the video below! 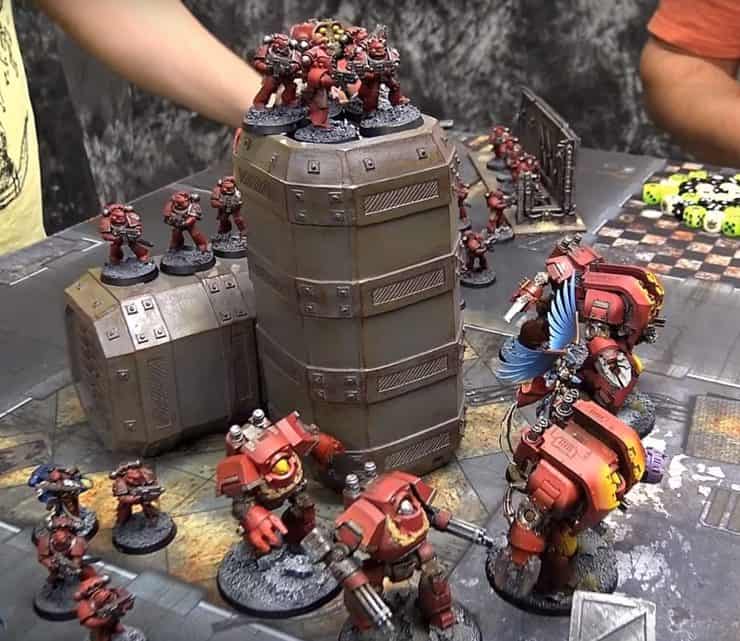 Felix’s Imperium Army, built as Blood Angels but playing as Ultramarines due to lack of special rules at this point, stars a Knight, 2 Leviathan Dreadnoughts, heavy bolters and 2 squads of regular marines, Librarian, Apothecary, Cataphractii squad and Cataphractii Captain acting as Warlord, Devastator Squad, 3 Contemptor Dreadnoughts, and Saint Celestine. 1 Dreadnought and the marines themselves are based i the Betrayal at Calth box set, costing $160. The Leviathan Dreadnoughts cost $75 each. Saint Celestine costs $35. The 2 Contemptor Dreadnoughts are $60 each. The Librarian is from Dark Vengeance but is priced at $20. The Knight is $160, which does not include the paint job, which was done by Den of Imagination. 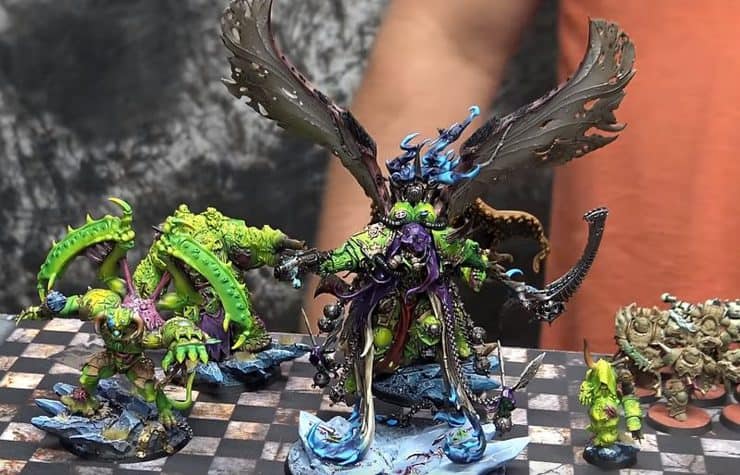 Austin’s Death Guard features the Primarch Mortarion himself plus Death Guard Nurgle Daemon Princes, Biologus Putrifier, Plague Marines, Typhus, Malefic Lords, and Plague Bearers. The Malefic Lords were custom built and are $10-15 each. The fifty Plague Bearers are $30 per ten, total cost being $150. The Plague Marines are about $120 for twenty. Typhus and the Biologus Putrifier are $20 each. Mortarion costs $140. The three Daemon Princes cost $40 each. 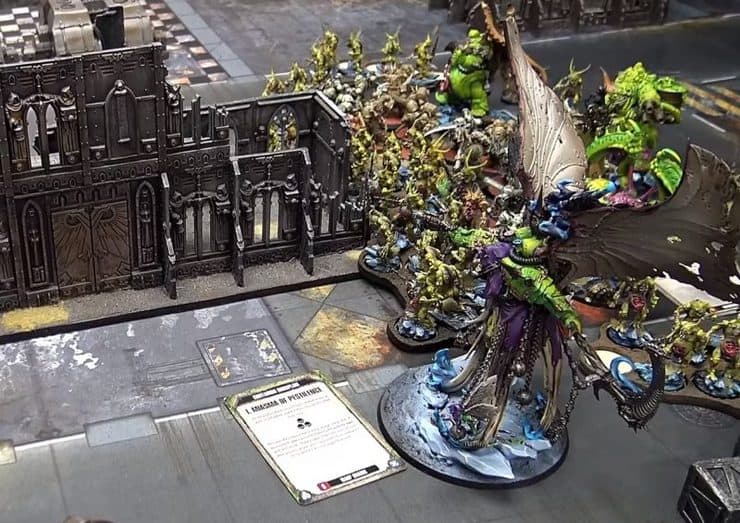 Turn 1, Nurgle is looking to get to the relic as soon as possible and moves forward, plus spends a command point to use Cloud of Flies, allowing them to be shrouded from targeting unless they are the closest models. Psychic phase, Miasma of Pestilence is cast on Mortarion, causing all hits against him this turn to be -1 hit. Smite causes 1 mortal wound on one of the Dreadnoughts. Shooting phase, the Leviathan Dreadnought is targeted again by Mortarion but does not cause any more wounds. 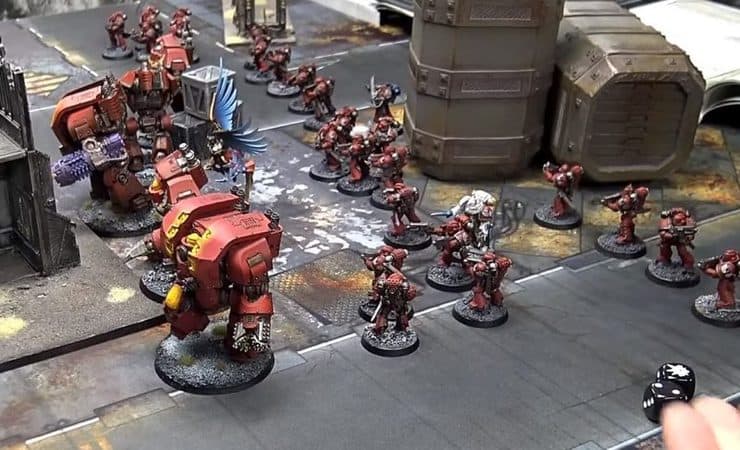 Felix’s turn 1, is heading to get the relic as quickly as possible, using Saint Celestine’s Act of Faith to grab the Relic and move away quickly. In the psychic phase, Psychic Fortress is cast on the forward Leviathan Dreadnought, Null Zone is cast successfully, preventing enemy units from using invulnerable saves when within 6″ of the caster. Shooting phase sees the marines firing at Mortarion, getting 3 wound against him. 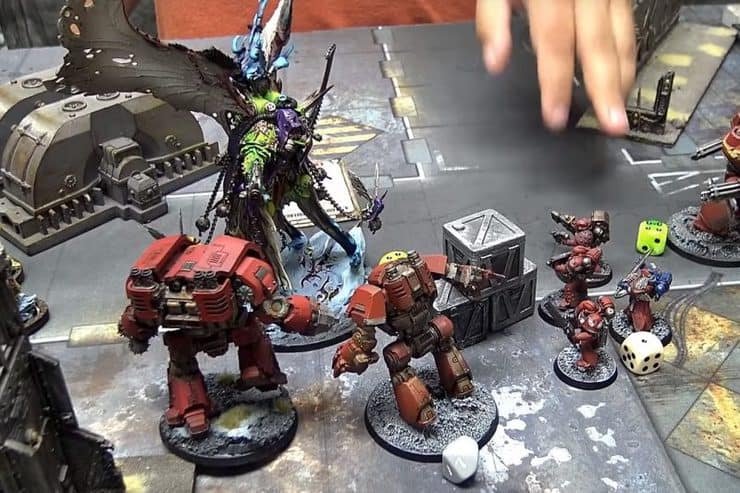 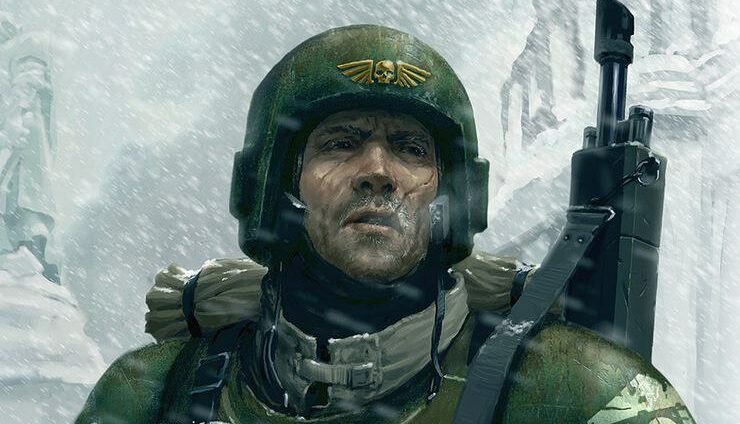 PREV ARTICLE
« What the DG FAQ May Mean For Guard Codex 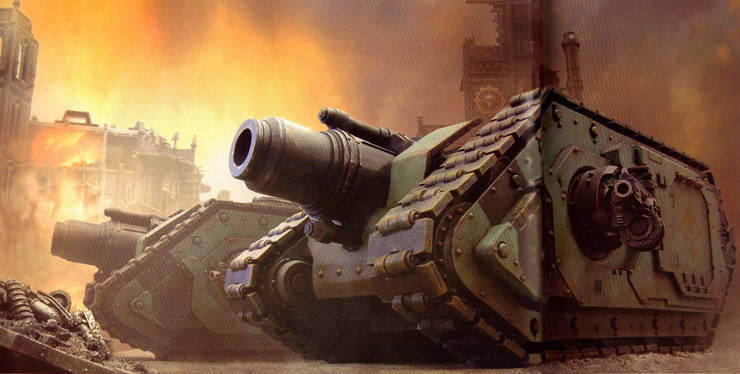 NEXT ARTICLE
New Space Marine Super Heavy Tank SPOTTED »
If you buy something from a link on our site, we may earn a commision. See our ethics statement.