Is Shadespire Really That Good? UNBOXING 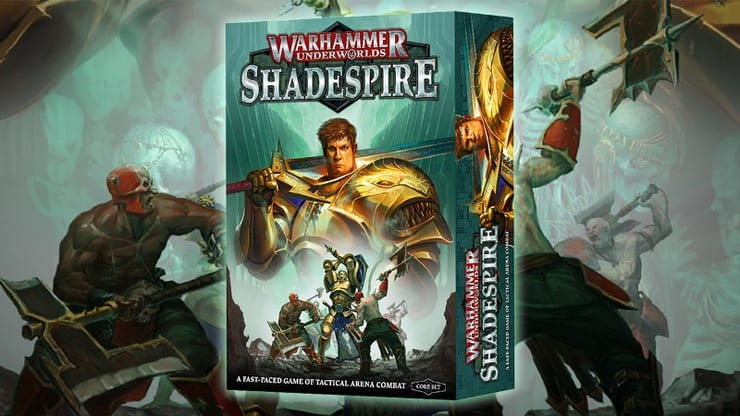 Checkout GW’s game designed to entice competitive players with is fast deckbuilding MOBA style of play! But is it really that good?

Warhammer Underworlds: Shadespire is a much anticipated release that has had a lot of time and effort put into it by Games Workshop. Shadespire is a fast-paced tactical arena combat game, not a new version of Mordheim. Think of an analog-MOBA with deck building and you have a better understanding of what Shadespire is. Here is a sample of our quick and dirty review to give you the lowdown on what you can expect to see in this standalone release.. 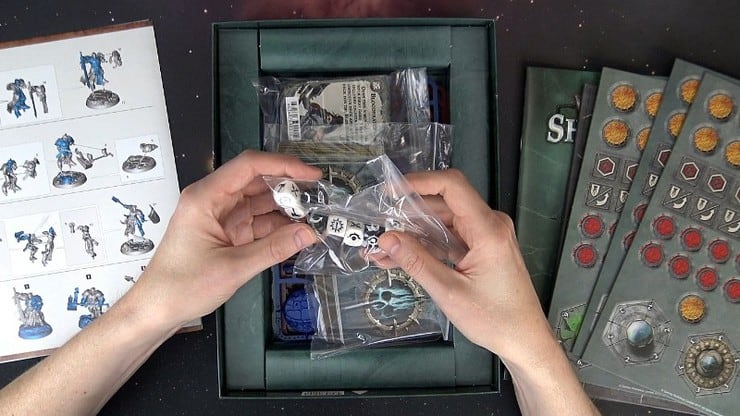 Shadespire retails for $60 and does come with two sets of sleeve covers that are sold separately. Everything you need to get started is inside, from a double-sided, high quality game board, multiple pre-built card decks of power and objectives, dice, tokens, and a rule book with a quick start guide. The miniatures included are easy-to-build ‘push fits’ on two sprues, one sprue for the Stormcast Eternal warband and one for the Khorne Bloodbound warband. 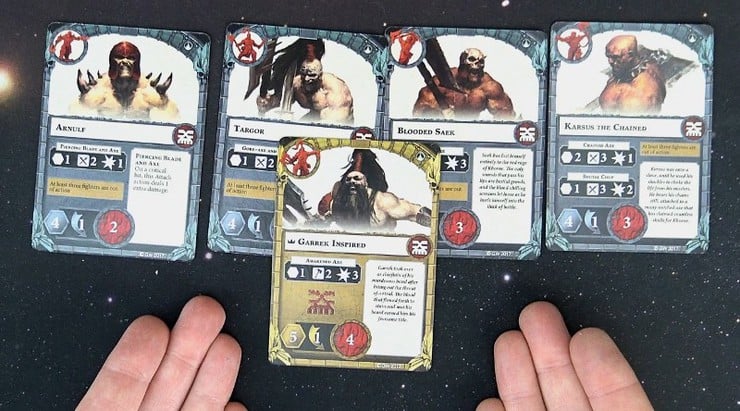 Each warband will have their own deck of cards that include stat cards for each character in the warband. What is interesting about these cards is that if certain conditions are met, they can level up and become a powered up version. The rest of cards are separated into two different deck: Power and Objectives. The Powers will be what abilities you will be using and the Objectives are essentially what you need to accomplish to obtain Glory Points. You can also earn said Glory Points by incapacitating enemy characters.

Two more factions are set to enter Shadespire: Sepulchral Guard and Ironskull’s Boyz. The rule book also highlights two other factions, Fyreslayers and Skaven. However, but give no clue as to when they will be released.

Our very own Rob Baer dives into the deck and other aspects of Shadespire in the full review video below. 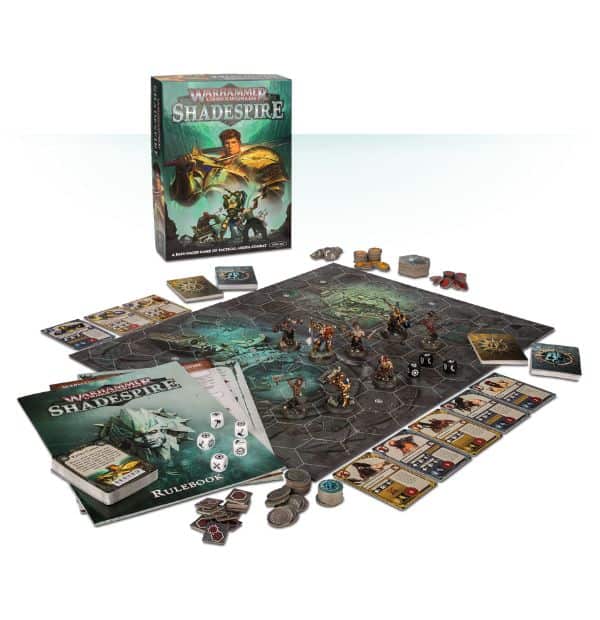 Warhammer Underworlds: Shadespire is an action-packed combat game for two players. Build your warband, construct your deck, and defeat your rivals.

Shadespire was once a city of wonder and magic, a mercantile metropolis whose rulers defied death, to the fury of Nagash. This fury was made manifest in something worse than destruction – drawing upon the mysterious power of the shadeglass that gave the city its power, Nagash tore away the light and glory of Shadespire, leaving it a twisted reflection of its former splendour. Those adventurers foolish enough to set foot within its walls are trapped, with all hope seemingly lost. Yet not all will accept their fate without a fight…

In Warhammer Underworlds, you and your opponent pick a warband – 2 are included in this box – and build a deck of power and objective cards. After placing your warband on the hex-tiled game boards, you take turns making actions – movement and attacks – until 3 phases are played. Between actions, you can use the power cards to introduce effects and reactions that can swing the battle in your favour; building the best deck you can and using cunning to deploy these abilities at the perfect time is the secret to mastering the game and dominating your foe. Merely vanquishing your opponent’s warband does not guarantee victory – capturing objectives, standing your ground, making the best tactical choices and deploying the right cards at the right time will gain you the glory points you need to win!

Once you’re familiar with the rules, games will take around 30 minutes – you’ll always have time for a rematch.

Everything you and a friend need to play games of Warhammer Underworlds is included in this box. Contained within:

– A Stormcast Eternals warband, made up of 3 push-fit, blue plastic Liberators (Angharad Brightshield, Obryn the Bold and their leader Severin Steelheart);
– A Khorne Bloodbound warband, made up of 5 push-fit, red plastic Bloodreavers (Karsus the Chained, Blooded Saek, Targor, Arnulf and their leader Garrek Gorebeard.) Both of these warbands are Easy To Build, with no glue necessary and a comprehensive, easy to follow construction guide;
– A 32-page rulebook, including the story of Shadespire’s rise and fall, and all the rules you need to play; – A quick-start sheet, featuring a brief introduction to the game;
– 2 double-sided game boards, featuring hexes and objectives;
– 2 pre-built decks of power and objective cards, for use with the included warbands;
– 8 double-sided Fighter cards, providing the stats and information needed for the fighters in each warband at a glance;
– 5 attack dice and 3 defence dice;
– 9 double-sided objective tokens;
– 1 Katophrane Artefact token;
– 2 Shardfall tokens;
– 30 wound tokens;
– 46 double-sided glory point tokens;
– 15 double-sided move and charge tokens;
– 15 Guard tokens;
– 8 activation tokens.

Warhammer Underworlds has an intense, fast and fun core ruleset, but the book contains a host of extras – new game modes, competitive and multiplayer rules:

– Matched Play: designed for competitive play, this is a set of rules that level the playing field to the finest degree – perfect for fast, friendly rivalries and tournaments;
– Capture the Artefact: use the included Katophrane Artefact token as a discovery to battle over – glory points are awarded for holding it, but your opponent will be sure to take it by force;
– Multiplayer games: extra rules that allow you to combine 2 core sets of Warhammer Underworlds to create 3-or-4-player games, with clarified rules for resolving attacks and adjustments to victory conditions.

Warhammer Underworlds: Shadespire is available now online and in local Games Workshop stores. Be sure to press play on our quick and dirty unboxing and review video below for the full review.

For more on Warhammer Underworlds: Shadespire and all things Age of Sigmar, visit Games Workshop! 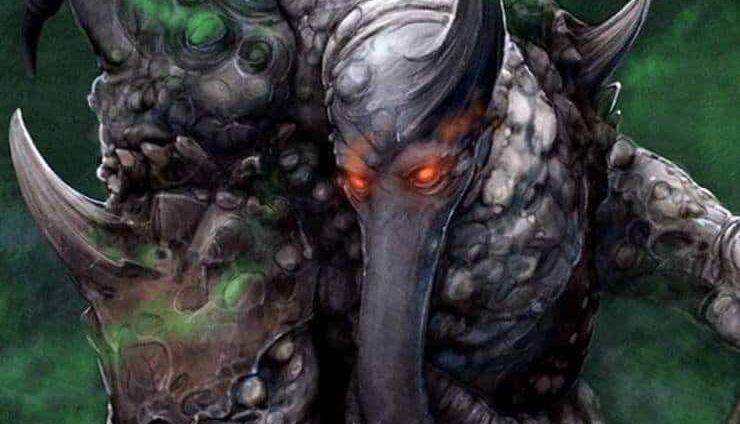 NEXT ARTICLE
This Week’s GW Pre-Orders & Prices Confirmed »
If you buy something from a link on our site, we may earn a commision. See our ethics statement.