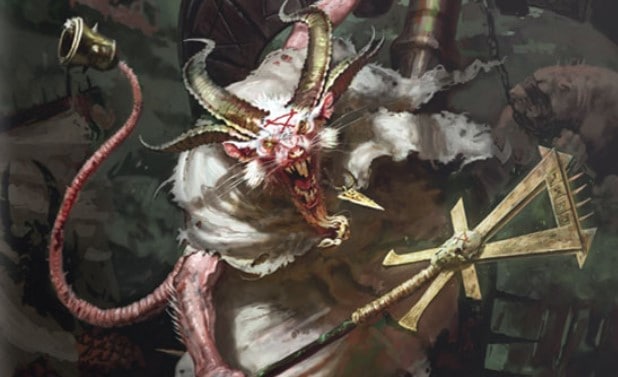 We’ve seen a few rules previewed for Skaven units and now it’s time to look at the rules for their Endless Spells and terrain! Check out the latest!

Warhammer Community scratched the surface on some of the Skaven rules we’d find inside the Battletome that’s right around the corner for us earlier. But they also gave us a teaser of the new Endless Spells and how they’ll behave in-game.

Take a look at the latest rules and previews on the Skaven so far. 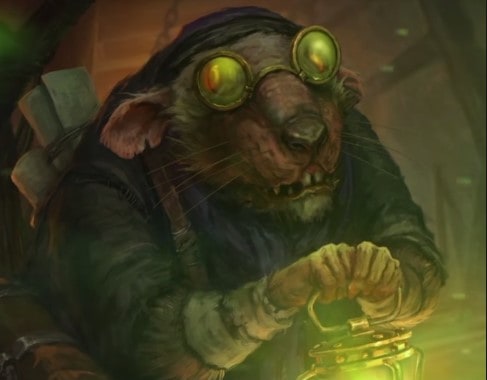 The Skaven are a race of rat-people that are divided into different clans all specializing something. They worship this “Chaos God” called the Great Horned Rat. Now Skaven aren’t the smartest thing in the Realm, however, their numbers are beyond counting and their determination is unshakable. 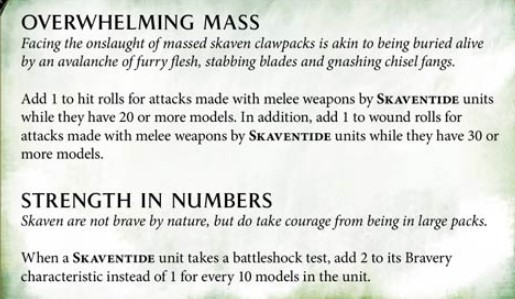 Looking at the Overwhelming Mass ability, it’s similar to the older stock Clanrat rules. Your units became even more killy when they were blobbed together. Just don’t expect your blobs to last too long..They’re wearing T-shirts.

Skaven Leadership has been historically awful so Strength in Numbers helps keep your models from running away with a hefty +2 leadership for every 10 models. You’ll still be having droves run, however. 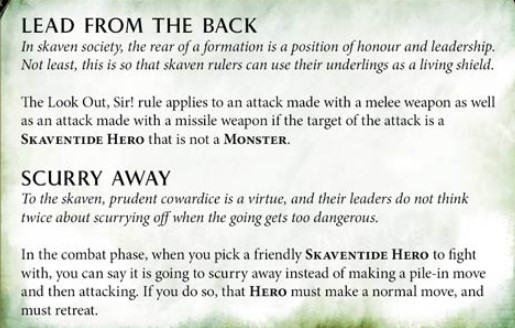 Skaven heroes are almost always in it for themselves and would rather watch their “friends” take the hit.  Normally, you can perform a Look out sir! only from shooting attacks. However, your Skaven hero can duck behind a few Clanrats in melee and not even take a scratch!

Despite common belief, the Skaven are no fools and they know when to pick a fight. If your Skaven hero finds himself in a bad situation, he can Scurry away from combat by retreating out of normal phase sequencing. 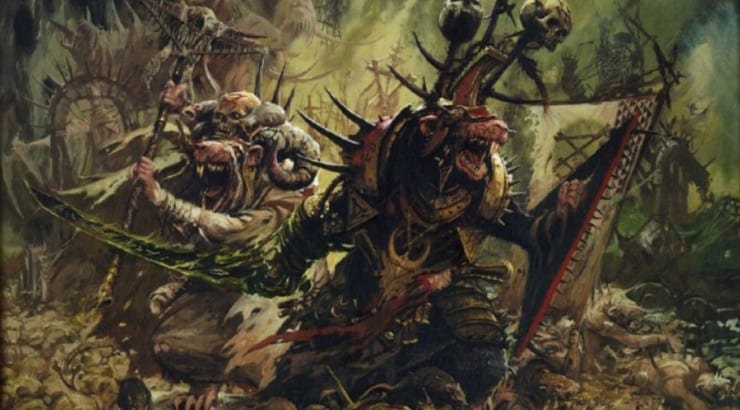 Clan Pestillens and Skryre are going to look similar from the General’s Handbook. However, the other Clans are getting all new support!

Clan Verminus are the backbone troop supplier to all the Clans. If you bring Clawlords as heroes, you’ll be able to give each one a command trait (up to six total). The only stipulation is that they all have to be different and can’t have more than one. However, you can use any command ability even if they aren’t your general. The Verminus Clan is bringing out all of their Warlords!

Moulder are the Skaven that take pride in genetically experimenting with their own kind. Of course, they have some nasty creations that they aren’t afraid to unleash. So, for each Master Moulder units (probably Moulder Hero) you’ll be able to pick a Fighting Beast (probably something like a Hellpit Abomination). Then, you can add D3 to the wounds characteristic of the model and re-rill hits of 1 for melee attacks. 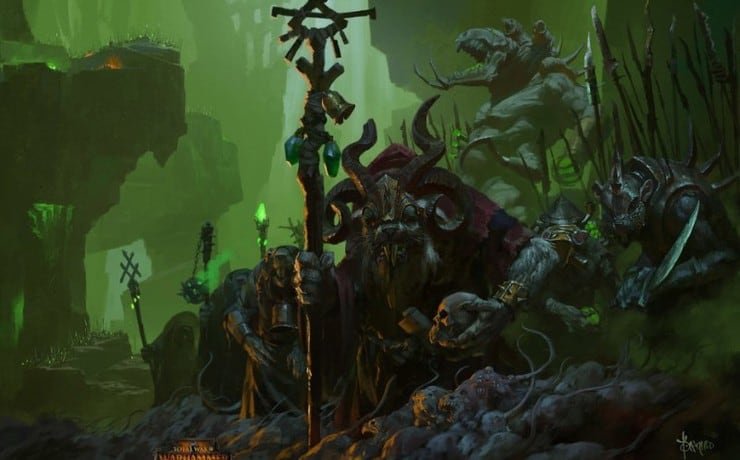 Skaven will have two disciplines to draw their power from. One being Ruin and the other, Warpvolt. 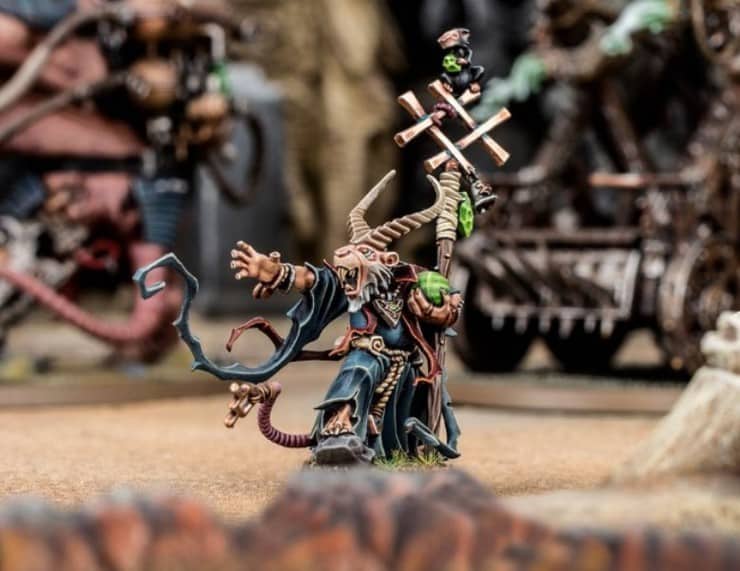 Looking at the Grey Seers, they pull their power from the Ruin lore. Splinter is a new spell that goes off on a 6. It’s got a very short range of only 6″ but you can pick a model and roll a D6. If you roll higher than its wounds characteristic, the model is slain. Realistically, you’ll only be able to pick off a weaker character if you’re lucky. You can also snag a multi-wound model like a Stormcast Eternal battleline consistently.

The Warlocks of the Clans Skryre can use More-More-More Warp Power! This wacky spell goes off on a 7 and you can pick a friendly Skryre unit within 12″ of the caster. You can reroll hit and wound rolls for that unit into your next hero phase. However, they also take D3 mortal wounds. If you take a squad of three Stormfiends with the Flayer Gauntlets, you’ll be able to mulch right through your enemies. So what if they take a couple of mortal wounds? They’ll keep pounding! 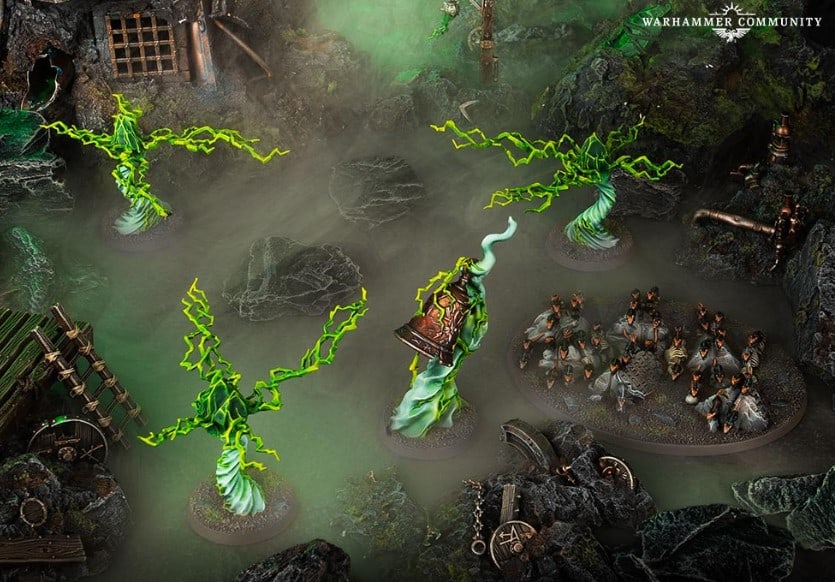 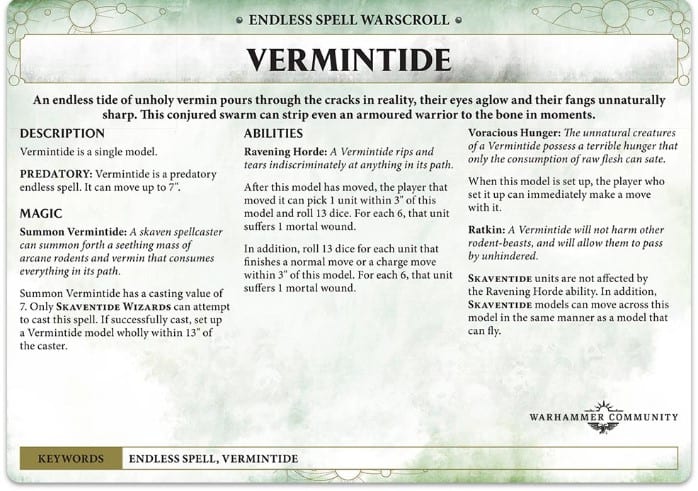 Jumping right in, the Vermintide is exactly what it sounds like. A tide of Vermin! This is essentially a mortal wound ball that can move 7″ when it’s cast. Whenever an enemy unit comes within 3″ of the spell, you get to roll 13 dice and they take a mortal wound for every 6+. Perhaps the best part about the spell is that your Skaven are immune to it! 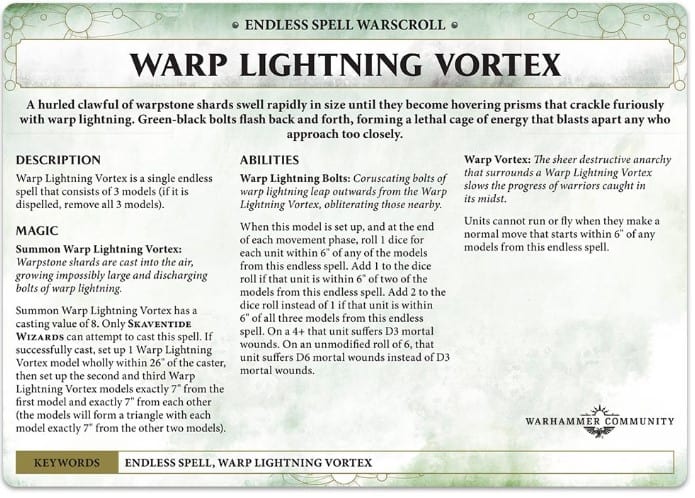 The Warp Lightning Helix are the three tornado-looking models lifting up some Warpstones. This spell is probably the weirdest out of all the Endless Spells we’ve looked in AoS so far. You have to position three different models all within 7″ of each other and specifically in a triangle. Depending on where the enemy units move and how close they get to the models depends on the severity of the mortal wounds they take. Plus, if you roll an unmodified 6 when seeing if a model takes a mortal wound, you get to do D6 wounds instead. 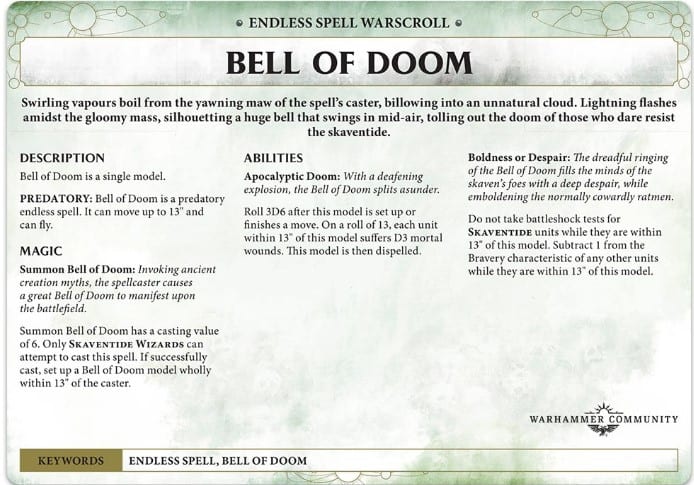 When you set this big ol’ bell up, you roll 3D6. If you roll a 13 or higher, you get to dish out D3 mortal wounds to every unit within 13″. On top of that, your Rats don’t have to take Battleshock tests and enemy units within 13″ are -1 to their bravery…then the spell dissolves and you get to do it all over again! 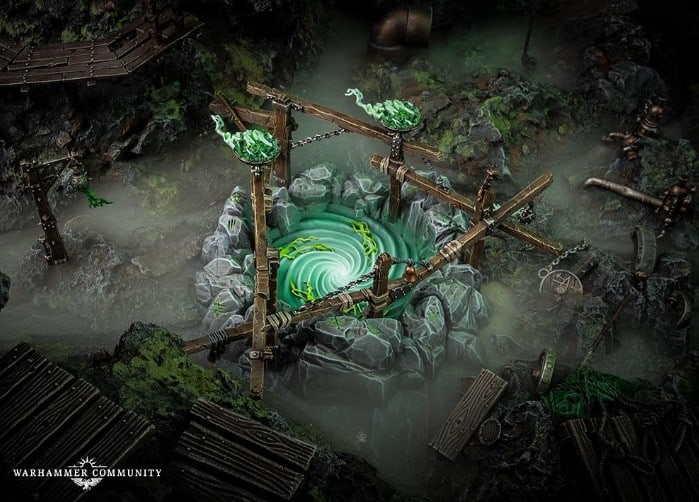 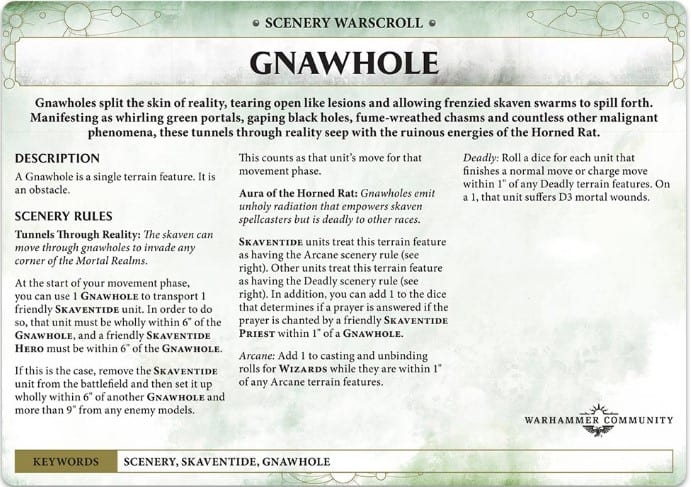 Skaven are experts at tunneling underground and emerging right in front of the enemy taking them by surprise. Skaven can use their terrain features called Gnawholes to get them from point A to point B relatively safely. Every time anything gets close to a Gnawhole, they run the risk of slipping in and taking D3 mortal wounds. Luckily for you, Skaven travel in packs so who cares if a couple die!

Ultimately, the Gnawholes are going to add an unreal amount of speed to the Skaven alliance. You’ll be able to send droves of rats to the frontlines in the blink of an eye.

Skaven are looking to be a real force to be reckoned with when you combine their sheer model count of Clanrats with the speed of Gnawholes. The enemy will hardly have time to react to one blob as another sprouts from the ground. What do you think about the Endless spells for Skaven? Do you think Gnawholes are going to be a necessity for the army?

Lets us know in the comments of our Facebook Hobby Group. 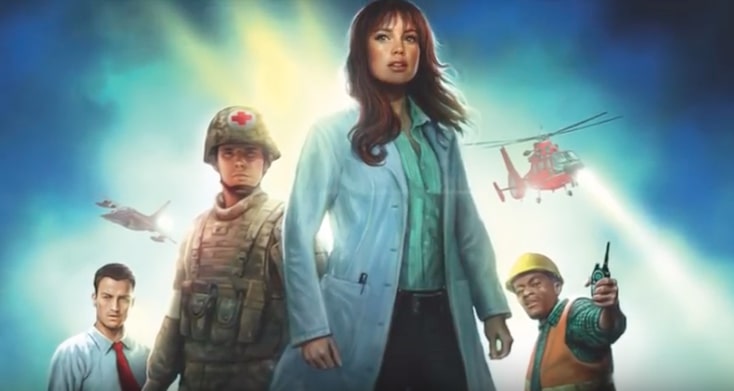 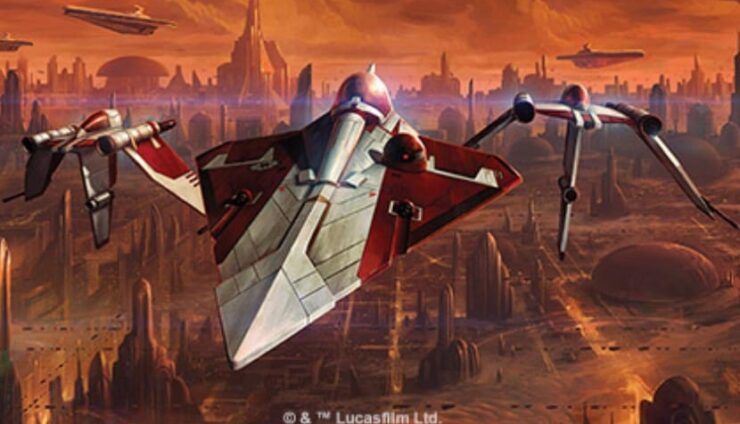 NEXT ARTICLE
New X-Wing Guardians of the Republic »
If you buy something from a link on our site, we may earn a commision. See our ethics statement.