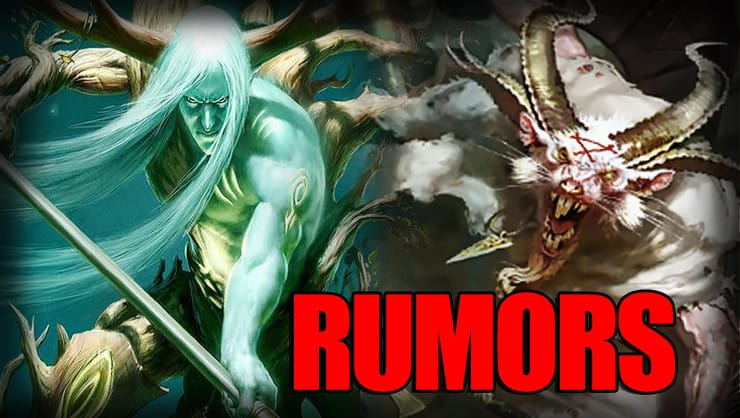 Rumors of a new AoS Skaven battle box were true, except they are pairing up with Sylvaneth for Echoes of Doom and getting new rules too!

We just got done seeing previews for new Sylvaneth and Skaven models during Warhammer Fest, and now it looks like they will be releasing side by side in a new box called Echoes of Doom.

This is the biggest line update they’ve basically ever had, with fast-moving bug models and the return of this lady…

Sylvaneth Lady of the Vines 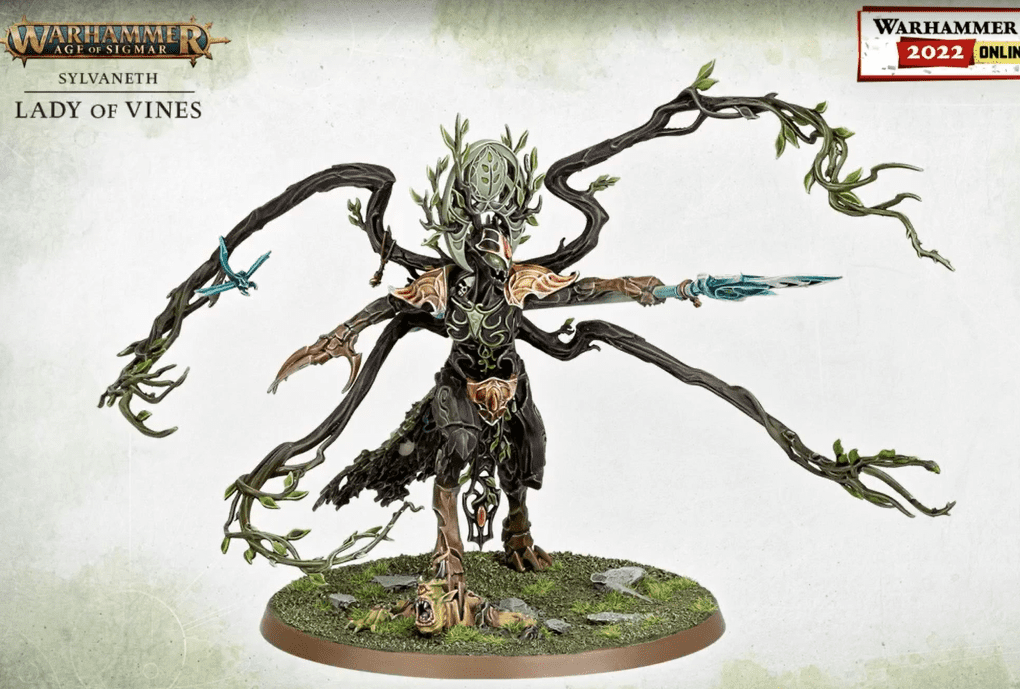 First up is this wild Lady of the Vines who has just recently been resurrected from events back in the Realmgate wars This is a pretty wild mini, and with how much lore is out there about this model, it will be really fun to play with!

After her untimely death in the Realmgate Wars, the Lady of Vines is back, thanks to the god-queen of the Sylvaneth – and a deep rage for all things that threaten the Sylvaneth smoulders in her thorny heart. 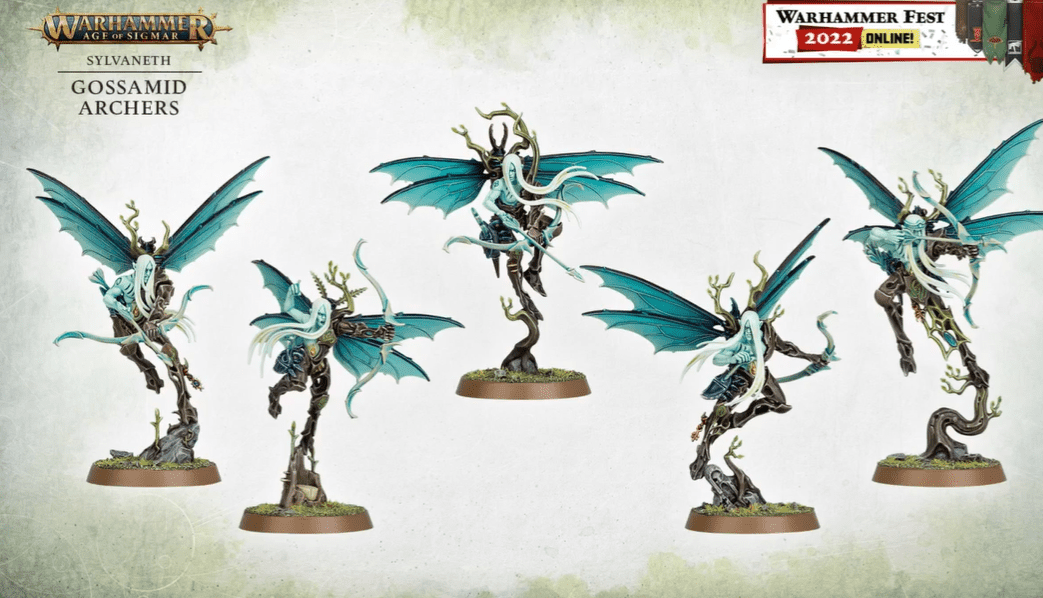 Gossamid Archers are lethal skirmishers afforded the power of flight by symbiotic zephyrspites – their arrows, loosed from elegant bows, play host to ravenous grubs that bore into their enemies. Yum!

Just like the Arch-Revenant, these models are actually being carried by bugs on their backs and their arrows will explode into bugs that dig into the enemy’s skin! 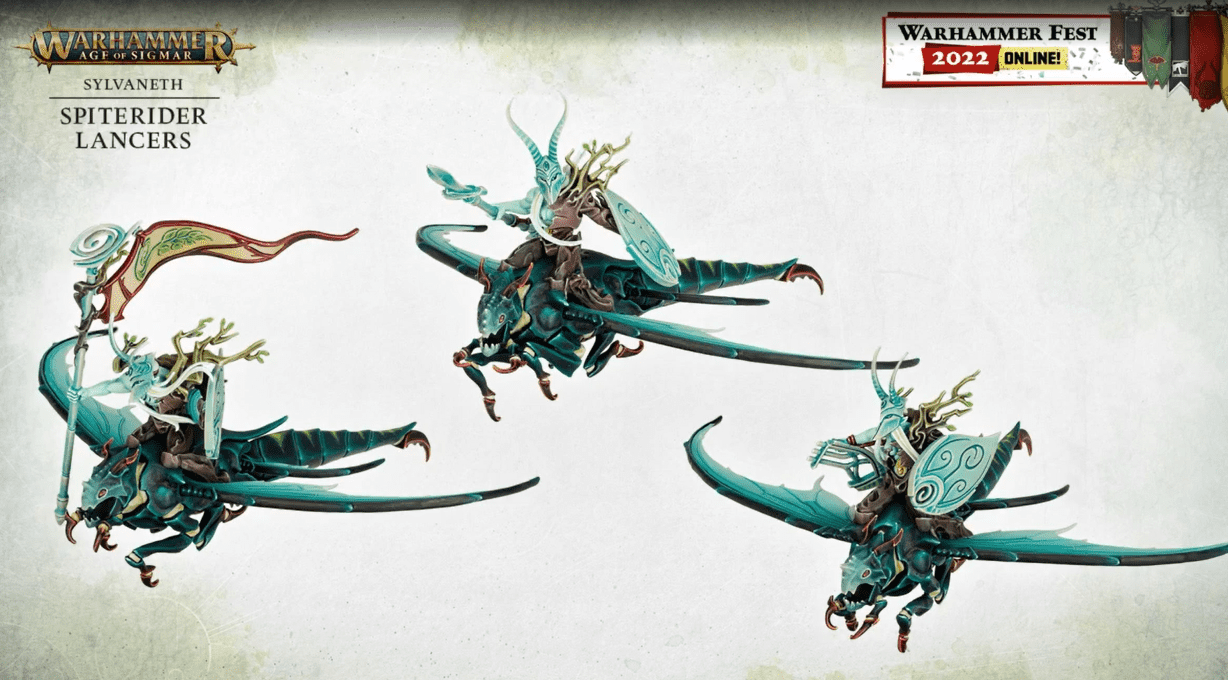 These fearsome cavalry come in two flavours. Spiterider Lancers are Alarielle’s elite shock cavalry. Lightning-fast, they dart into combat and strike their foes down before they can react.

These are very fast and hit quite hard. According to the preview, they have a decent number of attacks and wounds and fill a niche role for Sylvaneth-  getting somewhere fast and hitting hard! 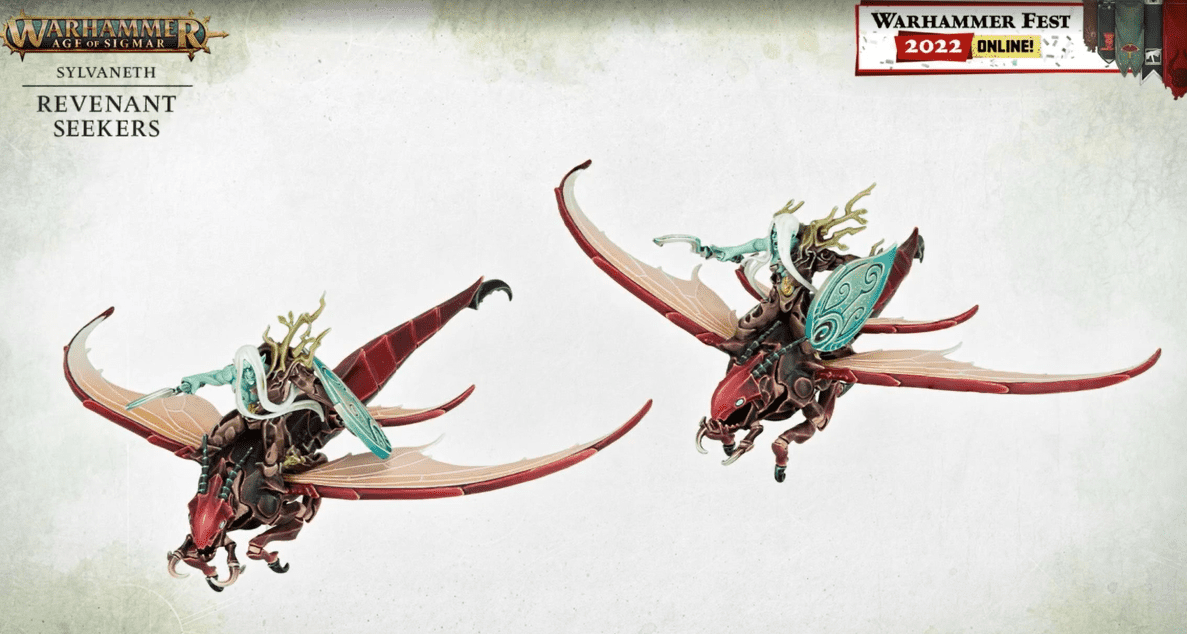 Revenant Seekers are a touch slower, focusing on the vital task of harvesting the life energy of fallen Sylvaneth to resurrect their allies.

You can build this kit into two different units, and we’ll have to see how they break it all up and if you can magnetize them or not. 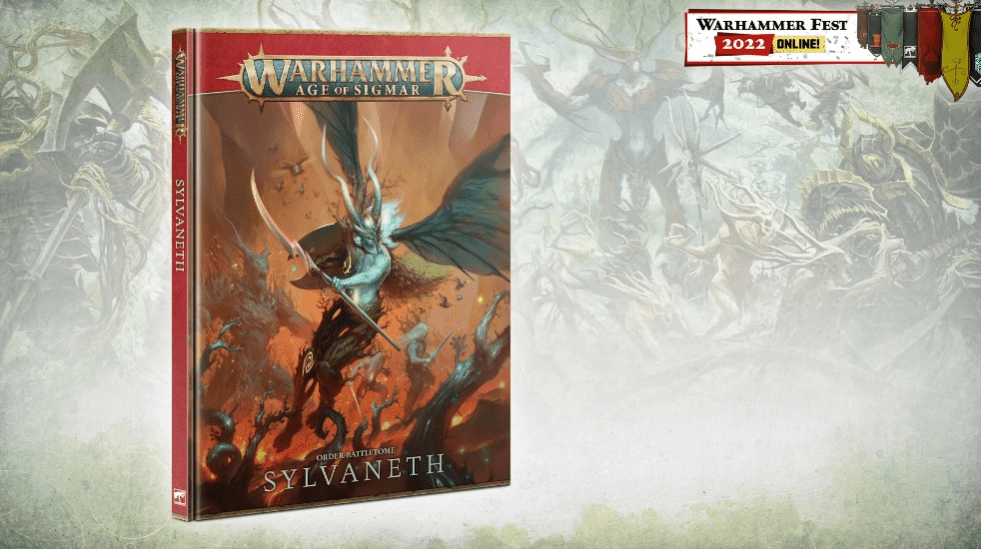 All of these fabulous floral fighters and carapaced cavalry are arriving alongside the latest book for the Everqueen’s forest-dwelling sentinels, Battletome: Syvlaneth, which you can expect to see more of in the coming weeks.

Of course, with so many new models, they are also grabbing a new battletome book for Age of Sigmar 3.0!

Plus of course, we know there is a new Skaven Deathmaster model coming as well, and it appears he will be inside the new Echoes of Doom box too…

The Skaven Deathmaster is an expert hero-killer armed with an arsenal of esoteric weapons coated in lethal toxins devised by the Clans Eshin, and more than a match for most targets. 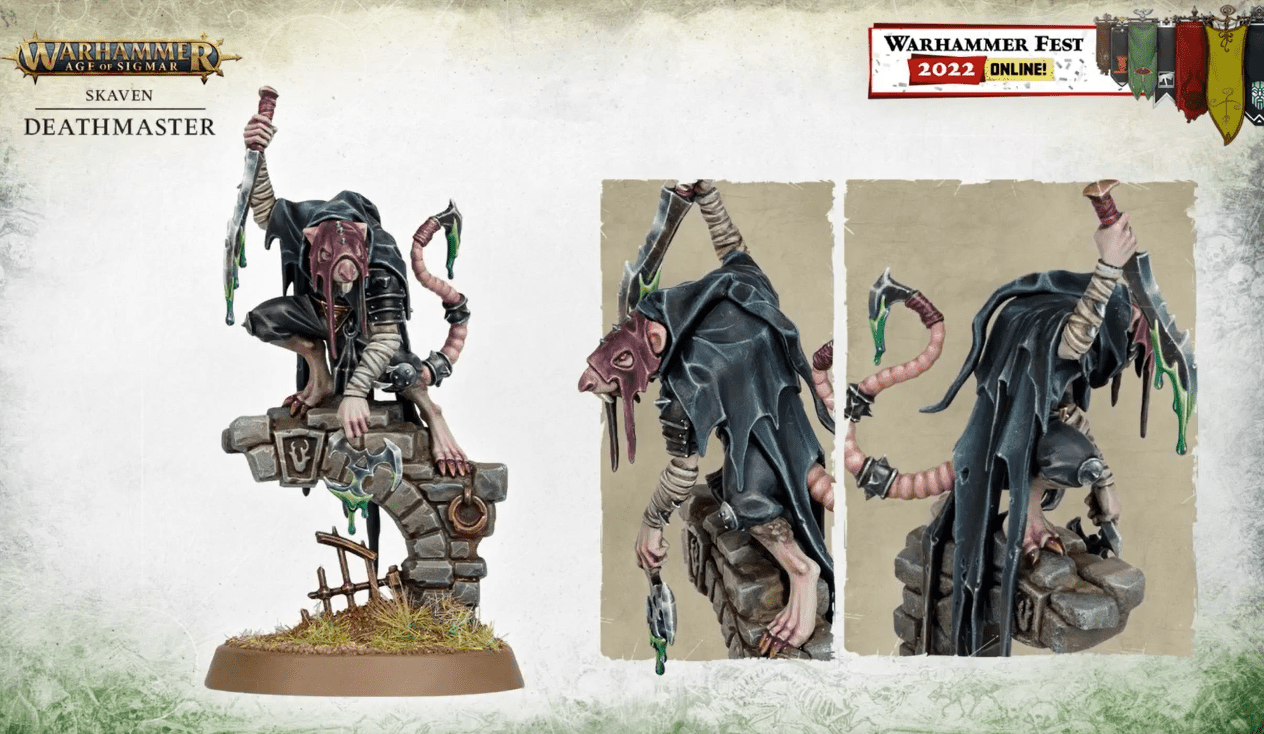 It looks like the theme from the recent Underworlds box is continuing for the Skaven!

Sneaky Skaven assassins have been around for a very long time, but this is the first time we’ve seen one in plastic. As you can see, it’s been updated with some very Warhammer Age of Sigmar-looking terrain while maintaining that classic Skaven look, including having a weaponised tail!

This probably won’t be a centerpiece for your army, but it has some really cool detail that would make for a fun painting challenge. 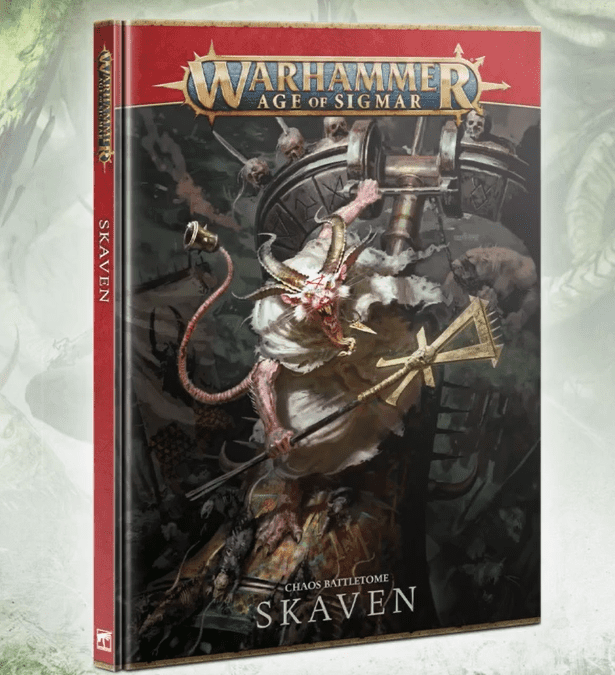 Squeaking of Skaven, we can also reveal the next battletome for Grand Alliance Chaos – the children of the Horned Rat will be emerging into a realm near you very soon!

Well, if the Deathmaster wasn’t enough for you, they are also grabbing a new battletome, and the cover art is pretty dope!

UPDATE: Looks like it is official; Games Workshop confirmed Echoes of Doom already! 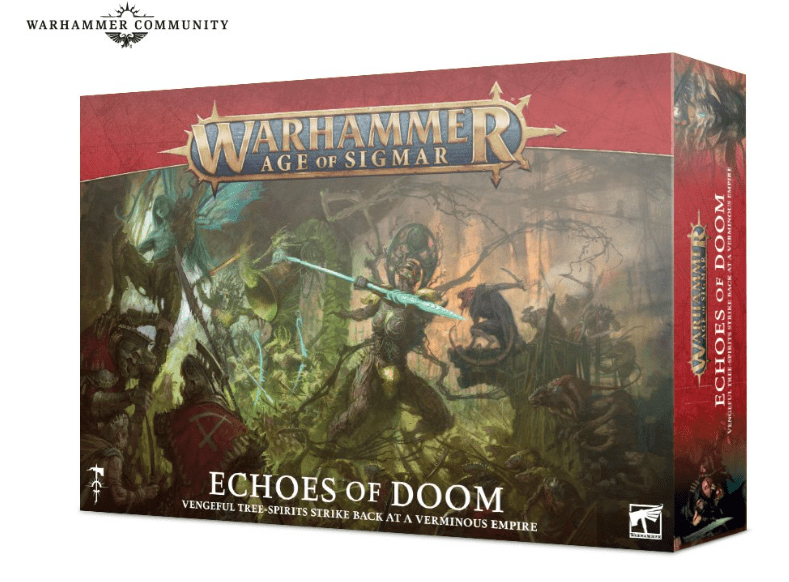 What have the servants of the Horned Rat done this time? They’ve only gone and dug out a gnawhole right into the heart of Ghyran to pilfer a juicy harvest of soulpods – classic skaven. Led by the Grey Seer Skrittat, master of subtlety, they led a surprisingly successful heist into Neos.

This sacred land near the very centre of the Everspring Swathe was considered impenetrable, making the crime even more of an affront to Alarielle and her children.

This is a bigger mix of old and new units than expected, but you still get three new units in the box. Two for Sylvaneth and one for Skaven. It does make sense, though, as if there were just new units for the Sylvaneth, the box wouldn’t make a ton of sense for players trying to get into the faction.

They didn’t give us a release date quite yet, but usually, it’s not far off when you see the box.

Images of what appears to be a new Battlebox for AoS called Echoes of Doom were spotted on Reddit. The contents look to be a mix of new and old units, with the Sylvaneth getting the lion’s share. 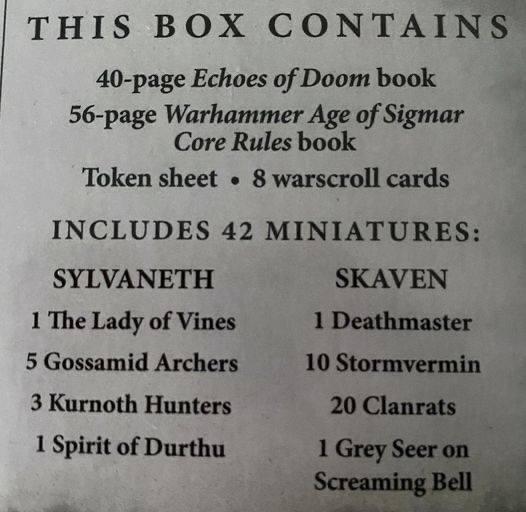 Comments seem to be mixed from on this one, with most Skaven players not really liking the models that supposedly are coming with this box set.  Either way, there isn’t a lot for Clan Eshin, unfortunately. Perhaps more new models will be offered when the Skaven book itself releases in the near future, we hope. 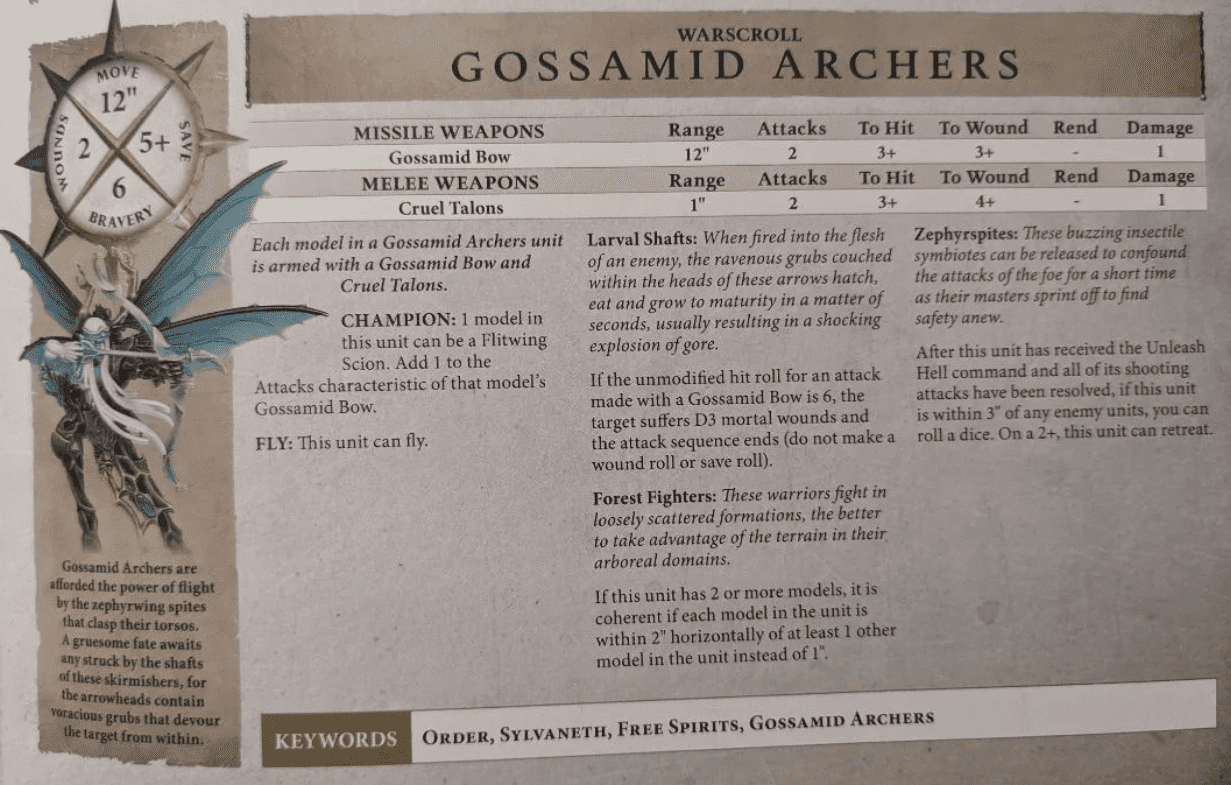 This is probably new Sylvaneth Gossamid Archers Warscroll Rules from the new box set, which may change with the actual battletomes hit. However, since we know both are on deck, so to speak, then it’s probable that the battletome book rules may override these ones.

However, with a moment of 12 and exploding MWs on 6’s, and the ability to dip out 12″ when charged, these new models are going to be harassers extreme to their enemies.  If there is a way for them to re-roll their attacks, we could see a lot of players making room for them in this lists going forward.

Well, let’s take a look at their rumored points first… 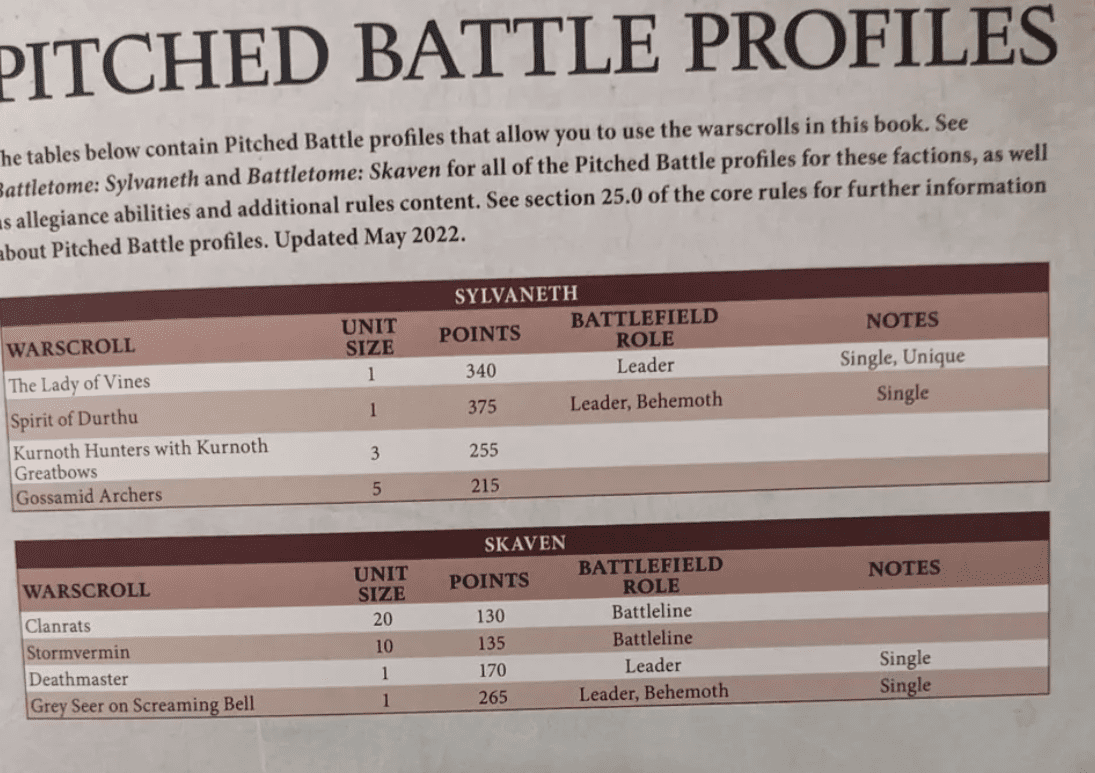 Looks like the Sylvaneth Gossamid Archers are clocking in just under Kurnoth Hunters and well above the Revenants that you can use for battlelines.  Perhaps their juice will be worth the squeeze when we see the rest of the Battletome rules for the Sylvaneth?

Points-wise, there seems to be a bit of a difference between the two factions, so it will be interesting to see what the narrative missions included in the box turn out to be…

New Warscroll from the Echoes of Doom Box for the Kurnoth Hunters, Clanrats, and Stormvermin, have been Spotted 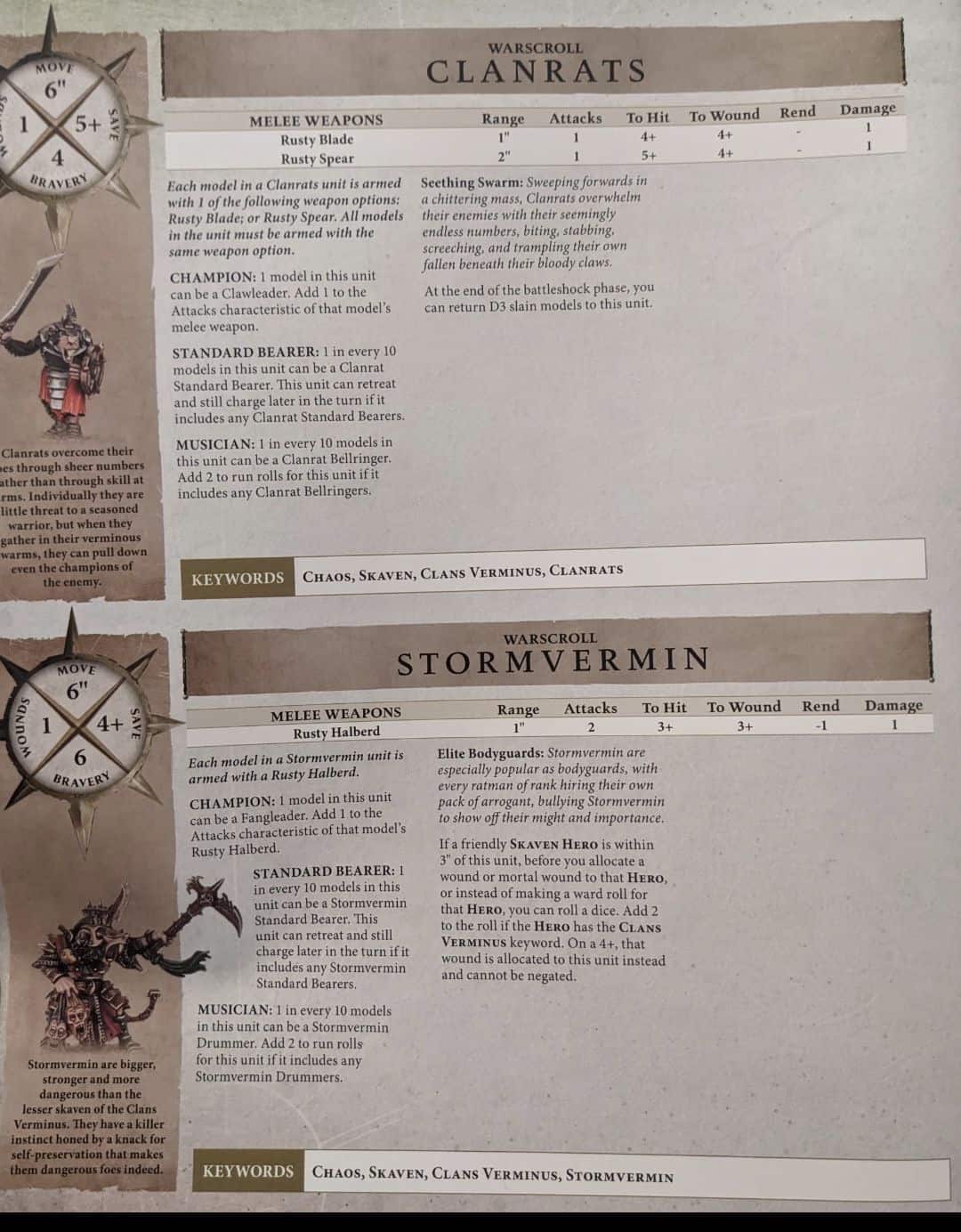 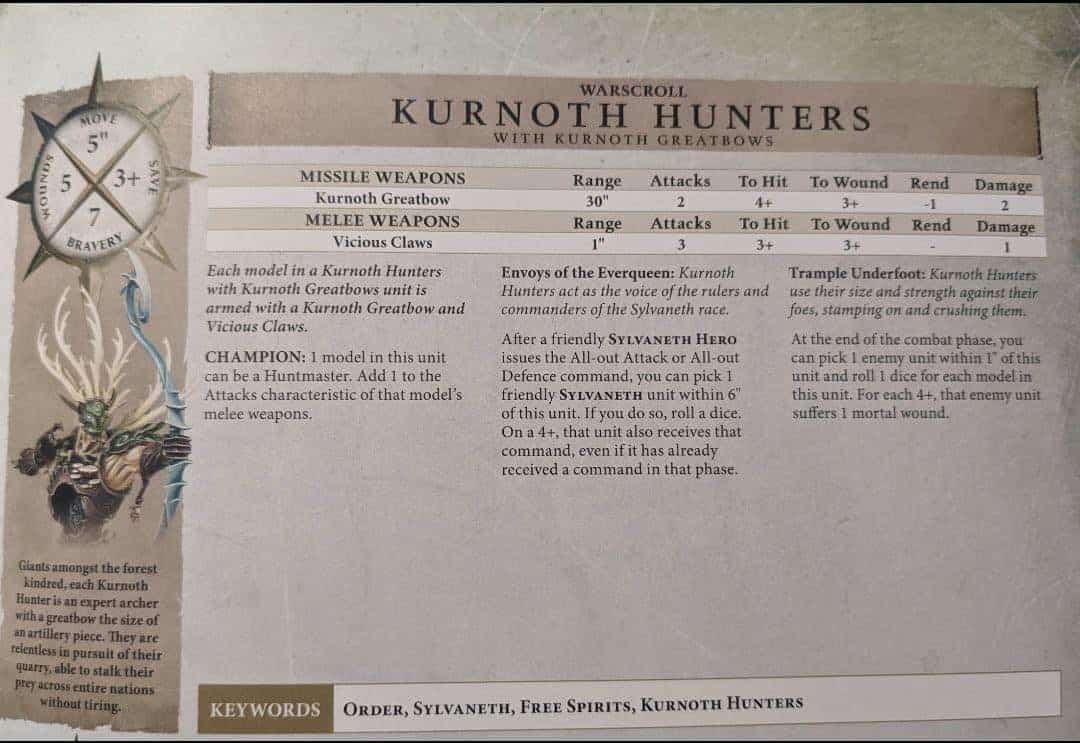 Are you excited about all the rumors for a new AoS Echoes of Doom battle box with Skaven with Sylvaneth models? 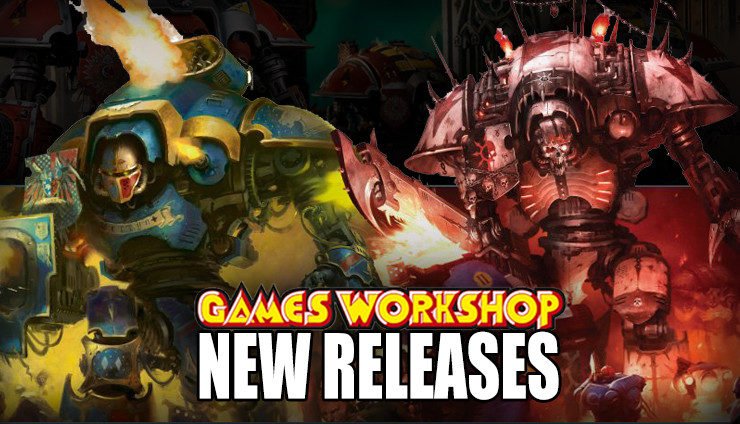 NEXT ARTICLE
New Imperial & Chaos Knights: Pricing & Where Get Yours »
If you buy something from a link on our site, we may earn a commision. See our ethics statement.