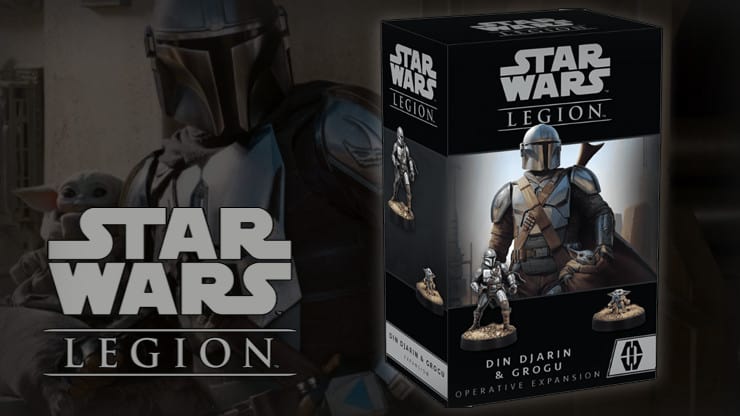 The cards come from AMG’s latest transmission. First, check out the new pack we saw, then jump into the rules!

The new models are just so cool, and we’ll say it again, who doesn’t want to play an actual game with these Grogu and Din Djarin?

You can also grab the assassin droids, so there is plenty to dive into! 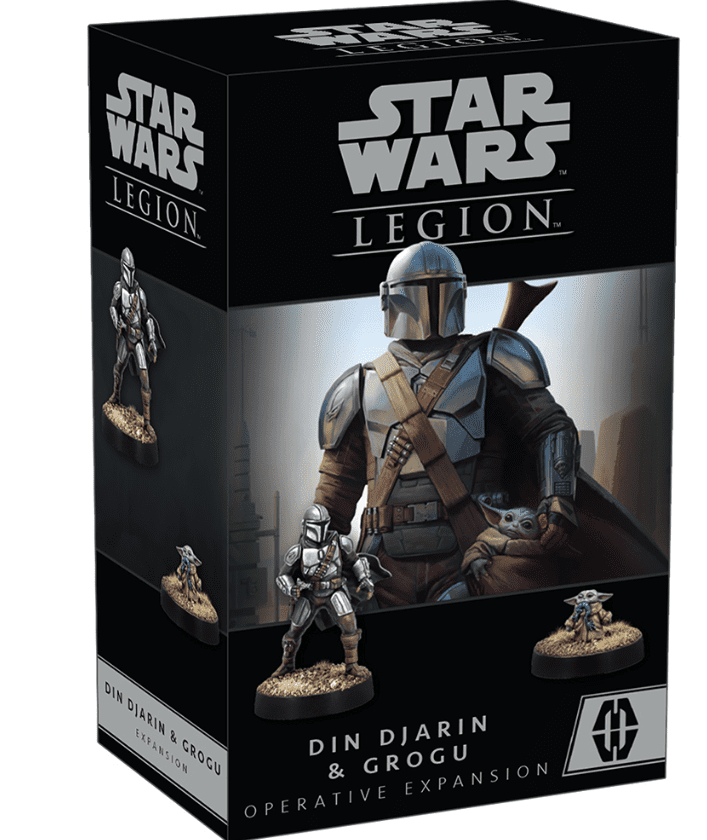 If you love everything Star Wars: Legion, check out what else is going on with it from AMG here. 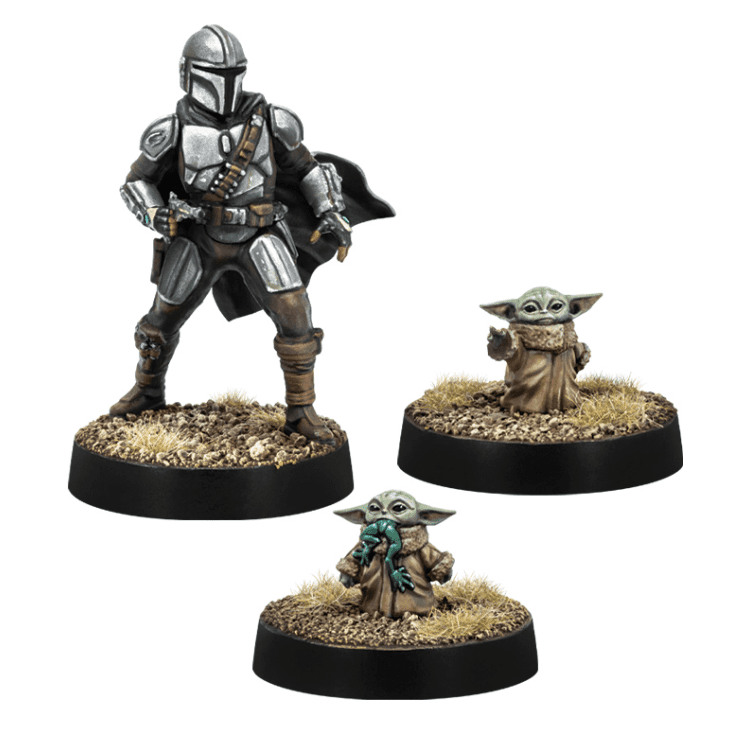 Let’s hear what they have  to say about the new set:

The Mandalorian and Grogu are ready to join the battles of Star Wars: Legion with this Operative Expansion! Din Djarin, also known as the Mandalorian, expands the game’s mercenary forces with his skills as a bounty hunter. Joining him as a counterpart is Grogu, a foundling with a strong connection to the Force. 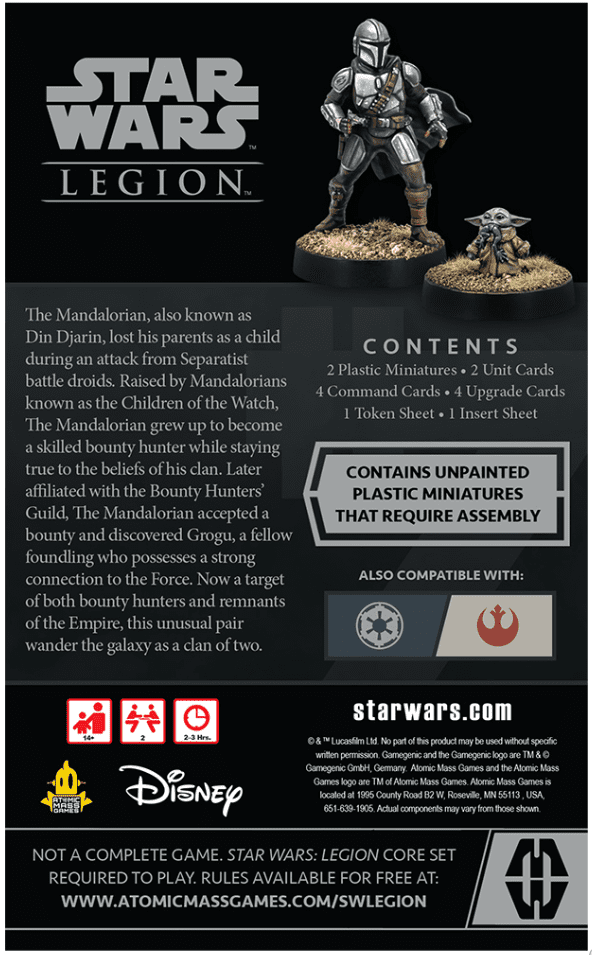 Together, they form a potent duo that can also enhance your players’ Rebel and Imperial armies. In addition to their latent abilities provided on two unit cards, this expansion also includes four command cards that give them even more strategic options in battle. Finally, four upgrade cards give players the freedom to outfit Djarin with an array of additional equipment, including his Amban Rifle or a Baskar Spear. 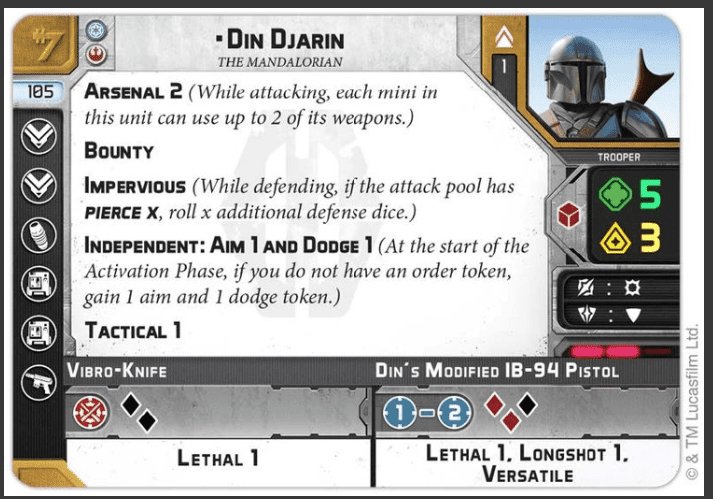 Bolstering the offensive power of Rebel and Imperial Armies, Din Djarin is a Mercenary Operative with an impressive array of options. His combat expertise is represented by Arsenal 2, Tactical 1, and Surge: Critical. The addition of Bounty also adds a layer of versatility to his kit, giving him the option to focus on hunting down a single target instead of contributing to the larger battle. Like other Mandalorians, he has impressive defensive stats, with Impervious, five health, Courage 3, and surging red defense dice to keep him in the action for as long as possible. Finally, Independent: Aim 1 and Dodge 1 means that when Din doesn’t receive an order, he will have the tokens he needs to complete his objectives.

As you would expect, he has a bunch of cool rules, most of which are super flavorful. Plus, getting Aim 1 and Dodge 1 will add a ton of versatility to his kit, and then with all his defensive stats, he will be a great addition to your forces!

Weapons are part of his religion, and Din Djarin has many choices when it comes to the upgrades he brings to the table. With a staggering 6 upgrade slots, Din can be outfitted in many different configurations. He comes with a handful of new Armament and Gear options, each augmenting different factors of his unit card. Din’s Amban Rifle is the ultimate long-range weapon, dealing an automatic wound and a suppression as he disintegrates his target. In close combat, the weapon can also immobilize units he is engaged with. But when you need a definitive close combat weapon, his Beskar Spear will certainly get the job done. This weapon gives Din access to Duelist, and combos excellently with his Vibro-Knife. Additionally, Din can equip his Flame Projector.

What else would you expect, other than a ton of awesome weaponry? With the show showcasing so many weapons, it’s cool to see AMG go with the trend and give him everything you could want. 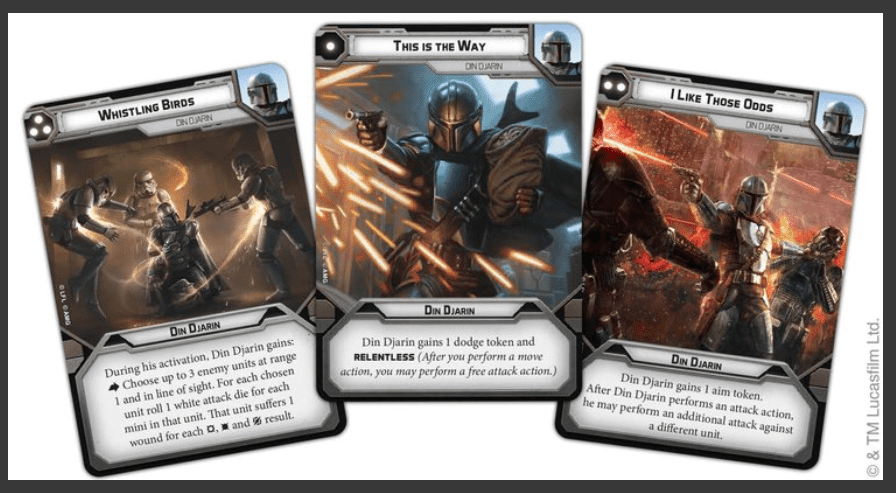 Din also brings three new command cards to the fray, each representing a different aspect of his fighting prowess. This Is The Way gives him a dodge token and Relentless, giving him the edge in combat as he makes his way across the battlefield. Din gains an aim token when he plays I Like Those Odds, and the ability to perform an additional attack after his first attack action. Finally, Whistling Birds allows the Mando to assault up to 3 enemy units at range 1 and in line of sight with a hail of lethal projectiles.

Two of the cards let him really take on multiple enemies at once, and then This is the Way will make him even harder to bring down! Overall, some really cool command cards. 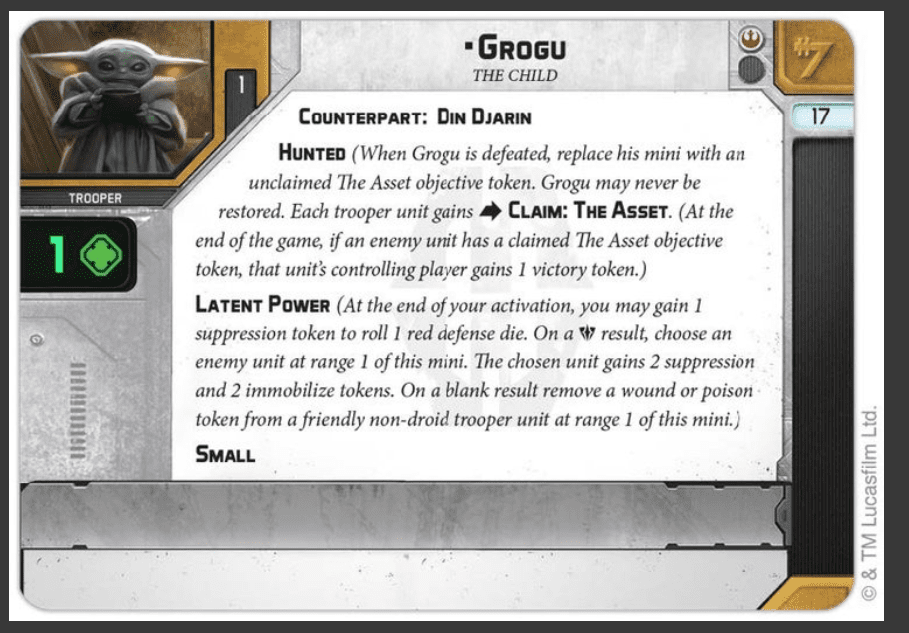 Joining Din in this expansion is The Child, Grogu. He is a Counterpart to Din Dijarin, who can be added while Din is taken in a Rebel army. While Grogu is equipped, he adds a unique ability to the unit with Latent Power. This keyword can fix an enemy unit in place or heal allies. It comes at a cost, however, as Grogu will constantly be Hunted as long as he is on the table.

If you’re taking Din, you just should always bring Grogu! His latent power is represented pretty well by the rules, as he can either heal your units or immobilize the enemy! 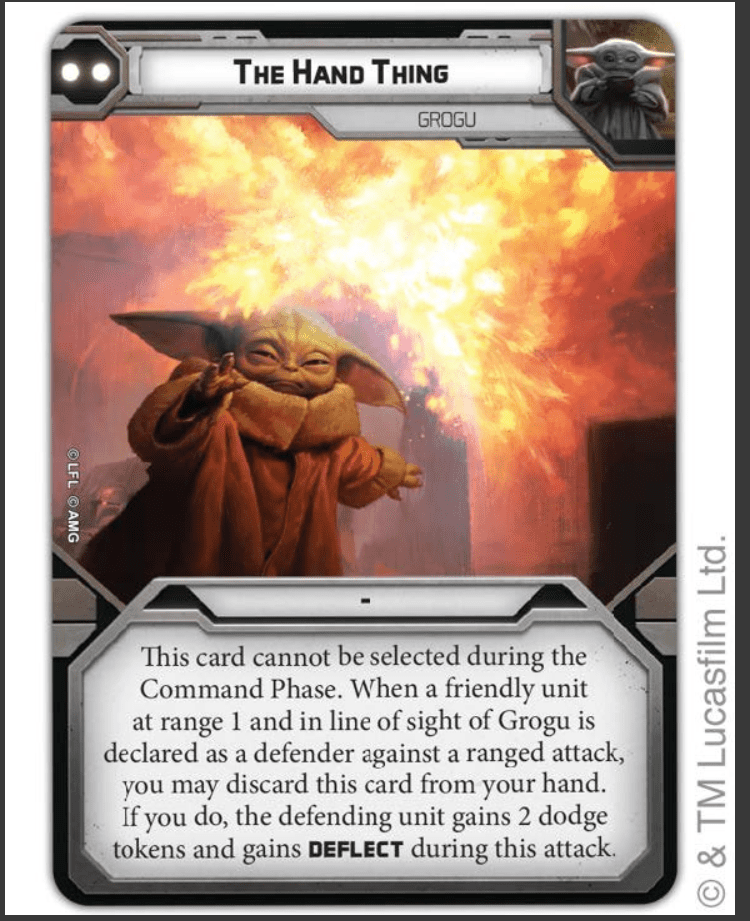 Additionally, Grogu gives you access to a new command card, “The Hand Thing.” This card acts differently than most others, as it cannot be selected during the Command Phase. Instead, you can discard the card when a nearby friendly unit is defending against a ranged attack. That unit gains 2 dodge tokens and Deflect—representing Grogu’s ability to protect his friends in a moment of great need.

This might be the best command card ever! It makes a unit super hard to hit and just brings back all the good memories from season 1.

Do you like the new rules for the Mandalorian Din Djarin and Grogu in Star Wars: Legion? Will you be picking the minis up? 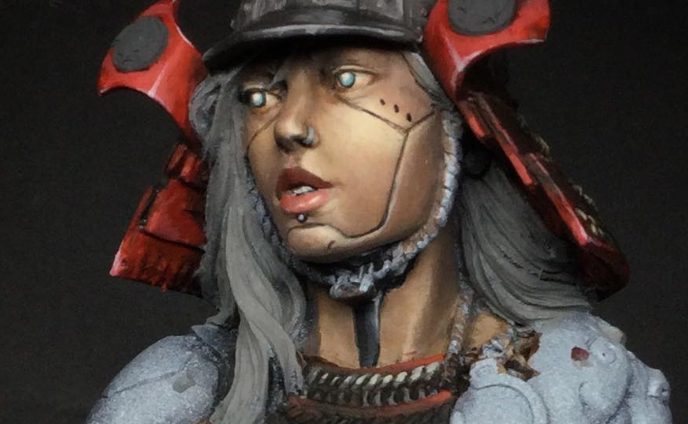 PREV ARTICLE
« Where Past & Future Meet: Army of One 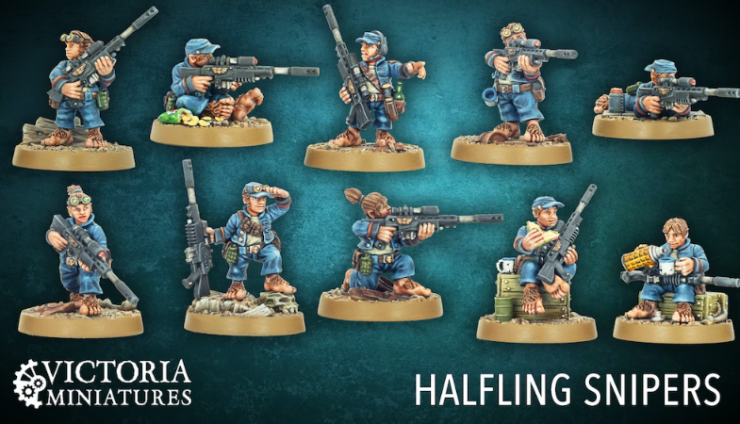 NEXT ARTICLE
Victoria Miniatures Releases New Halfling Sniper 3D STLs »
If you buy something from a link on our site, we may earn a commision. See our ethics statement.