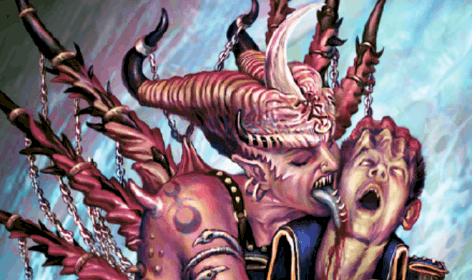 Today we’re unleashing the warp and coming in hot with our Daemons Tips & Tactics from the Curse of the Wulfen.

I really think Games Workshop is on to something with this current style of Supplements that Kauyon, Mont’ka, and now Curse of the Wulfen. I think we can all agree it up-ed the game for Tau, White Scars, Raven Guard, and Imperial Guard.

What I like about *this* supplement is that it gives them a non-codex related reason to update the story line and to let people get their creative juices flowing with new models, rules, and formations. Space Wolves got updated to like 7.5 edition with this, and Daemons got a full on Decurion-style formation to bring them “current” as well! 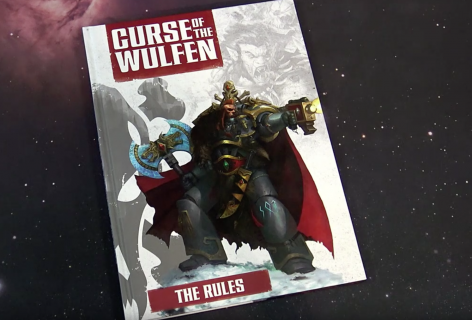 I’m going to make a prediction/hobby wish, the next campaign book should be space wolves, grey knights, and maaaybe a little splash of Blood Angels. (However, I get the sinking suspicion that Blood Angels are a ways off considering Shield of Baal: Exterminatus was kind of the first of these expansions in which we saw fluff and new formations).

Don’t tell the Space Wolf players but I really think this book was more about the Daemons.

However, there are some pretty dope formations for the Wolves in here as well; which, we’ll go over in another article/video. 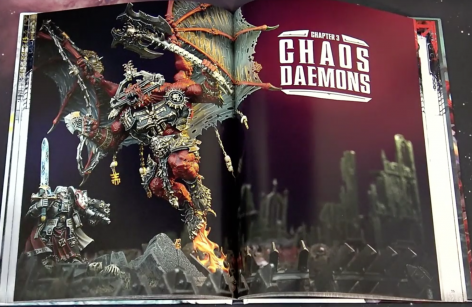 Chaos is playing catch up coming back in to the 7th edition world with this book. First I want to go over the special rules to build good rules foundation.

The warlord traits now has one chart for each god. Which, from a rules perspective, is a little bit loose and they’re the source of a few rules conundrums we’ve gone over already as well as a few more I haven’t gotten to yet. Granted, I think we should always err on the side of caution. I don’t think, in my heart of hearts, that we should be getting  4+ seize the Initiative or -4 to your opponents reserve rolls. However, it’s out there and you might stumble into this against “that F-ing guy” and it might result in a case of the feel badsies.

We’re here to educate you so that you can have a conversation about this before the game. I fell like it’s really up to Games Workshop and/or the community to resolve these issues.

Games Workshop, you make models and you make the rules.

Please, fix these little issues. You’re releasing the swiss cheese of rule sets and it’s hurting the enjoyment of the game. 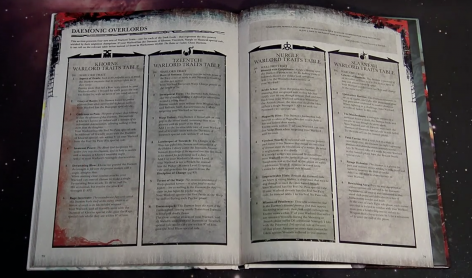 Rules issues aside, lets get back to the book. I’m digging Nurgle; a lot people are digging Tzeentch. Nurgle FMC’s where a thing back in the day and are still quite strong now to be honest. However, these Nurgle warlord traits are strong and don’t forget you get to re-roll them as long as you’re bringing a CAD. Sometimes it’s a good idea to bring a CAD and a formation (or a decurion?).

First up is +1 wound, that’s worth about 35-40 points in my opinion. If you get that you’re basically upgrading your self to the Man, the Myth, the legend status. Next up, Acid of the Ichor, Str 1, AP2, poison; it’s kinda average but if you get it you get it. Then there’s plague of the fly hive, units within 7” of your warlord can only fire snapshots against the warlord and his unit. That’s really strong as it essentially confers invisibility.

Pro-Tip: Don’t forget that versus flamers, they have their own special rule: Wall of Death and the wording on it is that it doesn’t snapfire, so they’re going to get you. Be very aware of that. There’s a little grey area that a lot of people aren’t too clear on and they think that means you can’t shoot them at all. Not true.

Number four, if a model suffers an unsaved wound from your warlord they have to take a toughness test or suffer an additional wound; armor and cover saves cannot be taken. Number five, Impenetrable hive, grants Fell No Pain, if it already has FNP he gets +1, there are ways to game that. On the daemon gifts you can get FNP, if you that down to 4+ you can really start gaming the system with a couple of gifts can bump himself up. 6, The miasma of pestilence, shooting wounds inflicted within 7” of a the warlord cause an additional D6 additional hits with poison; which is a bit whatever.

Slaneesh, I feel, is like the red headed step child of 40k. Everyone is trying to kill him/her and it gets no respect but he’s a powerhouse in close combat. As for the table there’s Celerity of Slaneesh, run and charge; that’s kinda neat. There’s also Murder Dance, re-foll failed to hit in assault phase which is useful. The rest of the table is kinda whatever.

Slaneesh has the same issue Khorne has, super good in combat; has to get there. Which is a shame because Khorne is a fan favorite but assault is struggling right now. Same thing with Tyranids, on paper they should be great but getting there is a big issue.

Khorne’s warlord traits 1. Fear mechanic, not great 2. Rampage, that’s super good if you’re a single model. 3. FNP and units near 6+ 4. +1 Strength 5. Devastating blow is okay 6. Rage is pretty good as it gives to all Khorne within 6inches. That’s a huge boon right there.

The Artifacts section for Khorne has some clear winners and losers. Of course, it’s Khorne, super popular, love to see it on the table, hard to get into combat.

Winner: The King of Swords; it’s a pretty dope sword; it let’s you hit on 2’s. If you bring the tetrad you get to re-roll ones. So, you can see the power in that combination. Life Taker, 6’s cause instant death, for 15 points it’s not bad. The crimson crown gives you another attack but stacks with the warlord trait. Skull Cutter, 6’s are Strength D. The armor of scorn, for it’s point would have been better with a 2+ armor save. 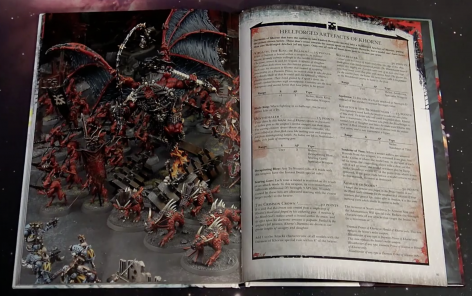 Tzeentch is probably the best warlord traits of the four by far. 1. Harness warp charge on a 3+; this could confer if you bring the tetrad formation which gives you three psykers casting on a 3+. That depends on how you rule if they’re all your warlord or not. Is that fair? Probably not but having a daemon casting on a 3+ with cloak and paradox is good. Casting it on a 3+ gives him the flexibility to always get your psychic phase.

Daemons are so cheesy right now but they keep Eldar in check, trust me.  They’re the necessary evil to keep other things in check. right now I feel like.

Warp Teather +1 Invul that is gameable because rolls of 1 you can roll, if you take things like the cloak you get a 2+. If you’re going with the Tzeentch build you probably want to go for Turn of the Warp, you’re probably trying to game the system by throwing lots of dice at things. 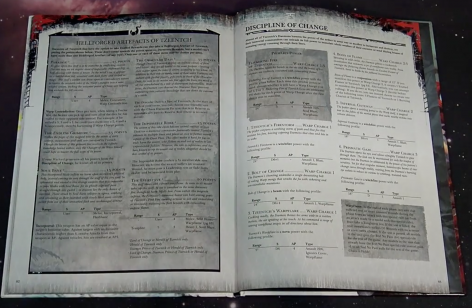 Next up, the Tzeentch Artifacts, wow, super spicy; these artifacts are by far the best IMHO.

The paradox lets you roll a set of dice, what’s really cool about this is that you get to flip the dice over and that’s your final dice roll. 1-1-6, flip it you get a 6-6-1, which does get you into perils but you get that choice. Now, if you throw one dice at something it’s going to either pass or fail if you flip it; again you get to choose. If you thrown five dice at something you’re going to pass you just need to play it right. Get the formation that lets you cast on 3+ and now you got some really interesting options if you’re trying to get someone to use their warp charges against a power you’re not interested in.

The Grimore is another powerhouse piece of wargear; boom you get allllllll the powers and they’re no joke.

The Discipline of change is what I’m all about.

Powers 1,2,5 are the same from the Daemon codex.

Number 3 is amazing. Nova, it’s only warp charge 1, you can get bonus thanks to warpflame via loci and the formation in here. You can get this up to Strength 8 Nova. You’re going to be mushroom bombing Eldar Jet Bikes, you’re going to get after them because you’re going to ignore cover and you’ll be in the air.

Pop off a blossom and you’re going to dropping squads of Eldar jet bikes – and there ain’t nothing wrong with that! 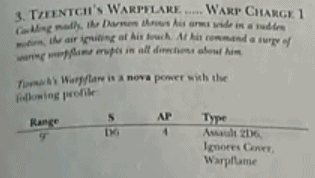 The boon of flame gives you an interesting model, is super gamable, but anytime you get a free hundred point chariot you can get some craziness going on. 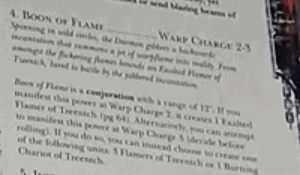 The bolt of Tzeentch,  (It’s Str D at 18”) It is a warp charge 3 but it is well within your reach thanks to paradox.

On the Nurgle side of things, he’s got some stuff but it’s not “OMG” amazing. The Grotting is good it gives -1 to toughness which makes a lot of Tough 5 models now susceptible to mass Strength 8 shooting which you can get in the book. The rest are very average IMHO. 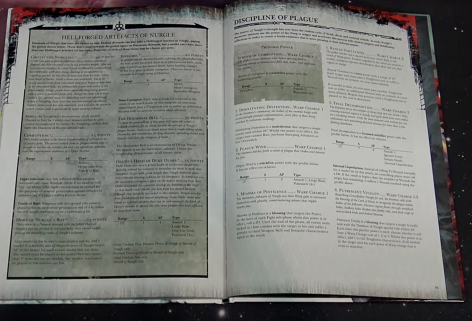 On the psychic side of things debilitating dissention is cool because it just happens, no leadership test, nothing, you just lock up a unit, BOOM!

The Purulent Vitality is really cool, you get to choose how many warp charges you throw at it and can increase your toughness by 3+ and that can really get some work done. 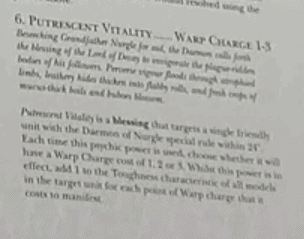 Slaneesh is underwhelming and disappointing. The Soul Steeler is fluffy and kinda worth it for 20 points. The Slothful claw for 10 points isn’t bad. The Whips of Agaony is a winner; if the enemy suffers an unsaved wound they can’t attack this turn. The discipline of excess is mediocre. You can read them for yourself but nothing really outstanding, again IMHO. 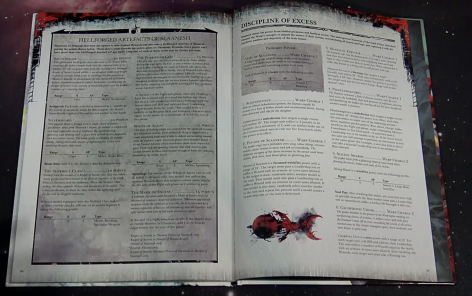 So that the foundation of rules. Next time we’ll talk about how all those rules interact with those formations, the new decurion, and the datasheets themselves. They’re a lot of synergies in here to go over and to hopefully surprise your opponent with.

What do you guys think? Which God came out on top? 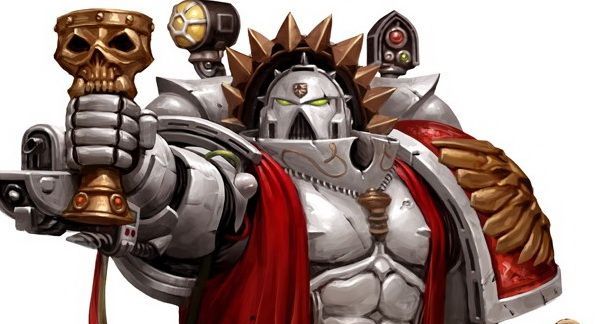 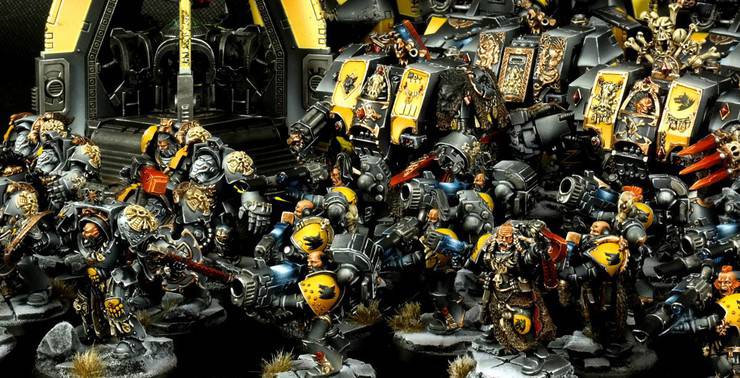 NEXT ARTICLE
The Space Wolves Army You HAVE To See? »
If you buy something from a link on our site, we may earn a commision. See our ethics statement.