All The Solved Rumor Engine Teasers Going Into February 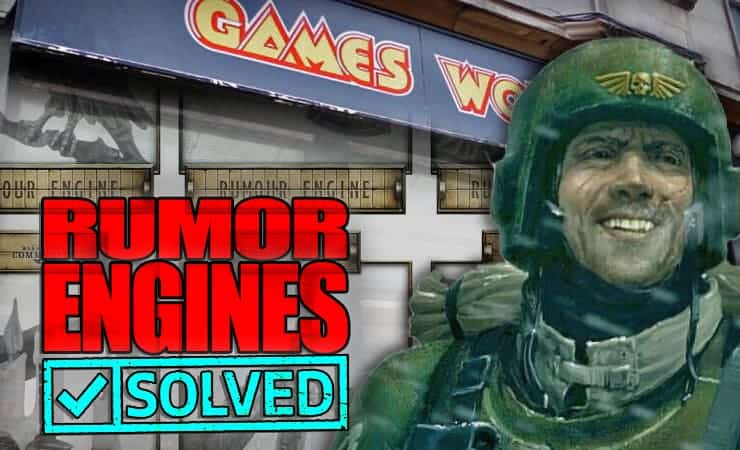 These are all the Rumor Engine teaser images that have been solved with their new models identified going into Feb. 2022!

Not even a month went by and we already have more rumor engines solved! Some were not hard obviously with the big reveals of the from the 2022 LVO.

Check out all of the solved GW Rumor Engine Bits that have now been revealed! 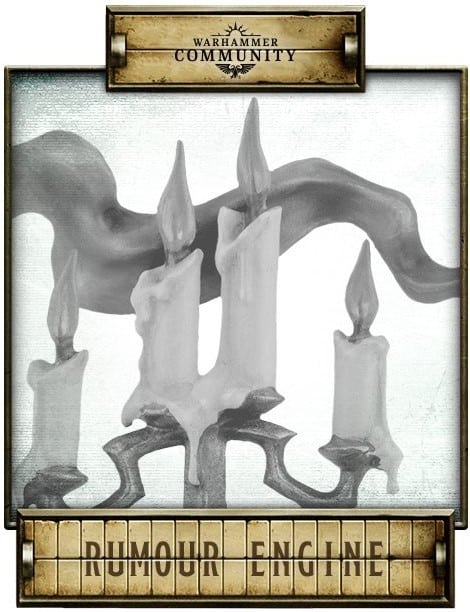 This bit features and metal structure and some burning candles, which is immediately symbolic to one army in particular. Sisters of Battle, or Adepta Sororitas, are very well known for their excessive use of flames, whether that be candles, giant censures, or flamers. They really do take the idea of “Purifying Flames” quite literally.

While Sisters might be the easier answer, this could also very well be a bit for Age of Sigmar. It wouldn’t be too surprising to see a Nighthaunt or Cities of Sigmar model with this on its back like the old Bright Wizards in Fantasy.

Good thing we doubled back because as it turned out this really was a new Nighthaunt mini! 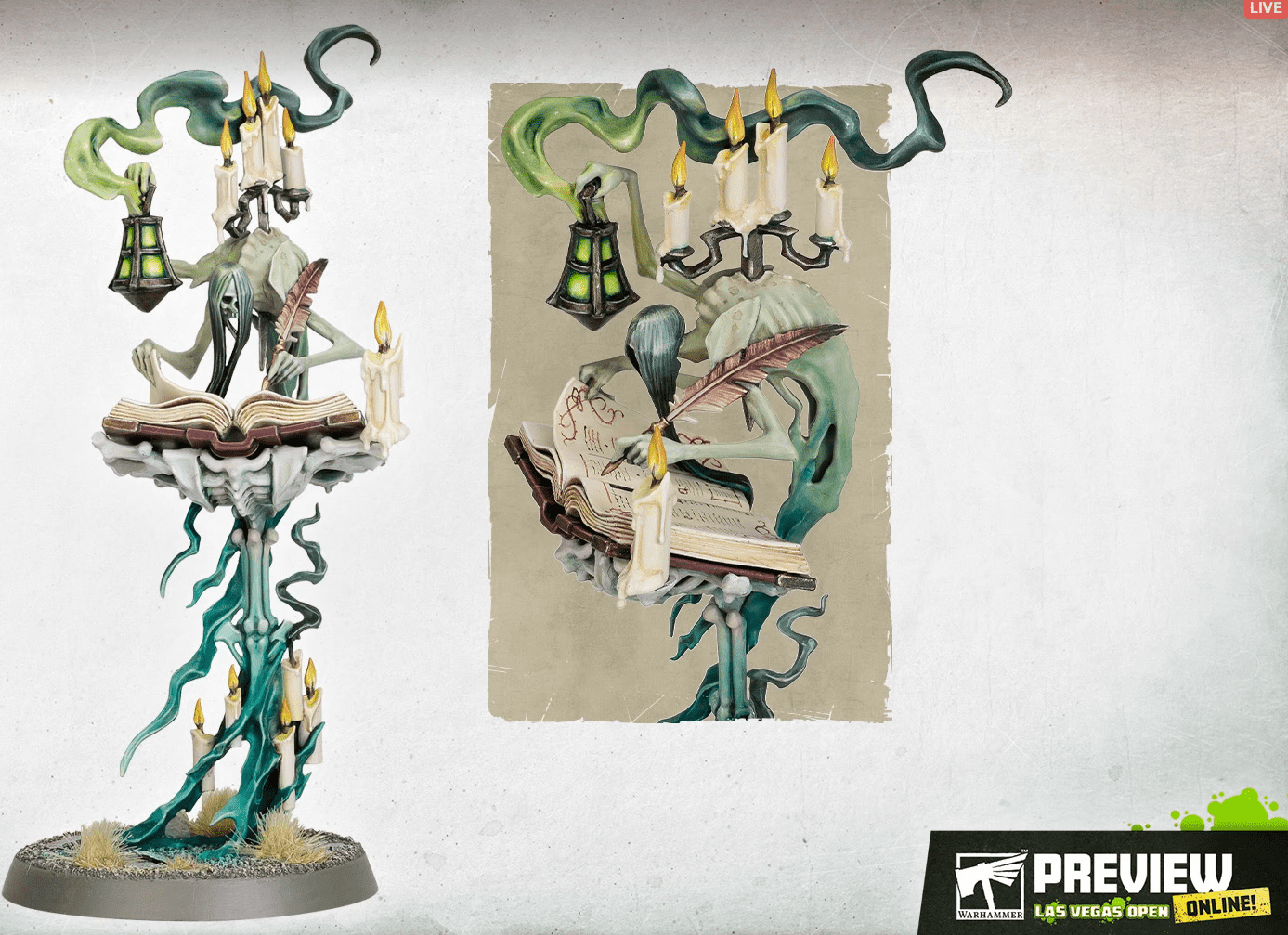 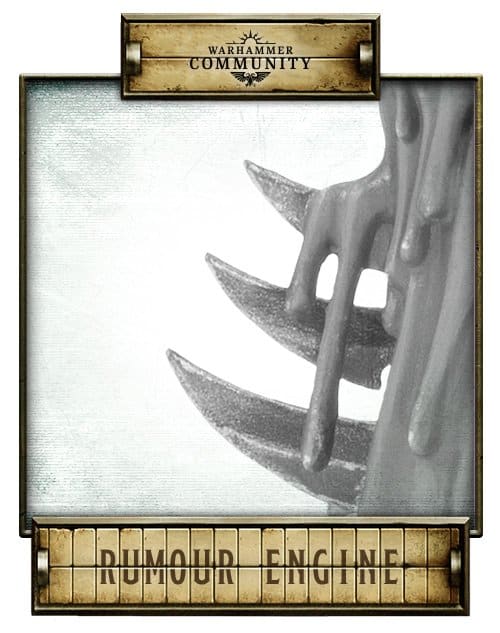 Looking at this rumor engine, it looks pretty easy to place, but it’s still super tricky because there is no clear indication if this is for Warhammer 40k, or Age of Sigmar.

It’s easy to see what could be flowing blood, however, this could easily still be some other liquid, as the image is only in black and white no matter what our minds might think.

From the look of it, we haven’t really had many bloody bits for Chaos specifically Khorne in either systems and really blood has been mostly used for Daughters of Khaine

Well, we might have mentioned Khaine… but not that one! This one is in 40k for eldar! 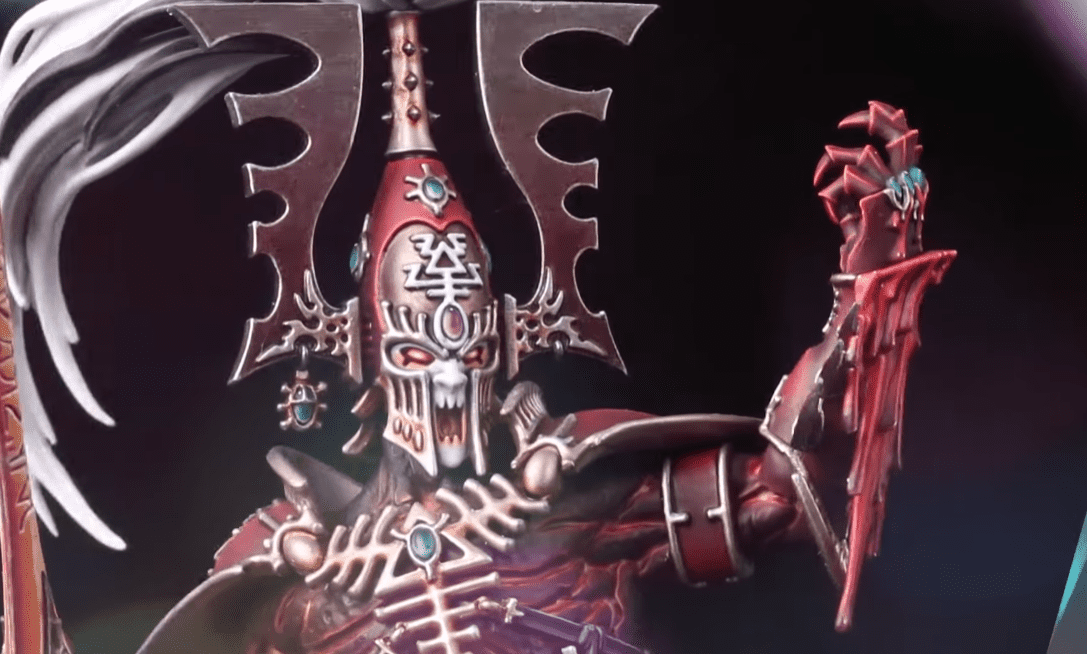 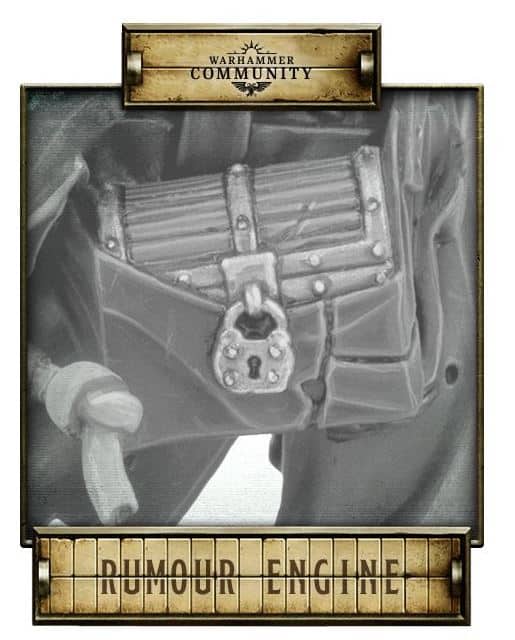 Well, the treasure chest is pretty easy to see what it is right away. That doesn’t mean it’s easy to place however because, in the AoS world, there are plenty of treasure hunters and little holds of gold. While it could always be something for 40k, we’re basically ruling that out for this one.

The most obvious guess for this one (to us at least) would be a new Maneater (or paymaster) for the Ogor Mawtribes. As they are big enough to make the chest look small and then the models already have chests all over them.

We got the race right! but not quite the purpose as this one turned out to be a pirate in Underworlds! 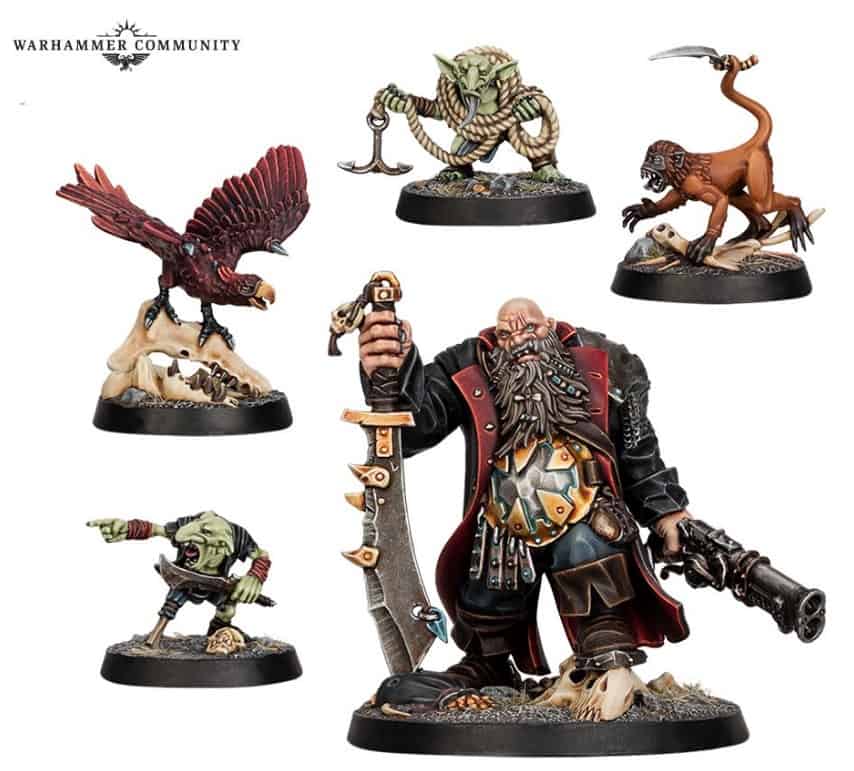 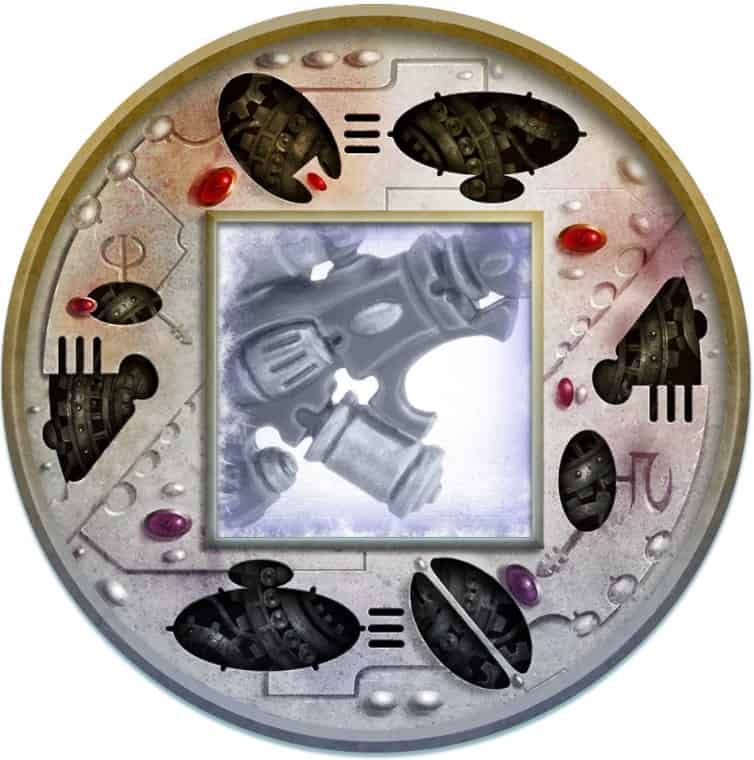 While we may have called for Fire Dragons before, this bit looks even more like their weapons, pushing the envelope even more. While it might not guarantee it, it certainly makes it more likely that they will be lucky enough to get an update! 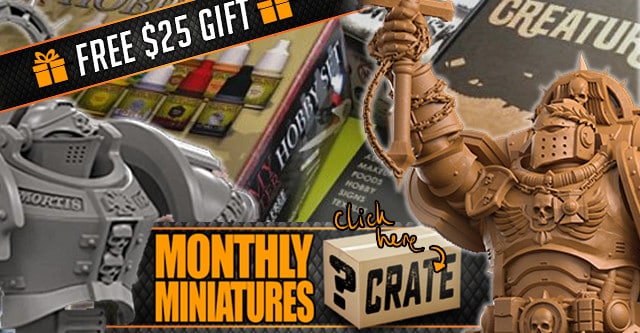 Pretty close for this one, however, it ended up being the new Autarch and not the Fire Dragons or Storm Guardians… 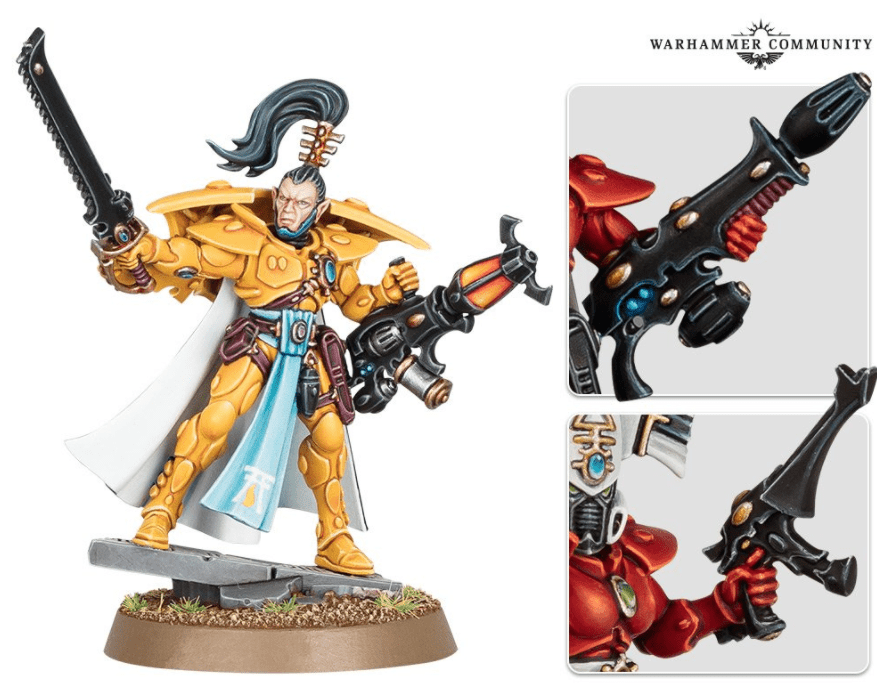 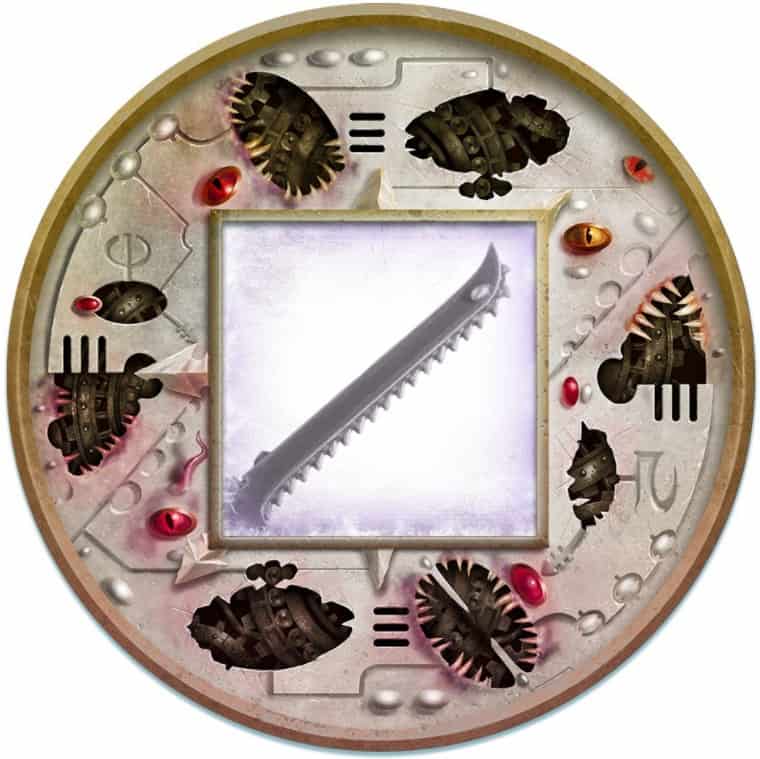 Day 12 of the advent engine is also here, but this one is notably more Slaanesh. Curved swords typically represent more finesse, something that Slaanesh definitely has over the other Chaos gods.

Perhaps this is a sign for the next set of updates coming to the Emperor’s children as the defacto Slaanesh CSM chapter… We would also mention Drukhari, but unfortunately, they don’t use Chainswords at all.

It could also be for a Striking Scorpion too…

In a weird kinda way, this one was way off from our prediction! However with the new Autarch having so many options its not likely many people got this one right either! 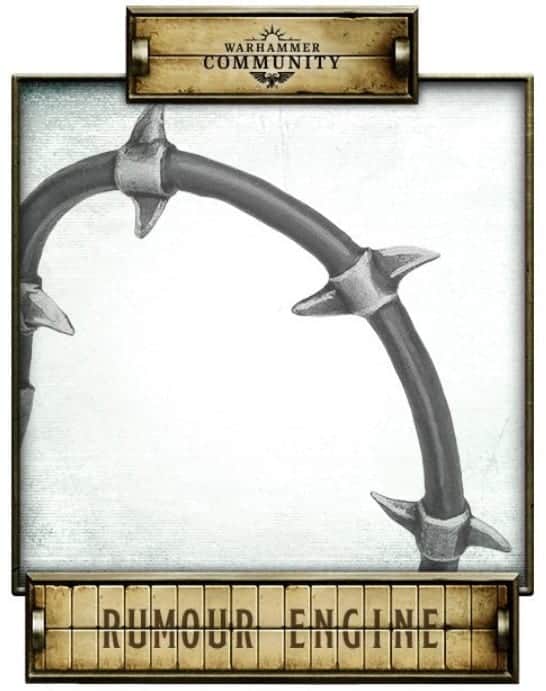 With nearly a month without a normal Rumor Engine, it looks like this time they are easing us back in with an easy one! There’s only really a handful of factions that even use whips! Slaanesh, Drukhari, and Daughters of Khaine…That being said, Slaanesh Daemons might enjoy the love!

Last but not least of the newly solved engines is this whip and lucky for us we got this one right! A new Daughters of Khaine model is on the way! 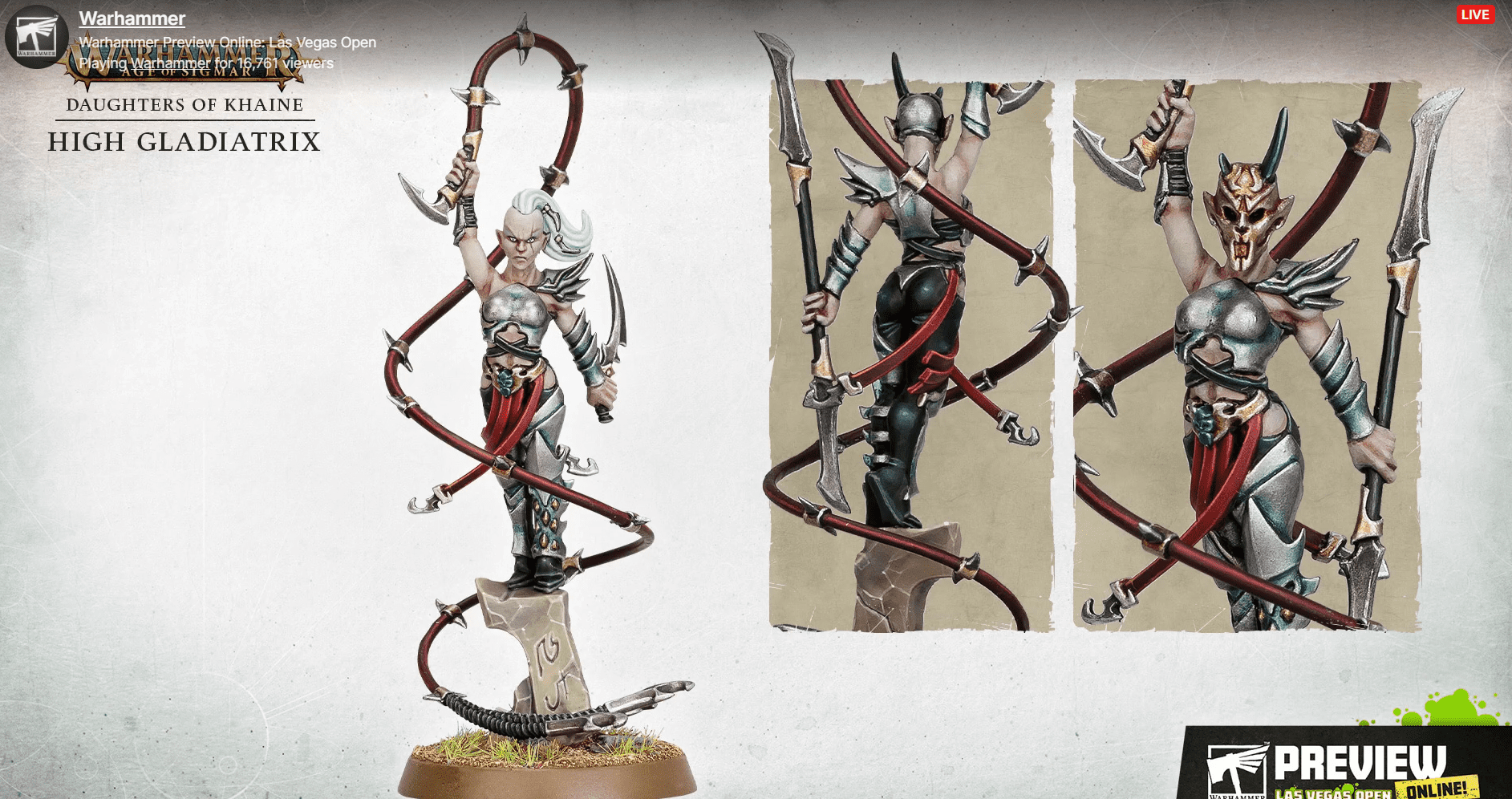 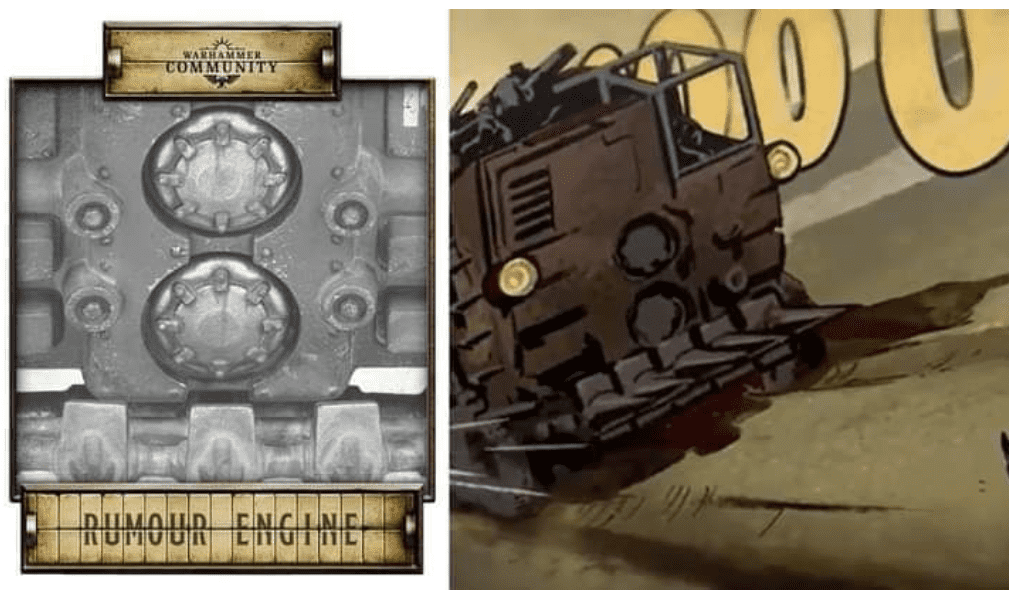 While not 100% confirmed yet, this is probably on point.

We also know GW does not like to make art if there aren’t minis, the pic on the left is from a recent Rumor Engine, and the pic on the right is from the recent trailer. They match up pretty perfectly, and from the looks of it, the model will be really close to the artwork.

What GW rumor engines do you think we will see solved next? 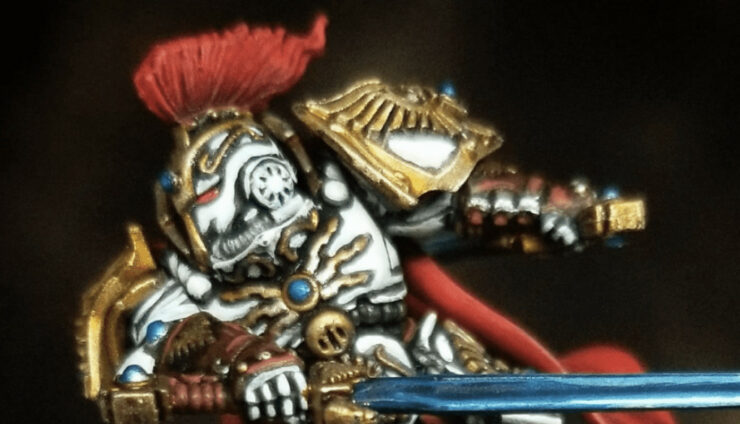 PREV ARTICLE
« Champion of the Blade: Army of One 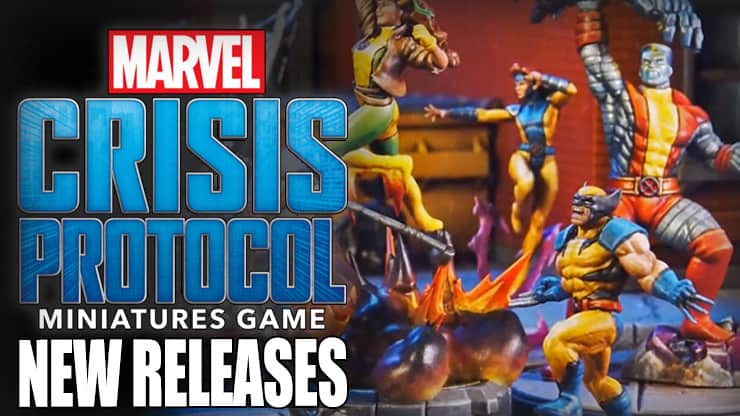 NEXT ARTICLE
Tons of New Marvel Crisis Protocol Models Available »
If you buy something from a link on our site, we may earn a commision. See our ethics statement.